When your computers are toiling around the clock, you don’t have to heat the studio, because heat is a byproduct of busy machines. And for artist Alex McLeod, his studio has never been busier, right now churning out the thousands of digital jigsaw pieces – a thicket of green, next a rocky face, then the elbow formed where a tree branch joins its trunk – that will eventually become the largest digitally printed image anywhere in the world.

Best known for his sumptuous 3-D-rendered landscapes and animations, the 33-year-old Toronto-based artist was the winner of a competition to develop integrated artwork for Metrolinx’s Davenport Diamond Guideway – an overpass structure in the city’s west end that will carry commuter rail lines over freight tracks, separating what is now a choked-up crossing where the lines intersect.

When it opens in 2022, McLeod’s work, titled Secret Park Gate, will clad the exterior sides of the noise barriers to be erected as part of the overpass. The 1.4 kilometre-long mural will feature a series of six scenes, responding to the built urban environment around the rails. Where the Guideway passes the eastern edge of Campbell Park, for example, the artist has designed a jubilant winter landscape where conifers rise between towers grown into mathematical shapes such as crystal spars and optical prisms. It is a vision of the world either 100,000 years in the past or 100,000 years into the future.

Besting a shortlist that included Canadian and international heavyweights Jon Rafman, Jacqueline Poncelet, Martin Creed and Frank Stella, McLeod’s submission was selected for its mindfulness of how art might be incorporated harmoniously into the neighbourhood, explains Laura Berazadi, Metrolinx senior adviser for Integrated Art. Where the overpass butts against buildings or passes close to residences, the design quiets; where the space opens, inviting high-impact, landmark moments, McLeod lights the fireworks.

McLeod grew up in Scarborough, Ont. When he was a kid, he says, his family didn’t really go to museums. How could he even relate to the work of someone like Picasso? “It was like: ’I don’t know what this French dude sipping absinthe has to do with my experience over here drinking soda in the food-court Taco Bell,’” he says.

Rather, McLeod credits another transit landmark, the Graffiti Knights’ “East Side” wall, a mural covering an entire wall just north of the Lawrence East stop on the Scarborough RT transit system, as one of his entry points into art. The RT mural, with its stylized faces and decorative script, made art part of his everyday environment. The opportunity to put his own touch on the community where he now lives and works attracted him to the Davenport Diamond project.

In McLeod’s visual world, everything wears jewelry. The trees are filigreed, clouds are gilt and mountains are treated like Fabergé eggs. “I’m interested in conveying a sense of joy,” he explains. The Christmas ornament is an important aesthetic and conceptual reference for him. Toronto painter Tessar Lo says that when he thinks of McLeod and his work, he thinks of the word “flourish.”

Across its six scenes, Secret Park Gate traverses a range of imaginary landscapes, through woodland and metropolis and geometric fantasy. McLeod calls it a portal into an alternate place. “It suggests what could have been and what might, one day, still be.”

His goal is to create an empathy toward space; to form a connection within the viewer between the past, present and future of the land. The decoration and trimming imply that our space is, like an ornament, an heirloom that deserves to be cherished.

Despite the scale of the massive project, McLeod says the physical size of the blank page isn’t what frightens him about the assignment; it’s the virtual enormity that’s daunting. Even the smallest scene amounts to a 30-gigabyte file. And because an integral piece of hardware is on back order, he can’t add power. So, at all hours, it’s full steam ahead (and pleasantly warm in his converted garage studio for March).

To make the project manageable, the various scenes have been tiled into roughly square-foot sections. The computer processes them one at a time. When the rendering is finished and the files have been stitched and printed onto metal substrate, McLeod will have built a landscape that nearly stretches the five to eight city blocks (depending how you count them) from Bloor to Davenport.

“But right now,” he chuckles while zooming in with his screen so it’s filled by the very tip of an evergreen, matching the progress display of another nearby monitor, “we’re working on this tiny piece here.” 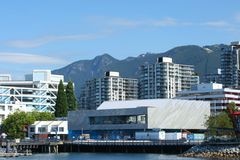