It could have been so much better.

The MOCCA's big summer exhibition, trans/FORM: Matter as Subject > New Perspectives, is an at times wonderful, at times frustrating showcase. (Note: 1980s revivalism has spread from pop music and fashion to art exhibition titles, which probably spells the death of the revival.)

Built on the premise that young artists are rediscovering the value of materiality, especially in painting and sculpture – i.e. they are making works that emphasize the tangible, from actual physical stuff (paint, plaster, cement) that you can see and touch and smell – trans/FORM is positioned as a survey of the keenest adherents of the New Materiality. As the press release claims, the exhibition offers us "artworks whose meaning and essence are revealed through the materials from which they are made."

Great idea. Why, then, does trans/FORM frequently seem so blank, vacant, and wholly absent of the very thing it purports to be selling?

To be clear, I am not arguing that an exhibition that prioritizes materiality ought to be loud, a crazy quilt of textures and colours, splashy and fibrous. But on the other hand, it's difficult to see the material focus in works that appear to do everything they can to underplay the ingredients from which they are made.

Cases in point, the mixed media works of Hugh Scott-Douglas as well as those of Aleksander Hardashnakov.

Scott-Douglas presents a pale block of linen that has been flattened with gesso and laser-cut with hundreds of little holes – holes that create a splotch. Not an interesting or particularly lively splotch, just a splotch. It looks like a faded mustard stain. Alongside this work rest three inkjet printed squares of vinyl that have been mounted on dull aluminum. The aluminum non-entities are dolled up with some door framing hardware and bolts and such. The printed vinyl resembles an oil slick, or an oil slick that needs just one more good swipe to wipe it off.

Scott-Douglas's work here is about as visually arresting as a smudge on a drinking glass, and deserves the same amount of attention. This is not an example of embracing materiality, but of negating it (which is arguably a type of engagement, but I'll leave that for the theory heads). There is simply not enough to look at.

Equally boring are Hardashnakov's alleged paintings, works so devoid of life, movement, colour, light, tactility and ideas that they appear to be evaporating. Hardashnakov's routine is a resurrection of late 1970s minimalism, a la Robert Ryman or Agnes Martin, works which must seem terribly fresh to anybody under 40 (which all of the artists in trans/FORM are, by curatorial conceit) but, to those of us who endured it the first time, arrives already bagged and tagged.

Take, for instance, Hardashnakov's black-and-white assemblage/painting, consisting of one fat strip of parched white canvas over which a narrow strip of flat black canvas sits, draped like a wrung-out tea towel. Or his series of zombie pale canvases under-augmented with threads, some faint shapes created with tempera and concrete dye (you'd think that would pack a punch, but no) and, of course, acres of numbing gesso. Again, there's nothing to see here folks, move along.

Perversely, Hardashnakov is a finalist for the 2012 RBC Canadian Painting Competition prize. Perhaps Bev Oda inserted one of her infamous "nots" between the Canadian part and the Painting part, and the jury got confused?

Now for the good stuff, the works that actually live up to the curatorial promise.

Sasha Pierce's pulsing, vertigo-inducing paintings, composed of interlocking streams of fussily mixed oils piped onto linen, seem to hum as you pass them, vibrating with life. They don't hang off the wall so much as levitate. Similarly, looking at Niall McClelland's massive photocopies of black paper that has been folded and refolded until the white fold lines make dizzyingly complex matrices is like entering a Saul Bass opening film credit sequence. Stand back and enjoy the funhouse ride.

But the showstoppers in trans/FORM, hands down, are the mad, buoyant sculptures created, respectively, by Derrick Piens and Jaime Angelopoulos.

Piens's makes blobs: brain-like blobs, asteroid-like blobs, actual blobs of coal – all in distress. His brain blob, for instance, rests on what appears to be a nest of desiccated, ghoulish bones. His asteroid blob has been impaled by a tall, square spike. On a shelf containing three beach ball-sized blobs, one is slathered over with dusty pink paint, another boasts bevelled sides painted in a bloody orange, while the aforementioned lump of coal wears a messy hat made from a scrunched-up ball of fabric painted hot green and pink. Clearly, Piens enjoys his work. His playful creativity is infectious.

Equally lively are Angelopoulos's enormous mixed-media squiggles, sculptures that resemble giant sea creatures let loose. The visitor is first menaced by a massive, icky lavender pink worm with a white bulb growing out of one end and a giant, yellow-fabric feather duster out of the other. Around the corner, the pretty/icky companion piece looms – a tall, sickly pink spike covered in fat spines, a monster hunk of coral.

The contrast between the spare, enervating works and the nutty, showy works is so bald, it becomes a harsh object lesson for the exhibition's lesser lights: Focusing on materials as signifiers without paying attention to the actual visual impact of the finished work – the eye-candy factor – leads to dry, academic formalism.

Basically, if the work looks boring, it is boring. Conceptualist-materialist inter-textuality blah blah be damned: Concrete and gesso are never enough.

Last chance to catch this unique and ought-not-to-work-but-works collaboration between ace draughtswoman Mishchenko and ace foil-and-paste glitter fiend Plotnikoff. These mixed-media works shine with such gemstone intensity, you want to wear them around your neck.

Prophet's Synthecycletron, a noise (or music, depending on your tastes) machine powered by you, the visiting cyclist, bleats, tweets, zings and bumps, according to your leg power, hip swivels, and, one suspects, sense of adventure. 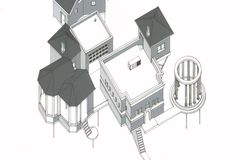