What fantastic timing for biographer Walter Isaacson: His 600-page bio of Leonardo da Vinci was published a few weeks before Leonardo was all over the news because of the record-smashing sale of Salvator Mundi. Isaacson devoted much of a chapter to this painting, arguing for its authenticity and its genius.

In Toronto for a book talk, he said to me on the phone: "The painting was heavily restored but it's still a compelling work of both art and science. The way he does sharpness, perspective in Jesus's blessing hand, and the way he shows the miraculous quality of Christ, the saviour of the world, by having a crystal orb that doesn't distort his robes, makes it a painting that is very thought-provoking as well as beautiful." This largesse is typical of Isaacson's views and of his writing. The orb's distortion, or lack of it, has actually been used as an argument against the painting's authenticity. An image seen close-up through a glass orb would actually be upside-down. This one isn't. Leonardo was sufficiently preoccupied with such mathematical issues of representation that he would have known this; it is exactly the kind of virtuosic trick he liked to pull off. Why didn't he? Isaacson has a quick answer: Of course, it was a deliberate representation of the miraculous.

This is a bit far-fetched, but Isaacson is a Leonardo booster; he will turn even a mistake into evidence of genius. It's a term Isaacson admits is a dangerous one; the label, he writes, "… oddly minimizes him by making it seem as if he were touched by lightning." And yet genius Leonardo is. "I think Leonardo was a genius," he says in our interview, "not because he had the mental processing power of a superhuman brain like Albert Einstein, but he was a genius because he was passionate about learning everything in every field of knowledge and was able to spot the patterns, whether it was swirling water and rivers [that he used in] the Mona Lisa, or it was heart valves – he saw a pattern like a spiral and creatively applied it across disciplines. He was just passionately curious, observant and open to wonder… We can learn from Leonardo just to be more observant and more curious."

What we can learn from Leonardo constitutes the peculiar last chapter of this otherwise sober and cautious biography. At its end Isaacson moves from his role as historian into something closer to self-help guru. He lists a set of Leonardish attributes for us to emulate that sound a lot like advice to tech startups: "Retain a childlike sense of wonder… Think visually… Avoid silos… Collaborate…" Add this to repeated comparisons to Steve Jobs, a previous biographee of Isaacson's, and one is reminded that this is a very American biography (Isaacson was managing editor of Time magazine for years), one that sees "creativity" as primarily a corporate asset.

If Leonardo were alive today, I ask Isaacson, would he have been a startup entrepreneur? He demurs. "Leonardo was not driven by money as much as some other people of the time were. In fact, he sometimes doesn't deliver his paintings when he's not satisfied with them, and gives up his commission…. He wasn't the type of person who would do a startup that was driven by financial considerations."

Leonardo, Isaacson thinks, could have in fact learned a thing or two from Steve Jobs: "Real artists ship" (i.e. deliver) was Jobs' maxim, but Leonardo often fiddled with things for years. "He starts some paintings," Isaacson says, "like the Adoration of the Magi, or St Jerome, and doesn't finish them. He was not a successful businessman. But fortunately he knew a lot of successful businessmen. Even like the cloth merchant who commissioned the Mona Lisa – Leonardo keeps it for 16 years to perfect it and never delivers it and never collects the money for it."

Paradoxically, this book is at its strongest when not getting rapturous about the mystery of perfection or the nebulous idea of genius. It is most illuminating when discussing Leonardo's troubles and weaknesses. Isaacson's primary source was the 7,200-odd pages of Leonardo's notebooks, written in left-handed mirror script (it's easy to read even without a mirror, Isaacson claims). And over the four years he spent with them he came to an understanding of the man's foibles. He says, "After reading his notebooks page after page, and looking at things like him doing a recipe for making blonde hair dye when he was in his 30s, you realize he was worried about going grey. Or doing a drawing of a human heart and on the last page of those drawings getting distracted and instead of finishing it he draws a picture of [his lover] Salai around it… You say: How wonderful it is that he's so human." 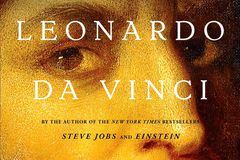 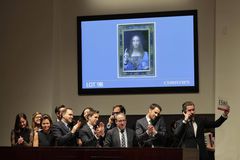