Not far from the Peace Bridge, at the edge of a gritty and dangerous neighbourhood, lies a vast tract of land on the edge of the Buffalo River, where century-old grain elevators loom like ghosts from the past. The ships that once pumped barley and wheat from the prairies into the concrete bellies of these marvels of engineering have all but disappeared. White deer and egrets now gather on the shores of the murky river. In one of the silos, giant hoppers in rusted metal fill a series of perfectly round rooms, each one a miniature concert hall. If this were New York or Venice or Toronto the artists and videographers would have already moved in.

The bees took over years ago. They infiltrated a crumbling office building on the site and built a honeycomb castle for their queen that climbed six feet high. It was an act of exquisite architecture that deserved another, this time by University at Buffalo graduate architecture students who have recently unveiled an iconic new hexagonal tower for the important work that honey bees do. Their competition-winning design stands almost seven metres tall in the middle of the urban wasteland, sunlight reflecting from its textured stainless steel – a beacon of urban regeneration.

The rapid advance of urbanization, and of pesticides, has devastated the bee population in North America. And yet bees should be revered as crusaders for the environment. Through pollination, bees are responsible for more than 30 per cent of the food that we eat. They produce pure honey despite toxins that their bodies absorb. Against all odds, and with a life span of barely a few weeks, they soldier on. Here, where wildflowers and clover grow in abundance in the postindustrial landscape, the bees are happily productive. Since being tenderly released by local beekeeper Philip Barr into their new home earlier this month, the bees have already generated a substantial, life-giving beehive.

"Honeybees are not a convenience; they're a necessity," asserts Barr, who tends to several beehives in Buffalo, usually wearing a T-shirt and shorts. Urban mythology would have us believe that bees are to be feared. In fact, wasps sting, not bees. Armed with this information, it's easy to approach the totemic beehive and duck your head into the entrance, then look up to where a miniature room, lined in cypress wood, has been suspended within the steel structure.

Bees buzz around, minding their own business, exiting through perforated holes when they need to gather more pollen, returning to the beehive to contribute more wax cells to the highly efficient hexagonal structure. Looking up through the Plexiglas bottom of the wooden vessel, it's possible to gaze – for my first time – at the intense construction going on, bees hyperfocused on creating their hexagons, the collective moving to fill a void with their heavenly substance. Given a chance to observe one of the greatest of nature's masterworks, it seems to me that time has simply stood still.

Set against the mammoth scale of the grain elevators, the contemporary beehive totem looks like a piece of minor surrealism. But, as an educator about new form and new life, it's a major opus.

Behind every powerful work of architecture, there's a visionary client. In this case, that's Richard Smith, the owner of Rigidized Metals, a local company that manufacturers the textured stainless steel used in the sculptural tower design. He drives up to the beehive in a 1973 Oldsmobile convertible and struts over in a cowboy hat and boots. His factory sits a stone's throw from the complex of silos, three of which he owns. It was Smith who decided to sponsor the beehive design competition, with one hope: that students use his stainless steel, innovated in woven patterns by his family back in the 1940s, and most recently used to reclad the Javits Center in New York.

Smith says he was amazed when ten teams of students signed up for the competition. The grain-elevator site was toured and the beekeeper advised them. A jury was organized, teams were short-listed and, finally, the winners were selected. Kyle Mastalinski, Scott Selin, Courtney Creenan, Lisa Stern and Daniel Nead were classmates enrolled in the masters program in architecture and planning when they took on the project, outside of their regular curriculum, designing late at night and working closely with the metalworkers at Rigidized Metals.

Their design exploits the honeycomb's hexagonal structure, not only for the shape of the actual tower and its stainless-steel panels, but mirrored in the randomized pattern of perforations. It's both a fractal and a mirror of nature.

Walking through the magnificent city of silos, keen to discuss ways that artists might be enticed to come work here, Smith expresses his commitment to regenerating the site through small, meaningful gestures. "What better way to start than with beehives? You don't need 400 master plans. This is small, but it works."

It's almost evening by the time our meeting and tour of the grain elevator site comes to an end. That's when I drive across town to one of Frank Lloyd Wright's residential masterpieces, the Darwin D. Martin House Complex (1907), a series of five interconnected, hovering brick pavilions that seriously anchor the leafy Parkside neighbourhood and its grand, elegantly coloured wooden homes. A massive, multimillion dollar restoration of the once-crumbling complex is nearly completed; as part of the site's sophisticated regeneration, a luminous visitor centre by esteemed American architect Toshiko Mori has been constructed.

Wright devoted his career to creating symbiotic relationships between architecture and nature. And he admired the genius of the beehive. He once designed the Hanna House in Palo Alto, Calif., based on a honeycomb module, and wished his clients well when he said, "I can see you two imprisoned like two bees in your honeycomb."

That Wrightian wish, I believe, was surely intended as an enchantment. 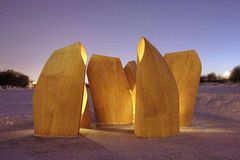 Five medal-winning houses to write home about
May 11, 2012 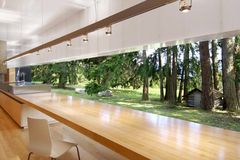 At the United Nations, updating a modernist icon
April 30, 2012