In an interview with Kirstin Evenden last September, the Glenbow Museum president and chief executive officer exuded confidence and optimism. There was an exciting show opening at the end of the month – Fairy Tales, Monsters and the Genetic Imagination. And planning for a new facility for the Glenbow was still on track, she said, even in the wake of summer layoffs and a decision to close the museum on Mondays in a cost-saving exercise.

"The current financial challenges should not impede our ability to think about the future, and in fact the actions we took recently are about the future. They're about securing a financial future for the organization," said Evenden, immaculate in an ivory pantsuit.

Hours later she participated in an annual general meeting where it was revealed that the Glenbow had posted a $1.67-million operating deficit for 2011-12.

"I'm excited about the potential of what Calgary could be and what Glenbow could do for Calgary in the long term," she said.

For Evenden, the long term was cut short last week when she resigned her Glenbow post after 19 years with the institution, nearly four at the helm. Her resignation followed a vote of non-confidence in her leadership by unionized workers at the Glenbow, whose Canadian Union of Public Employees local then sent a letter to the museum's board.

The Glenbow is characterizing the change at the top as a fresh start. "[It is] a unique opportunity to reset and refresh its place of significance in the arts and culture community," says a news release announcing the resignation, and the appointment of Donna Livingstone as interim president and CEO.

"Glenbow's in its 40s, when you tend to make an assessment of where you are and where you want to go," said Livingstone, a former vice-president of program and exhibit development and board member with the Glenbow, in an interview this week.

"I also look around at Calgary and see how much it's changed. So Glenbow's role in that has changed. So how can we be relevant and connect with the new Calgary?"

A few months before the Glenbow bombshell, a troubled portrait of the Art Gallery of Calgary (AGC) – not quite two blocks west – began to emerge, with a lawsuit, and later criminal charges, brought against Valerie Cooper, the AGC's former president and CEO. In a civil suit filed March 30 by the AGC, Cooper was accused of bilking the institution of nearly $500,000.

These were not the kind of developments the city might have envisaged for 2012, its year as a cultural capital of Canada.

Calgary, with its booming economy and determination to prove itself as a cultural force, has a visual arts deficit. While Edmonton enjoys the sparkling, not-quite-three-year-old Art Gallery of Alberta, Calgary's chief art facility is a museum with an identity crisis stuck in a lacklustre facility; the AGC is embroiled in a case of alleged fraud; a high-powered collaboration to build a new contemporary art gallery has fizzled; and that once-exciting promise of housing the country's National Portrait Gallery is a memory, with the project quietly scrapped three years ago. It's not a pretty picture.

And yet with its thriving theatre community, exciting new works commissioned by its opera and orchestra, and a provincial ballet company attracting international attention, the city has demonstrated a remarkable cultural appetite. Thousands came out for the inaugural Nuit Blanche this year. There's a new $132-million National Music Centre in the works, with a groundbreaking scheduled for the first quarter of 2013 and an opening for 2014. Calgary Mayor Naheed Nenshi is famously arts-friendly. How is it that a great visual art museum has eluded this place?

"What you're seeing here is the transformation of the city from a teenager to something more mature," says Daniel Doz, president of the Alberta College of Architecture and Design. "There's a deficit [for] a city of this size in terms of the large [cultural] infrastructure," he adds. "For a city like Calgary that wants to play an international role, there's a definite need and you're starting to see a thirst for it."

The Glenbow has for many years struggled for an identity as part museum, part art gallery, part library and archives. In 2009, the museum – housed off a lobby, deep inside a 1970s Brutalist building – began a strategic planning process that resulted in identifying six key priorities, including to "develop a vision and plan for a new facility that meets the needs of our visual arts program."

There are other places to consume art here, including the Alberta College of Art & Design's Illingworth Kerr Gallery, which does cutting-edge programming. The University of Calgary's Nickle Arts Museum reopened last month in an impressive new location as the Nickle Galleries. The Esker Foundation opened its doors to oohs and ahs last June; it's an airy 15,000-square-foot home for philanthropists Jim and Susan Hill's vast art collection. There are excellent artist-run centres, good private galleries, and the Museum of Contemporary Art Calgary.

Rebranded MOCA by artistic director Jeffrey Spalding, the facility does its best, but is restricted by its too-small, awkward space. Connected to Calgary City Hall, it's convenient, certainly, but it's not the right kind of space to realize Spalding's ambitions.

Spalding, who was Evenden's predecessor at the Glenbow before his abrupt departure in 2009, is very keen to be involved in the creation of a new contemporary art gallery.

In January, MOCA and the Institute of Modern and Contemporary Art (IMCA), announced that the two groups had signed a memorandum of understanding and were reviewing a shortlist of potential locations for a new contemporary art museum, and that a joint steering committee would develop an implementation plan for a new facility and the establishment of a charitable foundation to fund it.

But this collaboration has quietly dissipated, according to Spalding.

Whoever runs it, it's pretty clear: A contemporary art museum is overdue for Calgary, and for many people, it's high on the cultural agenda.

"I have no doubt in my mind that we're underserving that part of our cultural scene in Calgary," says Terry Rock, president and CEO of Calgary Arts Development Authority, a city-owned corporation which, among other things, provides grants to local arts groups. "The big challenge when you're sitting in my seat is operating dollars are not easy to come by, and in the current environment it's very difficult to see where they're going to come from."

George Brookman has an idea. The past president and chairman of the Calgary Stampede co-chairs an organization called Transformation Calgary, which proposes adding 1 per cent locally to the goods and services tax for a limited time to fund specific cultural and recreational projects, to be identified and voted on in a referendum. The group, which models the so-called penny tax idea after an Oklahoma City initiative, hopes to have at least a general question about the idea (which requires federal and provincial approval) added to the municipal ballot next year.

"The best art shows in the world fly right over Calgary because we don't have the facility," Brookman says. "We're supposed to be the boom city and the richest city in Canada. There's got to be a better way."

Spalding, who says he runs MOCA Calgary on an annual budget of between $300,000 and $400,000 (about half of which is in kind, such as forgiven rent and building services), says financial restraints are a tremendous problem for Calgary's art institutions.

"All of us are doing tea and bake sales and casinos and bingos and everything else except running an art museum," he says. "Something has to give – whether it's more money coming in from somewhere, or the money may have to be rationalized in a different way."

Collaborations, he says, could be the key.

"Government is only one part," Alberta Culture Minister Heather Klimchuk said on Tuesday, about the question of funding. "When the community supports it and the private sector, you know, that's when the magic happens. Because it's the buy-in from everybody."

Klimchuk points out that the Glenbow received a 7-per-cent increase in funding from the province last year. Deliberations for the provincial budget next year are under way.

Livingstone, who is on leave from the University of Calgary until March, isn't pulling the plug on anything yet, but she isn't plowing ahead either. It's early days; she hasn't even completely figured out the phone system, let alone determined whether the Glenbow should go ahead with its vision for a new building.

"We have an ambitious strategic plan right now," she says. "We need to go through that and identify those areas that are really resonating with the community."

Almost every Calgarian I meet is upbeat and optimistic about the city's cultural potential – shaking off the monsters and going with the fairy tale. There is not just an appetite, but tangible growth. Rock points out that when CADA took over its funding role in 2007, it funded some 120 organizations. That number has now jumped to more than 190. At ACAD, Doz says more graduates are choosing to stay in Calgary, whereas not that long ago they would have had to go somewhere such as Toronto, Montreal or New York for their careers.

"I look at all this next generation and they're very impressive and exciting," Rock says. "So if people think that because there's no gallery, there's no contemporary art here, it's just not true."

Kirstin Evenden out as head of Calgary’s Glenbow
May 9, 2018 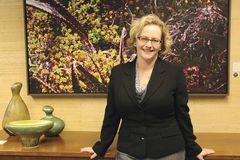 Glenbow snares major Petra exhibit
April 22, 2018
Glenbow Museum departure surprises Calgarians
April 28, 2018
Follow Marsha Lederman on Twitter @marshalederman
Report an error Editorial code of conduct
Due to technical reasons, we have temporarily removed commenting from our articles. We hope to have this fixed soon. Thank you for your patience. If you are looking to give feedback on our new site, please send it along to feedback@globeandmail.com. If you want to write a letter to the editor, please forward to letters@globeandmail.com.
Comments