A work by a Canadian Haida artist has been installed at the Metropolitan Museum of Art in New York in a location where contemporary art borders Indigenous art, and the curator who orchestrated its installation is thrilled about it.

Michael Nicoll Yahgulanaas's Yelthadaas, recently acquired by the Met, hangs in Gallery 399, at the intersection of two worlds. Installed last month, it is in a long exhibition space on the first floor, between the Modern and Contemporary Art wing and the Rockefeller Wing, which houses the Arts of Africa, Oceania and the Americas. It opens into Gallery 356, where you will find work by Indigenous artists from the Pacific Northwest.

"Yelthadaas" is a blend of a Tlingit and Haida name, Nicoll Yahgulanaas explains. It means white raven and it is a name that once belonged to the artist. The work is from his Coppers from the Hood series – pieces made from the hoods of cars, in homage to the Haida coppers which are traditionally exchanged during potlatches. The contemporary piece, made using the hood of a Toyota Tercel, hangs across from a Sol LeWitt drawing. There's a Jackson Pollock painting around the corner. And around a different corner is a 19th-century ceremonial Tlingit copper from Alaska.

The work is from his series Coppers from the Hood – made from the hoods of cars in homage to Haida coppers, which are traditionally exchanged during potlatches.

"It's an amazing kind of location for the work," says Ian Alteveer, curator of the department of Modern and Contemporary Art at the Met. "Because you can see its relationship with contemporary art from non-Native American people. But you can also see it relate to historical collections in the museum."

Alteveer was keen to install the work across from the LeWitt, an India-ink wall drawing from the 1980s, which is on loan to the museum. The black-and-white graphic, he says, complements Nicoll Yahgulanaas's Haida Manga style, which is evident in Yelthadaas (The artist is well-known for his graphic novel Red: A Haida Manga; a follow-up, War of the Blink, is being published this fall).

"I'm liking that they placed it in that context," says Nicoll Yahgulanaas, who describes himself as an artist who happens to be Haida, among other things. "Its location really speaks to breaking out of [what] I'm calling the ethnic filter … the constraints that are constructed around the 'imaginary Indian.' By having it in the hallway, I think it really gets to where we're going."

Alteveer, now a fan – even a champion – of Nicoll Yahgulanaas's work, was not aware of the artist prior to 2014. He was introduced to his work during preparations for the Met's show The Plains Indians: Artists of Earth and Sky, by that exhibition's organizer Judith Ostrowitz. She has a great interest in contemporary art made by Indigenous artists and, while on staff at the Met, she spent time introducing contemporary curators to some of this work.

"I got very excited in this case looking at Michael's work," Alteveer explains. Ostrowitz connected him with the artist, Alteveer learned that there were some works available and the acquisition of this piece from 2010 was approved and arranged. "Everyone around the table was excited about this work," he says.

Yelthadaas was acquired in 2015, always with the objective of display.

"When we were working on this gift, I know it was important for [the artist] that it not just go into storage," Alteveer says, adding that this is generally the case, of course. "My department has some 13,000 objects and there's probably only some few hundred on view at any given time. So it is a challenge. But it was important for me in this instance."

With the LeWitt installed – on loan from the artist's estate – and the Tlingit copper on the wall in the adjacent gallery (things get rotated through in the museum), Alteveer felt this was the right time and the right spot. "It's a wonderfully rich context for Michael's work."

He consulted with a colleague working in Arts of Africa, Oceania and the Americas, who agreed.

"We like to be collaborative especially with regard to galleries that are kind of on the threshold," says Alteveer. "Are there ways in which we can make the passage more fluid for the visitor from viewing works from the 19th century and the Pacific Northwest into modern and contemporary art? What responsibilities do we have there? How can we enrich the story? And this is a great way to do so."

Yelthadaas was installed in July. The LeWitt loan has been extended through the end of January, so Nicoll Yahgulanaas's contemporary copper is likely to remain on display at least until then.

The artist is scheduled to be in New York in November for some work with the American Museum of Natural History. He is, of course, planning a visit to the Met.

"I'm hoping it's still there because I want to see it hanging," he says. "It would be sad to miss that." 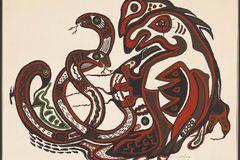 The bold future of Indigenous documentary cinema
April 20, 2017
Follow Marsha Lederman on Twitter @marshalederman
Report an error Editorial code of conduct
Due to technical reasons, we have temporarily removed commenting from our articles. We hope to have this fixed soon. Thank you for your patience. If you are looking to give feedback on our new site, please send it along to feedback@globeandmail.com. If you want to write a letter to the editor, please forward to letters@globeandmail.com.
Comments