It’s rare that a new Canadian building appears on a postage stamp, but there it was on letters this month: the Canadian Museum for Human Rights, looking heroic in profile. The Winnipeg building is both the container and the physical face of this new national museum. It is one of the most anticipated works of architecture in Canada’s history.

It is not one of the best. When New Mexico architect Antoine Predock won the job a decade ago, the building was meant to embody the museum’s high aspirations. Instead, it is a monolith of mixed metaphors – a monument to the vagueness that defined the institution at the start.

The museum, designed by Predock with Winnipeg’s Architecture 49, opens some of its galleries on Saturday. It enacts a symbolic journey upward to light and hope. You enter at the base, between the Roots – great masses of Tyndall stone and concrete; move from a subterranean Great Hall up to the Mountain, a double stack of boxes that contain the galleries; and follow a Trail of Light up to the Tower of Hope. From there you go down an elevator to the Garden of Contemplation, which stands at the base of an atrium and a 23-storey-tall glass Cloud. You’ll pass the gift shop on your way out. 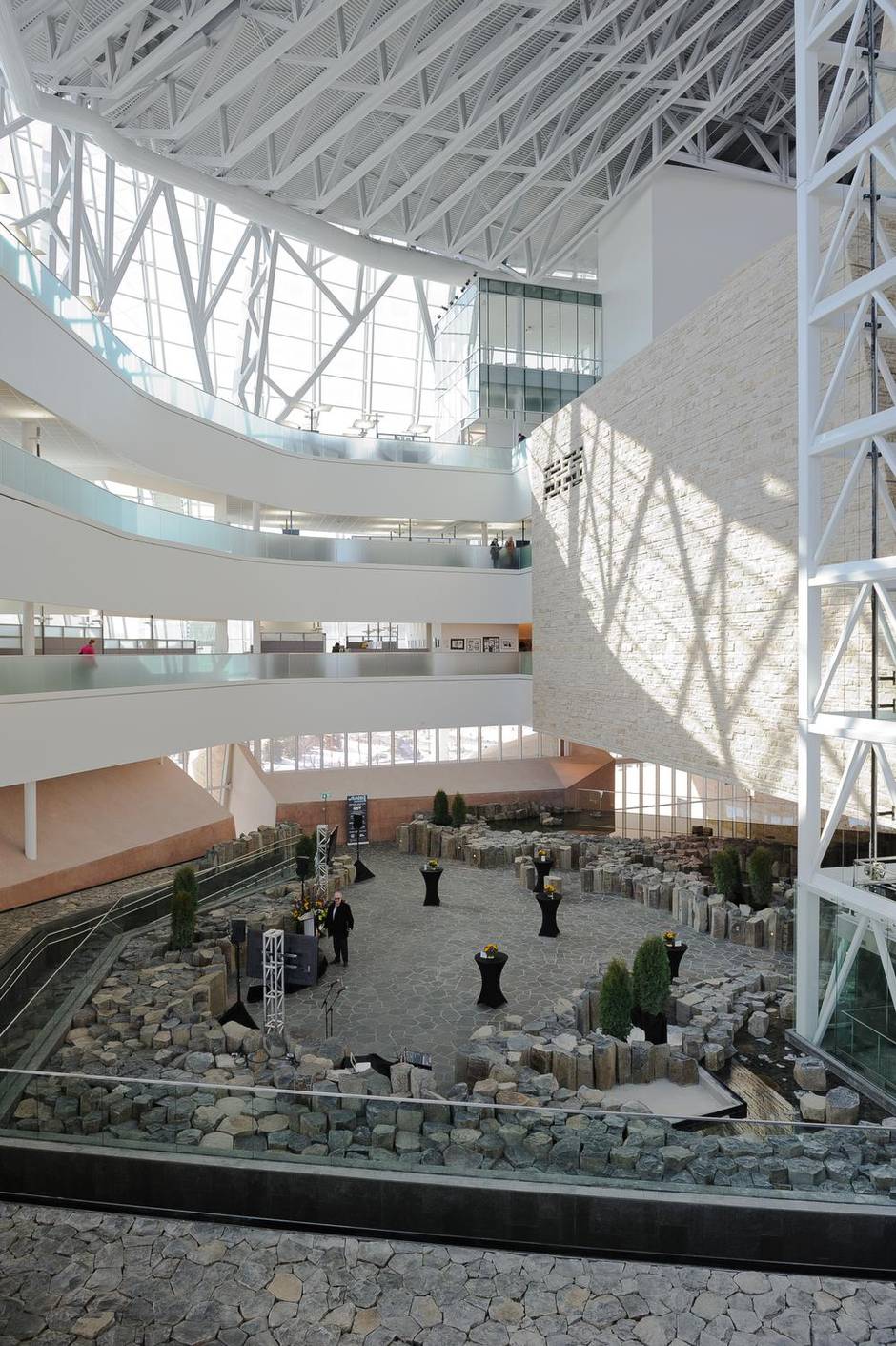 The language of the interior is varied: The materials range from silky plaster to rough concrete, and the mechanical innards of the structure are frequently exposed. “There’s no fancy finish, no detailed surfaces that will conceal the innards of the building,” Predock, 78, told me during a tour of the building before its opening. “I like that there is that raw power.” Details are incidental; this building is designed to move you through space, upward and onward, in what Predock casts as a “kinaesthetic” experience. The most compelling moments come as you pass between the galleries; you cross back and forth across a 170-foot-deep void on bridges wrapped in Spanish alabaster, the stone illuminated by hidden LED fixtures. This “alabaster labyrinth,” as Predock calls it, is visually and conceptually powerful. It is also fancy and highly detailed.

But it is just one volley in a barrage of spatial and material choices, which were overwhelming even before the galleries were filled. On our tour, Predock called this “purposeful chaos” – then tried to walk that remark back. But chaos it is. 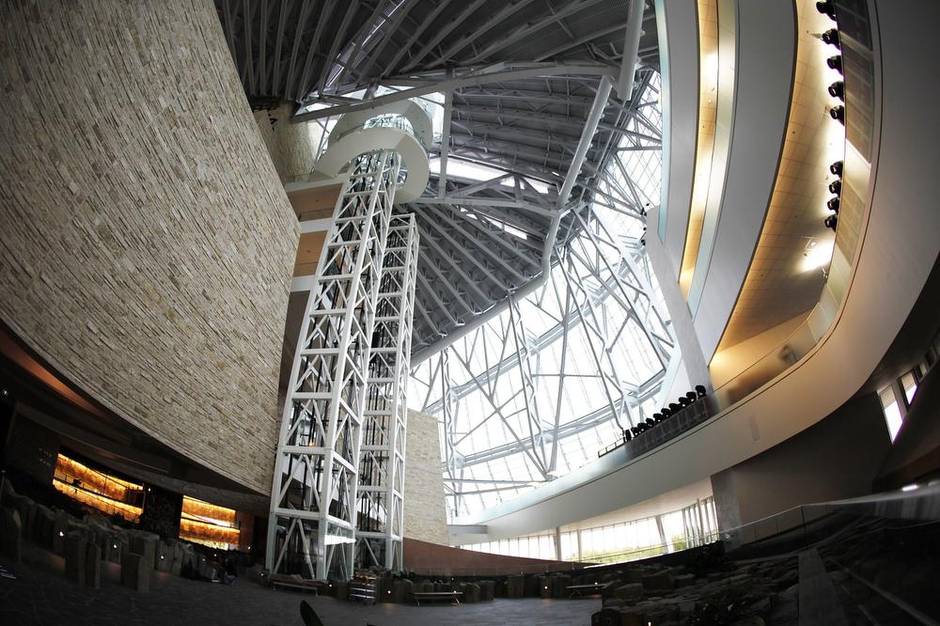 When New Mexico architect Antoine Predock won the job a decade ago, the building was meant to embody the museum’s high aspirations. (John Woods/The Canadian Press)

How did this come to be? A lack of institutional vision. Predock won an international competition to design the building in 2005, when the museum did not yet have a permanent leader, status as a national museum, or clear sense of what, specifically, it would contain. The CMHR’s backers, led by Gail Asper, daughter of its late founder Izzy Asper, gave the architect freedom to design an iconic building into which they could insert a program. The aspiration was to give the city an instant global presence – to mimic the “Bilbao effect” of Frank Gehry’s Guggenheim Museum in that once-obscure Spanish city. The details would follow.

Predock doesn’t lack for showmanship: A warm, powerful speaker and an avid motorcyclist, he was wearing his favoured Ducati cap and Rick Owens leathers when I met him. But in the CMHR he displays two tendencies of his architectural generation, toward regional influences and heavy-handed symbolism, that sadly went unchecked.

Predock’s architecture has been heavily rooted in the American Southwest; he frequently uses adobe, sand-coloured concrete and stone, and chooses forms that evoke desert and mountain. In the 1980s and 1990s he built a series of projects, largely between Texas and California, that have the overly detailed, self-conscious quality of that era. Some – like the concrete mountain range of the Nelson Fine Arts Center at Arizona State University – have aged very well, to his credit. The Hotel Santa Fe at Euro Disney, less so. 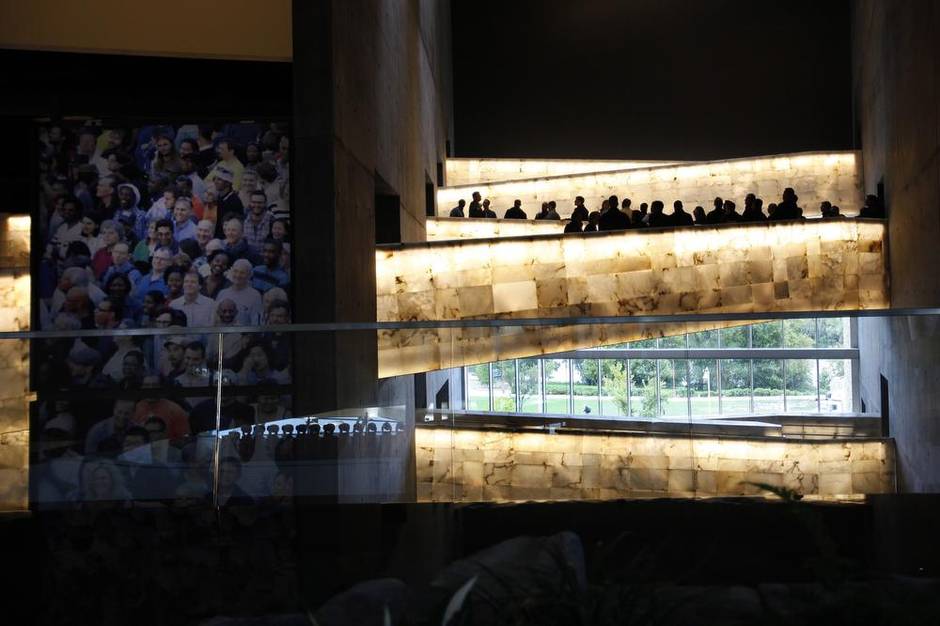 The museum opens some of its galleries Saturday. (John Woods/The Canadian Press)

In Winnipeg, he pursued a regional strategy by choosing Tyndall stone, Manitoba’s honey-hued signature. And from a distance, the rough-cut slopes of the museum’s base are gratifying, like a pop star wearing a T-shirt with the name of your city onstage. Yet the museum’s form is foreign: A mountain in Winnipeg?

This incoherence carries through the building. The grandest space in the museum is the Garden of Contemplation, a water garden studded with slabs of Mongolian basalt. (Why Mongolia? Why not?) Suspended above the garden, in the giant atrium, are open offices for museum and foundation staff, intended to make their work transparent to the public. These are elegant ideas. But in practice the space is inexcusably clumsy: some boulders and a cubicle farm inside a “cloud” that rests on a bulky steel structure. The stone and white-painted steel members evoke the ballpark that Predock designed for the San Diego Padres.

It’s hard to fathom that the museum, including its mere 47,000 square feet of gallery space, cost $351-million.

Consider the Aga Khan Museum in Toronto, which opened last week. There, $300-million bought an exquisite museum by a Pritzker Prize-winner, Fumihiko Maki, plus a very fine public garden and a second cultural building – the Ismaili Centre by Charles Correa – whose broad, lustrous glass dome trumps anything in Predock’s museum. 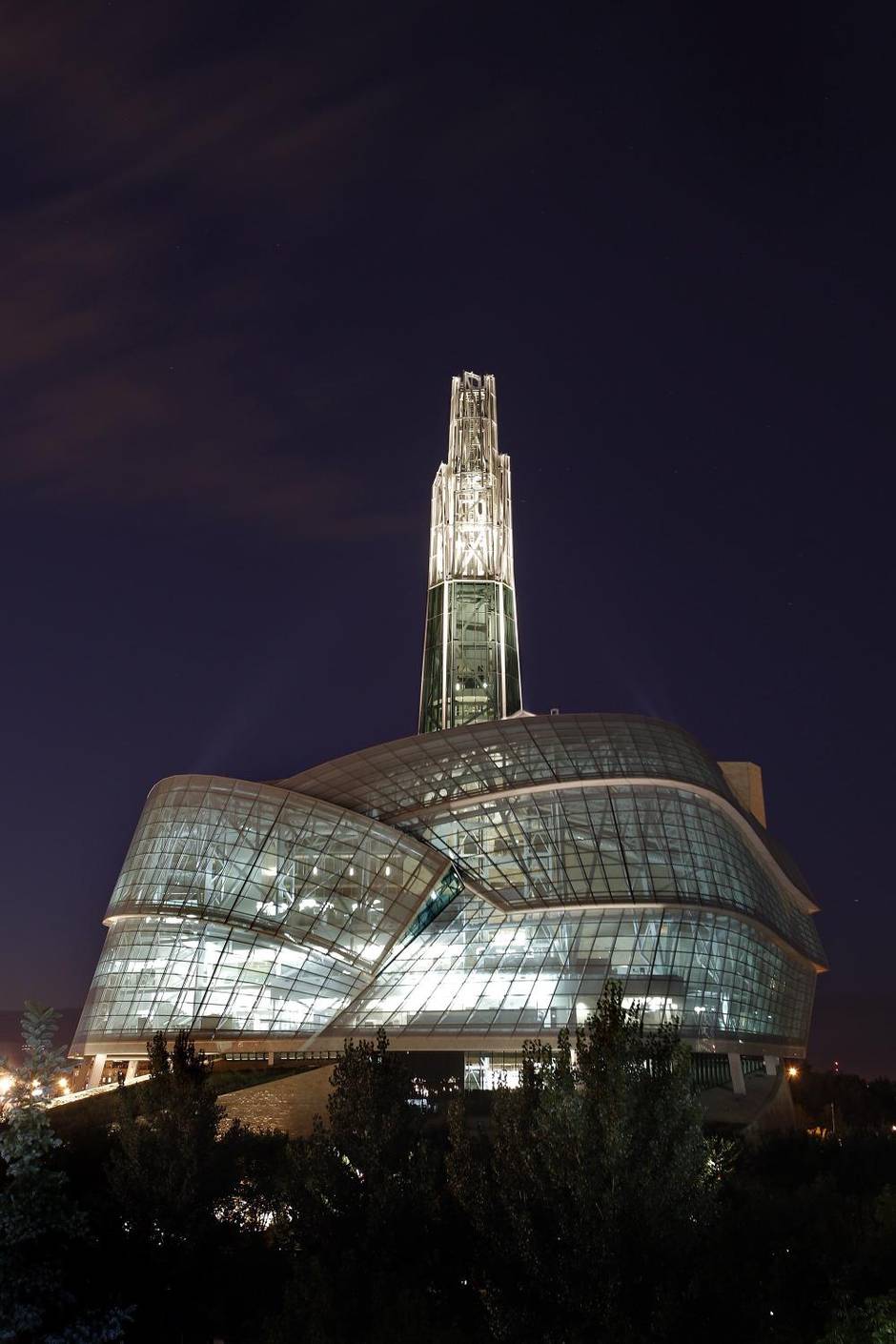 Happily, the CMHR’s $351-million bought a showpiece for Winnipeg’s building industry. It is constructed extraordinarily well. Its architecture is at times absurdly complex; some walls are both canted and curved, the 5,000-square-metre glass cloud is a serious engineering challenge, and there are many details in stone and concrete that required careful planning and handicraft. Predock’s office collaborated effectively with Architecture 49 and with builder PCL Construction; the local firms bear much of the credit for its successful completion, which was aided by the sharing of three-dimensional digital design models between designers, builders and trades. It sets a new technical precedent for construction in Canada.

But in service of what? Never in this country has so much money and such high ambitions achieved so little architecture. Izzy Asper wanted this building to “reach for the skies.” It does, forcefully and cussedly, and it fails to lift off.