Inuit art in its great variety and sameness has been a such a staple of airport gift shops, tourist zones, art galleries and museums for so long, sometimes it seems as if it has always been with us.

But, of course, it did begin somewhere some time. And Monday evening one of the "foundational texts" of the Inuit art phenomenon goes up for sale in Toronto at Waddingtons.ca auctioneers. It's a complete, near-pristine set of the first Cape Dorset prints from 1959. The 39 graphics, by 12 artists originally issued in editions of 30 or 50 per print, are believed to be the only extant intact portfolio in private hands in the world – in this case, those of Toronto collector Doug Steiner who purchased the set at auction from Waddington's 12 years ago for $160,000.

At that time, Waddington's affixed a pre-sale estimate of $80,000-$100,000 on the set. Today auctioneer and consignor are rather more bullish about its prospects: The estimate they're advertising is $400,000-$450,000 – the highest estimate ever, in fact, for a single lot of Inuit art at auction.

That all 12 artists who produced the inaugural portfolio are dead, the last passing earlier this year, and that an estimated 20 per cent of the total issue has been lost over the decades to attrition make it quite likely that Monday's result will exceed the estimate. Then again, "it's really hard to forecast how this stuff will go," observed Waddington's president Duncan McLean last week. At the same time, "prices for early individual [Cape Dorset] prints have gone up way more than sculpture in the last six or seven years," he acknowledged. In 2010, for instance, he sold one of the most famous of the original 1959 Cape Dorset prints, Niviaxie's Man Hunting at Seal Hole (in Ice), for $55,000. Fifteen years ago about the only Inuit print that would fetch at least $1,500 at auction was Kenojuak Ashevak's iconic stonecut The Enchanted Owl, part of the 1960 Cape Dorset release. Today any number of prints sell for that.

Printmaking is, of course, not native to the Inuit. It was introduced, in fact, to the Nunavut hamlet of Cape Dorset in the mid-1950s by a white administrator with the Department of Northern Affairs, James Huston, as a sort of crafts/employment program. Although the program took a couple of years to become operational, the Inuit quickly proved adept printmakers with a bold graphic sense. When the inaugural Cape Dorset prints, completed in fall 1959, went on sale in February/March 1960, they met with considerable interest. The prints, with prices ranging from $12 to $48 each, eventually sold out, earning $20,000 for the West Baffin Eskimo Co-operative.

As the years rolled on, the Cape Dorset prints, now released each fall, became as much a signifier of Inuit art as soapstone carvings of hunters harpooning walruses. It also made art stars out of Kenojuak – her first print image, Rabbit Eating Seaweed, was in the 1959 Cape Dorset release (the 20th impression of the run of 30 is for sale Monday) – Kananginak Pootoogook, Jessie Oonark and Lucy Qinnuayuak, among others.

"In an ideal world," McLean remarked, the portfolio he's hammering down Monday evening "would be bought and donated to the Winnipeg Art Gallery" for installation in its planned Inuit Art and Learning Centre. Should this occur, the WAG, an assiduous collector of Inuit art since the late 1950s, would likely be only the second Canadian public institution with a complete 1959 Cape Dorset portfolio in its collection. (The only one at present is believed to be the Canadian Museum of Civilization in Gatineau.)

However, McLean acknowledged it's just as likely, perhaps entirely likely that the portfolio "will get sold and broken up." Certainly Steiner and the unidentified Toronto collector before him who spent many years assembling the 39 prints saw themselves as custodians of the entire set, refusing to sell individual works. The new owner may not be that sentimental.

"One of the points I keep trying to get across," McLean added, "is the importance of these prints to the Canadian art sphere, not just the Inuit. There's not a big school of great printmaking in Canada … but if you were to travel the world and you had a David Milne dry-point and a David Blackwood whale thing and you had a Kenojuak, you know the one that people are going to recognize."

The complete 1959 Cape Dorset graphics collection is one of 287 lots for sale Monday, starting at 6 p.m. EDST at Waddingtons.ca, Toronto.

For Inuit culture, she was an iconic light of happiness and a dancing owl
January 12, 2013 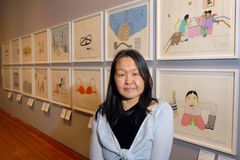 Kananginak Pootoogook: The guiding voice of Cape Dorset artists chronicled the Inuit past
December 4, 2010
Follow James Adams on Twitter @Jglobeadams
Report an error Editorial code of conduct
Due to technical reasons, we have temporarily removed commenting from our articles. We hope to have this fixed soon. Thank you for your patience. If you are looking to give feedback on our new site, please send it along to feedback@globeandmail.com. If you want to write a letter to the editor, please forward to letters@globeandmail.com.
Comments