Growing up, Carey Newman didn't hear much about his father's time at residential schools, just a story about being expelled for stealing holy wine and drinking it under an apple tree.

"My dad's not a talker," said Mr. Newman, 38, during an often emotional interview at his Victoria home and studio. "So he made a conscious decision not to tell us things about what happened to him. The first time we actually heard from his mouth a lot of the things that happened to him was during the statement-taking at the [Truth and Reconciliation Commission] event in Victoria."

What his father revealed – about his loss of home, hair, clothes, his very identity – profoundly affected Mr. Newman.

As part of the commission's plans for commemoration, Mr. Newman, a First Nations artist, is now creating a national monument to recognize the atrocities and symbolize reconciliation.

Mr. Newman is gathering residential schools-era artifacts from across the country, and will "weave" them into a large-scale installation. Inspired by the blanket – an important cultural symbol of recognition, strength and protection – it will be made up of panels and will ultimately measure about two metres tall by at least nine metres wide.

Originally, the work was to consist entirely of artifacts from residential schools. But Mr. Newman decided to include artifacts from traditional structures, such as teepees, friendship centres and sweat lodges that demonstrate the resilience of the culture, as well as from churches and government buildings of that era that speak to the reconciliation element of the process.

For decades, it was government policy to relocate First Nations children from their homes to boarding schools where abuse was common and where children were punished for speaking their own languages and practising their own cultures. As has recently been reported, hundreds of hungry children in several schools were subjected to government experiments that knowingly left them malnourished.

Mr. Newman's goal is to collect 2,500 artifacts that can be "woven in" in various ways – mounted, or, when dealing with documents or photographs, photo-transferred on to blocks of wood.

In his basement studio, he brings out what he has collected so far, carefully, examining some of them for the first time. There's a door knob from St. Paul's school on the Blood Reserve in Alberta, an Anglican prayer book written in Inuktitut from a church in Iqaluit, a rock from the sweat lodge at Lejac residential school in Fraser Lake, B.C. He takes out a child's shoe from a Ziploc bag and can't contain his emotions. The shoe, crumbling and small, was retrieved from the woods near where the burned-down Chooulta residential school once stood in Carcross, Yukon.

"I don't think that I could imagine any way of making a piece that would be more life-altering. It's the most complex on every level because of the variety of materials we're getting and because of the emotional content," Mr. Newman said. "There's a ton of emotion that goes with it, and it might not even be the hardest part. You want to showcase each piece in the best possible way."

With a budget of about $1-million, mostly from Aboriginal Affairs and Northern Development Canada, Mr. Newman has hired a team to help with everything from artifact collection and cataloguing to creating the digital element to the project – a parallel online blanket – where people will be able to access the history and personal stories that relate to each element of the work.

Since the spring, his team has gone on gathering trips, soliciting stories and artifacts, bringing along a small prototype of one of the panels. They have encountered some opposition, but not much – of the 10,000 or so people they've met, Mr. Newman says, fewer than a dozen have expressed concerns about the project. More trips are planned.

When the work is completed, he hopes to take it across the country, visiting communities that supplied artifacts and were affected by residential schools. After the tour, he hopes the installation will find a permanent home. If a residential schools museum comes to be – possibly at the planned National Research Centre at the University of Manitoba – Mr. Newman would like to see it there.

His paternal grandfather is Kwagiulth and his grandmother is Coast Salish. His mother is of English, Irish and Scottish descent, and helped bring about an important breakthrough in Mr. Newman's relationship with his father.

"The day I turned the age my dad was when he was taken, we lost our ability to communicate. I guess I was about eight years old when, all of a sudden, everything I did upset him," Mr. Newman explained. "We couldn't get along at all, and it lasted right through until I was sort of probably near 15."

That's when his mother intervened, insisting her husband get counselling and confront his past.

"So he went and, through that, we both started to identify that it came back to that being the day he lost his dad, essentially," Mr. Newman said. "Through the counselling, he figured out that he and I lost our ability to communicate because that's [the age] when he didn't have a dad to communicate with any more."

But it wasn't until his father gave his statement at the TRC hearing in Victoria last year that Mr. Newman heard the details of what happened to him in 1945. How he was taken from his own parents at their home in Alert Bay, B.C., and moved to a mainland residential school in Sechelt. How he watched as his head was shaved and his hair fell to the floor.

"They took away his clothes and his hair, and essentially his identity," Mr. Newman said, frequently breaking down as he tried to get through his father's story.

Each piece Mr. Newman is collecting for his work comes weighted down by stories similar to his own family's. They're not all terrible, though. One woman wrongly thought she could not participate in the Witness Blanket project because she loved the nuns who taught her, and felt grateful that she had learned English. Also, with the school in her own community, she was able to sleep at home. All of these feelings, all of these stories, are valid and important, Mr. Newman says.

His story is, too. In September, Mr. Newman will go on a gathering trip of his own. He and his father, now 76, will travel back to Mission, B.C., where, after Sechelt, his father attended St. Mary's residential school. The school has long since been demolished, but they're going to look for the apple tree where he and his friends drank the stolen holy wine.

In Victoria and Toronto, meanwhile, Mr. Newman's sisters have been growing their hair. When it's time, they'll cut it off. Their braids will surround a piece of that tree, and Mr. Newman will work it into his installation.

"That," he said, "will be our family's contribution to the blanket." 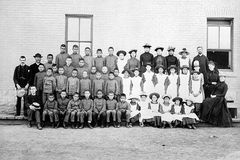 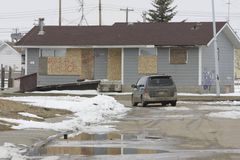 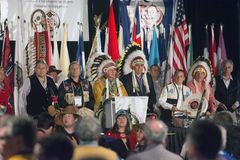 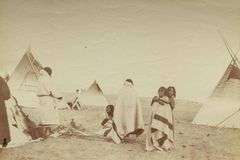