"I was thinking about painting in terms of adjectives and adverbs,” Dana Schutz said, during an encounter this week at Montreal’s Musée d’art contemporain, where her paintings were being installed for a self-titled 14-year retrospective. She was referring to a phase during her student days, before she made the paintings hanging at the MAC, but adjectives and adverbs seem like good starting points for thinking about this widely exhibited, 39-year-old American’s work from almost any point in her career.

In 2007, for instance, she did a series of paintings called How we would … , each of which offers a direct adverbial response to a situation. How would we give birth? – distractedly, it seems, while staring at a gilt-framed landscape. How would we talk? – privately and poignantly, in a phone booth, while running our fingers down the dirty window glass.

In 2009, Schutz began making portraits of women performing three actions at once. Swimming, Smoking, Crying depicts a stunt no one could do, but this one woman with the high-arching arm and the despairing fish-tail eye is determined to try, anxiously and desperately. The painting is a burlesque of multitasking. So is Shaking, Cooking, Peeing, in which the woman’s stolid upright positioning in the middle of the canvas vainly disputes the fact that she’s not the centre of anything. She is a tiny distracted atom flying along the whirlwind created by a pointless cultural imperative: that we do much, and all at the same time. 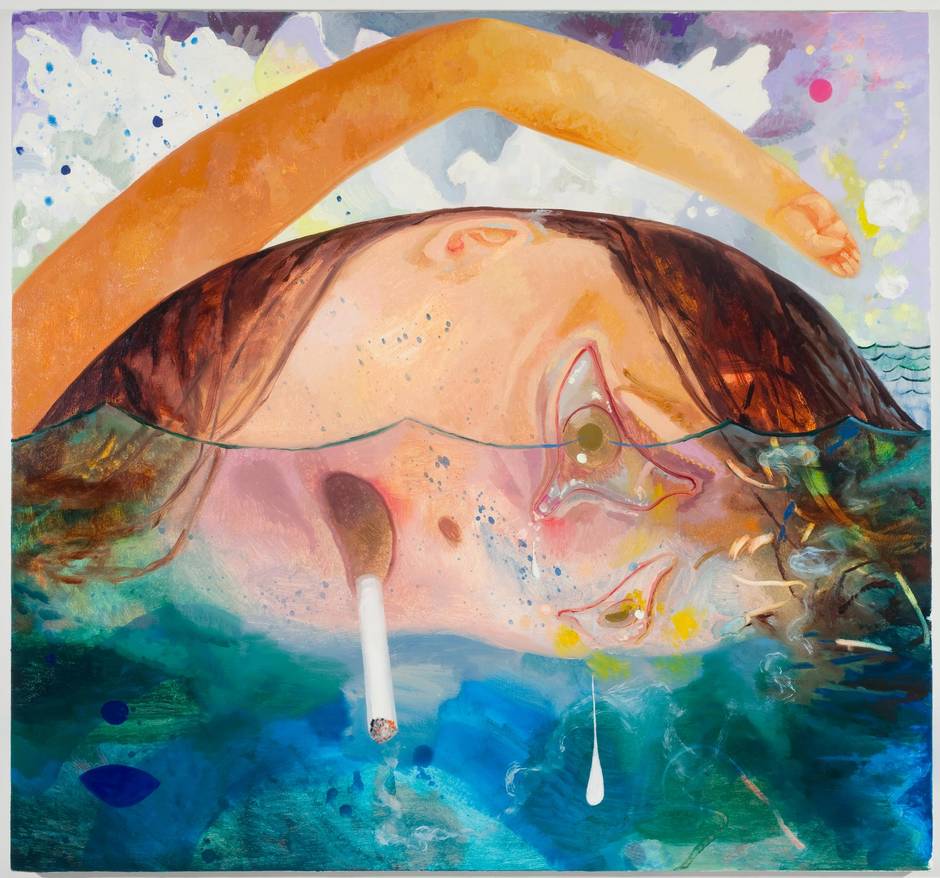 Sometimes that’s more than a body can manage, which is why another Schutz canvas from 2012, Getting Dressed All at Once, has an epic, canvas-filling look, like the creation of a world. But what adjectives does this painting call to mind? I would say worried, patterned, pink and definitely abstract, because the figure has been bent and compressed into the same visual plane as a striped field that could be a shirt. There’s a lot of compression in Schutz’s paintings, as if she had conceived her subjects in the round and then forced them into two dimensions. The tension in the visual space is consistent with the tense yet comical demands made on her figures, who strive against the humiliations they must endure.

The figures in these canvases wrestle or merge with their surroundings, or pluck pieces from them to assemble different and possibly better selves. In Twin Parts (2004), a block-legged nude selects alternate body bits from a few nearby tables, as if in a department store. But the scene is a meadow and the parts could be mineral or vegetable. In New Legs (2003), a nude man on a beach builds a pair of rock-like prosthetics – optimistically, one might say – for his pink stumps. 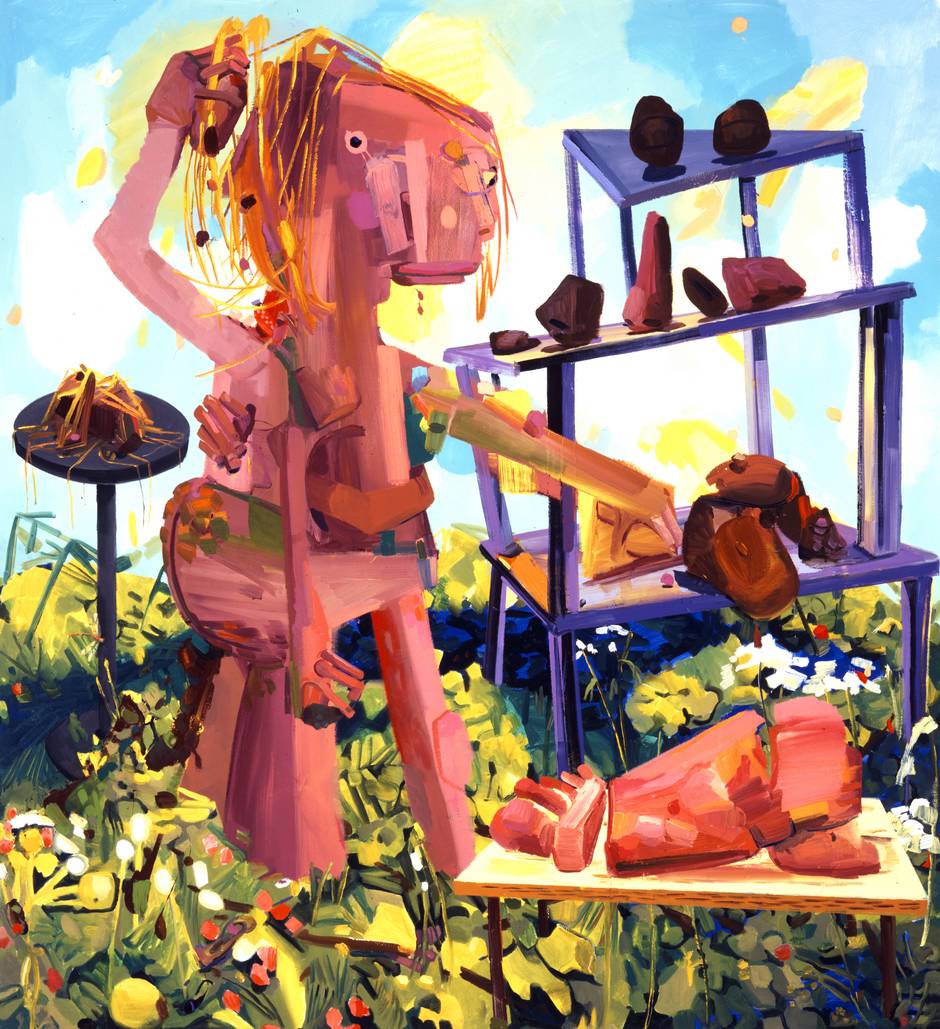 Other paintings show people eating their hands or faces, like Goya’s son-devouring Saturn moving from offspring to self. But Face Eater (2004) also feels like a liberation, because the impossible act has allowed Schutz to scramble facial anatomy, and to fantasize about how a tongue could lap down eyeballs in a mouth that has somehow swivelled up to the top of the head. It’s a figurative painting, but it depicts nothing in the world except what we can think.

Animation can do that, too, and some of Schutz’s paintings look like animations with the time squeezed out of them. The shaking part of Shaking, Cooking, Peeing is mainly represented by several overlapping depictions of a single arm. Shaving (2010) initially seems to show a woman doing some painfully intimate grooming at the beach, but the separate plane and dissociated colouring of the shaving itself suggests that it’s happening at a different time and place. It’s the private agony that “must” be suffered before the public pleasure of watching a sunset while sprawled on the sand in a bikini. 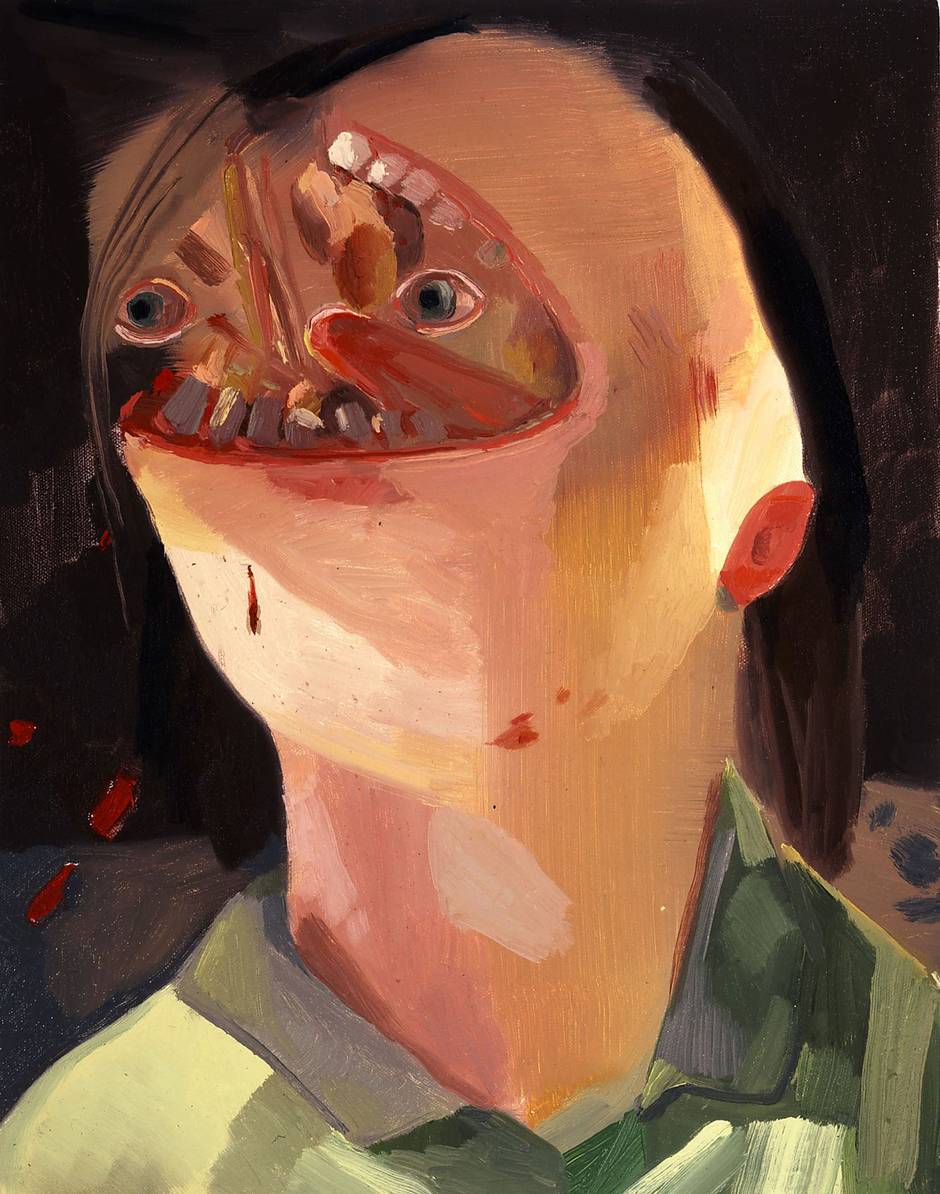 If you extract enough time from painting, you end up with images of sacred figures that exist in eternity, which Schutz did in a series of God paintings from 2013. Her gods hog their large canvases, because they’re gods and because they’re on the point of becoming everything. God 5 is a swirling, candy-coloured abstract that could be the Big Bang, or the penultimate frame in a battle royal between superheroes, missing only the word POW! somewhere in the frame. But Schutz’s gods are also vain, as we see most clearly in God 6, a macho superman whose multiple penises sprout from his swim trunks like a bunch of bananas. This is the loud, strutting beach god whose hairy chest is all the world’s affair.

As much as these paintings seem to reflect the deformations wreaked on the individual by blunt cultural forces, they’re also very much about painting. Schutz is constantly negotiating the painted surfaces and all its issues, and alluding to artists from the past. She also refers at times to events in the world, such as the second Iraq War, which plausibly underlies the Lord of the Flies adventure of blind-folded men in suits that is Men’s Retreat (2005). The MAC’s exhibition catalogue includes an image of a 2015 painting called Fight in an Elevator, which continues Schutz’s obsession with compressed space but which also looks like a depiction of the infamous knock-out punch football star Ray Rice gave his fiancée in an Atlantic City hotel elevator in 2014. 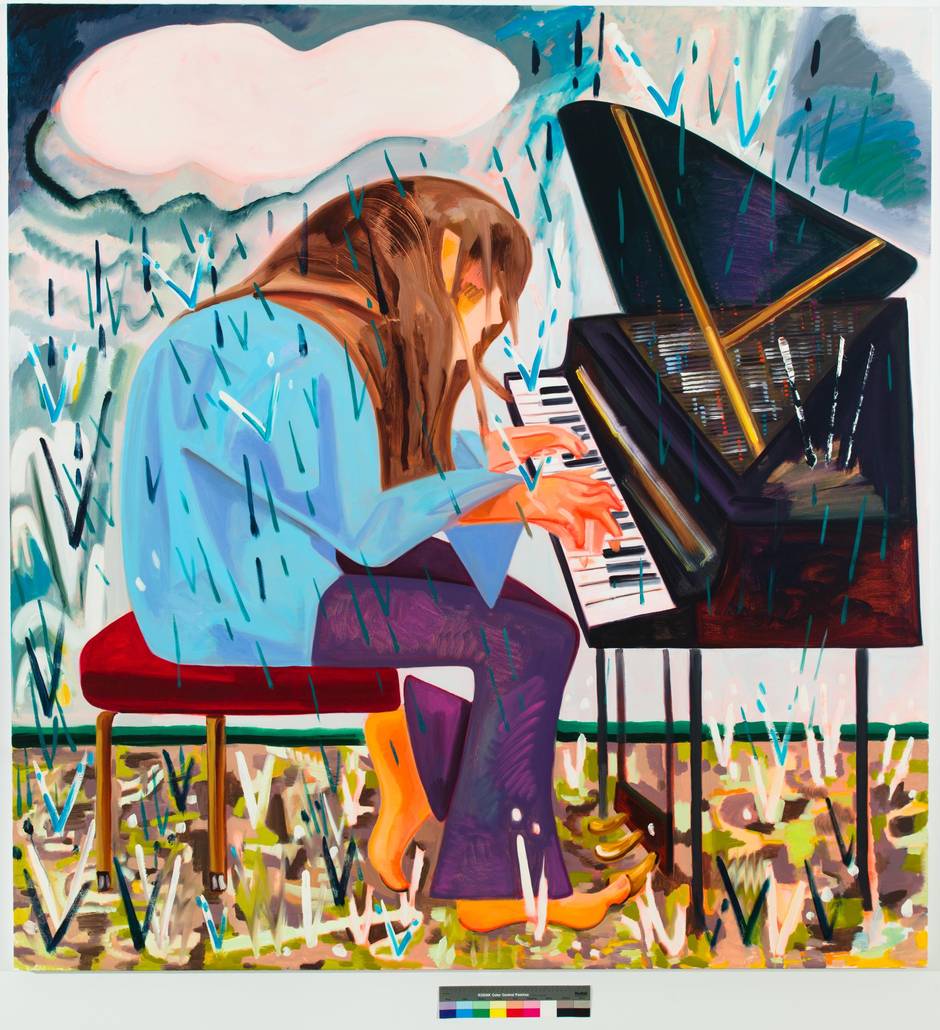 Through most of these images, dark as they may be, Schutz projects a resilient sense of innocence and wonder. Landscape settings, which appear in so many of her paintings, appeal to her as a kind of “clean slate,” she told me, where her figures can recombine and reinvent themselves. The land and the natural world open a space in these paintings for the marvellous, and suggest that the often grotesque transformations Schutz presents are also marvels of a sort.

The show’s newest and most ephemeral scene, Boy With Bubble (2015), shows a balloon-headed tot reaching for a huge soap bubble. We know that beautiful orb will burst in the next second, but the round golden sun will keep beaming in the distance, behind a cubist utopian mountain range.