With apologies to Arthur Rimbaud: There’s a drunken boat, an honest-to-gosh 1952 Nordic Folk sloop complete with sails, keeled over these days in the middle of the main indoor exhibition space of the Museum of Contemporary Canadian Art in Toronto. While it’s true MoCCA is only a little more than a kilometre away from Lake Ontario, no tidal wave or sudden flood is responsible for beaching this boat. The responsibility rests entirely with 42-year-old Dean Baldwin, the crafty Brampton, Ont.-born, Montreal-based mixed-media artist who late last month installed – or should that be dry-docked? – the vessel as part of an exhibition titled Q.W.Y.C., short for “Queen West Yacht Club.”

The installation, one of three Baldwins at MoCCA through most of August, is also a drinking boat in that its interior has been converted into a fully functioning boozeria/snack bar. Stir sticks, vodka bottles, wine, martini shakers and limes, tins of sardines, boxes of tea biscuits, jars of jam, Marmite and pickles – they’re all there, ready for the mixological ministrations of Baldwin (who has a Smart Serve licence from the Alcohol and Gaming Commission of Ontario) and others, including, on Aug. 11, the League of Women of Great Personal Charm and Wit.

Bars are nothing new to MoCCA. Late last year it hosted … from the Transit Bar, an installation art landmark reconstituted almost 25 years after its creation as part of a mini-survey of works by the protean Vera Frenkel. First displayed in the rotunda of Montreal’s Musèe d’art contemporain four years ago, Ship in a Bottle – the title of the Baldwin installation – has a more immediately, well … metaphoric cast to its Toronto appearance. Baldwin’s show, you see, also is functioning as a bon voyage to MoCCA which, after 10 successful years on groovy West Queen West, is having to close its doors once Q.W.Y.C. ends to make way for condominiums. 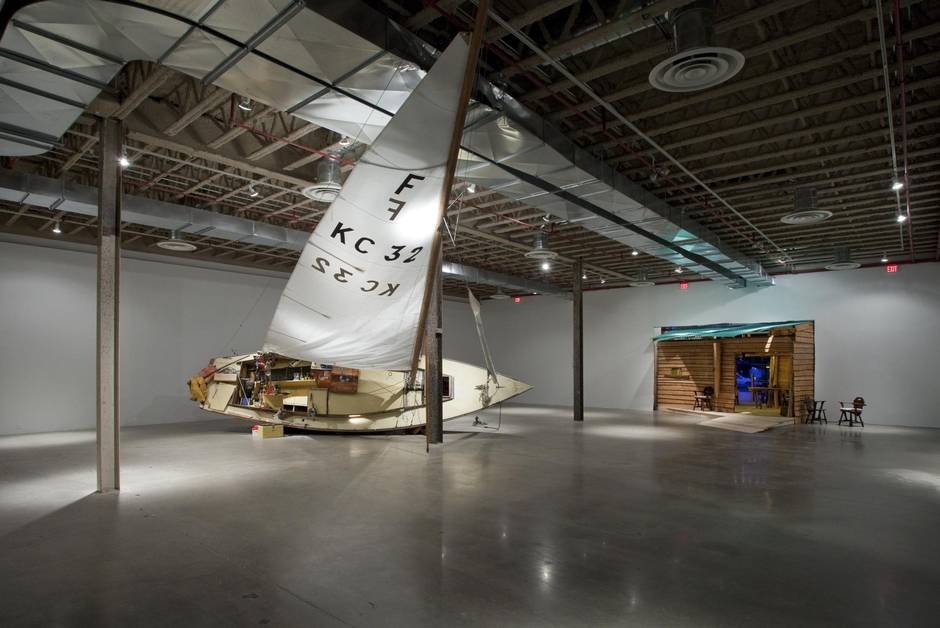 Happily, the museum is relocating to new, larger digs in the rising Junction Triangle neighbourhood, but won’t be occupying them until late 2016 or early 2017. Until then, it’s somewhat adrift on the winds of change, content in the interim to pitch up with the occasional exhibition or event at one port or another but calling no particular harbour its (temporary) home. With Ship in a Bottle then, the visitor has the opportunity to either drown his or her sorrow at MoCCA’s imminent demolition or hoist a toast to the institution’s brighter prospects, confident that even in a city of unmoored property values, a rising tide lifts all boats. Propped on the sloop’s hull is a short-wave radio, set to Environment Canada’s Weatheradio service, offering non-stop bilingual reports on atmospheric conditions in Ontario.

Baldwin’s other installations for his land-locked yacht club speak to the changing function of art museums in the past 30 years as they’ve sought to engage a bigger, more broad-based audience. Chalet is just as billed, a ramshackle cabin/beach-hut/boat house, the first iteration of which Baldwin erected at MASS MoCA in North Adams, Mass., for the acclaimed 2012 Oh, Canada survey. It comes complete with rustic chairs, wood-burning stove, plank floors, Coleman cooler, sinks, hooks holding coffee cups and a shelf with 20 or so Hardy Boys mysteries.

One half of Chalet is positioned where MoCCA’s reception desk used to be, while the other crashes through a wall into the museum’s main space. Outside in MoCCA’s courtyard, bracketed by unpainted picnic tables, you’ll find Queen West Memorial Fountain, a funky mix of pier wood, timber, neighbourhood detritus and flotation noodles lashed with thick ropes, the water, um … cascades from a garden hose. It’s a sodden hybrid of tepee frame and Tatlin’s Monument to the Third International.

Museums once were rather sepulchral kunsthauses. Today they’re not only venues in which to experience art but also idylls for idling, community centres where you can eat, drink, party, attend concerts, hang out, buy stuff and, sometimes, make it, too. Concocted from commodities lost and found, bought and recycled, Baldwin’s convivial creations inhabit those collapsed borders between life and art, art and craft, the real and simulated, culture and consumption. Pick up a Q.W.Y.C. beach towel in the vestibule, why dontcha? It’s only $25.

Dean Baldwin’s Q.W.Y.C. continues at the Museum of Contemporary Canadian Art, Toronto through Aug. 23. Its run is complemented by a series of live performances, seminars, parties and installations. Go to mocca.ca/current-exhibitions/ for details. Also showing at MoCCA: Drama Queens (2007), a 43-minute animation video from Elmgreen and Dragset satirizing the contemporary art scene.