Major art collections don't do take-out, unless the recipient is a similar institution with a show to build. But over the past 42 years, the Canada Council Art Bank, the country's largest trove of contemporary Canadian works, has shown thousands of works on loan without ever having an exhibition space to call its own.

That's changing, as the Art Bank takes control of a 300-square-metre area in the foyer of a 21-storey office tower at 150 Elgin St. in Ottawa. The new display space, downstairs from offices the council moved into last December, opened yesterday with a 13-work exhibition called Land Reform(ed), which Art Bank director Victoria Henry describes as "works that deal with land but not as landscape."

The space, called Ajagemo – an Algonquin word meaning "crossroads" – also acts as a passageway between buildings, and is sure to let a lot of walk-through traffic. This is a good time to bump up the public visibility of the Art Bank, which is having to look for new art rental clients to make up for a sharp drop in business from its main customer: the federal government.

The Art Bank was established in 1972, with a mandate to stimulate the market for Canadian art and spruce up the halls of official Ottawa. Suzanne Rivard Le Moyne, the council's visual arts head at the time, reasoned that since government offices and other public buildings needed to put something on their walls, it might as well be Canadian art. The bank would buy recent works through a competitive peer-jury process, and rent them to offices around Ottawa and beyond. The federal government provided seed money at the start, but the bank was always supposed to be self-supporting. Most years it ran a surplus, with which it bought more work – more than 17,000 pieces to date, at an appraised value of $71-million.

Henry points to the recession as the underlying drag on rentals, though she also says that 2009 was "the peak year in art rentals" since she took over the Art Bank in 1999. She dismisses the notion that the politics of the current federal government may be a factor, saying that there were four years of no purchases in the mid-1990s when Liberals were in power.

The Canada Council covered the bank's deficits, which Henry says may continue for another year or two, though there is a limit, as yet untested, to council largesse. "Our policy remains that the Art Bank should be self-sustaining," says Pascale Legault, the council's chief financial officer.

Henry says the bank is fishing for more private clients through outreach ventures such as a 40th-anniversary show two years ago at Kingston's Agnes Etherington Art Centre, and a recent two-month showing of works at Toronto's First Canadian Place. Half of the bank's private renters are lawyers, she says, and there are a lot of lawyers in First Canadian Place.

"We rely a lot on referrals," she says. Somebody visits a colleague's office, likes the picture on the wall, and with luck, contacts the Art Bank for a consultation. Pieces are suggested, a contract is signed, and the whole transaction is tax-deductible. Some pieces rent for as little as $10 a month, though the minimum order is a two-year contract for $1,000 a year in rentals.

The Art Bank also has 40 enlargeable works on Google Art, including a couple by Edward Burtynsky and Kent Monkman that the bank bought before the two became well-known. The bank's own online presence isn't so sure-footed: The three Works of the Week on its website are playing-card sized and not enlargeable, its Tumblr site is no more impressive, and its blog is a fitful series of guest posts that hasn't been updated in a month. The online catalogue of works has no images, and is useful mainly for scholars and curators.

When the Art Bank does get back in the black, however, Henry says she is inclined to spend on more work, not on jazzing up the website. Purchases are the Art Bank's first mandate, after all, though its future health may depend on more Canadians knowing about it through online exposure. The option of selling works, she says, is not being discussed. About two-thirds of the collection is in storage at any given time, but a sale of any size could depress business for artists and dealers.

As for Ajagemo, Henry says it will host three exhibitions a year. Some curators may be hired, though Land Reform(ed) was put together as a study project by Stanzie Tooth, a master's student at the University of Ottawa. That happens to be the school whose visual arts department Rivard Le Moyne initiated after she left the council – a fact that would probably have pleased the Art Bank's founder. 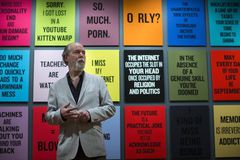 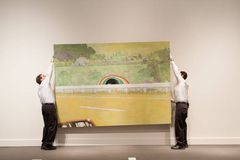 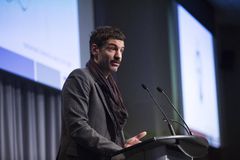