You could see more artists being tested by third parties who believe they own works by particular artists – but which the purported artists deny are theirs – following a federal court decision Tuesday involving the renowned Scottish-born, Canadian-raised painter Peter Doig.

Chicago Judge Gary Feinerman ruled that a desert landscape painting allegedly completed in Canada by Mr. Doig, now 57, in the mid-1970s and owned since then by a one-time Ontario corrections officer is not, in fact, by the artist. Mr. Doig, whose work at auction can sell for up to $32-million, was faced with a lawsuit in 2013 after the ex-prison official, Robert Fletcher of Thunder Bay, and a Chicago art dealer, Peter Bartlow, failed to get Mr. Doig to authenticate the desert scene. (Mr. Doig's own researchers went on to assert the painting was done, in fact, by a Peter Edward Doige, who died in 2012.)

However, a leading U.S. legal researcher says the fact that "this controversy even went to trial at all, not the verdict per se," may serve as "a useful occurrence" for future claimants. Speaking in an interview Wednesday, Michael Bennett, associate research professor at the School for the Future of Innovation in Society and the Center for Science and the Imagination at Arizona State University, said "not all artists are going to be as steely and steadfast as Doig has been," nor have the financial wherewithal to mount a detailed defence in a court of law.

"There will probably be a number of artists who'd rather avoid years of stress and worry, all of the financial costs … and the time lost in handling a matter like this," Mr. Bennett said. He added that when faced with a claim similar to the one pressed by Mr. Fletcher, "artists might just decide to pay, in effect, by acknowledging a work, to do that quietly, with perhaps some contractual stipulation about how the work can be used. But one way or another, they [artists] might bend to it. That worries me a bit."

To protect themselves in future, Mr. Bennett said, artists and dealers may have to look to a technological solution, especially if the art is a physical artifact. One possibility is genomic watermarking embedded in the painting, sculpture, print or installation.

The history of Western art is littered with examples of artists disavowing work that others claim to be by them. In most instances, the attributions have been mistakes, wishful thinking or, in the case of forgeries, fraudulent. Other times, though, the artist will argue the work in question, while originally his, has been damaged since being displayed, changed without his permission or otherwise so fundamentally altered as to cause the artist to revoke authorship.

In the U.S., such revocation is permitted under the Visual Artists Rights Act of 1990 if the modification is "prejudicial to the [artists's] honour or reputation." Where the matter gets tricky is when an artist acknowledges a certain work was created by him, but pooh-poohs it as being juvenilia, a "non-work," unrepresentative or inferior to his mature output. The owner may choose to exhibit the work, but as the legal copyright-holder, the artist can, if he wishes, forbid the work from being reproduced in books and catalogues raisonnés as well as show announcements and exhibition catalogues.

For Mr. Bennett, the Doig affair represents a new scenario, or at least something unusual. "What we have not seen often – and maybe have not seen ever in such a public manner – is an instance in which a third party brings a work that an artist has never laid claim to … and says, 'Oh, in fact this is that artist's work and we're going to compel that artist … to put his or her name on it.'" From the artist's perspective, Mr. Bennett said, this is akin to a living artist "being extorted into making a fake of their own work."

In a statement released Wednesday through his dealer, the Michael Werner Gallery, Mr. Doig said he was thankful "justice prevailed, but it was way too long in coming. That a living artist has to defend the authorship of his own work should never have come to pass."

Gordon VeneKlasen, co-owner of the Werner, which has offices in Manhattan and London, concurred. "It is our hope," he said, "that this verdict will have at least one good outcome – that artists maintain the unfettered right to authenticate their own work." 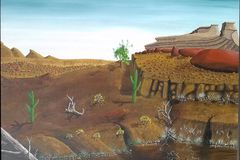 Facing lawsuit, Peter Doig must prove desert painting is not his work
August 5, 2016 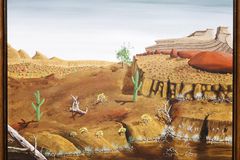