When I was asked three years ago to be the co-curator of a London exhibition on Emily Carr – a show that would also travel back to the Art Gallery of Ontario in Toronto – I experienced a wave of anxiety. Though I had contributed in the past to Dennis Reid’s exhibitions on Greg Curnoe and Jack Chambers at the AGO, I had played a minor supporting role. Here, alongside the Dulwich Picture Gallery’s director, Ian Dejardin, I would be shaping the exhibition – developing its conceptual architecture, making the selection of works, developing the didactic support materials, and (horrors!) meeting the press, the fault-finding, ink-stained wretches with whom I most commonly fraternize. I have been an art critic for 30 years, and now I had to play the other side of the net, making my arguments in three dimensions, on purely visual terms.

Of course, something very significant was at stake for me, particularly given my identity as a proud British Columbian: putting Carr’s best foot forward, and making the most of this unique opportunity for her. For various reasons – mostly to do, I think, with her rising and falling self-confidence – Carr was an artist of strikingly uneven quality. How to cull the pile to do best service to her legacy? 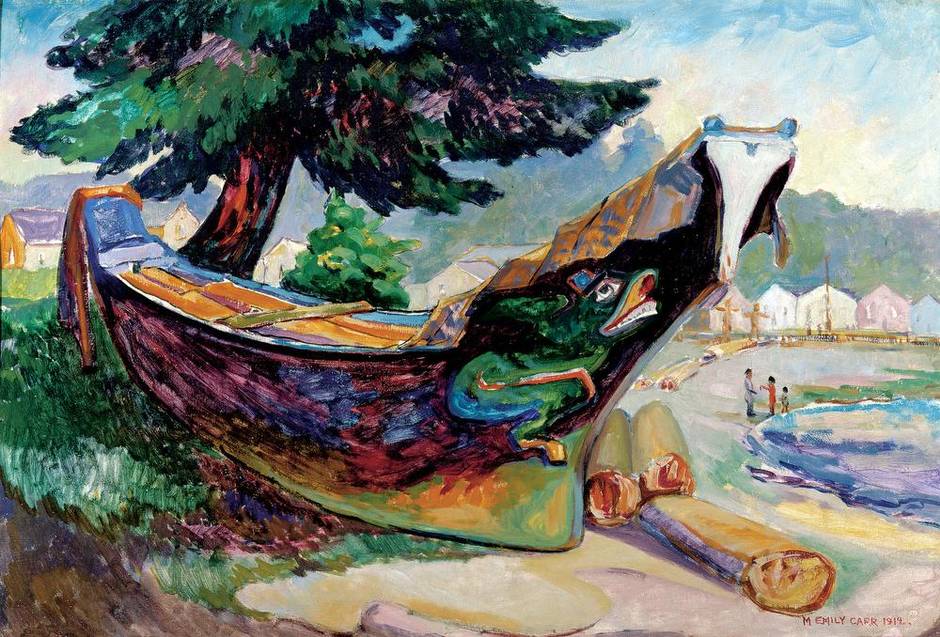 Then there were the thorny questions surrounding her appropriation of First Nations culture in her art, which we needed to address in a way that would serve both a new audience for her paintings in Europe, for whom these Canadian debates are unfamiliar, and another public here in Toronto that is highly sensitized to such discussions, and which may feel (in some quarters) that it knows Carr all too well. Finally, how might we make an exhibition about Carr that could have resonance for First Nations people?

We started making some decisions. First, at the macro level, we decided that we wanted this show to reflect on an aspect of human experience that is changing very quickly in our time: our sense of connection to place. Carr’s life story is an early exemplar of the kind of intercontinental nomadism that is now the global order of the day. Born in Victoria in 1871 to British colonial-immigrant parents, and raised in a staunchly anglophilic household, Carr trained in art in San Francisco, London and Paris, cross-pollinating her imagination with an array of international influences. All of this, though, only made her more committed to the place of her birth. 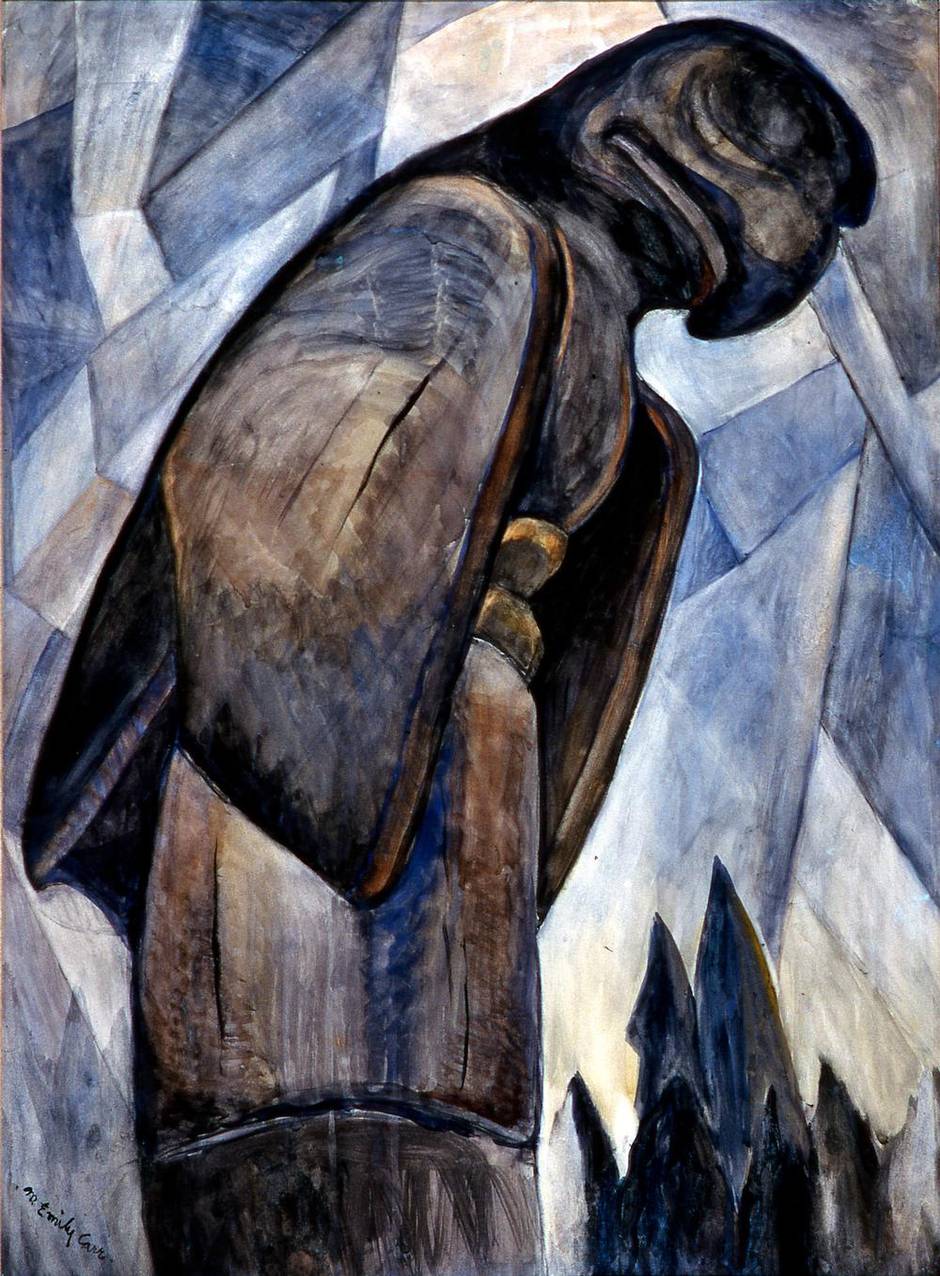 Yet Carr had grasped intuitively what now seems to us so obvious: She understood that she was not, in the fullest possible sense, native to Canada. Speaking of the totem poles, she wrote: “These things should be to us Canadians what the ancient Britons’ relics are to the English.” That is to say: foundational, a source of pride, evidence of our country’s deepest cultural identity. In striking contrast to the unpeopled and frigidly hygienic northern scenes painted by her friend and mentor Lawren Harris, Carr’s landscapes were sodden with vegetative regeneration and decay, but also with history, with stories she struggled to comprehend, with losses she sought to grasp. As she wrote in her book Klee Wyck, recalling her visit to the village of Tanu with her Haida guides and a white female travel companion: “The feeling Jimmie and Louisa had in this village of their own people, they must have made my curiosity and the missionary girl’s sneer seem small.” There is a humility here, and a questioning of the oblivious arrogance of settler culture.

It was in order to make clearer this gulf between colonial and indigenous experience that we committed to ground the exhibition in historic works of Northwest Coast art, which have long been held in British museums, objects taken from the coast in the 18th and 19th centuries by British missionaries, explorers and traders. Looking at a seminal painting of Carr’s such as Indian Church or Totem and Forest, we can see Carr striving to do justice to her frontier experience. But what would happen, we wondered, if we looked at these paintings alongside a Tlingit or Tsimshian Wolf Bowl from London’s Horniman Museum, its interlocking animal crest figures bespeaking centuries-old clan identities, or a Haida ivory handle carved in the shape of a raven’s head, its beak firmly but gently holding a vulnerable human figure (on loan to us from the Pitt Rivers Museum, University of Oxford)? 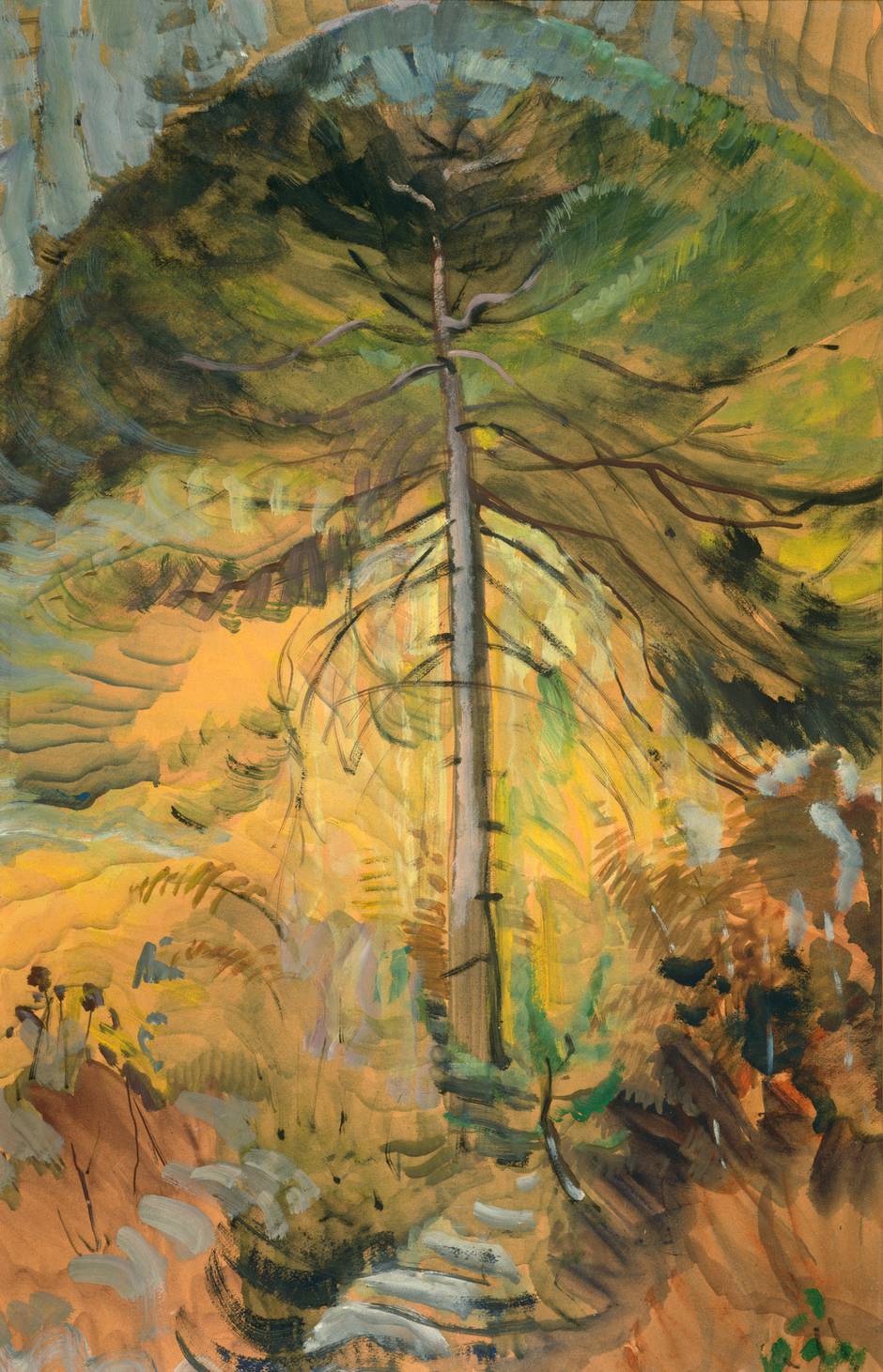 These indigenous objects bespeak a human connection to the natural order, and a sense of clan identity rooted in the land that is totally unavailable to settler Canadians even today (to our impoverishment), and even to someone of Carr’s sensitivity. To help us understand these distinctions more clearly, we asked for the help of James Hart, a Haida hereditary chief and master carver who visited the U.K. collections with us, guiding our interpretation. No wonder the industrialists of the day could desecrate the forests – a practice Carr decried, referring to the cut tree stumps as “screamers.” They had no ancestral connection to it. “The Indian used the cedars, shaped beautiful things from them: canoes, ropes, baskets, mats, totem poles,” Carr wrote, using the parlance of her day. “It was his tree of trees. The picnickers mutilated them with their hideous initials, light fires against them, throw tin cans and rubbish into their hollow boles, size up how many cords etc.” Rather than being the seat of identity, landscape could be reduced to commodity.

Carr’s sense of inquiry, of course, extended also to her approach to art-making. We decided that we wanted to bring more attention to Carr’s works on paper, where she often seems most at liberty to give full rein to her sensuous vision, tipping the balance somewhat away from her oil-on-canvas paintings. The London show includes a whole gallery of Carr’s late-career oil-and-gasoline paintings, some of which verge on total abstraction. As well, we gave some thought to the general perception of Carr as a maker of brooding forest landscapes and totem-pole paintings only, seeking instead to counterbalance that view with a strong display of her rapturous later paintings of dazzling oceans and skies. Carr’s mood swings were as wide and dramatic as those of the British Columbia landscapes she depicted, and we wanted to offer audiences that full roller-coaster ride. Even for those who know Carr well, there will be unexpected moments. 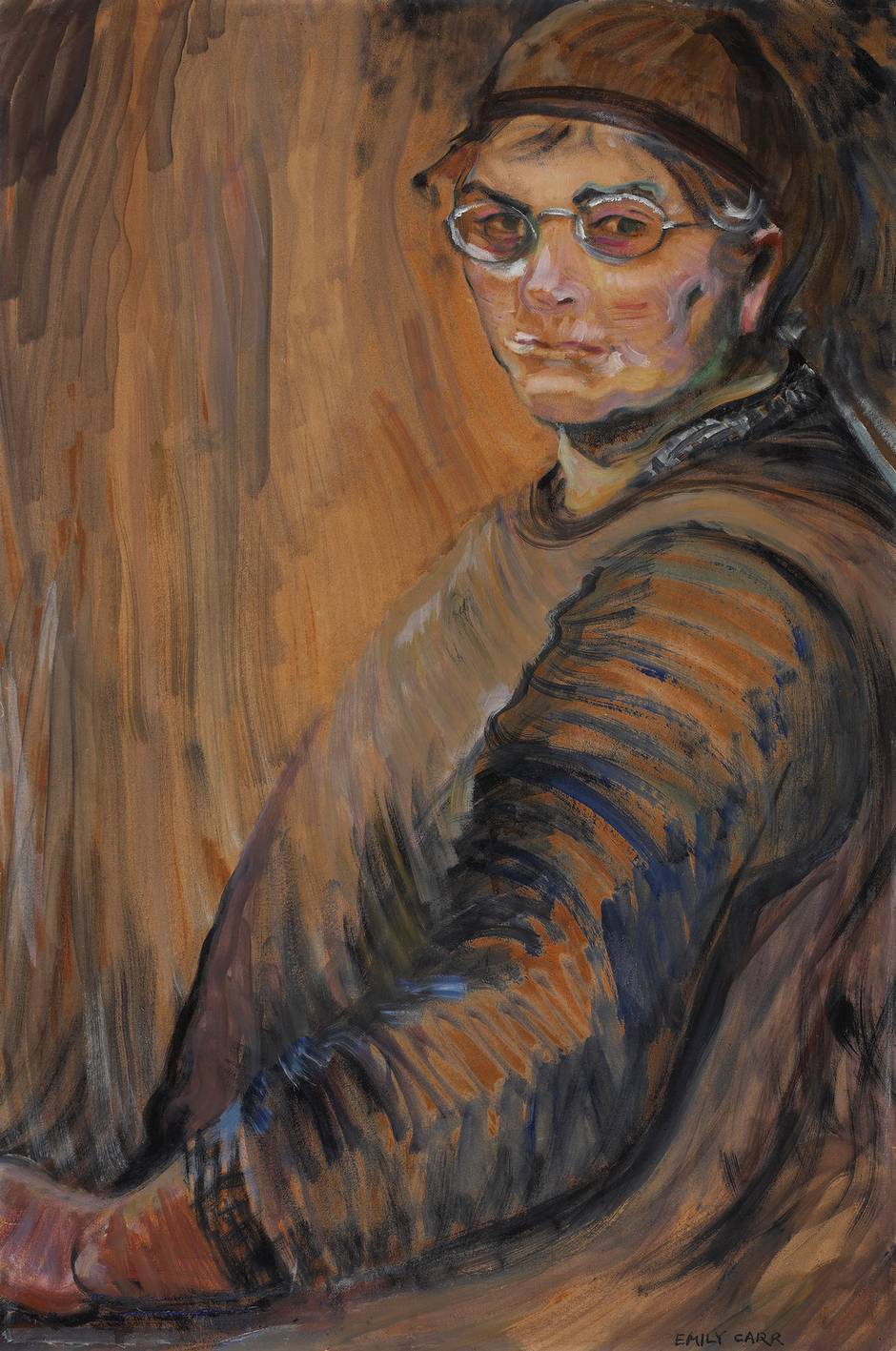 People ask what has surprised me most about Carr. Certainly not the force of her emotion, or her skill in rendering the coast, in all its lushness. And certainly not her ability to evoke the humbling experience of standing in an empty village like Cumshewa or Yan or Skedans and soaking in the silence, and everything that silence means.

Instead, I have been struck by her diligence. I remember, last winter, working my way through Carr’s sketches, which are held in the B.C. Archives in Victoria. In among these quick drawings, made on her travels up and down the coast, I found others that documented a different kind of journey of the mind – drawings that revealed her experimental search for form in nature, with tree forms in particular, subjected to myriad stylistic improvisations. But the archive also contained sketches drawn from anthropology text books, and others she made in museums, as she tried to piece together an understanding of the indigenous cultures she found so compelling. It is true that, in her writings and speeches, Carr often overstepped the parameters of her own expertise, though the bombastic claims made of her special knowledge of “the Indian” were largely made by others, who sought to conscript her art into the service of a burgeoning Canadian nationalism. In the sketchbooks, as in her early watercolours, though, I discovered something different: the evidence of her curiosity and humble toil. 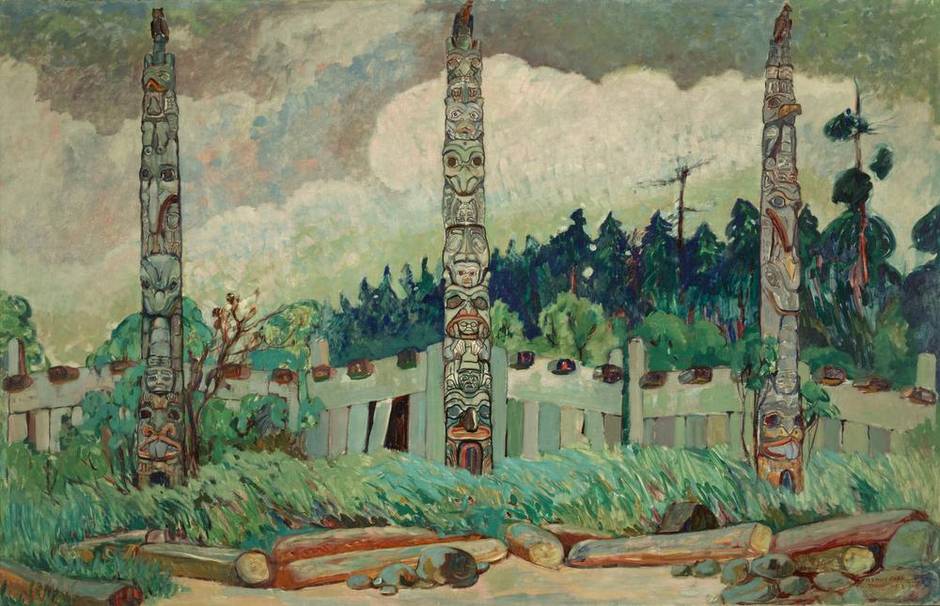 This is what has stayed with me, and fuelled my desire to create another kind of account of Carr, one that would serve as a corrective to the popular view of her as a creature of romantic sensation and feeling only, a kind of Victorian seer of indigeneity swooning in the back of a canoe; or the cranky-yet-endearing landlady with the hairnet, the orthopedic stockings and the pet monkey (though dressing up your monkey in baby clothes and parading it around town in a pram strikes me as feminist performance art before there was a name of it); or, finally, the equally imbalanced caricature of her as a racist purveyor of national myths of inevitable white ascendancy (as some postcolonial theorists would have her).

Instead, we have sought to underscore her diligence and experimentation; her interrogation of the landscape through the lens of Cubism and Fauvism; her sporadic traffic with Seattle modernists and Manhattan cognoscenti (she talked her way into the New York apartment of leading art collector Katherine Dreier, where they took tea surrounded by the paintings of Kandinsky, Picasso, Braque and others); her deep attachment to her literary influences, from William Wordsworth to Walt Whitman; the expressionistic tours de force of her late oil-and-gasoline paintings (broke, getting sicker, camping alone in her summer caravan, letting it rip), where she finally gives full rein to her vision. Heading into old age, there is Carr, alone and hell-bent for leather. 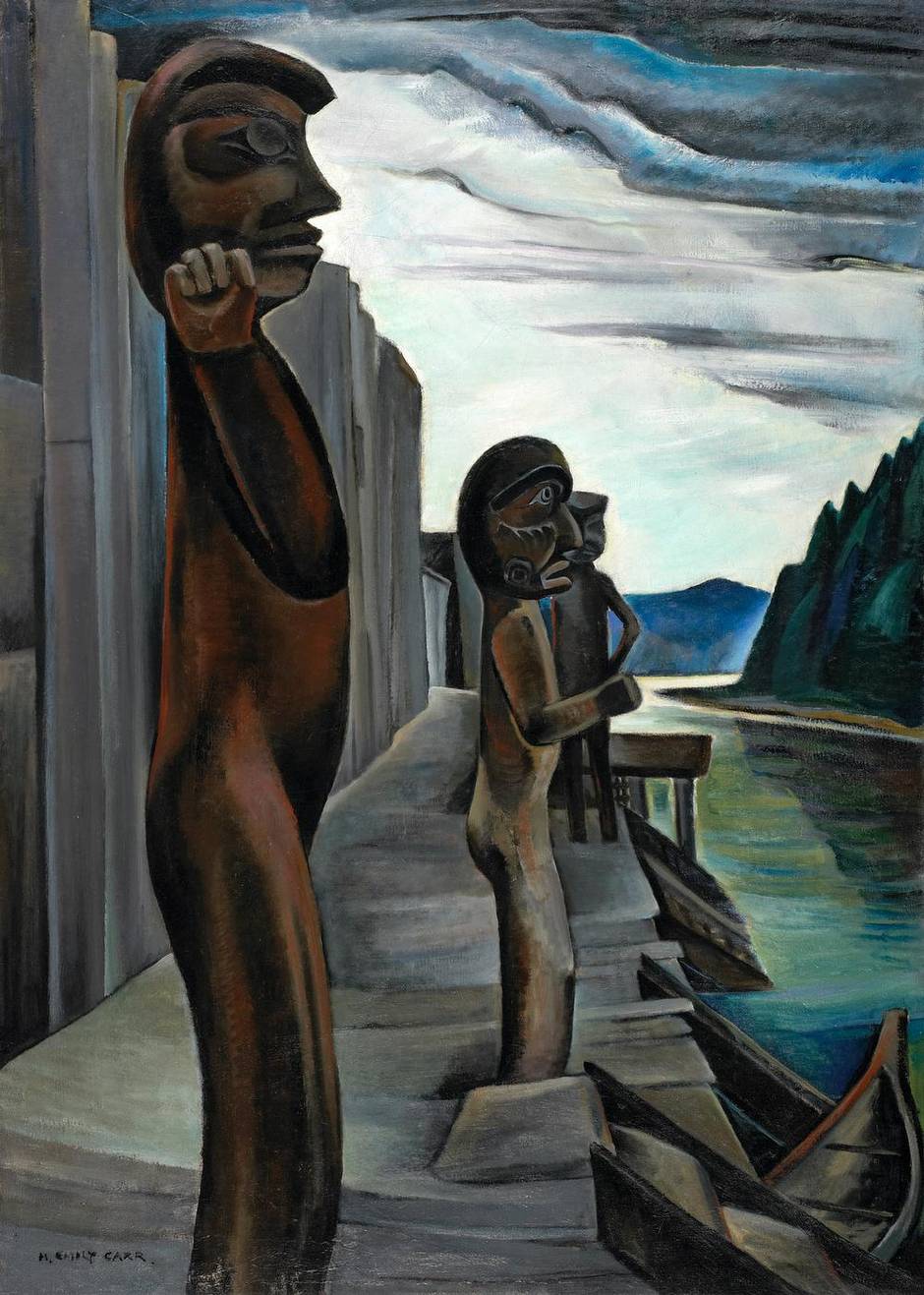 People have also asked me: Did Emily have someone special in her life? Did she ever fall in love? More often than not, that was their first and only question, as if this final piece of the jigsaw puzzle would somehow complete her accomplishment. The answer, by the way, is no, yes and who cares? Would that be our first question for an artist named Edward Carr? And must we always call her Emily?

Carr, in short, is presented in London as a person of insight, discipline, empathy and drive, a person who managed, perhaps at times inadvertently, to put her finger on the hypocrisy of her country’s “wilderness” fixation. This is her legacy to us. Like E. M. Forster’s A Passage to India (1924), Carr’s Klee Wyck (published nearly two decades later) does not question the essential colonial imperative, and for that she can today be found wanting. Yet, like Forster, she made it her business to try to understand what was being displaced, arguing for its humanity and value, and turning a scathing eye on her fellow colonials, with their superior airs and destructive intrusions.

This was not a New World. Carr tried to make Canadians see that. Now she will make Britons do the same. 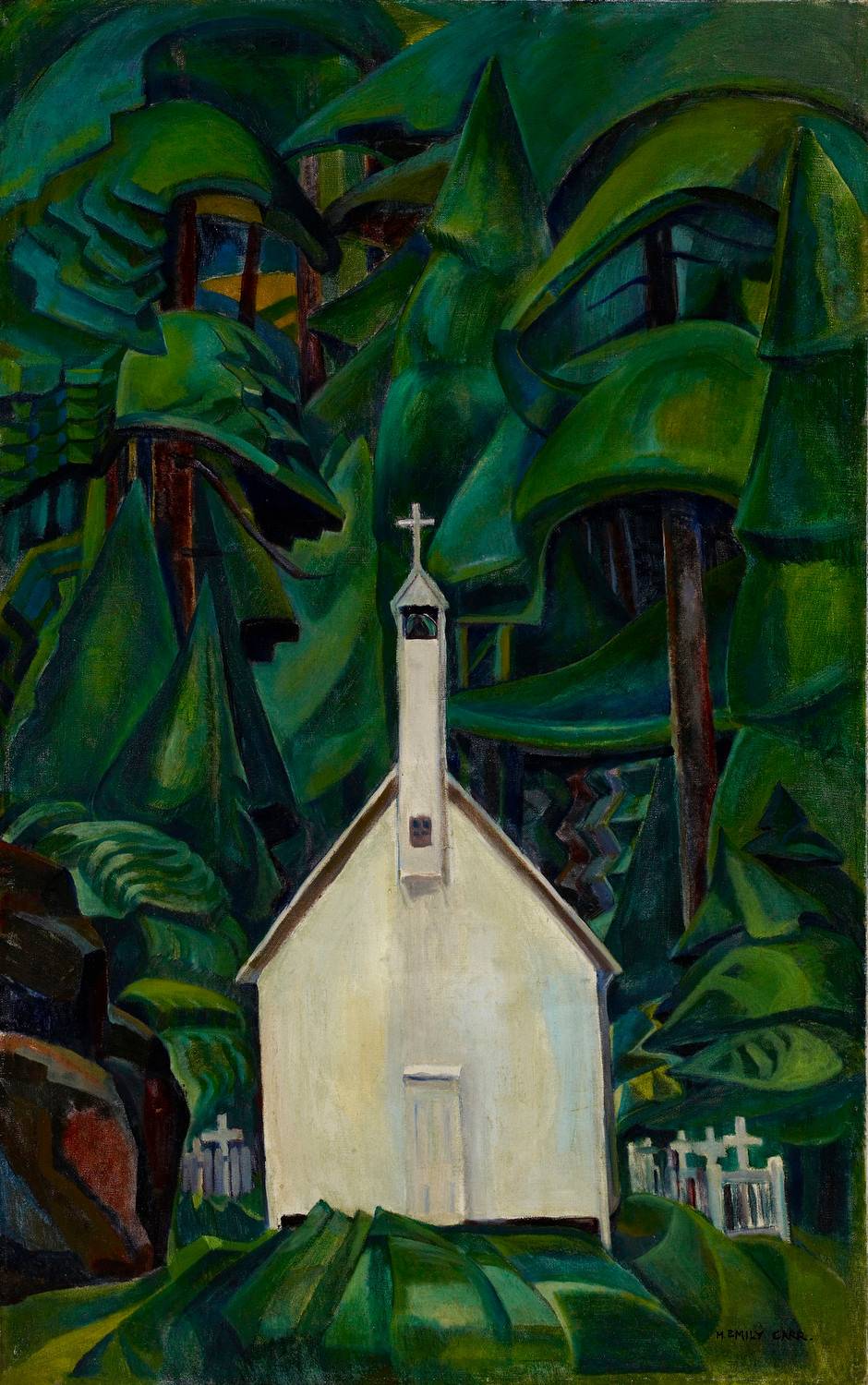 The Group of Seven’s leading light, Lawren Harris, bought this painting and had it hanging in his house in Toronto, often extolling its power and importance in Carr’s oeuvre. In the end, his rapturous appreciation started to get on Carr’s nerves, with her finally snapping that she wished he would pipe down about it, and that she had done many paintings far better. Perhaps she wrestled with the image: It was, after all, her definitive statement on the colonial presence in the landscape, with the stiff geometries of the white church set against the dynamic vortices of dark trees. She sketched this church at Friendly Cove (Yuquot) at Nootka Sound, and her initial drawing of it now lives a quiet life in a Vancouver private collection. When Carr visited Nootka, she is rumoured to have skipped the tour of the monument to Captain James Cook (who landed there in 1778), claiming she had better things to do. And so she did.

From the Forest to the Sea: Emily Carr in British Columbia runs at the Dulwich Picture Gallery in London until from Nov. 1 to March 8 (dulwichpicturegallery.org.uk). It will run at the Art Gallery of Ontario from April 11 to July 12, 2015 (ago.net).