Painting has been declared dead on several occasions in the past 175 years. In the mid-19th century, the culprit was identified as photography; more recently, critics claim it has been rendered an irrelevant relic by a host of movements, technological advances and idioms, from conceptualism and performance art to the Internet and digital video.

Yet painting has persisted, even thrived in recent years, as evidenced by the critical attention and commercial success garnered by painters as varied as Gerhard Richter and John Currin, Marlene Dumas and Elizabeth Peyton.

Helping to at once reflect and contribute to this flux is the RBC Canadian Painting Competition, a celebration of emerging painters marking its 14th anniversary this year. A juried competition, its first instalments, in 1999 and 2000, focused on artists from Toronto and environs, but then it went national in 2001, with the country being divided into three regions (Western, Central and Eastern), one winner named per region. This practice was abandoned three years later, when the jury named a national winner plus two regional winners. Another change occurred in 2007, when the regional winner category was scrapped and the jury picked both a national winner and two honourable mentions from the 15 finalists, regardless of location.

Here are this year's 15 finalists, five each from three regions, culled from more than 500 candidates by a 12-person jury of arts professionals administered by the Canadian Art Foundation. The winner and the two honourable mentions will be named in late November in Toronto, with the winner earning $25,000 and the runners-up $15,000 each.

Born in Bulgaria, Assa, 28, is an MFA student at Concordia University, Montreal. He graduated with a BFA from the University of Manitoba, Winnipeg in 2009.

Gathering in the forest 12 a.m. is from a series of works – arcylic on plexiglass is his "medium of choice" – featuring ambiguous narratives and settings rendered in a highly detailed way. "The scenes he invents depict gatherings involving people and animals as well as other human-like creatures or living forms, superimposed upon a classical landscape."

Chisholm, 26, has a BFA from the Nova Scotia College of Art and Design University in Halifax and an MFA from the University of Victoria. He was one of the 15 finalists for last year's RBC Canadian Painting Competition.

The high-contrast Intereference 1 uses spray paints designed for the auto industry, allowing for what Chisholm describes as "a smooth reflective surface that highlights small inconsistencies in the support or application of paint." Here, the viewer is presented "with what appears to be a solid black geometrical shape," but the "pulsating or bruising out of the space alters" the viewer's initial perception of the painting and "forces a reinvestigation" of it. The painting, it turns out, is built from transparent layers of blue and red.

Delisle, 35, obtained his BA from the University of Waterloo in Ontario, then enrolled as an MFA student at the Nova Scotia College of Art and Design University.

Delisle's paintings deploy "impossible perspectives, created through the amalgamation of many different views of a single space." In a recently published artist's statement, he says he's motivated "by a desire to explore what it means to paint … to understand what it is that I do as an artist." In depicting, say, a studio or a gallery, he "creates a kind of self-referential loop" involving both the act of painting and the spatial representation of the milieu in which the painting is occurring.

A Montreal native, Kastner, 28, received her BFA from Mount Allison University in Sackville, N.B., then enrolled in the painting program at the University of Alberta, Edmonton, where she earned her MFA this year.

Kastner sees herself as a sort of archeologist/surveyor/detective. "My work is concerned with images of excess, with the amassing of abundant amounts of stuff," she writes. It's "anchored in scenes of exterior or interior space, in particular the alleyway and the basement – neglected, in-between spaces in which the secret workings of homes and cities" are better revealed than what's available in "well-appointed living rooms and polished facades."

Acrylic and silkscreen ink on plywood

Trudel, 35, lives in Montreal, where she recently obtained her MFA from the University of Quebec at Montreal. Like Chisholm, she was among the 15 finalists for the 2011 RBC painting award.

Trudel's abstractions are distinguished by their "complex explorations" of colour and the perceptual tug-of-war between depth and surface – the painting as object and place of process. Here she intentionally relies on a highly restricted palette – in this instance, the primary printing-process colours cyan, magenta, yellow and black (hence the acronym CMYK) and diluted silkscreen inks – that she applies drop by drop in "a concentric spiral pattern." It's a process, the RBC judges observe, simultaneously methodical and arbitrary, with "rules and chance tightly entangled." 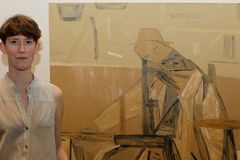