"Provincial artist" is a term of disparagement in some circles, signifying an individual with a lack of sophistication or ambition, narrow views and a fondness for the small and the local. It was a description David Alexander Colville happily applied to himself.

True, the artist, who died Tuesday at 92 of a heart condition, was to the big city born, in this case, Toronto, Aug. 24, 1920. But his parents moved to St. Catharines when he was 7, then to Amherst, N.S, near the Bay of Fundy two years later – and there, in Nova Scotia and New Brunswick, is where Mr. Colville stayed put, more or less, pretty much for the rest of his days.

He told an interviewer one time that he didn't like to be away from home for more than 10 days. So, fittingly, he managed to die in his house in the town – Wolfville, population 4,300 – he'd called home since 1971.

Yet from that perch Mr. Colville was able to become, in one critic's words, Canada's "painter laureate" with a substantial following internationally. His meticulously composed, extensively reproduced images of humans and animals, landscapes and things (guns, boats, cars, binoculars), eked out at a rate of four, maybe five canvases a year, are as recognizably "Colville" as a Warhol soup can or the "hypnotic splattered mist" of a Pollock painting (the last an artist with whom Mr. Colville, an unabashed figurative painter, seemed to have little truck).

"He really had a very keen eye about his environment," Charles Hill, curator of Canadian art at the National Gallery in Ottawa, noted Wednesday. "But I don't see it as something specifically Nova Scotian because the themes he uses are not tourist images. They're images and things you can see in most areas of the country and in the northern region of the United States."

Nevertheless, he added: "It took some commitment to say, 'Okay, I'm not going to go to Montreal or Toronto or New York; I'm going to work here,' and he was immensely successful carrying through."

The National Gallery was an early supporter, acquiring five of his works between 1954 and 1957. Today its holdings total 65. Mr. Hill thinks the gallery initially was impressed not only with "the quality of his work and its seriousness" but also that the paintings were in the figurative tradition.

"The gallery was feeling uncomfortable with abstraction at that point," he said, and here was an artist clearly familiar with the social realism of the 1930s and the magic realism of the late 1940s and early 1950s. He had the "courage to stick by what he was doing at a time when it was unfashionable to be a representational painter, and the consistency of the vision."

That vision "evolved over time," Mr. Hill said, "but very early he really determined what he wanted to do. There's this clarity of emotion – very intense emotion, but restrained at the same time – that comes out of his work."

For Tom Smart, a Colville friend, former director of the McMichael Canadian Art Collection and author of Alex Colville Return (2004), the Second World War was the crucible of Mr. Colville's life and art.

Graduating in 1942 from Mount Allison University in Sackville, N.B., home of the oldest fine arts department in Canada, he joined the army, then, in 1944, became an official Canadian war artist. In that capacity he documented the D-Day landings of June, 1944, the military's advance through the Netherlands and, in May, 1945, the havoc wreaked by the Nazis at the Bergen-Belsen concentration camp in northwestern Germany. "He would talk a lot about his idea of civilization being this very thin veneer that could be disrupted in the blink of an eye," Mr. Smart recalled.

"This being in Bergen-Belsen was strange," Mr. Colville wrote afterward. "As I've said to a number of people, the thing one felt was one felt badly that one didn't feel worse. That is to say, you see one dead person and it is too bad, but seeing 500 is not 500 times worse. There is a certain point at which you begin to feel nothing. ... It was a profoundly affecting experience. Obviously it would be, unless a person was an absolute fool. You were bound to think about this quite a bit."

Indeed, he did think about it. Again and again. On Wednesday, Graham Colville, the oldest of the four children the artist had with his wife of more than 60 years, Rhoda (née Wright), told The Canadian Press how his father "continued really for decades to have nightmares about the war, possibly until even quite recently. It made a very deep impression."

Columnist David Warren has noted that, for all the precise geometry and "outward placidity" of a Colville canvas, "death is always stalking," no matter how domestic or quotidian-seeming the tableau.

Unsurprisingly perhaps, Mr. Colville was "absolutely not" a religious man, according to Mr. Smart.

"I'd characterize him more as an existentialist. He believed in living life and what mattered was what you did in the here and now, and you are to be measured by how ethical and moral you are and how you built society and how you created stability and order on the planet."

At the same time, he was profoundly conservative (not to mention a lifelong Progressive Conservative, often politically active), a self-described "entrepreneur" with a love of fine cars and a belief in "engaged citizenship" that at one time or another saw him serve on the boards of the Canada Council for the Arts, the National Gallery and other organizations.

He designed the 1967 Centennial coins. He was chancellor of Acadia University in Wolfville for 10 years, starting in 1991. In return, he was named an Officer of the Order of Canada in 1967, a Companion 15 years later, a Canada's Walk of Fame inductee in 2002 and, in 2003, a laureate of the Governor-General's Awards in Visual and Media Arts.

Yet, for all this, Mr. Colville often would see himself as an outsider, especially to the art world at large. He told Globe and Mail art critic John Bentley Mays in 1983 that he "hated the idea of artists meeting and talking." Interviewed shortly after winning the Governor-General's Award, he talked about his art-making in the 1950s when "a lot of people thought I was just too stupid to realize realistic art was a thing of the past. So I was sometimes regarded with pity for being so stupid."

Stupidity, in fact, was something of a bugbear for the artist, Mr. Smart said. "I never saw him angry, but I expect he could be.

"He didn't have a lot patience for stupidity. He wanted people to be intelligent. He wanted rational decisions. He wanted things to be orderly, right down to the proportions and dimensions of his house, and when they weren't, I think he was intolerant. But that didn't translate as anger."

It's true Mr. Colville had his critics – Mr. Mays, for one, said his work relied on "a tiny bag of time-worn tricks" – but Mr. Hill thinks "the images still have a great strength. They don't appear dated. They very much speak of the world as it is today."

Mr. Colville was predeceased by his wife last December, and by their middle son, John Harrower. He leaves, as well as Graham, youngest son Charles and daughter Ann.

Alex Colville and the disturbance beneath the tranquility
July 17, 2013 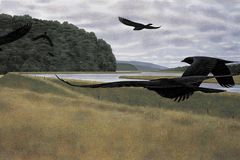 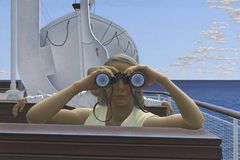 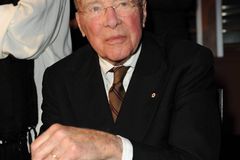