This story was originally published in March of 2003.

'I am calmer, older, uglier and fatter," says Toller Cranston.

Ah, a sentence that wears skates. It zooms right past you, all colour and abandon, with a look-at-me flourish in the delivery. There's sarcasm here, draped with a floating cape of self-adulation, a ruffle of amusement, a flash of sparkly ego bits.

Toller Cranston may be older -- almost 54, as he reminds me more than once -- but forget about the other adjectives. On a recent and rare trip to Toronto from San Miguel de Allende, Mexico, where he has exiled himself for the past 10 years, Cranston held court, like a former king who has come to check up on the country that he likes to think never quite understood him.

His sentences are purple; his clothes, black. He is the artist for whom being misunderstood is a delicious source of identity.

In the downtown gallery that bears his name, a clean space of hardwood floors and white walls, a Persian silk rug has been rolled out in the front room for the occasion of the interview. A worn-leather armchair and a paint-splattered office chair have been carefully placed in the centre. He perches on the latter. I take the armchair.

Everything in life, darling, should have a stage setting.

"There wasn't another creature like me," he says, running his hand through his swept-back hair, his face, tanned slightly and boyish, lighting up with a private sort of smile. "I was an artistic freak."

There it is again -- a perfectly executed spin of a statement.

"I'm not kidding," he continues, his blue eyes wide and beseeching. Then, in response to his own self-pitying remark, he flings out another, steelier comment. "Basically, I don't question what it is I have. You have it, you do something with it," he says, throwing me a grownup look of resolve. "I don't waste my time thinking about why I do what I do."

What he does now, exclusively, is paint, 12 hours a day, seven days a week, in a studio in a 350-year-old house in the centre of San Miguel, a hybrid community of artists, tourists and "big, ugly Americans who build 15,000-square-foot houses for just two people," Cranston says. His oil paintings, priced from $5,000 to $20,000 and sold internationally, are large and fantastical, often featuring Harlequins and strange creatures. His oeuvre totals more than 30,000 paintings, not including prints and drawings, he says. "My work is windows into another world that no one else sees," he proclaims. "I am a sophisticated primitive artist."

It's not every day that an artist has the confidence to acclaim his own work. Without a hint of hesitation, he compares himself to great artists. "Vincent van Gogh would be a really good example," he says, leaning forward for emphasis. "It was just not realistic for people and the establishment in the time in which he lived to understand what he was doing. They did just not have his vision." He shifts sideways in his chair, reclining slightly, one leg casually crossed over the other. He sighs. His voice has a drawl to it, a suggestion of ennui, as if he has long come to terms with his sense of superiority and the explanations it requires.

Artistic arrogance is the costume Cranston dons to strut through the world. "It never entered my head not to be taken seriously as an artist, not to be renowned," he says. He once wore a peacock outfit in a skating performance and still, at least in spirit if not in dress, he likes to fan out his plumage. "I was the first to reinvent skating," he tells me in one of many earnest moments.

Cranston is not so much an artist as a performance artist. Known also for his colourful memoirs about his escapades off the ice, including a cocaine addiction, he is always looking for a stage. He is forever that skater in glittery spandex, the six-time winner of the Canadian men's title, the bronze-medal winner in the 1976 Olympics, the man who seems otherworldly as he glides in fluid movement over ice.

He is his own work of art.

"It's very hard to get over a career," he admits during an exchange about skating. Asked if he derives as much pleasure from painting as he did from his career on ice, he pauses before responding in a breathless manner. "The mead that the Nordic gods drank, that pure honey or whatever it was, that euphoria, that instant fix, that hit one gets from performing well when you're supposed to, that's hard to replace. Painting is not really a high but it's a state of extreme pleasure, a certain frequency."

Before he left for San Miguel, he had been coaching figure skaters. But there were frustrations, and Cranston never shied away from confrontations with honchos of the Canadian Figure Skating Association. He is unhappy with the direction of the sport. "The dial has turned," he says. "Gone are the days when you think about the music and how a performance works with it. Now it is about elements. In my day, the triple axle, a quad jump, these were seen as a mirage in the desert." Skaters today are more like gymnasts, he sniffs.

He had also had a legal dispute with CBC Television when he was let go after being hired as a commentator. In 1994, he sued the network and won a settlement of $60,000. "Everything was falling apart in my life," he says.

Does he feel that Canada has treated him poorly? "I just became a huge star in [Canada's]Walk of Fame. Didn't you know?" he says with acid sarcasm. He waves a hand in the air, dismissing any thought of bitterness. "It is not the fault of the country," he says, gazing off into the middle distance. "Our country is too new. The DNA is too new. The brains are too new." In the seventies, at the height of his fame, he considered defecting to Russia or France, he says. "But I wasn't going anywhere but here," he adds. "As unusual as I was as a specimen in Canada, Canada was great for me."

This is Toller the philosopher. He is prone to bitchy asides, but he recovers, always, with a comment that takes the long view of his life and travails. There are no regrets, he says. "Mistakes are never mistakes if you can come out okay at the end," he offers sweetly. Which is not to say he is not looking for vindication where he feels it's warranted. He is currently contesting his mother's will, he blurts out, apropos of nothing. Born in Kirkland Lake, Ont., he has two younger brothers and an older sister. He didn't speak to his mother for years, he offers, but when she was near death last year, he travelled to Ottawa to visit her. "I spoke to her at her bedside for an hour. I wanted to know what the problem was in our family. I wanted some answers." He didn't get any. The next day she died.

He then discovered that he and a younger brother, Goldie, were not mentioned in her will. They are the two siblings who have done well financially, Cranston says in an attempt to explain his mother's decision. "This was a final harpoon from the grave," he says dramatically. "I want to deflect this last dart that struck me between the eyes."

Talking to Cranston is like travelling through a country of many, different landscapes. You never quite know where you're going to end up.

"I'm considering having everything jacked up," he sighs suddenly when his photograph is being taken. "Now they're doing the ass, you know," he says languidly, adjusting his belt on his thin frame. "But I think I'll start with the chins." He smiles wanly and pats the little wattle under his jaw.

He moves through a discussion of his past, present and future as though it were a grand epic someone else has written, which makes him enormously sentimental about himself. "I suffer from an incurable and insatiable curiosity for all things," he says near the close of the interview. "It's called pleonexia," he explains seriously.

When he lived in Toronto, his house in the Cabbagetown neighbourhood was filled with a vast array of objets: cherubs hanging from the ceiling, hundreds of plates, needlepoint cushions, an elephant's foot table. It was once described as "a cross between a Russian Orthodox church and a bordello." But in a purge, he put it all up for auction. "I needed to wean myself from this obsessive compulsion I had about needing things." It worked for a while. Then he began collecting again. His house in San Miguel, which he bought after viewing 73 other properties, is filled with a new array of weird and wonderful things.

So is he happy now? He professes to no longer be interested in fame and wealth, not the way he once was. "To say I'm happy sounds like I'm clicking my heels together or something," he offers. "I have great concern for the future. It's not like the worst is over."

The drama, in other words, continues. 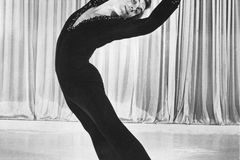