Twenty-five years ago this summer, an unusual postcard arrived on the doorstep of a lonely young man’s London flat. The recipient, Griffin Moss, was himself a maker of postcards, while the sender, Sabine Strohem, designed postage stamps for a tiny chain of islands in the South Pacific absent from even the most detailed of maps.

Although they’d never met in person, Sabine said she’d “been watching [Griffin’s] art for many years” and, when pressed, explained that she, on occasion, shares his vision: “When you draw and paint, I see what you’re doing while you do it.”

This marked the start of an “extraordinary correspondence” and one of contemporary literature’s most fanciful love affairs – one that spanned continents, history, and even, perhaps, parallel universes. The book that told their story, Griffin & Sabine, as well as the five that followed, are rather difficult to explain to those who haven’t read them, but are beloved by the millions around the world who’ve spent the past 25 years reading through their mail. 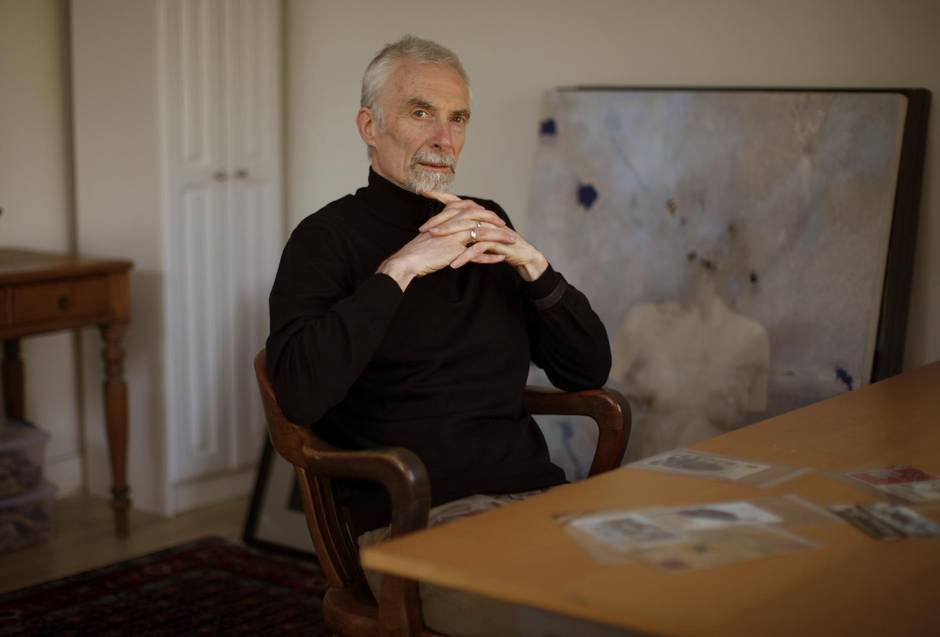 Author Nick Bantock, best known for his series of Griffin and Sabine books, is photographed in his Victoria, B.C., studio on March 16. (Chad Hipolito for The Globe and Mail)

“Somebody asked me, the other day, to write down what the [Griffin and Sabine] books were, actually,” says their creator, Nick Bantock, on the phone from his home in Victoria. “It’s initially, obviously, a love story, but it’s also a mystery, a pursuit of self-understanding, a passion masque, a struggle to awaken, a hero’s journey, or two, a chess match with darkness, a sensual dance with duende, and an alchemical marriage.”

A rather strange description for some rather strange books. Completely epistolary in its telling, the story of Griffin and Sabine (and, later, Matthew and Isabelle) is chronicled through a series of postcards and letters, some of which come stuffed into envelopes glued to the page, which the reader must remove, unfold and read, as if snooping through the neighbour’s mail. (It was a novel idea at the time that, having recently reread the original trilogy for the first time in over a decade, now feels almost quaint; what was once innovative now seems like an artifact from the distant past, adding a fascinating layer to the reading experience.) 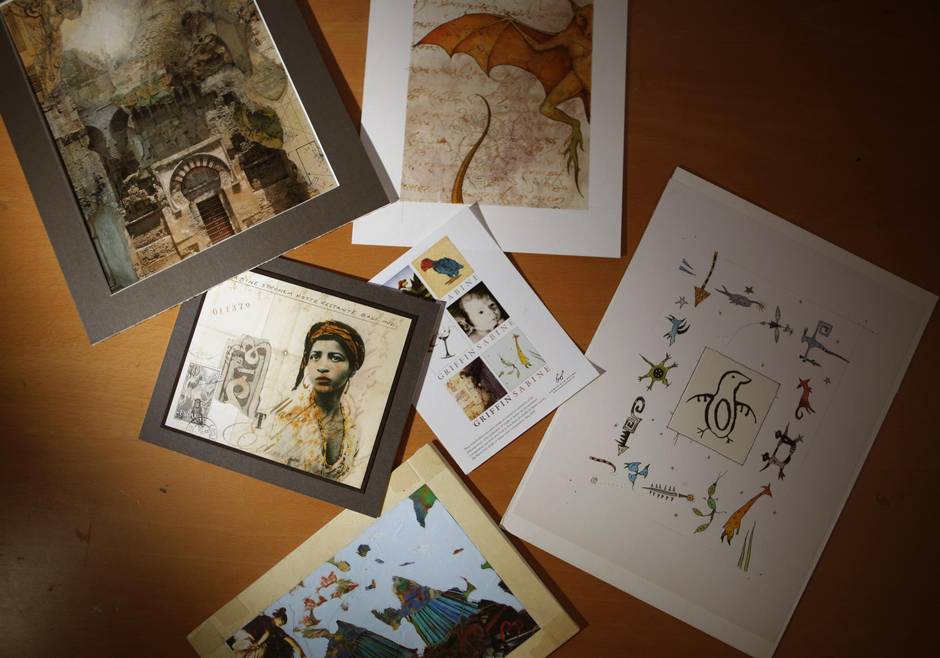 Work by Nick Bantock, a British author and artist living in Canada. (Chad Hipolito for The Globe and Mail)

The seventh book in the series, The Pharos Gate: Griffin & Sabine’s Lost Correspondence, which was published this week, serves as the “passageway” or the “bridge,” as Bantock puts it, between 1993’s The Golden Mean, which concluded the original trilogy with the lovers agreeing to rendezvous in Alexandria, Egypt, and the beginning of the fourth instalment, 2001’s The Gryphon. Like its precursors, the book is told through letters postmarked from exotic locales around the world – Papua New Guinea, Spain, Indonesia, Turkey, Sri Lanka – as the pair grow closer to Egypt, still pursued by the malevolent Victor Frolatti, who wants to study their psychic connection for his own nefarious purposes.

“When you have characters that strong inside you and you’ve not put the microphone in their hand for some time, they’re still functioning, they’re still existing in that internal world,” he continues. “And the moment I turned my internal focus on them, it was as though they were flung out onto the stage.”

When the first book was published, Bantock was an artist, designer and pop-up book author living on Bowen Island, B.C. (Originally from England, he moved to Canada in 1986: “Margaret Thatcher and I didn’t get along.”) While visiting the offices of San Francisco publisher Chronicle Books, Victoria Rock, who ran the children’s book division, spotted a mock-up for Griffin & Sabine in Bantock’s overnight bag, beneath a pair of socks. She showed it to her colleague, Annie Barrows, then a junior editor with the company. 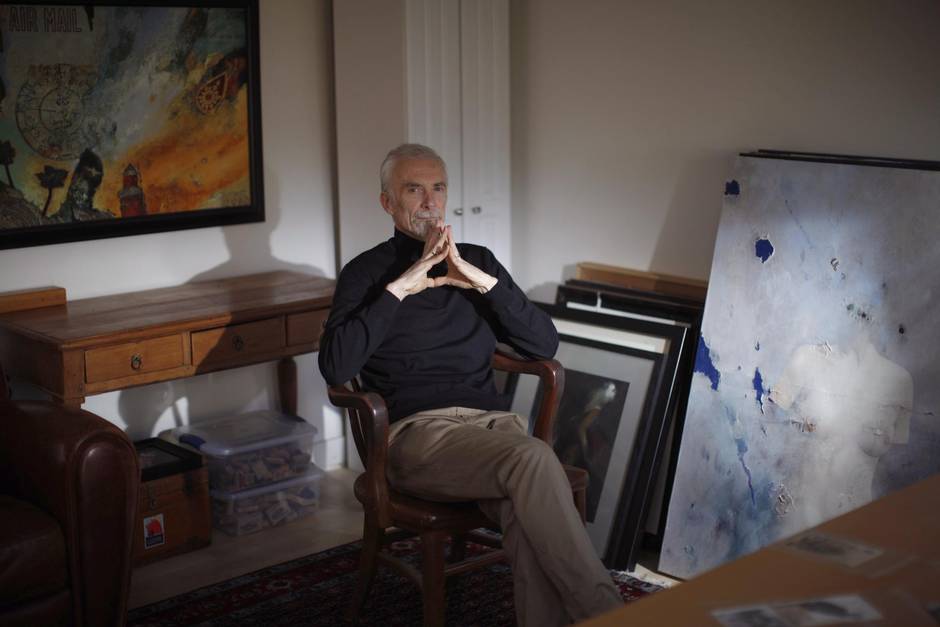 When the first book was published, Nick Bantock was an artist, designer and pop-up book author living on Bowen Island, B.C. (Chad Hipolito for The Globe and Mail)

“I didn’t know enough at the time to realize how completely crazy it was to attempt this,” says Barrows. “This was a novel – an illustrated novel. That was just revolutionary at the time. And I really do believe that [it] has had a profound impact in both what people are willing to entertain as readers, and, also, what the industry looks at and says is viable.”

Still, at the time, no one at Chronicle suspected that Griffin & Sabine would become one of the company’s most successful titles; the original print run was a relatively small 10,000 copies, though interest grew in the months before publication as advance copies began to circulate. The first three books alone spent more than 100 weeks on The New York Times bestseller list and sold more than three million copies. (A movie version has been in perpetual development.)

“I think a lot of people, when they have success, suffer from this gap between who they feel they really are and who they’d like to be in the eyes of other people,” says Bantock. “When I started, I was a painter. That’s what I was. I made images. And then I was lucky enough to find another arena in which to express myself, and I really have spent the next 25 years learning how to be something that people were calling me. They were calling me a writer, but in fact it took me a long time before I felt remotely comfortable with that role. I’m very comfortable now with not being part of the literary scene, or being a part of the fine arts scene, but, actually, being in this interesting half-world between the two.”

Bantock, who is now 66, thinks he has “another good 10 years of solid creation in me,” and currently has a handful of projects at various stages of completion. But The Pharos Gate, he insists, definitely marks the end of Griffin and Sabine’s correspondence.