"Are you doing Nuit Blanche?"

It's a question being asked by hundreds of thousands, maybe millions of Canadians right about now. Perhaps nowhere with more, well, urgency and innate wariness that precedes the start of anything significant than in Edmonton and Toronto. In Edmonton because the Alberta capital, Canada's fifth-largest population centre, is hosting its first-ever Nuit Blanche on Saturday, beginning at 7 p.m. MT and running until 4 a.m. Sunday. In Toronto because the Ontario capital, Canada's largest city, is mounting its 10th annual Scotiabank Nuit Blanche, a sunset-to-sunrise epic starting at 7:15 p.m., ET on Oct. 3.

Toronto is not the Canadian metropolis with the longest-running Nuit Blanche. That honour is held by Montreal, which, inspired by the original Nuit Blanche ("white night") in Paris in the fall of 2002, hosted the country's first free "all-night contemporary art thing" in late February, 2003, and has kept on keeping on ever since.

But it's Toronto that is now considered "the mother ship of Nuit Blanche," not just nationally but internationally, observes Gwen MacGregor, a Toronto multidisciplinary artist who has participated in Scotiabank Nuit Blanche twice and, in 2014, published a research paper on Nuit Blanche Toronto as perceived by artists and curators as part of her cultural geography studies at the University of Toronto.

Influence? Toronto's success has sparked Nuit Blanche-like startups in at least 15 Canadian communities in the past five years, including Huntsville, Ont., and Kamloops, B.C. This weekend alone, the debut of Edmonton's long night's journey into day is being "matched" by reprises of Nuit Blanche Winnipeg, Nuit Blanche Saskatoon and Sydney's Lumière and Antigonish's Antigonight in Nova Scotia. 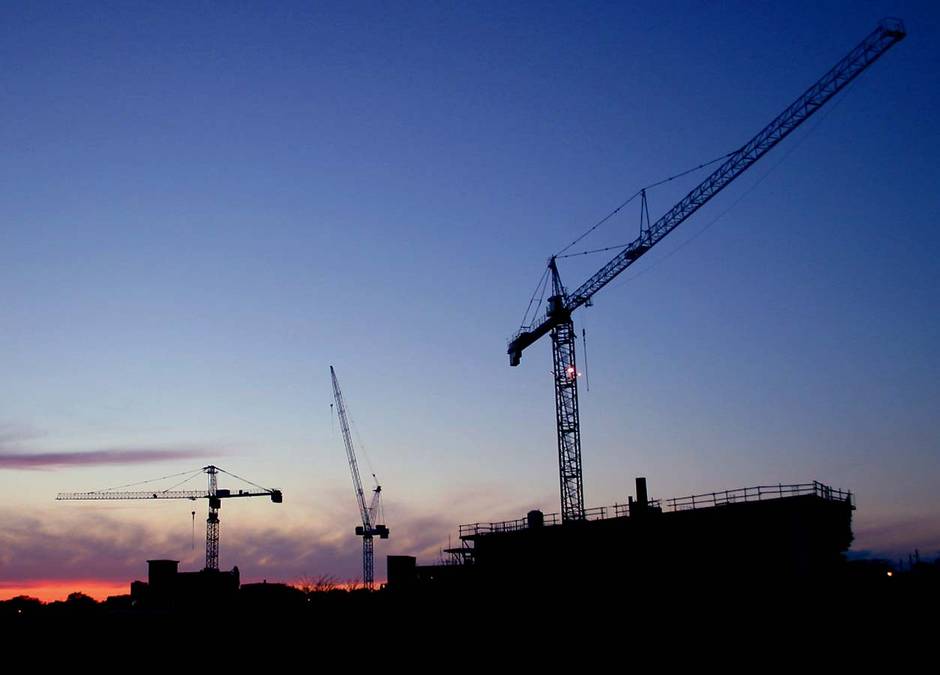 But with growth comes growing pains. And questions. Has Nuit Blanche Toronto become too big, too successful, with too much art, its raison d’être as an accessible entrée to and celebration of contemporary creativity and culture now just so much patina on what has turned into a sprawling street party/circus? Has it become, as MacGregor argues, more an economic development priority – more about filling hotel rooms, lounges, restaurants, shops – than a vehicle of “creative criticality” for artists, curators and art lovers? Has it translated into richer careers, wider exposure and greater name recognition for artists, more visitors to local galleries and museums, higher enrolments in postsecondary fine arts programs?

And what about legacy? Is it enough for Scotiabank Nuit Blanche to be, in essence, a transitory, ephemeral, evanescent happening? Or does there need to be a more permanent, perhaps material “residue”?

Beginning in 2013, Nuit began to extend (briefly) the exhibition of some installations it thought could withstand day-time scrutiny minus the Nuit Blanche frenzy and hype. This year, 14 projects, a record, are being held over through Oct. 12. Is this enough? (Ipsos reports that last year 270,000 persons visited 10 “extended projects,” exclusive of attending Nuit Blanche). Should more resources perhaps be “funnelled into a broader, sustainable strategy to install an awareness of contemporary art in the more general cultural landscape,” as one Toronto critic has suggested? Or does the accumulation of these happenings, the climate they create year upon year, constitute the legacy?

These, of course, are questions pertinent to a mature organization. For new-kid-on-the-block Edmonton, the issues are simpler. On a budget of about $750,000, $250,000 of which is coming from the civic government, it is presenting 31 projects in the city’s downtown. They include Brandon Vickerd’s Dance of the Cranes (four illuminated high-rise construction cranes, their movements co-ordinated to music), Half the Air in a Given Space by 2001 Turner Prize-winner Martin Creed (hundreds of balloons stuffed into two pedways) and Yoko Ono’s Wish Tree/Imagine Peace (individuals write their dreams and hopes on paper, then tie them to 121 trees placed in a large outdoor square; later the trees will be planted throughout Edmonton, the tags sent to the Imagine Peace Tower in Reykjavik, Iceland). Will the weather co-operate? Are the projects attractive enough, varied enough, to draw 75,000 or so visitors downtown? And once they are there, can they have what Nuit Blanche Edmonton chair Ruth Burns calls “a shared communal experience?”

Burns, a former curator at the Art Gallery of Alberta, acknowledges that “there continues to be a lot of negative perceptions about downtown [Edmonton]” – in the past 40 years at least, it has tended to empty out after 6 p.m. – “even though it has become much more vibrant and is changing rapidly.”

To help the event’s prospects, Brown’s small, non-profit, grassroots organization hired Torontonian Dave Dyment as its curator/adviser. Dyment has participated in every Nuit Blanche Toronto, sometimes as a curator, sometimes as an artist, other times as a member of its artistic advisory committee. Directly overseeing 11 of Edmonton’s 31 projects, Dyment said he simply “started with the premise of ‘what would I want to see?’ I maybe tried to choose works that were fairly direct, privileging humour and play. I think the bulk of the projects work on a variety of levels, none of which are inaccessible.” 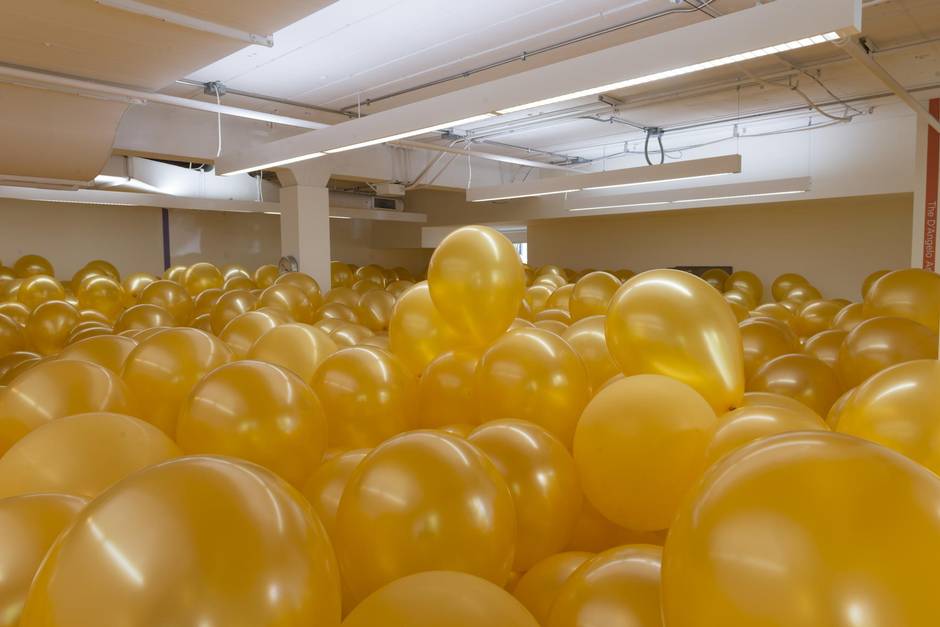 At Edmonton’s Nuit Blanche this weekend will be Half the Air in a Given Space by artist Martin Creed, which features hundreds of balloons stuffed into two pedways.

Don’t expect to see a Nuit Blanche Edmonton 2016. The plan right now is to run every two years, according to Burns, alternating with Nuit Blanche Calgary, which held events in 2012 and 2014. “The art world has this tradition of the biennial; it’s a known, familiar format,” she remarked. Moreover, “as a free, resource-intensive event, it’s more sustainable for our non-profit to [do it in alternate years]. In terms of audience development, we have the opportunity to produce smaller-scale … programming in the off years [to permit us] to connect with audiences and educate and grow our base in and around Edmonton.”

Ten years out, it’s unlikely Toronto would entertain the biennial route for its Nuit Blanche. Indeed, preparations for the 2016 edition are well under way, with an announcement of its curators due in a couple of months, says Kristine Germann, programming manager (acting) of city cultural events for Toronto. (Unlike in Edmonton, Nuit Toronto is co-odinated by Toronto’s Special Events Office, a subsidiary of the city’s economic development and culture division.) Meanwhile, “we’ve engaged most of our curators for 2017 and are already working on 2018.” Not bad, in other words, for an event originally conceived as a one-off to mark the 2005-06 T.O. Live with Culture celebration, and whose organizers predicted would lure maybe 250,000 night owls.

Today, Germann likes to say Nuit Blanche organizers “think of the event as for everybody between one and 99.” But, in fact, 18-to-34-year-olds have constituted the single largest demographic of visitors to Scotiabank Nuit Blanche every year since 2007, anywhere from 54 to 67 per cent of total audience. Undoubtedly, many in this demographic have a genuine interest in the myriad forms of contemporary art and are keen to experience it outside the confines of artist-run centres, commercial galleries and sepulchral museums.

But there is also a sizable contingent that, in MacGregor’s words, has come to see the event “more just as a night to go out and be on the street all night long.” In recognition of this, at least 20 establishments in downtown Toronto last year received permits from Ontario’s Alcohol and Gaming Commission to move their last calls to 4 a.m. on Oct. 5 from 2 a.m. (As of this Sept. 21, the AGC had received two applications for extended hours during this year’s Nuit Blanche.)

MacGregor thinks that the perception in recent years of Nuit Blanche as a boozy bacchanal with a garnish of visual arts “is an indication of a bigger issue.” Toronto, to her eyes, is “a pretty regulated city in terms of what we’re allowed to do and when we’re allowed to do it. One of the great things about Nuit Blanche Toronto is that there seems to be a bit of a relaxing of those things.” It more or less gives a once-a-year sanction to moms and dads, brothers and sisters, to roll bleary-eyed into bed at an hour when they would usually be waking up or sound asleep.

“People are kind of hungry for that, so why not have more things that are arts-related, not specifically contemporary art, but with another kind of focus that’s also a late-night or all-night event?” says MacGregor. “I think it would alleviate a lot of the pressure on Nuit Blanche” while possibly restoring some of the magic of the event’s earlier years when you could be “out at 4 in the morning, feeling safe and festive and looking at art and wandering with your friends.”

For Dyment, the idea that Nuit Blanche Toronto has become “just a bunch of drunk people on the street” is wrong. Besides, “when did the art world become teetotallers? We welcome alcohol in most other environments. If the suggestion is that audiences aren’t interested in the work, that has never been my experience. I’ve had people sit on cold floors to watch my hour-long ambient videos in their entirety. The same works shown in galleries would maybe get 10 minutes of the audience’s attention.”

Germann, a graduate of Vancouver’s Emily Carr University of Art + Design, says she is “pretty okay and actually quite delighted that [so] many people want to come out and … be engaged by contemporary art.” And “for that experience of being a little bit more alone with the art,” she recommends waiting until after 4 a.m., when there is a pronounced thinning of the crowd.

What is of greater concern for her, it seems, is to keep “presenting artwork that challenges us as producers,” that sustains the idea of Nuit Blanche as both “living museum” and “artistic and curatorial laboratory.”

Ten years on, the Toronto event functions as “a pretty well-oiled machine,” Dyment noted. “But I never get the impression that the Nuit Blanche staff rest on their laurels or come to the table with a ‘we-know-what-works’ attitude. That would be the kiss of death.”

Certainly there will be no lack of interesting art Oct. 3-4, from Harbourfront and Allan Gardens to Queen’s Park Circle, the Art Gallery of Ontario and Rosedale Heights School of the Arts. For the first time, Nuit Blanche is giving over an entire exhibition zone to one artist, New York/Paris-based street maestro JR, who is doing installation, photo, film and video work at City Hall, the historic Campbell House (University Avenue and Queen Street) and Nathan Phillips Square, among other locales.

To celebrate its 10th iteration, Nuit also is co-producing 10 for 10th, a multipart extravaganza of performance pieces, interactive installations, sound sculpture and a 50,000-piece LEGO construction, one work per site at Artscape Wychwood Barns, the AGO, the Ontario College of Art and Design University, the Gladstone Hotel and six other locations. Also new this year: Nuit’s first mobile volcano (with real lava), created by Robert Wysocki, located on a barge off Sugar Beach Park.

Germann indicates that the audience this year “will probably stay somewhat the same” as last – that is, 800,000 or 900,000 locals complemented by an estimated 200,000 tourists. If Nuit Blanche sees any room for growth, it’s going to come from the out-of-towners. “That’s the audience we’re trying to build.”

“A festival can devolve and lose quality,” observes Barbara Fischer, executive director/chief curator of the Justina M. Barnicke Gallery at Hart House (University of Toronto). An exhibitor at every Nuit Blanche since its inception, Fischer doesn’t think this has happened with the October event – an opinion echoed by Dyment, who says he usually has “half a dozen truly incredible moments each year” when he would be content just with one.

Nevertheless, it would be good, Fischer said, to have a calmer complementary contemporary art event occurring perhaps every two years and lasting at least a month. “Art works better when there’s more duration; it mobilizes the mind more than what happens in a party atmosphere.”