Katerina Cizek is the Toronto-based director of the National Film Board's Highrise project, and a visiting artist at the Massachusetts Institute of Technology's Open Documentary Lab.

Canada is becoming a highrise nation. Canadians, more of them every day, travel home in an elevator, to their unit in a row of buildings sometimes located in cities but often in the suburbs.

We are fast joining the rest of the world in becoming vertical dwellers. Because we rarely acknowledge our highrise identity and often don't notice it, we have little understanding of the impact it has on how we govern ourselves, plan our cities and raise families; we ignore the pressing need to redefine Canada as a nation of highrise-dwellers in the 21st-century.

For most of my life, I've disliked highrise buildings. It's with considerable humility that I've come to see what is directly in front of me. I've spent the last seven years investigating the highrise life, globally, as a documentarian in a unique experiment, the National Film Board of Canada's Highrise project. We set out to use these often-overlooked buildings as a storytelling prism, to understand ourselves as a new urban species.

When Canadians think "highrise nation," we tend to look elsewhere, and imagine the density of Singapore, New York City or Hong Kong. Yet, Toronto's downtown St. James Town neighbourhood has a density of 63,765 people per square kilometre, compared with Hong Kong's densest district, Kwun Tong, at 57,250. And even on the outskirts of Toronto, a strip of 19 rental highrises at the north end of Etobicoke's Kipling Ave. that we've come to know well in our project holds just over 35,000 people per square kilometre. You'd never feel it driving by. 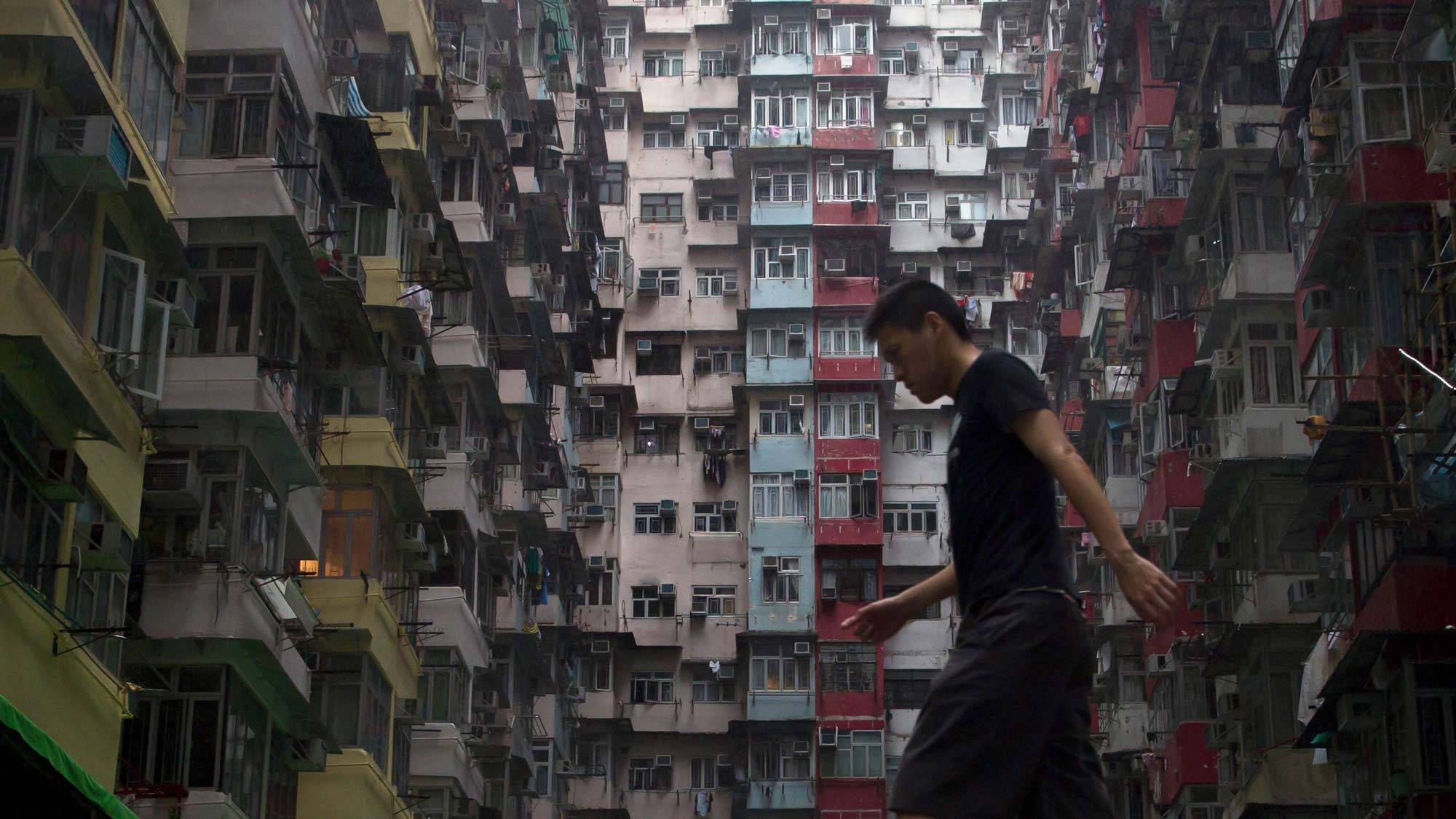 Experience Universe Within: The NFB's look at our invisible digital lives in the global highrise

Little attention has been given to another kind of vertical housing, the privately owned, generic, concrete postwar rental apartment building. We don't have any public consciousness of how many of them there are in Canada, and what it means for the country. I was shocked to learn that there are 1,189 of these buildings in Toronto alone, and most of them in the suburbs, built between 1947 and 1985. Between Niagara Falls and Oshawa, Ont., there are close to half a million apartment units in postwar buildings alone. They stretch across the cities of Alberta and Quebec, are scattered across Ottawa and the Maritimes. They are invisible to many of us. We just don't see them with the naked eye.

My search for this vertical "new normal" began in 2008, both around the world and in my neighbourhood.

My documentarian colleague, Heather Frise, and I postered the halls of an Etobicoke market-rent highrise tower, asking adult residents to join us for a meeting in the underused common room tucked behind the elevators on the main floor. We offer a free photography workshop, and slowly an unlikely group gathers, mostly women, from Jamaica, Trinidad, Ghana and the Indian state of Gujurat, six adults with little in common. We want to learn how they feel about where they live, through their photography and stories. Hope is furious about the dangerous, broken elevator. Priti is frustrated with the garbage strewn everywhere. Maggie is upset that the children and youth have nowhere to play. Meanwhile, rent is high, they complain, and goes up every year. We're overwhelmed with circular arguments about whose fault everything is, and how to confront the domineering property manager. This is an angry place.

Slowly, the verbal arguments give way to a focused, resolved collaboration to build a public group exhibit of photography illustrating their concerns and points of view. Later, we investigate the digital lives of all the residents, conducting interviews about their Internet use in 13 languages. The resulting statistics – and stories – are astonishing. I am sure that the low incomes here mean low broadband connectivity.

I am wrong. This place is wired.

Angel, a newly-arrived young refugee, is holed up in an apartment that is bare, except for a chair, table and a laptop computer. She also says she would die without her iPhone. Our research finds no one with a significant connection to someone in downtown Toronto – only 20 kilometres away – but many have daily contact with friends and family in other suburbs, and all are linked to loved ones on the other side of the world.

Conceived in England, the postwar tower block took advantage of the newly perfected poured-concrete slab, and cookie-cutter building plans spread quickly across Europe, North America and the Soviet empire, where it was proposed as a socialist answer to an urbanizing planet with a swelling population.

By the eighties, these buildings came to be seen as failed social and architectural experiments. As the Berlin Wall came tumbling down, so came the call to demolish these buildings. Concrete was fast growing old.

The age of the glass condominium was dawning. Apartment buildings would no longer be just tools for housing, but also instruments of financialization, largely because units would now be sold as investments, rather than as places to live. For example, recent research suggests that nearly a quarter of condos in some densely populated areas of downtown Vancouver are empty or occupied by people who are not permanent residents. Up to half the condos around Central Park in New York City are owned by out-of-towners, sitting vacant most of the year.

We're seeing unprecedented vertical development in cities around the world, but much of it isn't intended as decent accommodation for the people who actually need somewhere to live.

On the other side of the spectrum, the poor are being displaced and crammed into buildings at the edges of our cities. Once seen as a venue for equitable public housing, the downtown highrise has become a tool to gentrify the slum, an apparatus for the privately driven development of the new city. Housing activists in Canada and around the world are struggling ideologically and pragmatically with the shifting nature of what poverty looks like: It is increasingly vertical.

In Mumbai, former slum-dwellers in the city core have been relocated to highrises shoddily built on reclaimed swampland 20 kilometres north of downtown. After using all their savings to secure these units, many residents are displaced again when the buildings are deemed illegal and torn down, in a complicated financial scheme that profits developers and dishonest officials.

Next to the largest informal settlement in Africa, the Nairobi slum of Kibera, sits a United Nations-funded highrise development originally promised to rehouse slum dwellers. It never accomplished that goal. Now, it has been sold, unit by unit, to largely middle-class workers from other parts of the city.

Gated highrise "new towns," with names and themes such as "European Harbour New Town" and "Canada Town," are popping up on the peripheries of most Chinese cities. They are planned and executed by private developers in concert with newly empowered local governments, with little regard for public or civic interest. They evoke an aspirational lifestyle, one that, in reality, few Chinese can ever attain. In Egypt, highrise satellite cities rise from the desert, all linked to cronies of the ruling regime. Swaths of money exchanged hands to build these places, yet most now sit empty, collecting dust, being swallowed back by the desert sands.

Dr. Emily Paradis, an urbanist at the University of Toronto, has done substantial research into the "vertical poverty" of Toronto's suburban neighbourhoods. She says that the income divide between renters and owners has widened dramatically in the past 20 years. The need for affordable rental housing has multiplied, but there has been almost no new construction of rental buildings, and no new social housing. The aging rental buildings, meanwhile, are housing many times the number of people they were built to accommodate.

Architect Graeme Stewart, awarded the Jane Jacob Prize last year for his civic contribution to Toronto, has found illuminating examples around the world of how to make highrise neighbourhoods liveable, affordable and humane. We need to apply his "tower renewal" initiative across Canada's urban landscape – by using transit to connect isolated highrises to other parts of the city, by enriching highrise neighbourhoods with affordable housing, economic development and social services, by nurturing environments for local entrepreneurship and improving childcare. The buildings are aging, and need renovation as well as maintenance. We must draw on the incredible human resources of the people who live inside.

As we conclude the highrise project, what we've discovered gives us a window on what may happen in the towers rising today, the glass condos. We need to stop demonizing or glorifying our highrises, and start running Canada as the highrise nation we've become.

Photo Essay: Why the highrise is the future for an urbanized planet
June 3, 2015