Thousands of books have been written about Vincent Van Gogh, with more surely to come. But rarely does a title on the tormented Dutch-born painter actually add to or clarify the historical record.

Bernadette Murphy’s Van Gogh’s Ear: The True Story is just such a book. Published this week, it’s already garnered international attention for seeming to decisively demonstrate that, in one of history’s most famous acts of self-mutilation, Van Gogh severed pretty much the entirety of his left ear on Dec. 23, 1888 and not just the lobe, as scholarly consensus had had it for decades. 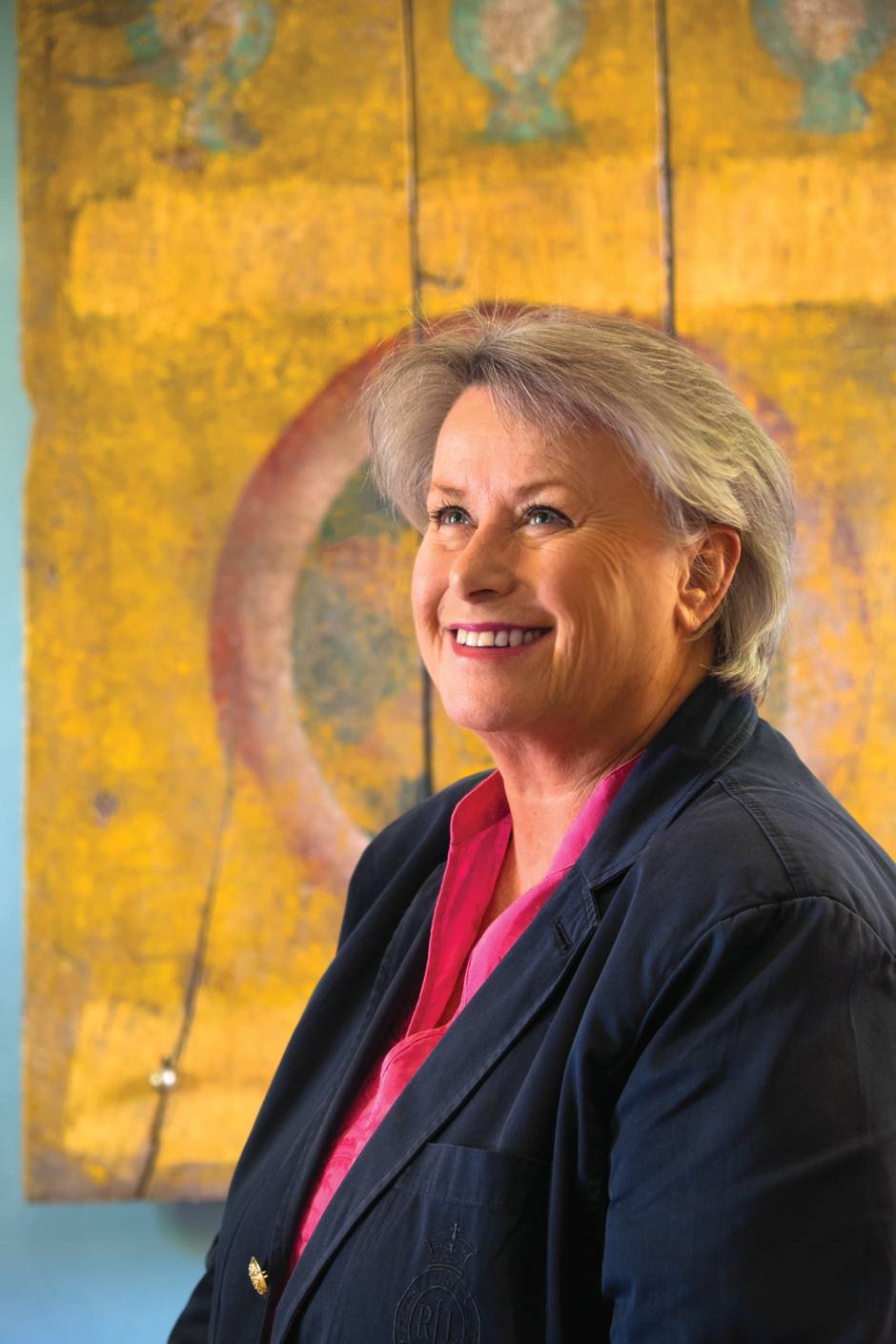 Bernadette Murphy’s research in Van Gogh’s Ear: The True Story demonstrates that Van Gogh severed pretty much the entirety of his left ear on Dec. 23, 1888 and not just the lobe. (Random House)

Murphy’s research also appears to point to the identity, age and occupation of the mysterious young woman whom Van Gogh felt compelled to offer his ear as a grisly gift. Heady stuff, in short, from a first-time, 58-year-old author, self-described as “British of Irish origin,” heretofore unknown in the annals of Van Gogh scholarship.

The Globe and Mail reached Murphy by phone near Amsterdam’s Van Gogh Museum where earlier she’d presented the findings in Van Gogh’s Ear to the press and participated in the launch of an exhibition there titled “On the Verge of Insanity: Van Gogh and His Illness.”

My first question is going to sound a bit blunt: Who are you? The material provided by your publishers has been rather skimpy.

I’ve lived in France for more than 30 years. I came to Provence in 1983 on a holiday visit to my older brother. I returned home [to England] but stayed only a week before returning. I have a degree in art history but didn’t do much with it. My sister died and around that time [circa 2007-2008] I was ill and thinking about doing something different. I was a tenured university-level teacher but I hated teaching. I thought: “How did I end up here? This wasn’t really what I wanted to do with my life. If I don’t do something now, I probably never will.” But these are all personal things and I think from my point of view I’d really like to stick with the book …

It seems in a way you fell into the Van Gogh mystery.

He lived in a town [Arles, in southeastern France] which is only about 50 miles from my small town of 800. So, of course, you know about him. But I wouldn’t have called myself a Van Gogh fan when I started the thing. I thought he’d been a little overused – the images on fridge magnets and tea towels and the like. I kind of slightly dismissed him as a bit of old hat. But I was intrigued by certain discrepancies in the Van Gogh story, which only become clear to a local, to someone who lived there and understood how a whole system functions. Those things made me think: “Well, if that’s wrong, what else is wrong about the story?”

Your book focuses pretty exclusively on the 15 months or so that Van Gogh spent in Arles [from late February 1888 to early May 1889]. Are there other aspects of the Van Gogh story you’re interested in?

You know, I built up a database of all the people who lived in Arles at that time. It has something like 15,000 names. I’d perhaps like to do something on the people behind the paintings. [Van Gogh did close to 200 paintings in Arles, including dozens of portraits of locals.] I think that’s one of the strengths of the current book: They’re just no longer pictures on a canvas or names on a page any more; they’re people with life stories – a very rich tapestry. Maybe I’ll do something for kids, where they can understand how much fun research can be. 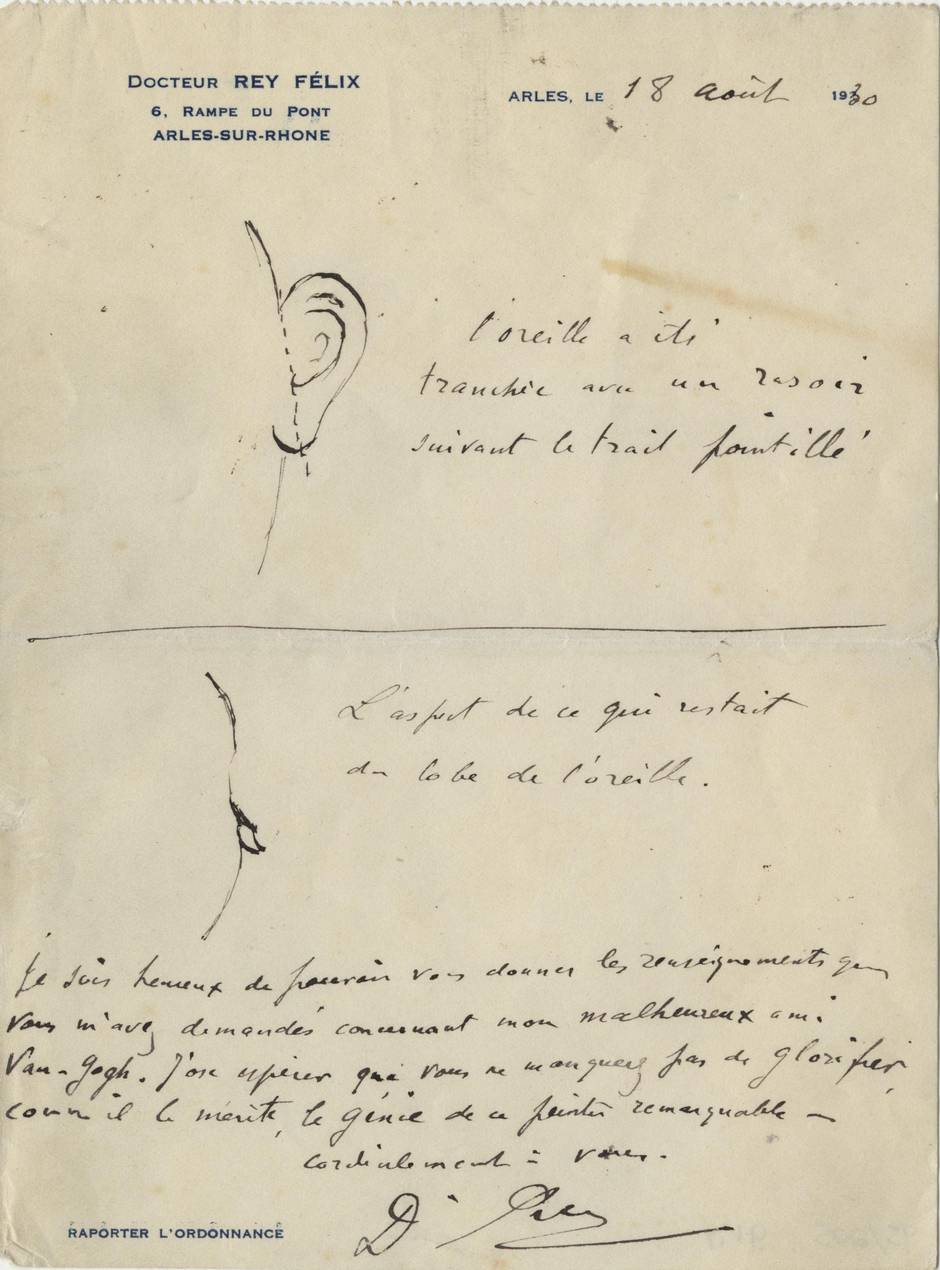 An illustration done by Dr. Félix Rey who tended to van Gogh’s ear wound on Dec. 24, 1888 in Arles. (The Bancroft Library, University of California, Berkeley)

Your research led you to discover the real name and occupation of the woman to whom Van Gogh notoriously gave his severed ear. Yet, her living relatives were upset, fearful her memory would be soiled, and so you agreed not to reveal her surname. Has the family changed its mind at all?

The Rachel part of the story was the most delicate part. [Rachel is what two press reports of the day claim was the name of the woman.] Originally, I was thinking of not putting it in at all. I was afraid, as I know will happen, that if I gave too much away, her identity would become clear straight away. But, I know it will come out sooner or later. Where there’s a mystery, people always want to go looking. Perhaps it will be a good thing that it does come out finally; the demons can be laid to rest.

You’re quite convincing in arguing that absinthe abuse wasn’t the cause of Van Gogh’s mental illness, as some have indicated.

The Van Gogh Museum thinks he was an alcoholic and doesn’t necessarily agree with me on that. I do dismiss it because what I’m about is finding proof. Reading my book, I think you’ll see it’s all about verification and checking. The only place in the book where I suggest or hazard a guess is when dealing with why Vincent took his ear to this particular girl. But with absinthe, I could find no proof; there’s also no proof he was an out-and-out raging alcoholic, like he was portrayed in Lust for Life [the 1934 novelization of Van Gogh’s life by Irving Stone, adapted to film in 1956 starring Kirk Douglas]. I think the case is out for that and I think it’s a subject that might be discussed at this symposium that’s going to be held in September [14 and 15 in Amsterdam] about the diagnoses of Van Gogh.

Are you planning to attend?

I hope I get invited to it. I don’t know if I am going to be participating in it or on the sidelines, but I think it’s likely I’ll be there because I’m bringing something different to the story, about other side details that might prove useful. About a year ago, there was this story about Vincent suffering from gas intoxication in his rooms in Arles. Well, it’s not valid at all and I can prove it. I have loads of little bits and pieces in my archives from the research I’ve done that I think can be useful. 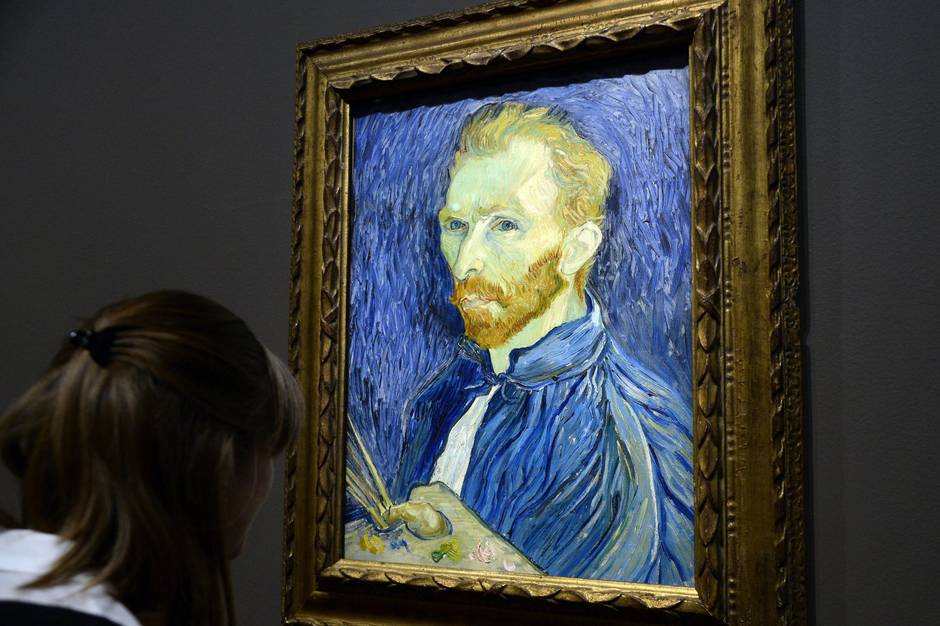 A self-portrait by late Dutch painter Vincent van Gogh is seen on display at the Orsay Museum in Paris in March, 2014. (Bertrand Guay/AFP/Getty Images)

Was the secrecy in advance of the publication the publishers’ strategy?

Yes. You have to go along and believe they know their business. I think it was extraordinarily hard for the editor and the publishing houses to keep quiet about. Everyone had to sign a non-disclosure agreement, the TV people, the printers. I can’t believe we managed to keep it secret until my publication day! I mean, I showed stuff to friends and relatives but they never let it out of the bag. I think I was just really lucky.

Yes, there is a PBS documentary that will be aired in the autumn as part of its Secrets of the Dead series. And BBC Two is doing a shorter one, with Jeremy Paxman, on Aug. 6.

Was it always the intention to dovetail publication of the book with the Van Gogh Museum show?

It was all because of my discovery [in 2010, of the diagram by Van Gogh’s doctor illustrating the exact nature of the artist’s self-mutilation]. The TV program was my first idea. I never even thought of making a book out of it. I contacted a production company because that’s how you make cheeseburgers and the man the very first day said: “You have a lot of information; this should really be a book.” And the museum said the same thing. So everyone worked in tandem – TV people, the museum, the book editors – to make it all come to pass on the same day. I’m a bit dumbstruck. When you work on something for seven years, you’re not allowed to talk about it and all of a sudden it explodes – it’s a very strange sensation.