In her subterranean lab at McMaster University in Hamilton, Audrie Schell opens an old book to reveal a hand-lettered page illustrated with a delicate image of the Annunciation. The Virgin’s robe is a startlingly fresh blue and the touches of gold on the miniature shine brightly, but sections of the pinky-brown background have flaked off, leaving that area patchy.

Schell is a book and paper conservator in the research collection at McMaster’s Mills Memorial Library, and she recently spent eight months restoring this manuscript page by page, putting a stop to just that kind of flaking.

The hand-copied manuscript is a book of hours, a devotional text of biblical excerpts, prayers and psalms in Latin, prefaced by a calendar, often in the vernacular, prescribing their use. In this instance, the saints days in that French-language calendar allow archivists to date the book to 1470-1480 and possibly place it in southern France. It would have been hand-lettered and illustrated by artisans in a workshop during the period when printed books were first appearing but most were still produced manually by copyists. 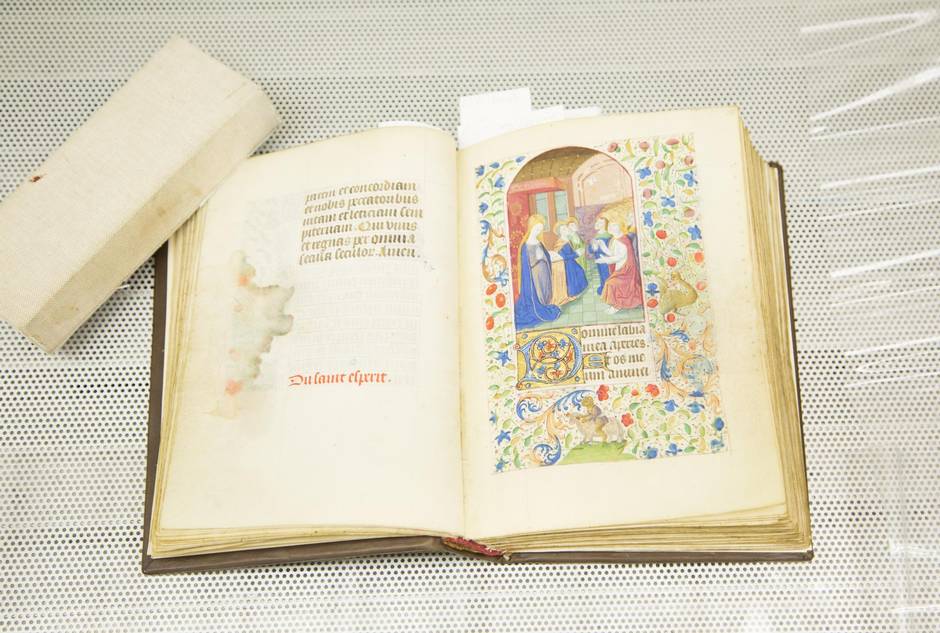 McMaster University book conservator, Audrie Schell to painstakingly rehydrated each set of four vellum pages separately during its refurbishing at McMaster University. (Photos by Peter Power for The Globe and Mail)

McMaster acquired the book from a London dealer in 1967. Copied on the animal-skin vellum that was used for finer books before paper became ubiquitous, it was in bad shape and had been exposed to moisture at some point: Its pages were warped and wrinkled, and some showed actual “tide lines” where water had marked them. In turn, those misshapen pages had rubbed against each other, causing the pigment on some illustrations to flake. The spine was cracked and the book had been insensitively rebound in a velvet cover in 1905.

And so it became Schell’s professional ambition to fix it: She has held her job since 1998, but it’s only in the past year that she has been able to find the months required to work on the McMaster book of hours – unbinding the pages of the book and flattening them one by one.

“Skin takes on moisture; it becomes cockled, wavy,” Schell explains. “It swells and the spine cracks. It grows until it can’t fit in the binding any more. … The book moves; pigment will crack and it will flake, so you get loss.” In short, the book once so painstakingly drawn onto pages made from the skin of a calf, lamb or kid was becoming too fragile to use. 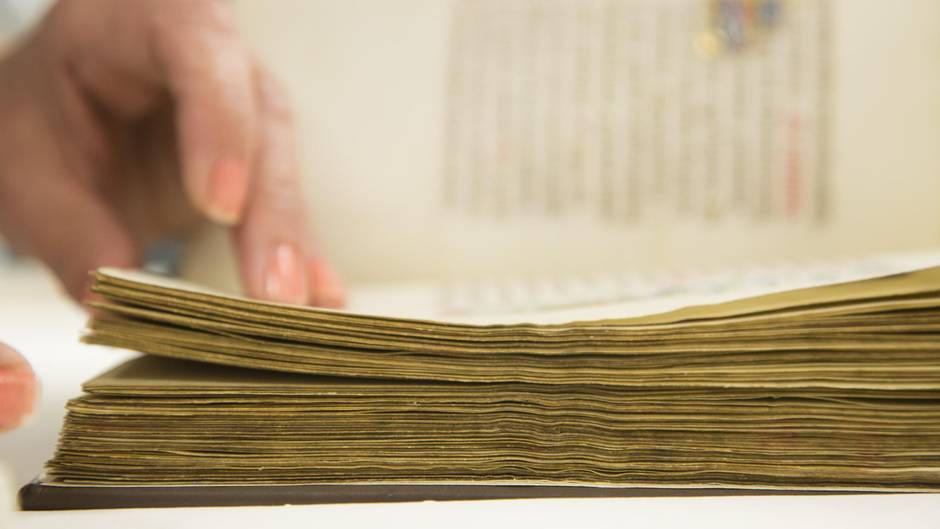 Schell looks through the vellum pages of a 1470 medieval illustrated Book of Hours.

A large part of the project involved humidifying each page so it could be flattened. Unbound, each bifolium – or double-page spread – was unfolded and placed on a metal screen on the surface of a suction table in the library’s book preservation lab. A dome was lowered over the page and it was exposed to an ultrasonic mist of distilled water. The amount of misting had to be carefully calculated – too much moisture and the vellum would become irreversibly transparent. Once moist, suction was turned on underneath the page so it was sucked flat; it was then removed and left to finish drying on felt.

Before Schell began this laborious process, every page was photographed and details of its original creation and current condition were noted. Also, she sent for Brandi Lee MacDonald, who specializes in the chemical analysis of art and has just completed a PhD about rock art. MacDonald tested the illustrations and found no trace of elements such as titanium or aluminum, which are used in modern pigments.

“I was very happy,” Schell said. “The findings were that there had never been any touch-ups. The pigments are from 1470; nobody has adulterated them. In 500 years, nobody has had a hand in there.”

The chemical analysis, performed using X-ray fluorescence to activate particles in the pigments, also gave Schell information about how she should treat them. For example, the blue is ultramarine made of ground lapis lazuli: If exposed to a gelatin-based consolidant, it might darken. So, instead, Schell used a celluose-based product to stabilize flaking pigment. 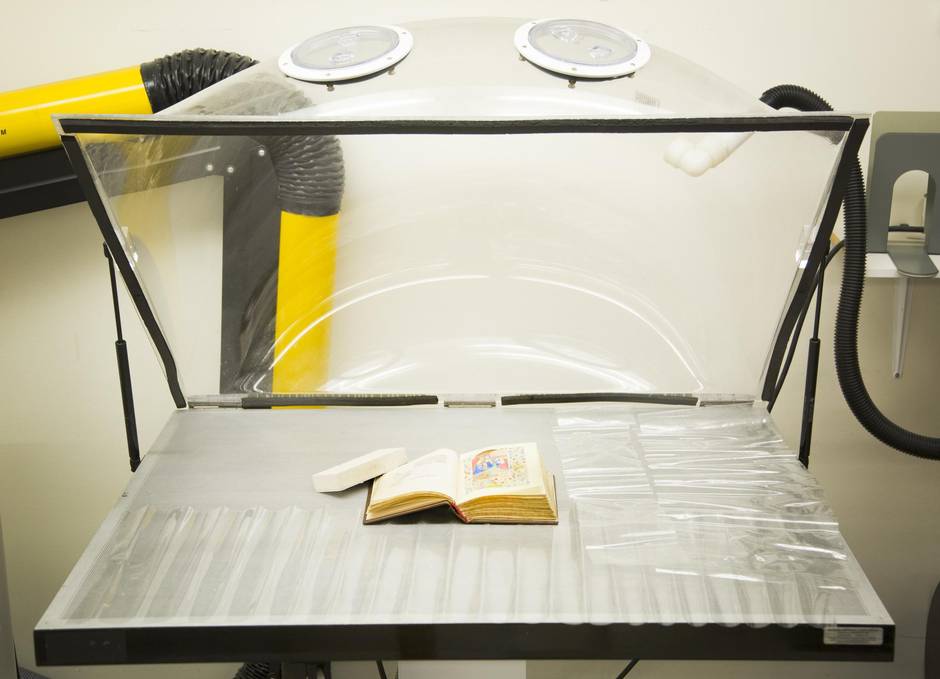 The medieval illustrated Book of Hours sits atop an open humidifier that was used by Schell.

Once the pages were flattened and damage to the illuminations halted, Schell rebound the book, sewing it back together herself. The manuscript dates to a period in book binding when the text block was stitched together over top of the spine, creating those raised cords on the back of a book that are still associated with a quality binding on an old book. However, the 1905 restorer had cut into the pages to recess the stitching – a more recent and faster method of binding that creates a flat spine. Schell did not want to further puncture the pages, so she stuck with that later technique but added the appearance of raised cords to the spine when she rebound the book. There, she chose a plain leather cover of the kind that would have been used in the 15th century, before the development of ornate gold tooling. The green velvet cover of 1905 and the metal clasp that closes it are an anachronistic fancy: “They just wanted to make it look beautiful, but it’s not really historically correct,” she said.

Once the new cover is closed, the final product looks deceptively plain and straightforward – but the pages inside are still filled with mysteries. The illumination is unfinished in places, with decorative elements that are blank or have only a first colour laid down. There are other clues that suggest the manuscript, probably intended for a lay noblewoman, was never passed on to a buyer at the time it was created: There are traces at the edge of some pages of instructions to the scribe or the illustrator that would have been cut off when the book was finished – as would have the pinpricks used as a guide to rule lines on the pages. 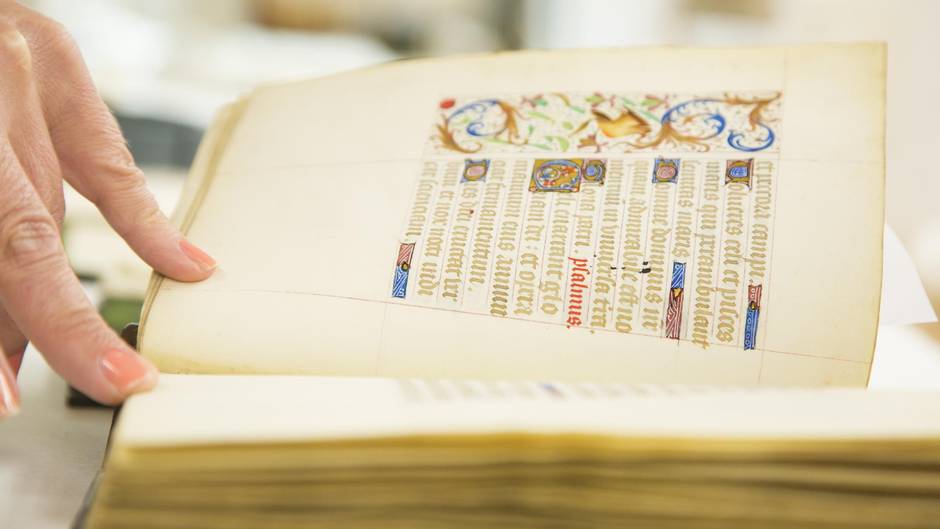 The book of hours sits quietly on a shelf waiting for a serious researcher to plumb its depths.

Schell points out that a study of the book of hours might reveal a lot about the work flow in a scriptorium; there is also a point in the manuscript where a smaller hand takes over as one scribe replaced another at the arduous task of copying out the text.

Images of each page have now been entered into the library’s digital archive, but when it comes to touching the real thing, Schell is possessive.

“I’d love a scholar to come and study it, a serious researcher; otherwise keep it in in the stacks. I don’t want anyone to ever look at it again!”

So, for now, the McMaster book of hours sits quietly on a shelf waiting for that serious researcher to plumb its depths. It’s not in any hurry; after all, it’s been waiting for the right reader for 545 years.