Our faces and our hands are the most consistently exposed parts of our body. They're what we present to society, wear to work, offer to the elements. So it's hardly surprising that over the millennia humankind has attributed all sorts of expressive qualities to what nature and nurture, time and happenstance has writ upon the face and hand. "She has a warm smile." "His is a cruel mouth." "The eyes are the window to the soul." "Those are the thumbs of a fisherman." "Your palm has a very short lifeline." "I can read him like a book." "She's the spitting image of her mother and no good's gonna come of that."

Faces and hands abound in The Light Inside, an arresting survey of (mostly) pictures by the Boston-born photo-documentarian and photographer-as-physiognomist Wendy Snyder MacNeil. It runs through April 10 at Toronto's Ryerson Image Centre.

RIC has been home to the MacNeil archives since 2007, thanks largely to the intercession of her brother and some time collaborator, Don Snyder, who's also a professor in Ryerson's School of Image Arts. It's Snyder who curated The Light Inside.

"Under-recognized" is perhaps the best descriptor of the MacNeil oeuvre. Certainly among the photographic cognoscenti she's known and acclaimed as an artist and teacher, having studied under the great Minor White in the late 1960s at MIT, and been feted in exhibitions, books and periodicals, particularly in the 1970s and 1980s. As an educator, most notably at Wellesley College (1973-85) and the Rhode Island School of Design (1976-2007), her students numbered such significant talents as George Lange, Natalia Almada, Sally Gall and Francesca Woodman. MacNeil's own work is in the Museum of Modern Art and the Metropolitan Museum, among other institutions.

MacNeil is still alive – she's 73 this year – but there's a kind of valediction quality to The Light Inside, a sense of closure, evanescence. Partly this is due to her decision in the late 1980s to forego still photography to move into video installation, multiscreen projection and film, six examples of which are featured in the RIC show. Partly, too, it's because MacNeil came of age when serious photography meant black-and-white, not colour.

Today, of course, colour is king. As a result, The Light Inside has a fustiness to it even as one acknowledges MacNeil's painstaking mastery (technical and aesthetic) of gelatin silver printing and the lustrous platinum-palladium technique on wispy tracing vellum.

The exhibition is presented more or less chronologically, beginning with MacNeil's forays into what might be called environmental portraiture – a four-year documentation of Boston's open-air Haymarket district and the people who worked there, published as a book in 1970; pictures of itinerant tinkers in Ireland's County Galway countryside, shot in the late 1960s; an unpublished photo essay on children with special needs, shot at a Massachusetts school in 1975. Mrs. Zamoyska, a 1973 photo of a woman sitting in front of a large window, dachshunds at her feet, while another woman (or perhaps the same one) sits outside staring into the window, calls to mind Jerry Uelsmann's experiments in photomontage. Later, MacNeil started to photograph what was more immediately at hand – her husband, her daughter, other relatives, colleagues, friends – often in pared-down circumstances or in assemblages supplemented by found and collected images (I.D. cards, class pictures, snapshots, visas, graduation photos).

At one point, MacNeil declares: "All essential relationships are concentrated in [the shape of the face, the shape of the hand]. They're metaphors, physically and spiritually intense."

What distinguishes virtually all the photos in The Light Inside is their humanism. Some of the later series – 11 pictures of upraised, unclenched palms, portraits of tenured art professors at Wellesley College and graduate students at RISD – evokes the likes of Richard Avedon and Diane Arbus in their austerity of setting, straightforwardness of presentation, simplicity of framing and psychological complexity. But unlike Avedon and Arbus, there's no sense of struggle between the photographer's intention and the subject's expectation, of the photograph as a sort of trophy won in a theatre of cruelty. Rather, there's a reciprocity or balance between "the acts of seeing and being seen." Certainly, MacNeil's prints draw attention to themselves (this is especially true of the platinum-palladium work), to the artist's superior technical skills. But, as the video producer and essayist Steve Marx observes in the show's catalogue, "she has made her role as photographer nearly transparent."

The Light Inside can be seen Tuesday through Sunday at the Ryerson Image Centre at Toronto's Ryerson University, through April 10 (ryerson.ca/ric). 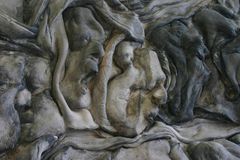 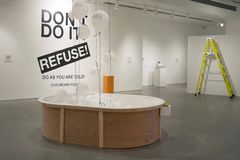