They have been praised by the likes of The New York Times (“outstanding”) and Artforum, and have been acquired by institutions such as the Guggenheim, the Whitney, the National Gallery of Canada and the Art Gallery of Ontario. They were the subject of a 2007 show at Musée d’art contemporain de Montréal, his first solo exhibition at a public gallery. And they are finally coming home.

An exhibit, called Karel Funk, opens at the Winnipeg Art Gallery this weekend – the first major survey of his work. It includes 24 paintings, representing about a third of the body of work under examination. 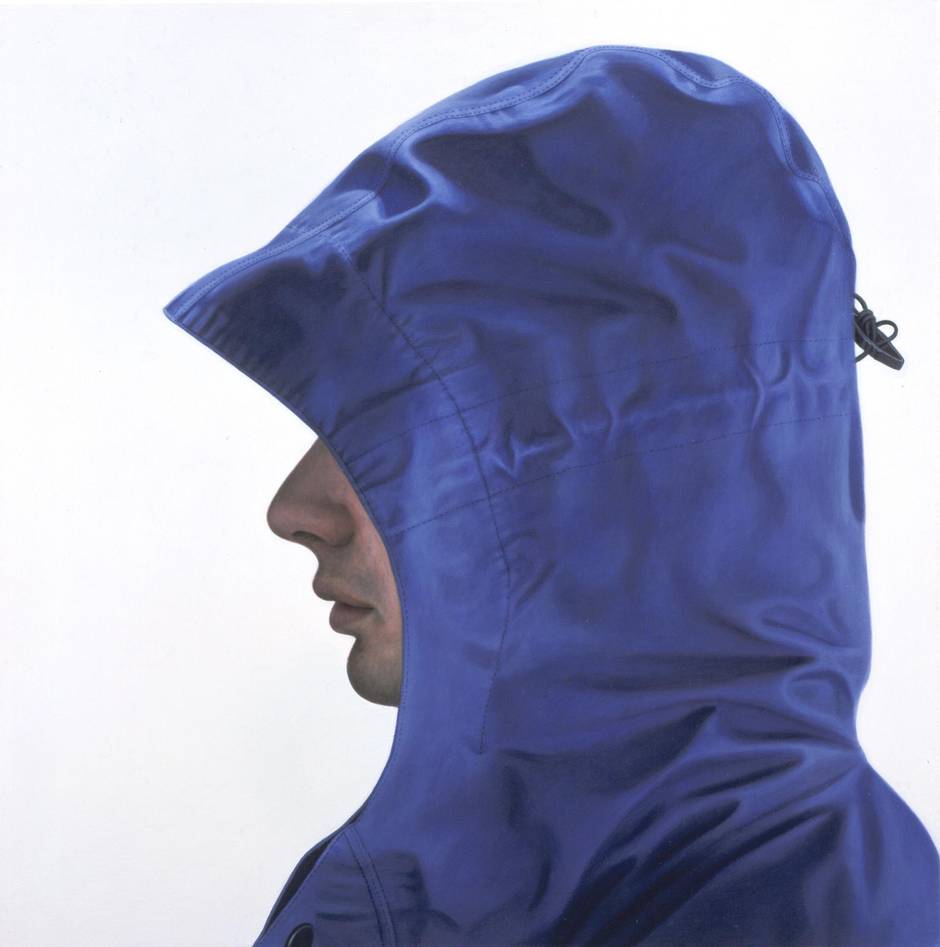 The works are hyperrealist – acrylic paintings on wood panels that portray people wearing hooded jackets. As his practice has evolved, their faces have become more obscured. Sometimes we see only the jacket – but we know there’s someone wearing it.

“They are powerful and penetrating works even though you’re rarely seeing the face of the sitters,” says Stephen Borys, the WAG’s director and chief executive officer.

Funk, 44, calls the jackets a muse that allows him to explore his painterly ideas. 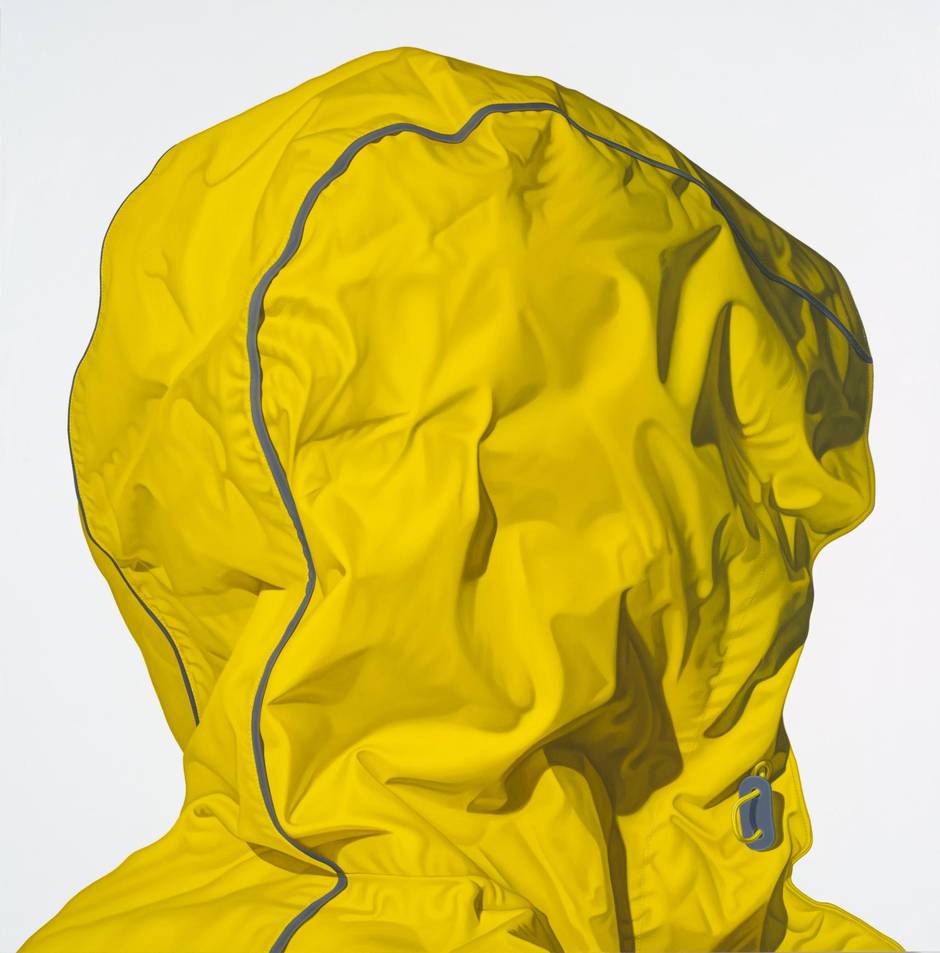 “These modern Gore-Tex kind of synthetic hoods … reference contemporary life,” he says in an interview from his Winnipeg home and studio. “But the hood I thought would also reference Renaissance portraiture. So slowly I developed this idea that it could be a bridge between contemporary life and art history.”

Funk, who has a basement full of jackets, brings in models and takes hundreds of photographs (he used to use slides; digital photography has made the process much more efficient).

“I’ll pose them in different poses, move the light around. I like to crinkle up the jacket. It’s hard – the jackets don’t always stay crinkled. Sometimes I’ll use tape or tissue paper under the jacket to kind of sculpt the jacket a certain way.”

He looks for combinations of jacket and light that work, inputs the photos into his computer and manipulates them using Photoshop – adjusting light and colour, twisting and warping, sometimes cutting and pasting. He projects the master source onto the panel (he used to paint on canvas but didn’t like the bounce) and does a quick sort of sketch outline and scribbles in some shadow areas. Then he paints – often hundreds of very thin layers of acrylic that are almost transparent, so it takes a long time to build up the image. Each work takes months to complete. 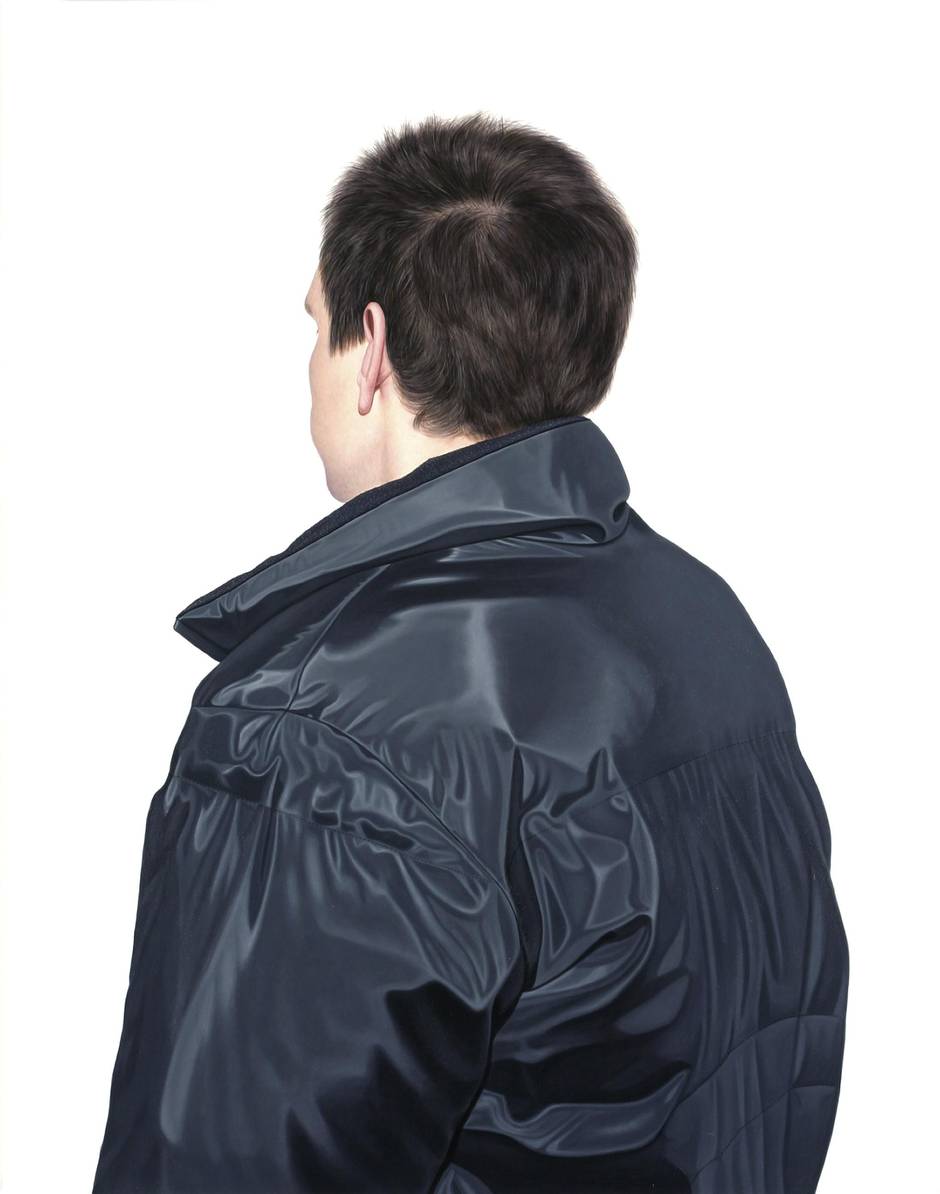 They were not dreamed up in cold, blustery Winnipeg, where Funk was born and lives and where one requires protection from the cold and snow. They were inspired rather by his time in New York, where he moved in late August, 2001, to do his master of fine arts at Columbia University.

There were two threads of inspiration: observations of his fellow travellers (often literally, in the subway) allowed by the shoulder-to-shoulder proximity of New York life; and exposure to historical paintings at the city’s great museums, especially the Metropolitan Museum of Art, which he tried to visit weekly.

On the subway, personal space disappeared and he was able to examine strangers in an intense, intimate way.

“You could look over and see the earring somebody’s wearing or that space behind somebody’s earlobe,” he says. “I use the term urban voyeur. It sounds kind of creepy, but you could look at these people, these strangers, when they’re very close to you and just examine their textures and surfaces in ways that you would never do when you’re socializing with friends.” 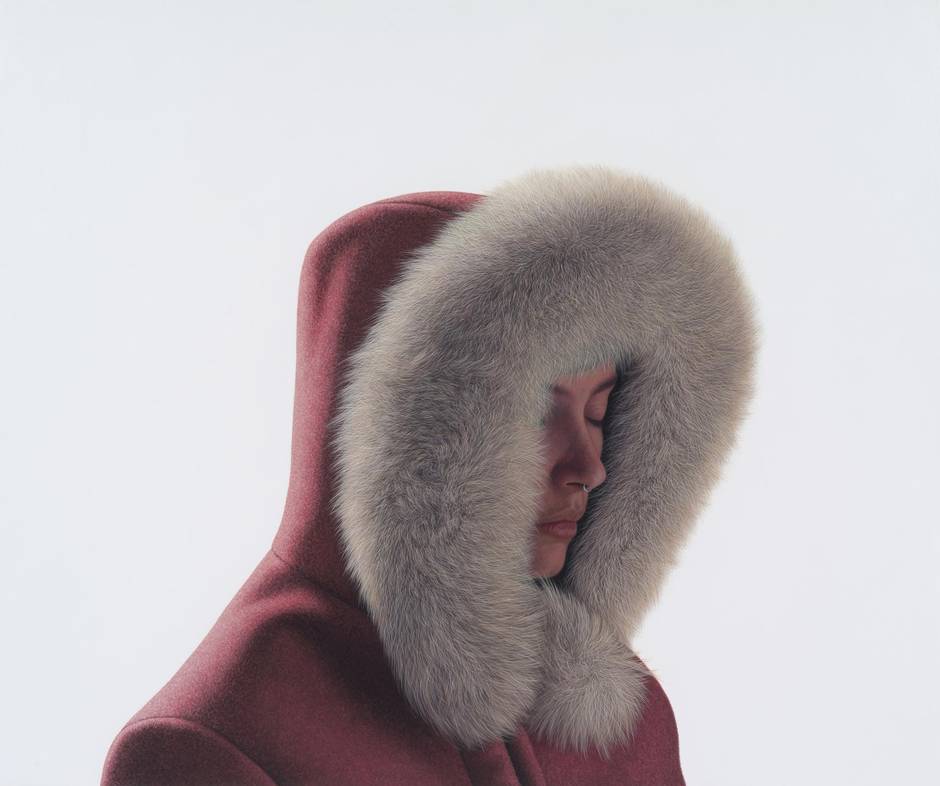 Because Funk arrived in New York two weeks before 9/11, I had to ask whether the works – humans shielded against the elements, but what else? – were at all influenced by the attack. While the event had an impact on his life – in fact, he later realized that the roaring sound that woke him up that morning probably came from one of the planes passing over his building – it does not factor into this body of work.

What does factor in are the historical paintings he viewed during those trips to the Met and the Frick.

Funk’s hoodie-clad figures couldn’t look more urban and contemporary, but, as you study them, you realize the extent to which they draw on historical, especially devotional, art – hooded religious figures such as monks. They reference Dutch and Flemish work, the Italian baroque and the Spanish baroque – especially the monastic paintings of 17th-century Spanish painter Francisco de Zurbaran, as Mr. Borys, the WAG director, explores in a fascinating catalogue essay, noting that Funk visited the 2003 Met show Manet/Velazquez: The French Taste for Spanish Painting.

“That show definitely had an influence on my work, with the reference to hoods,” Funk says. “The quality of lighting of Zurbaran’s paintings influenced the way I like to light my subjects for my paintings. … But it wasn’t a concrete, conceptual influence; I think it was among the things that have pushed me in the direction I’m going now.” 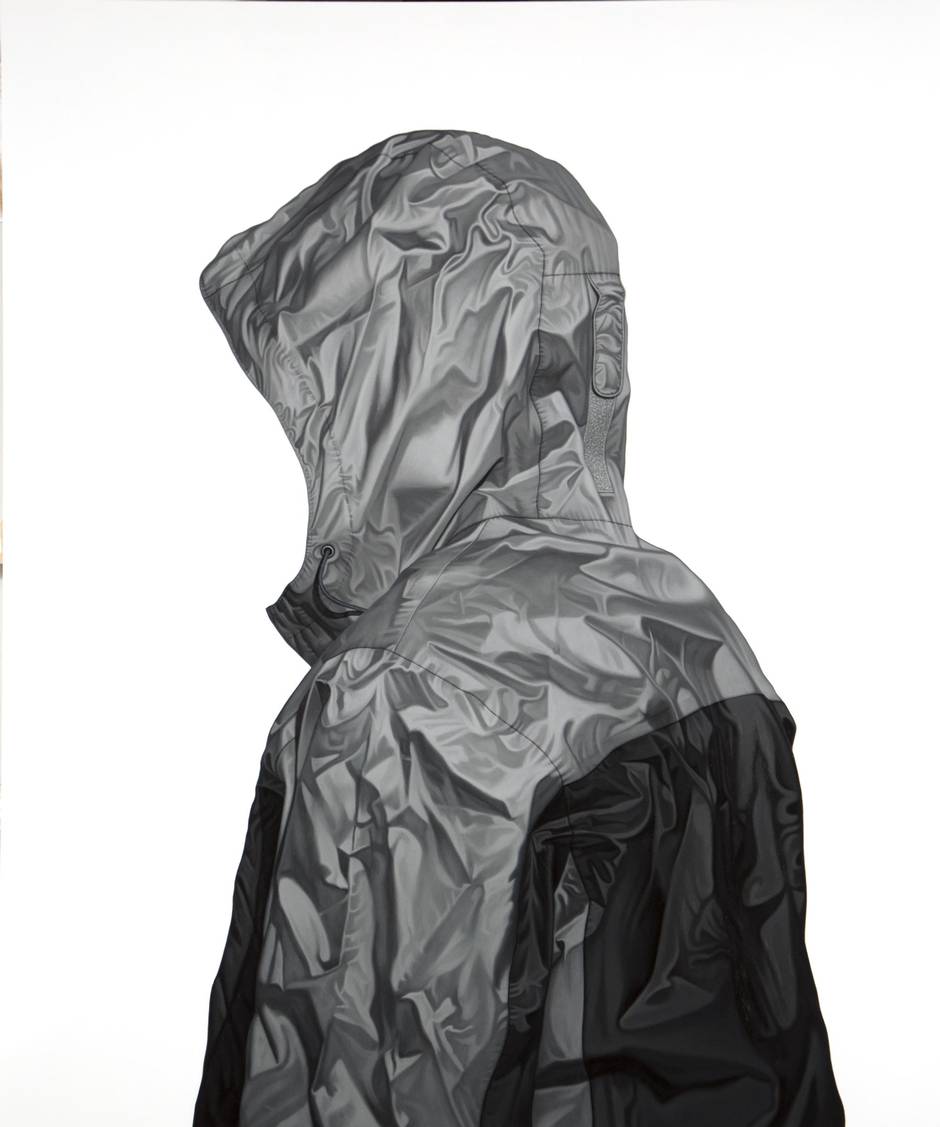 Gradually, Funk’s faces have become obscured by the jackets, turned away from the viewer.

“You can tell it’s a person, you can make this association,” the show’s curator, Andrew Kear, says. “But there’s not a lot of access points to the person. This is what I call … a portraiture of concealment. But he’s engaged in this historic genre which is all about portraying somebody, showing somebody, and trying to give off certain ideas of that somebody. And yet he’s concealing them.”

While Funk has distilled the flesh and hair out of his hooded portraits, in the past few years he has also painted works where the subject’s flesh and hair are visible – but they’re not wearing a hood.

In his most recent painting in the show – which he was still working on last week – both hood and face will be visible.

Borys first saw one of Funk’s paintings in person when visiting a Winnipeg collector. 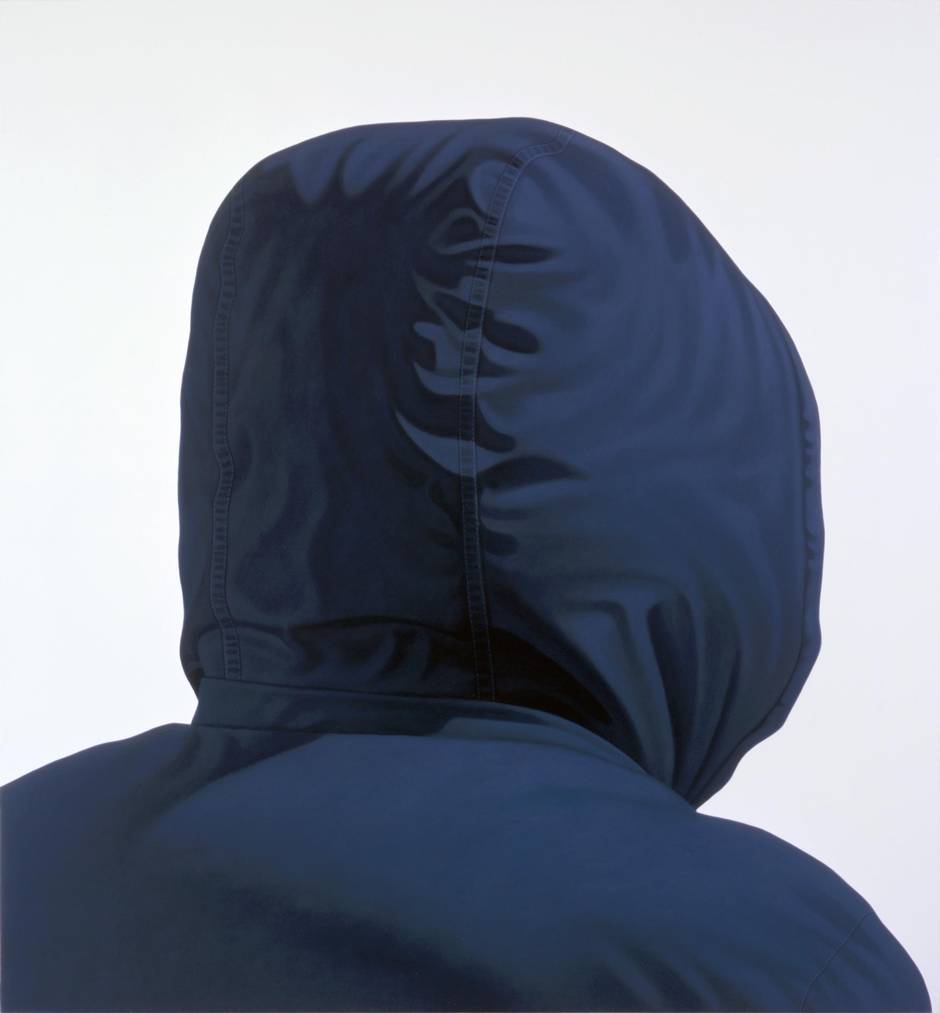 “All of a sudden, I come into one of the rooms and there’s this painting on the wall and you’re just drawn to it. There’s this blue hood. I had come across Karel’s works in reproductions, but never in the flesh,” he says. “This work was not that large, but you know it commanded the wall; it had a real presence.”

That painting, Untitled #41 (2010), is one of the works in the exhibition, which opens Saturday.

“It’s going to be the show that connects people with centuries of artmaking and to a particular genre, the portrait, that has never left us,” Borys says. “Those pictures are quiet, they’re still, they’re kind of inward. And yet they allow us to look at generations of portraiture.”