We can be fairly certain that most people who passed by the Ydessa Hendeles Art Foundation during its 25 years on Toronto's King Street West had no idea what went on there. There were no posters, no window displays, nor even a sign stating unambiguously that art could be seen inside, if only from noon to 5 p.m. on Saturdays.

Yet the relatively small number of shows presented there – most ran for at least a year – subtly changed the art world, and the way we think about presenting art and other objects in a contemplative space. Behind her building's uncommunicative façade, Hendeles was busy removing conceptual walls between art and non-art, current art and cultural history, spectator and participant.

Hendeles began her public career as a dealer in Canadian art, till the day she decided that what the scene needed was more buyers. She began a restless career of acquisition, of contemporary artworks and of more ordinary objects that seemed to do what art does – to make us think, feel and experience more deeply.

The possible dialogue between these different types of objects gradually became her focus. She moved away from single-artist presentations towards multi-artist shows that invited us to ponder unexpected conjunctions of sculpture, vintage toys, snapshots and art photography. At a time when art curation can seem relentlessly explanatory, Hendeles posted laconic wall labels and published no catalogues. She configured a space – different for each show – filled it with carefully selected things, and let us figure out what it could mean.

"The shows were interpretative," she told me last week, "but there was never a theme that the works were shoe-horned into, or made to serve."

It was possible, however, to see paired themes at work across her shows: innocence and experience; violence and safety; memory and forgetting. Her exhibitions were personal symbolic narratives, but they didn't insist on any one reading.

Her last show in the space opened three years ago, and ran till June of this year. The lack of a successor didn't indicate a shortage of ideas, but Hendeles's realization that she didn't need to be custodian of a building to continue her increasingly potent trajectory as a curator-artist. Over the past two years, she has done site-specific shows at galleries and museums in New York, Berlin, and Marburg, Germany.

Three exhibitions from her King Street days stand out with particular force, for me and for many others. These are the shows people tend to mention when talk turns to Ydessa, as she is known by everyone in the art scene. If you missed them, there's no catalogue to help you get the gist. You just had to be there, and I'm glad I was.

The show that opened the YHAF space featured a half-dozen installation works by French artist Christian Boltanski, who like Hendeles, was born in Europe of Jewish parentage at the end of a war that might have made his existence impossible. Boltanski's use of found objects, and his obsession with memory and loss, meshed with Hendeles's personal focus and future practice. His site-specific piece Canada was a knockout: a small room of four steep walls hung from top to bottom with old clothes, like the ones taken from Jewish victims of the Holocaust and stored in concentration camp depots known among the inmates as Kanada.

Hendeles amassed a huge collection of vintage photos of people with their teddy bears, then built a two-level library-like space in which to display them. The cozy yet authoritative ambience of this display, and the likelihood that the subjects of the photos were dead, ran up against the eerie vulnerability of a kneeling, boy-sized Hitler in the next room, sculpted by Italian artist Maurizio Cattelan. Partners showed the same installations in a different configuration, along with works by Diane Arbus, Jeff Wall and others, at Munich's Haus der Kunst – Hitler's own temple of art.

This show included works by the likes of Louise Bougeois, Marcel Dzama and Bill Brandt, but the arresting core of the exhibition was a collection of vintage Punch and Judy glove puppets, and a set of 1928 George Cruikshank etchings of the centuries-old Punch plays. The violent traditional puppet drama served as a matrix for a brilliant multi-artist meditation on beauty, entertainment and depersonalized cruelty, with a child's perspective almost always in view. Reprised in a different configuration a year later, as Strait-Jacket. "That's the way to do it!" as Punch would say.

End of an era: Ydessa Hendeles has closed her Toronto gallery doors
October 30, 2012 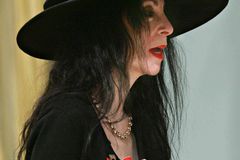 Get cultured for nothing and your art for free
November 18, 2011 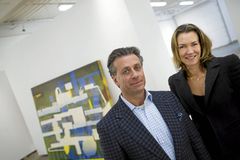 Hendeles AGO gift tops $5-million, but it's just the beginning
January 22, 2010
Follow Robert Everett-Green on Twitter @RobertEG_
Report an error Editorial code of conduct
Due to technical reasons, we have temporarily removed commenting from our articles. We hope to have this fixed soon. Thank you for your patience. If you are looking to give feedback on our new site, please send it along to feedback@globeandmail.com. If you want to write a letter to the editor, please forward to letters@globeandmail.com.
Comments