Douglas Coupland has been collecting the stuff for years: toy guns, adding machines, little astronaut figures, tiny cribs and toilets, a giant molar, a punching bag. They came from Craigslist, dumpsters, garage sales, eBay. Now gathered in an enormous installation – white items on white shelves; colourful trinkets on black shelves; a precarious Tower of Babel constructed with children's blocks; odes to Japan, Germany, Coupland's childhood piano teacher and what he calls "hillbilly culture" – they have become a depiction of Coupland's brain: a fascinating, cluttered mess that is both tempered and augmented by distraction.

Created from among thousands of objects Coupland has collected over the years, The Brain is the final work in the Vancouver Art Gallery's new exhibition, entitled Douglas Coupland: everywhere is anywhere is anything is everything, which opens Saturday.

"[The show] really is, in kind of like a John Malkovich way, being inside my own head," Coupland told The Globe and Mail, as he sat perched next to an installation of three enormous Tide, Downy and Pennzoil bottles.

His is the brain that has wrought not only 14 novels, for which he is best known, but also a visual art practice that VAG officials felt called for a major survey exhibition. When they phoned him up last year to propose the idea, Coupland thought he was being punked, he says. But with this solo museum show – his first – Coupland and that brain of his have dreamed up what is sure to be a summer blockbuster.

There will be people who dismiss the exhibit as a slick, helter-skelter jumble of pop-culture. But touring through it, the curator and artist present analysis that suggests it goes deeper than clever phrases and colourful whimsy. There are more than 100 works, influenced by artists such as Roy Lichtenstein, Andy Warhol and Tom Thomson, by historic events including the October Crisis and 9/11, and by Coupland's own life.

"Even though a lot of the works are quite autobiographical and maybe begin in a personal place," says curator Daina Augaitis, "it seems to me that they really point us in the direction back to ourselves and our place in this big, unruly, chaotic world, and how we make sense of it."

The exhibition – which takes its name from an unpublished Coupland essay that reflects on technology's impact on our experience of life – is divided into six sections: Secret Handshake, Growing Up Utopian, Words into Objects, The Pop Explosion, The 21st Century Condition and The Brain.

Serving as an overture of sorts, the show begins with The Brick Wall – 25 long, narrow shelves installed with hundreds of building-set parts, meticulously arranged (by a friend of Coupland's, he says, who has obsessive-compulsive disorder). An ordered antidote to the mess we have made of the world, it is filled with promise and possibility; these are the building blocks out of which one can create anything.

The first section, Secret Handshake, comprises work Canadians will understand implicitly, but which Coupland imagines will be a puzzle to Americans. A plywood-panelled gallery, evoking an unfinished basement rumpus room, features several installations. A padlocked freezer promises ice, but has blood oozing out from underneath – and a made-in-the-USA sticker slapped onto it. His 905 Hutch is topped with what he laughingly calls "Rob Ford's sceptre": a toppled CN Tower, black and scorched at the bottom where it has been ripped from its base.

"It's … an ode to the stalemate nature of new politics, where democracy doesn't seem quite adequate to deal with the present situation," says Coupland. "You have Rob Ford, who, if he ran, would probably win again."

In the Growing Up Utopian section, two Lego installations offer different takes on urban planning. The first, 345 Modern House, is inspired by the only Lego kit Coupland bought as a child; 100 Lego houses, exactly the same, speak to the mind-numbing postage-stamp homogeneity of the postwar era. In the same gallery, a more contemporary version of utopia stands in stark juxtaposition, filling up the same-sized space with colour, density and diversity; Towers – 50 large-scale Lego structures – was built with input from the public, and Coupland's friends.

While even the colourful elements of the show have a kind of darkness to them in the questions they pose, the section called The 21st Century Condition offers a truly bleak contemplation of both recent history and the near future. Visitors confront an installation representing the World Trade Center towers. On the walls surrounding it are simple dot formations that appear to be abstract compositions – but which, when viewed through a smartphone lens, are revealed to be Osama bin Laden (Jumbo Boogeyman in the Sky with Diamonds); or, chillingly, bodies falling from the Twin Towers (The Lovers, The Poet).

The large and detailed installation The World depicts a society devoid of privacy. The U.S. National Security Agency headquarters is at its centre, while surveillance devices installed throughout flash and move, appearing to track the viewer's movements. The work also paints a dark ecological picture: pipelines, globes covered in black oil, nuclear missiles ready to launch, (real) dead honeybees.

"Last year on Air Canada, I flew 128,000 miles, so I'm like the world's biggest carbon criminal," says Coupland. "I'm complicit in all this. I'm not saying I am above it. How do we work through this?"

Finally, The Brain tells, in many ways, the story of Coupland's life. Under a red table, the cluster of hillbilly paraphernalia speaks to his family's agricultural roots and the fact that growing up in West Vancouver they occupied "the only not-modern house in the neighbourhood." On top of the table sits a white tree stump, extracted from the patio of painter Gordon Smith – who lives in a magnificent modernist Arthur Erickson house. A metre or so away, two mannequin torsos clad in white undies (one male, one female) remind us that before there was online porn, there were department-store catalogues. Behind them are empty science racks – the parts of our brain we do not use.

There's also a maquette for Gumhead – an outdoor installation commissioned for this exhibition. The work, Coupland explains, stems from his interest in what motivates people to deface public art. He is investigating through invitation, asking people to stick a piece of chewing gum somewhere on this giant depiction of his head. "It'll involve gum," Coupland decided in coming up with the idea. "It's got to involve some degree of public humiliation, ego – not taking myself too seriously." 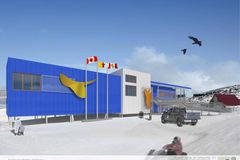 Britain’s Turner Prize in sights of first Canadian-born finalist
May 20, 2014 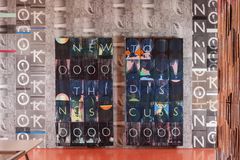 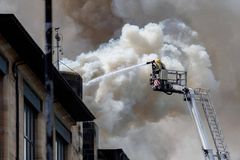