The Jeffrey Rubinoff Sculpture Park is a trip – and I don't mean the three ferries it takes to get here from Vancouver. This is a cultivated space on Hornby Island in the Salish Sea – once wild, then a farm, now a sort of outdoor museum, where the mountainscape forms a living room, as the sculptor envisioned it – with the mountains over the water to the west and adjacent to the east (Mount Geoffrey, coincidentally) forming natural walls.

"It's wild but it's made; remade into a room," park curator Karun Koernig says. "You're inside a created space."

And yet you are most definitely outside. On the day I visited, heavy clouds created a roof (and pelting rain a challenge). Gumboots were offered as we navigated prolific deer poop and plots of deep, thick mud. The reward – an outdoor art experience with more than 100 sculptures and one fascinating backstory: a Canadian who was emerging as a major North American sculptor in the 1980s but left it behind for a quiet, prolific life on a remote Gulf Island, far away from the art market. Also, an important part of his story involves a shopping mall, of all things.

Confession: I have lived in British Columbia for nearly a decade. I write about art. And yet I knew nothing about Rubinoff or his sculpture park until a book about him landed on my desk in the fall.

Rubinoff was born in 1945 in London, Ont., the son of a successful businessman who later built nearly 70 Holiday Inns around the world, according to The Art of Jeffrey Rubinoff edited by James Fox, an art historian at the University of Cambridge. In 1973, Rubinoff bought a 200-acre farm on Hornby – looking for a large property that would allow him to make and store his work, and better weather than what he was used to in Toronto (he actually tested the weather out by flying back twice during what he understood to be the two most rotten times of the year – March and November).

He was fully interested in the commercial-art market early in his career, with shows in Toronto, New York – where he even opened a gallery – and elsewhere.

But the project that could have defined his career – and certainly went on to fund it – was a shopping mall. Rubinoff's father had his son design and project-manage the White Oaks Mall, which opened in London in 1973. The design transcends typical shopping-mall glitz and utilitarianism and included three of Rubinoff's own monumental steel sculptures, which he installed at the entrance.

The mall project – design and management – was a success. But Rubinoff's future was not in retail.

"I thought, 'I can't continue this; this is soul-destroying,'" Rubinoff says during a lengthy interview at his low-slung, windows-and-wood home at the centre of the Hornby property. "That's when I knew I was on the wrong path. I had to get back to work."

He installed himself on Hornby permanently and devoted himself to his artistic practice, initially with no intention of installing his work to create a sculpture park.

But his practice evolved as he continued to work on Hornby and see the impact of the artistic intervention in the natural setting and vice versa. He withdrew further and further from the art market. Eventually the works were installed deliberately to interact with the environment, picking up on or echoing the landscape – branches on trees, the curves of hills and mountain peaks, even the lines on the property's barn, which is now Rubinoff's studio. The curves of the different works also speak to each other.

The work is now installed around the park, with its giant cedars, ponds and streams (shaped by landscaper John Kirk) grouped for the most part by series, which is how Rubinoff works. While the early works installed at the park came from his early artistic life – made with the white cube of the gallery space in mind – once on Hornby, Rubinoff began creating works in series, each exploring a theme, idea or aesthetic. Within the series, each work is a progression (they're numbered) showing some evolution from the previous work – with an added step, component or aesthetic idea. He works by asking himself how he can make the work more interesting, complicated. Once he has satisfied the idea, he has completed the series and moves onto the next.

Rubinoff was hugely influenced by the U.S. sculptor David Smith, whose work Rubinoff first saw in the late 1960s – a small steel work at the Whitney Museum in New York, he recalls. Smith, who died in 1965, created abstract geometric works, which he did the welding for himself – often using steel.

Rubinoff does his own casting, in his barn studio. He works completely alone, only allowing someone in once a work is completed. At times, when he needs assistance or someone around for safety purposes while he casts, he will ask the person (generally his partner) not to look at the work if that's possible.

In Series 1, it is not difficult to see the influence of Smith's work, in particular Smith's Cubi series. Rubinoff is very interested in art history and drawing from it (he despises the word "derivative" as it has come to be used – pejoratively). Rubinoff's Series 1 is playful, with suspended cubes of welded stainless steel suspended – a metaphor for stone, he says; there's that interest in art history again. I see children's building blocks in them; a man playing with his work, delighted.

Series 2 is less blocky; the stainless steel figures look almost mechanical, using elements that resemble cogs, pistons and joints, which articulate. The movement is pulling rather than falling or being suspended, as in Series 1.

For Series 3 and 4, Rubinoff began to work with Cor-Ten steel, which has rusted quite magnificently in the outdoors. In Series 3 he investigated the ability to give the steel a graceful, airy lightness – using thin, simple elements. The works in Series 4 – perhaps the work with which he is most closely associated – are big, aggressive, complex and ambitious.

It was during the period of Series 3 and 4 – 1983 to 1986 – that Rubinoff's art reached a high point, Fox explains in his book. "It is probably no exaggeration to say that by 1986 Rubinoff was on the verge of becoming a major name in North American modern sculpture," Fox writes. One work from Series 4 was installed at New York's Marlborough Gallery; Rubinoff's work was seen in Art in America magazine, Fox says.

But instead of staying with what was making him successful, Rubinoff moved on to investigate different forms and materials – shiny stainless steel and spheres for Series 5. Series 6 was completely different again: smaller works in Cor-Ten steel inspired by natural history – geology, biological evolution; in particular, the Burgess Shale, a fossil site in B.C.'s Rocky Mountains. Further, two works in that series strayed firmly and uncharacteristically into political territory – Nike of Baghdad and Desert Storm, both from 1991.

"This is a very droopy and dejected Goddess of Victory," Koernig of Nike says during a tour.

Rubinoff, who turned 71 the day before our visit, is extremely well read – a deep and articulate thinker on political, social and ethical issues. (We spent a fair bit of time discussing the military industrial complex, the Enlightenment and Simone de Beauvoir.) But these political statements – provoked by the first Gulf War – are rare in his oeuvre.

In 1996, Rubinoff opened a gallery in Manhattan's Chelsea neighbourhood, Two Sculptors Gallery, with artist Don Bonham, who died in 2014. They brought in works from other artists as well. "We had beautiful shows," he says. "But we never sold anything."

Rubinoff was drawn increasingly to Hornby and in 1998 began shaping the land and repurchasing his own works to create the Sculpture Park that he opened to the public in 2004. He no longer offered his work for sale. "I wasn't interested in selling," he says.

When I visited in the fall, Rubinoff had just completed what would probably be the penultimate piece in Series 9 – wildly different once again, large and spiky grand statements. On what was becoming an increasingly blustery afternoon, he made an exception and allowed us into the studio, pulling back the sliding door and revealing a sculpture, almost ready to be moved outside.

"I don't like people in that technical space; the sculpture really belongs outdoors where it's going to go," he says.

Rubinoff likes to leave the work outside for a year to allow it to weather in the elements before installing it, but he was not planning to do that this time.

Music is a key element in his practice – he says he sees "music as sculpture in elastic space and sculpture as music in plastic space" – and the park hosts a concert series in the summers – all free (so are visits and tours).

There is also an annual gathering of art historians, academics and critics, the Company of Ideas, to discuss Rubinoff's work. And he is funding publishing and research fellowships for scholars, including Jeffrey Rubinoff Art as a Source of Knowledge endowments at the University of Victoria and Cambridge University. The park is endowed in perpetuity.

"This will go on and on," Rubinoff says. "There's no reason for this to stop." 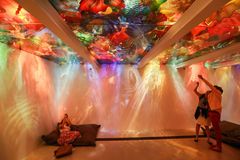 Russell Smith: Artists and computer engineers share a common cause
December 21, 2016
Public art project to liven up Montreal’s Highway 20
December 2, 2016
Follow Marsha Lederman on Twitter @marshalederman
Report an error Editorial code of conduct
Due to technical reasons, we have temporarily removed commenting from our articles. We hope to have this fixed soon. Thank you for your patience. If you are looking to give feedback on our new site, please send it along to feedback@globeandmail.com. If you want to write a letter to the editor, please forward to letters@globeandmail.com.
Comments