The once and possibly future Asian Punk Boy is drowsing ‘neath the shade of a tall jack pine when I first encounter him on a warm, verging-on-hot afternoon. Four or five years ago, if you’d caught Terence Koh in a similar position, it would have been somewhere in New York, maybe at the Asia Song Society (a.k.a .ASS), his all-white artists space in the Lower East Side. The lassitude would have been explained as the inevitable comedown from an exhausting round of transgressive art-making or an all-night gallivant with pals like Lady Gaga, Vito Schnabel and Terry Richardson.

His clothes, too, would have been different – a monky-fur coat, perhaps, with a Comme des Garçons shirt underneath, leather Converse sneakers, metal Balenciaga leggings, everything white. This afternoon, though, the 37-year-old Koh seems to be channelling the haberdashery of the farmer in Grant Wood’s American Gothic: dungarees over a nondescript long-sleeved grey cotton top, sockless feet clad in felt slippers. He’s a country boy, in other words. A hipster Huck, a bo-ho Eddie Albert.

The garb, however, is not just because, as some might construe, Koh is slumming it in the bucolic, piney, cedar-scented splendour that is the grounds of the McMichael Canadian Art Collection on Toronto’s northwestern outskirts. Yes, the McMichael, famed as both burial site of most of the Group of Seven and showcase for the Group’s work, is the site for two outdoors projects Koh has been commissioned to realize as part of the 2014 Luminato Festival. (The event marks Koh’s first solo show in Canada – a rather amazing fact given Koh’s Canadian citizenship; it’s also the first occasion in Luminato’s eight-year history to occur outside Toronto.) But his presence here also is reflective of changes in his life, the most radical being a move out of Manhattan more than a year ago to an unnamed place in the green acres of the Catskills. There, with his boyfriend, graphic designer Garrick Gott, he tends to his garden, eats healthily, goes to bed at a decent hour, reads Alan Watts and Krishnamurti, ponders the koans of Zen Buddhism and just generally tries to embody the notion that “the greatest art is the art of living.”

“I’m not so much just about me any more,” he says.

Can it last, you wonder. Koh, slight, soft-spoken, thinks it will. “Who you are you are,” he observes as he takes his visitor on a stroll of the McMichael grounds. “Different parts of you show up at different times – calmness, excitement, whatever. But I like this calmness. I think it’s going to stay. It’s a nice feeling.” But should it not, is anyone going to be surprised, even Koh? After all, the artist, born in Beijing, adopted at age 5 and raised mostly in Mississauga, made his reputation internationally as a full-bore provocateur practically from the day he graduated in 2002 from what is now the Emily Carr School of Art + Design University in Vancouver. Living first in Los Angeles, then New York, he worked in a vast array of idioms – performance, ’zines, sculpture, installation, a website slugged asianpunkboy.org, sound, costumery, sperm.

In 2006, the ever-on-trend Charles Saatchi purchased a dozen or so Koh sculptures for his London gallery, including a plaster cast of the the Greek god Hermes covered in sugar and diamond dust called Crackhead, and a crow made of white neon titled Big Cock. While more outrages ensued – “Kohbunny Undies,” anyone? A stained pair could set you back $100 – Koh observers noted a pronounced shift to a more overtly spiritual register in his 2011 performance piece at the Mary Boone Gallery in New York. Titled Nothingtoodoo, it saw the white-clad artist slowly circling a huge cone of rocky solar salt. Eight hours a day. Five days a week. On his knees. For close to three weeks. 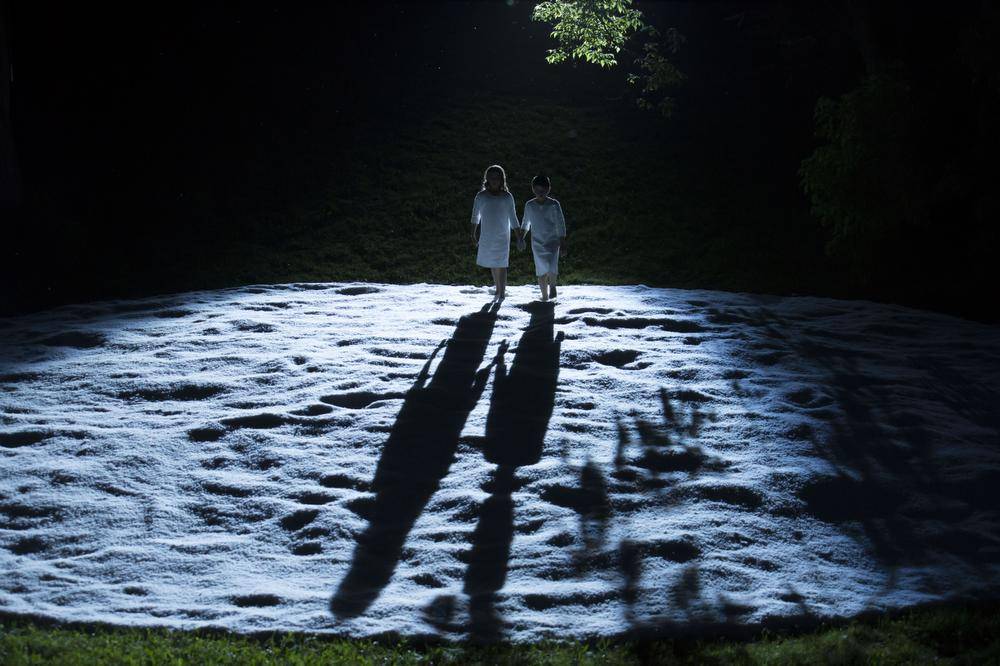 One of Koh’s McMichael projects is similarly performative. Mercifully, however, tomorrow’s snow has none of the penitential astringency or extremes of Nothingtoodoo, including duration. Inspired by Koh’s creative misremembering of a scene in Margaret Atwood’s 1988 novel Cat’s Eye, it’s the essence of poetic simplicity: At dusk, a boy and a girl, clad in white, leave the woods and, hand-in-hand, approach a hollow filled with snow (in this instance, a biodegradable product manufactured by North Vancouver’s Sno-FX). Walking into the centre of the mound, they lay down, then silently, synchronistically make snow angels. It’s all (or almost all) organized on a system of eights, 8 being at once the luckiest digit in Chinese numerology, the only symmetrical number and the symbol for infinity. There are eight performances in total, one per night through Friday June 13. Each performance lasts eight minutes; 35 boxes of artificial snow have been brought in (3 + 5 = 8); and each of the performers – there are six in total – is eight years old. One anomaly is the start time, 9:30 p.m.: Koh had hoped it could start at 8:00 p.m. but the light proved too bright for the necessary misterioso.

The other half of the McMichael project is a homage to the namesake of his alma mater, the painter Emily Carr (1871-1945). Koh admits “painting was always something that never really struck me.” Further, he knew very little about Carr until Luminato’s artistic director Jorn Weisbrodt suggested to him in late 2013 that he think about honouring her in some way on the McMichael grounds. Koh, who’s since become something of a Carr fanatic and scholar, eventually hit upon planting a pine – an eight-foot one, of course, at the base of the rise that’s the burial site of Carr’s friends in the Group of Seven, including her most ardent champion, Lawren Harris. 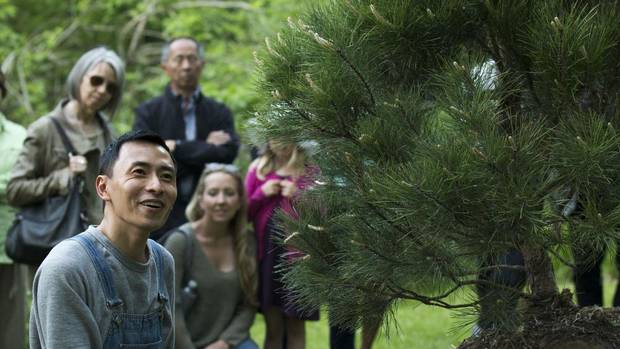 Koh says he walked around the McMichael grounds for days looking for the most apt site to plant a pine for Emily Carr. (Mark ONeill/Luminato Festival 2014)

Koh says he “walked around the grounds for several days,” looking for the most apt site, guided by the question: “If Emily was a tree, where would Emily want to go?” Once he found a clearing where he felt “she had a fighting chance to grow and thrive,” he composed a haiku: “For Emily Carr/Growing straight towards God’s light/Seasons forgotten.” Titled a way to the light, the haiku is inscribed on a small wooden plaque at the base of “the Emily tree,” with Koh identified simply as “TK.”

tomorrow’s snow, a free Luminato event, happens each evening through June 13 on the grounds of the Michael Canadian Art Collection, 10365 Islington Ave., Kleinburg. A return shuttle bus to the site leaves each evening at 7 from the festival hub at David Pecaut Sq., Toronto. Details at luminatofestival.com.