Art mavens like to describe the auction market for so-called important Canadian art as "blue-chip" – but perhaps, almost a half-century after Sotheby's hosted its first live sale of such art in this country, the more apt descriptive is "immature."

Certainly it's immature compared to the markets in, say, the United States and Britain, where it's common (and has been for years) for work, often challenging work by still-living (or relatively recently deceased artists) like Gerhard Richter, Jeff Koons, Damien Hirst, Andy Warhol, Jasper Johns and Francis Bacon to rival and occasionally surpass the sums fetched by a van Gogh, Titian or Picasso. In Canada it seems you have be one very dead white guy buried, preferably, under a huge mound of snow or crimson maple leaves to receive that sort of approbation.

This immaturity was affirmed late last week with Heffel Fine Art Auction House's sale in Toronto of 162 lots, almost evenly split between lots of "Canadian post-war and contemporary art" and those described as "fine Canadian art" (art, in other words, created largely before the Second World War). The results for the evening, however, were anything but even: Paced by the $1.1-million sale of a 1913 Lawren Harris street scene, the "blue-chip set" – besides Harris, it includes Emily Carr, Tom Thomson and David Milne, among others – wooed $8-million from collectors' pockets. By contrast, the post-1945 stuff earned just $3.5-million, half of that total courtesy of the sale of two paintings each by those unrepentant avant-gardists William Kurelek (1927-1977) and Jean Paul Lemieux (1904-1990). A strong Guido Molinari abstract, meanwhile, was declared unsold after bidding failed to reach the low end ($70,000) of its estimate.

It's true that Canadian auction houses have tried in recent years to sell art of more recent vintage, or that doesn't hew to the spacious skies/autumn fields/raging cataracts/contented cows aesthetic that's been their bread and butter. Largely this has been the result of necessity rather than choice, as the great Thomsons, Harrises, Varleys and Milnes are, for the most part, safely ensconced in public galleries or with private collectors not facing liquidity crises. Often, however, their commitment has seemed half-hearted or reluctant, even unsophisticated ("contemporary" seems to be the rubric under which a 1950 Lawren Harris abstract painting can be lumped with a 1992 Joe Fafard sculpture and a 1979 Norval Morrisseau) and their sales techniques, while proven effective in moving units of A.Y. Jackson and A.J. Casson, ineffective in reaching contemporary buyers. Like Stephen Harper and Mitt Romney, they seem most at ease marketing to their base, and an ever-aging one at that.

Canada certainly has living or recently living artists with established or burgeoning international followings – Jeff Wall, Rodney Graham, Ian Wallace, Ken Lum, Edward Burtysnsky, Evan Penny, Betty Goodwin, Shary Boyle among them – but their wares rarely if ever surface at Canadian auction houses. And why should they? The trajectory of each of their careers has been made almost entirely without pit stops in the Canadian resale scene. Today, when a Wall photo installation comes up for auction, it's in New York, not Toronto, and it's going to cost you more than $3-million (U.S.), as happened earlier this year.

If Canadian auctioneers are serious in their talk about contemporary or at least post-Second World War consignments being the Future, they're going to have to dedicate more time, imagination and resources to it. Last year, Waddington's helped set up Concrete Contemporary Auctions and Projects to this end. Its first sale, in March 2012 in Toronto – billed as "the first ever commercial auction of premium Canadian contemporary art" – produced mixed results, but at least it represented a concerted effort, an effort Concrete plans to make again, same time next year. An urban and urbane country like Canada deserves an auction market reflecting that.

The Billy Jamieson collection: Auctioning off the wild things in Toronto
November 16, 2012 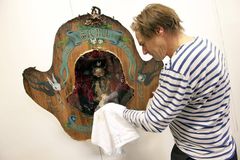 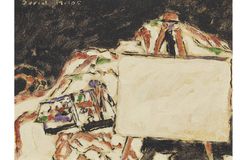 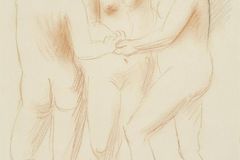 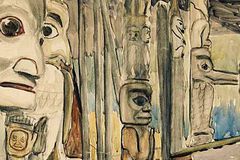