In his Toronto studio this week, the 39-year-old artist Kim Dorland said: "If I am still painting in 40 years, I think this will be one of the paintings that I'll look back on as being the most important." The occasion for our meeting was the imminent departure of a fresh crop of his paintings for New York. Less congested than the inches-deep impasto paintings for which he has become well known ("It's about having the maturity to know when the painting has to stop," he told me, laughing), the new works continue to explore the landscape, the human figure (in particular, that of his wife and muse, Lori) and the legacy of Canadian historical art.

Dripping Dream, which he was alluding to, is indeed quintessential Dorland. Painted a fiery orange-red and streaked with smeared and clotted black, it depicts the artist in the woods at Emma Lake, the site of the legendary artist retreat in Saskatchewan. The painting's source was a photograph of the artist taken by a friend, and it documents his first attempts there at en plein air painting. Seated at the easel with his legs comfortably crossed, he seems utterly engaged in his art making. "Everything about the pose is built into that single brushstroke," Dorland said to me, indicating the single downward stroke inscribed on the painting's canvas-within-a-canvas. "It activates the whole thing."

Rather than seeming idyllic, though, the scene feels claustrophobic, even nightmarish. All around him, the chaos of nature threatens to press in, as does the weight of cultural memory. Dorland borrows the experimental brushwork of Tom Thomson, the painterly gestures of American abstraction, the David Milne-like use of the under-painting to outline form and the presentation of painting as a civilized pursuit best undertaken in a tweed jacket and brogues, à la Group of Seven. Repeatedly, even compulsively, Dorland refers back to that seminal, early-20th-century moment in Canadian art in which the northerly reaches of Ontario were opened up for resource extraction and tourism. One wonders: Is this the forest that bears down upon the subject, or the charged artistic traditions of the past? Dorland puts himself in the hot seat.

Emma Lake, too, is a historically weighty place. For four decades, it was a pivotal point of convergence for Canadian artists and visiting artistic dignitaries from the United States and beyond. (Jules Olitski, Barnett Newman, Kenneth Noland and the critic Clement Greenberg were among the program leaders.) The workshop has now ceased to be; Dorland's visit in 2009 was one of the last.

"It's an amazing place," he said. "If you go for a walk in the forest, you come across easels and chairs that have been just left out in the woods. There are rocks that still have the paint scrapings on them where people cleaned their brushes." He added: "I think there's an Anthony Caro sculpture out there somewhere that no one can find."

Other pictures from his new show continue to tangle with the landscape tradition. A small blue painting of Lori hip-deep in a lake, with her fingertips just grazing the flat surface of the water, is another play on planar composition. The End, a giant forest-scape diffused with dazzling light, suggests the euphorias of Fred Varley or Emily Carr, embodied here in spray paint. A new medium for an old message.

Kim Dorland: Ghosts of You and Me will be on show at Mike Weiss Gallery in New York from May 2 to June 8. At the McMichael Canadian Collection in Kleinberg, Ont., this fall, Dorland will exhibit a survey of his paintings along with historical Canadian works chosen from the museum's collection.

Iris Haussler: Here’s an artist who likes to show her claws
April 19, 2013 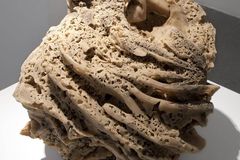 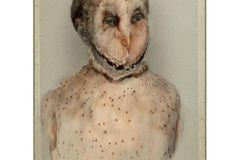 Deft in Venice: Is Lynne Cohen even better than we think?
April 5, 2013