The description on the outside of the box reads, "Metal Table Lamp." And when you peer inside, that seems about right. There is a stainless-steel cylinder 69 centimetres tall, perforated with about 30 petal-like shapes, and inside the cylinder, mounted in a socket atop a spindle, is a 60-watt light bulb. Plunk the felt-covered base on a table, plug in the electrical cord, flick the switch on the cord, et voila, a metal table lamp.

But there is one other component to the object: a knob on the base that when turned on sets the perforated part of the cylinder whirling. Within seconds, to the sound of a discreet metallic whir, the rotating cylinder is stroboscopically splaying light around the room, the turntable circling at 78 rpm.

Behold, ladies and gentlemen, the Dreamachine. In commercial production at last and soon, if the cosmos unfolds accordingly, available in a mall near you.

And behold it you must. To simply use the Dreamachine as a lamp to read Fifty Shades of Grey is entirely beside the point. No, the trick is to sit close to the whirling cylinder, close your eyes, then let the lights! colours! patterns! hallucinations! (near the end of a recent 50-minute session, yours truly kept seeing an eyeball floating inside a pyramid – an image found on the back of the U.S. one-dollar bill) arise, vanish, then arise as the oscillations flick flashes, eight to 13 per second, onto your eyelids, inducing, for some at least, a drug-less high. Or, as the Dreamachine's more passionate adherents prefer, "a throwing back of the limits of the visible world."

The Dreamachine is hardly new. Indeed, the effects of pulsating light on the brain have been studied by scientists since the early 19th century. What is unclear to this day is precisely what brain mechanisms are producing the patterns and images initiated by the strobe. Is it because the light stimulates alpha waves in the brain – the waves most associated with "wakeful relaxation" and the creative state – so that one is dreaming with eyes wide shut? Or are they side effects – a function of the brain responding to the relentless spasms of light by rapidly creating a series of "file folders" to make sense of the stimuli?

The Dreamachine – invented by a once-obscure, now-legendary British-born artist, writer, performer, one-time resident of Edmonton, and all-round provocateur named Brion Gysin and a English mathematician, Ian Sommerville – has been prompting these sorts of questions for more than a half-century.

Gysin got the idea for the apparatus in late 1958 via an entirely "natural high": Travelling at sundown on a bus to Marseilles from Paris, he closed his eyes as the bus entered a long enfilade of evenly spaced trees. The resultant flickering, he later wrote, "swept him out of time" into "a transcendental storm of colour visions." Recounting the experience to his friend, Beat legend William S. Burroughs (Naked Lunch), he announced his determination to find a way to reproduce it mechanically.

The Dreamachines produced since then have tended to fall into two broad categories. Many have been cumbersome, handmade affairs of limited durability, sometimes no more than a tube of paper with holes in it, set on a rotating record turntable with a light bulb dangling from above. Others have been specialty items, produced with exotic materials and selling for $500 to $3,000 (U.S.).

Now, though, the Dreamachine seems poised to move from cult artifact/underground semi-secret to household object, thanks to John Weitner, a 59-year-old venture capitalist from Fort Erie, Ont., and Johnny Smoke, 36, an artist, former gallerist, software writer and jack of all trades from Niagara Falls. Late last year, after much research and testing, they ordered the manufacture of about 650 "plug-and-play" Dreamachines from a factory in Guangzhou, China. The devices will be sold online this fall and the two hope that they will be available soon through department stores, lighting shops and other retailers.

Maybe even bars and hospitals will make use of them. Writer Margaret Atwood already has one. Ditto actress Lisa Ray, Gysin literary executor James Grauerholz, record producer Rick Rubin and the lobby of the famous Beat Hotel in Paris, a favourite Gysin hangout. And you can too – if you have $399, exclusive of taxes and shipping.

Sacrilege, you say? In fact, this mass marketing of the Dreamachine represents the belated realization of an idea Gysin himself entertained. Dying at 70 in Paris in 1986, poor and embittered, he originally envisaged his co-invention as "the ultimate home leisure component," in the words of his biographer, Toronto writer (and Globe and Mail editorial board editor) John Geiger. Instead of a TV set in the family room, the suburban North American bungalow would have a Dreamachine "broadcasting … homemade optic movies" created by each member of the household.

Over the years, many famous artists and inner spacemen have tried, owned or borrowed a Dreamachine, David Bowie, Iggy Pop and Patti Smith among them. The late Timothy Leary once called it "the most sophisticated neurophenomenological device ever designed." Kurt Cobain also was an enthusiast – although it is not true the Nirvana main man used a custom-made Dreamachine non-stop for 72 hours before his 1994 suicide.

Smoke (real name: John-Mark Leonard; the nom de psychedelia derives from the 1988 Butthole Surfers song John E. Smoke) first heard of the device in the early nineties while working in a Niagara Falls record store where the proprietor was a devotee of Gysin and the many famous and semi-famous friends and acquaintances he had. (They included LSD synthesizer Albert Hofmann, poet Allen Ginsberg, poet and performance artist John Giorno and Rolling Stone Brian Jones). Smoke soon found design drawings for Dreamachines on the Web (Gysin himself included plans in a magazine in 1962) and started to make his own.

Smoke tinkered with the Dreamachine over the years, at one point selling cylinder patterns cut from styrene online, while the larger world seemed to nudge him toward a greater commitment. In the fall of 2009, for instance, during an evening of channel-surfing, he came across the final five minutes of FLicKeR, the 2008 documentary by Toronto director Nik Sheehan on the life of Gysin and the creation of the Dreamachine.

Another epiphany, in July, 2010, happened when Smoke travelled to Manhattan with Sheehan, whom he had befriended, to attend the first retrospective of Gysin art held in the United States, at the New Museum. By this time, he was entertaining the idea of mass-producing Dreamachines, even though "I was at a loss for any kind of production experience." Still, Gysin associates were enthusiastic. Returning to Canada, Smoke phoned Weitner, a retired manufacturer whom he had met 10 years earlier while doing decor work on Weitner's house in Burlington, Ont. "I told him I was tinkering around with this Dreamachine thing and he just said, "I'm in."

For his part, Weitner prefers to be "the low-key guy behind the scenes," staying mum about just how deep his pockets have had to be. "It could flop and we could be stuck with hundreds of these things," he acknowledged in an interview. "But it's kind of a unique item and there's a bit of buzz to it; I'm not too concerned about losing money on it."

Is he a Dreamachine believer? Does it allow access to a plane of reality usually hidden from us? "The Dreamachine is just a product," Weitner replied."Sure, I hope we do well with it, but I don't love the thing. It's just another business I've been involved in."

Margaret Atwood, who was given her Dreamachine by Geiger, confesses that she has yet to do "full trials" with the apparatus. "But so far it's very relaxing and aids lateral think-jumps … Good if you have a block or a problem to be solved. Unless, of course, you simply nod off, which can also be refreshing." Is she a Leary-ite with respect to the cosmic claims for the machine? "Do I subscribe to any of the more cosmic claims for anything? Not yet. I'll write home when I get there."

Filmmaker Sheehan, though, claims to have gotten to a kind of there via the Dreamachine, noting that he had "a great big miserable machine" built for FLicKeR. "It kept breaking down," he recalled – but there was one occasion "where it absolutely worked … triggering hallucinations in my brain [including] angels flying at me through the air."

"It isn't a joke," Sheehan asserted. True, when the Dreamachine first appeared, "stroboscopic light was a lot less seen, so when it was, it had a more dramatic effect. Now, we're so used to it through video games and stuff that it seems almost normal." As a result, not everyone is going to "storm the citadels of enlightenment" – a claim William Burroughs once made – but, Sheehan laughed, "I often say that on a nasty, dark November day in Canada, it's extremely pleasant to have that blast of light!"

Besides, "the genius of the new machine is that you can turn off the rotation and use it as a 'beautiful' lamp, although Gysin would likely be horrified."

Where to get one

Eager to trip the light fantastic, but don't want to wait for the Dreamachine to show up at a Canadian Tire near you? Go to http://dreamachine.ca/, where you can order the Chinese-made, Canadian-bankrolled model for home delivery.

Europeans are recommended to place orders through brianjonesjoujoukafestival.blogspot.com. Brian Jones was, of course, was a member of the Rolling Stones, a friend of Dreamachine co-inventor Bryon Gysin and a fan of the Master Musicians of Joujouka, a collective of Moroccan Sufi trance musicians. It was Gysin who introduced Jones to the Masters in the late 1960s. A portion of the European sales is earmarked to support the Moroccan artists.

If you don't want to spend the money for a ready-to-go Dreamachine, you can go on the Web, where there are numerous sites with instructions for building your own.

Note: it's estimated that the device, when the rotation is activated, may trigger an epileptic seizure in one of every 4,000 users. 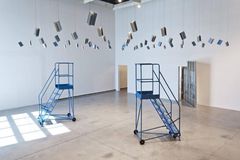 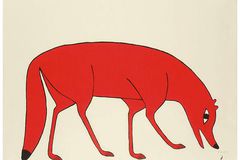 Toronto’s Museum of Contemporary Canadian Art is on the move
October 2, 2012 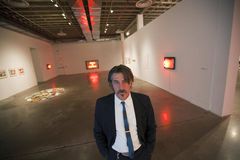