The Royal Ontario Museum chose a provocative title for this week's public discussion in Toronto about the destruction of museum artifacts, archeological sites and historic buildings by the Islamic State. "Cultural Genocide in Iraq and Syria" was the evening's topic.

Has vandalism by the Islamic State, trumpeted to the world in a February video showing the destruction of artifacts at the Mosul Museum, reached such proportions? The answer that emerged at the ROM discussion was a pretty emphatic yes. For those of us who have worried about how to frame the loss of artifacts when multitudes are being raped, murdered or displaced, it is a message that is paradoxically comforting – or at least useful. The fate of living humans and the fate of ancient stones turn out to be intimately linked.

The destruction shown in that notorious video is just the tip of the iceberg. The ROM's associate curator of Near Eastern archeology, Clemens Reichel, reviewed the debate over how many of the works shown there are actually replicas – he concluded some were but others were ancient pieces showing modern repairs – but mainly he provided the fuller context of the vandalism. The Islamic State has been systematically exploding historic buildings including Christian churches such as the seventh-century "Green Church" in Tikrit and about 100 Islamic sites including the Shrine of Jonah, a church-turned-mosque in Mosul on the site on what is believed to be the biblical prophet's grave. (The Islamic State's brand of fundamentalism rejects any cult of saints or martyrs, which may partly explain why it has targeted so many Islamic shrines.)

Canadian journalist Patrick Graham, who was working in Iraq during the period of the U.S. invasion, then added his own anecdotal perspective, recalling the link he had observed between Iraqis and a land they had inhabited for centuries, a place dotted with shrines, mosques and monuments that surround them with their history. He told a story about a cleric in Baghdad who was left to run a local hospital during the week when both the city and its museum were being looted. The man searched everywhere for missing things, collecting the medical equipment he needed with one hand while returning historic artifacts to the museum with the other.

There were plenty of other examples of this kind of contemporary identification with the past at the ROM event. Several people in the audience asked questions, most of them identifying themselves as Syriacs, members of the historic Christian community in the area; one went so far as to identify herself as a native of Mesopotamia, preferring the ancient name for the region that the ROM had identified by the names of modern states. (Reichel, on the other hand, argued you should use the modern names to indicate these ancient artifacts are located in real, contemporary places.) Another person asked how he might get information about whether his grandfather's tomb was still standing.

"These places are an expression of reality and those who dismiss them dismiss reality," Graham said. He feels the Americans were blind to this context when they arrived in 2003 and did not do enough to protect the National Museum of Iraq. But today he thinks the Islamic State is engaged in one of those insane attempts to create a new society by destroying all remnants of the old.

I had tended to see the Islamic State's actions as a mix of Islamic iconoclasm taken to fundamentalist extremes and bully-boy vandalism, but the discussion reminded me of China's assault on intellectuals during the Cultural Revolution or the destruction of libraries and temples by the genocidal Khmer Rouge in Cambodia.

These campaigns are horrific. What can anyone do? Reichel reiterated his position that no one should buy any artifact coming out of the Middle East in the mistaken belief that might protect it; you would only be rewarding looters, he said. But beyond that, his suggestion was simply to remember and talk about what is being lost. In the context, it did not feel like a platitude or shoulder shrug but useful advice.

You can kill people, but you can't kill history.

UBC professor talks about destruction of cultural heritage by the Islamic State
May 12, 2018 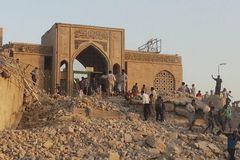 Kate Taylor: Mosul vandals make a show of power, but were the artifacts real?
May 12, 2018