Kent Monkman is a punny guy.

How else to describe someone who named his best-known artistic creation Miss Chief Eagle Testickle? Concocted some 10 years ago as a sort of two-spirited muse/alter-ego-in-drag, Miss Chief has appeared in all her raven-tressed, platform-heeled First Nations fabulousness in several Monkman paintings, videos and performances. More recently, she’s shown up in Monkman’s forays into installation art, two salient examples of which are currently on view in Toronto, one at the Gardiner Museum, the other at First Canadian Place. 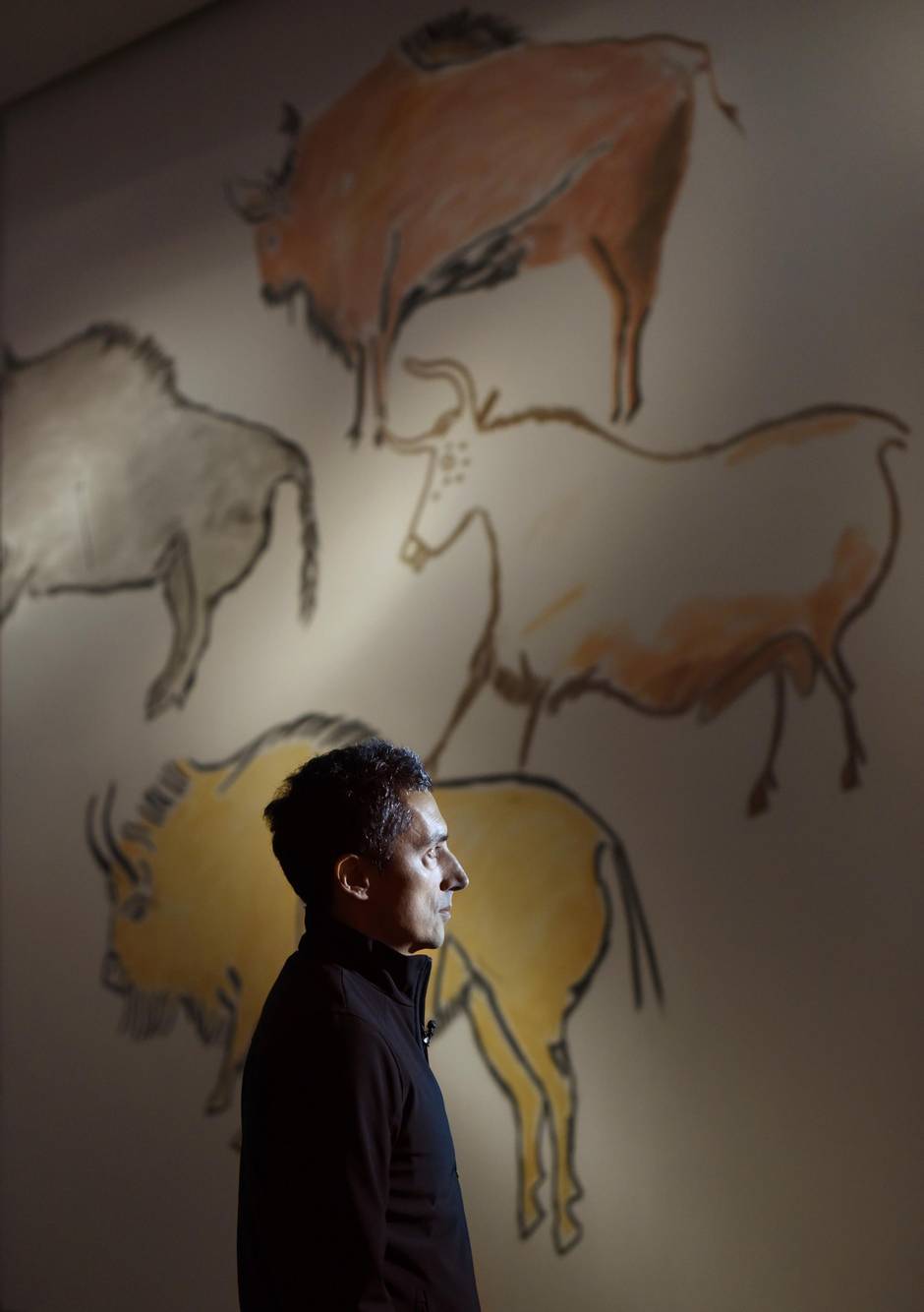 In the past two or three years, Monkman, whose ancestry is Cree, Irish and English, has had something of a bone to pick with Pablo Picasso. Generally regarded, by Eurocentric standards at least, as the 20th century’s greatest and most influential artist, the Spanish-born Picasso was an ignoble macho man of promiscuous, omnivorous appetites – and we’re just talking about his creativity here. Bull-headed, he plundered ideas, themes, imagery from contemporaries (Matisse called him “a bandit waiting in ambush”) and ancient, indigenous cultures, the most famous instance being his infatuation with African sculpture, particularly traditional African masks, early in the 20th century.

The Rise and Fall of Civilization, Monkman’s new and very large installation at the Gardiner, is being billed as a 3-D meditation on the wholesale slaughter of some 50 million North American bison by white settlers, soldiers and hunters in the 19th century. But it’s also a big swipe at Picasso, both in particular and in general as a representative of certain colonialist tendencies in the Western art tradition.

True, for almost any other artist, the slaughter itself would be sufficiently ample as a topic. After all, it very nearly starved the plains Indians into extinction, hobbled their culture and pushed them to the margins of the land as farmers and ranchers moved in and manufacturers gathered up the discarded buffalo bones to make fertilizer and porcelain. And, in fact, Monkman readily acknowledges the last scenario was the ur-inspiration for Rise and Fall, commissioned by the Gardiner in early 2014 as part of the Artist Intervention series it started in 2013.

Certainly, it’s what the viewer immediately registers upon entering the special-exhibitions gallery on the museum’s third floor. There’s a large cliff, almost three metres high, its Styrofoam material striated like a coulee, the top surmounted by shrubbery, two mangy-looking, taxidermied buffalo, a (wo)mannequin of a red-clad Miss Chief, her arm raised in – what? Judgment? Warning? A declaration of intent? Most striking, the tableau features a bull-like creature hurtling to its doom. At the base of the buffalo jump is a pile of shattered crockery, on the walls are profile paintings of 40 or so aurochs and bison, reminiscent, intentionally so, of both North American aboriginal pictographs and the ancient cave art found in Spain and France. 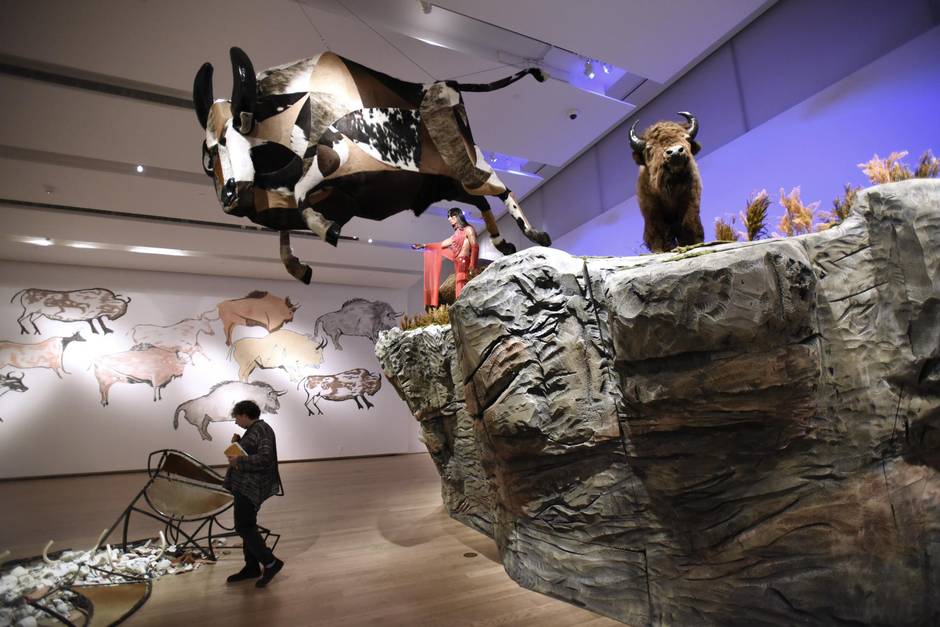 But after that immediate hit, viewers with even a passing familiarity with art history will find their minds a-swirl in a cross-fire hurricane of associations and allusions. That plunging bull, for instance, has an obviously Picasso-esque face while the planes carved on its hide-covered, fibreglass body approach both the cubistic and the “butcheristic.” Further, arising out of the shards of bone china, like ghosts or pictographs made sculptural, are the silhouettes, fashioned from iron, of five smaller but very Picasso-esque bulls. In fact, noted Monkman recently, the big bull – perhaps the most personally totemic animal in the Picasso oeuvre (or, as Monkman has bluntly stated: “The bull was an extension of his penis.”) – and the five silhouettes are pretty much taken whole from a famous series of 11 lithographs Picasso did in 1945. Using a single bull as his subject, Picasso from plate to plate progressively deconstructs, flattens and simplifies the animal’s form until, by plate 11, it is very nearly a pictograph. With Rise and Fall, Monkman as aboriginal artist niftily reappropriates into three dimensions the two-dimensional appropriation Picasso enacted for the greater glory of 20th-century Modernism. At the same time, it’s a 21st-century resurrection, in art, of a species gutted in the 19th.

Over at First Canadian Place, Miss Chief Eagle Testickle’s encounter with Picasso occurs in a simulated hospital room high above the city. Monkman got to do the installation as this year’s recipient of the Bank of Montreal’s Project Room grant. Titled Casualties of Modernity, it’s actually a double-barrelled blast. There’s the meticulously appointed hospital room, a 3-D tableau, in fact, of a worried-looking Miss Chief in a saucy nurse’s uniform tending to a prone female patient, her flattened form and face clearly inspired by the subjects of Picasso’s epochal Les Demoiselles d’Avignon (1907). 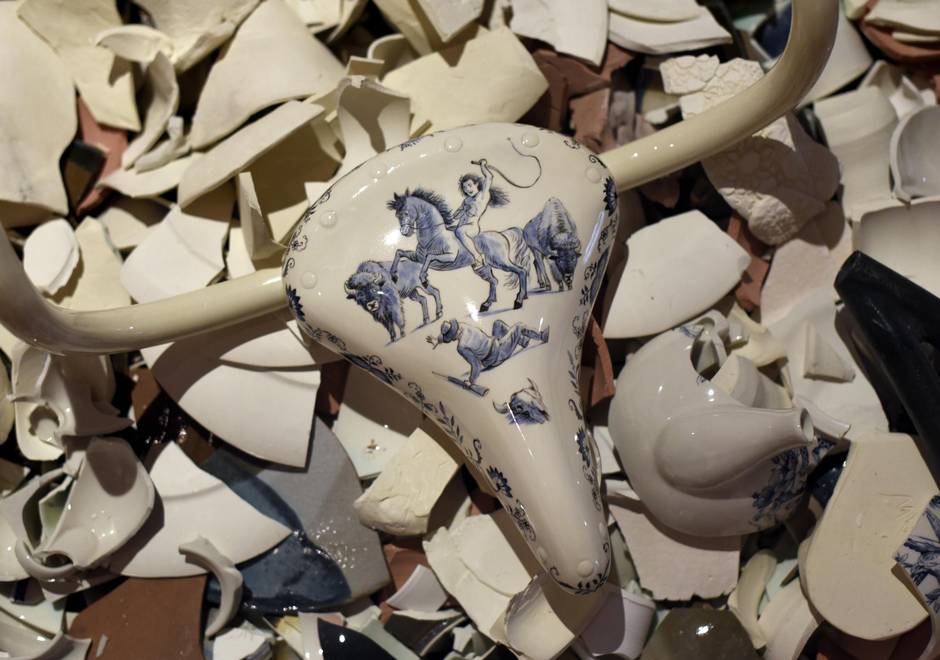 And then there’s a 14-minute video, playing on a loop on the room’s large monitor. It, too, is a simulation, of a daytime hospital soap opera, with a Princess Diana-like Miss Chief visiting the hospital’s Modern Wing to accompany a Doctor of Fine Arts on his rounds to various ailing art movements (painting, conceptual art, performance, abstracted sculpture etc.). Reminiscent of Elmgreen and Dragset’s art-world send-up Drama Queens Casualties is probably best appreciated by art-history majors, but its campy (and scampish) brio and febrile intelligence make for a fun, provocative package. And besides, it’s the first time audiences get to hear Miss Chief Eagle Testickle speak!

What’s next for Monkman? Lots of stuff, it seems, but most significantly an as-yet untitled, heavily researched, “massive multi-installation, multipainting, multivenue touring work” he describes as “150 years of reflection on the history of Canada from an indigenous point of view.” Organized by scholar-curator Barbara Fischer, it’s going to open in Toronto in 2017 to mark Canada’s sesquicentennial, then visit at least another seven or eight Canadian centres in the next two years.

Kent Monkman: The Rise and Fall of Civilization opens Oct. 15 at the Gardiner Museum in Toronto for a run concluding Jan. 10, 2016 (gardinermuseum.on.ca). Casualties of Modernity, running through Nov. 27, can be seen by appointment only (call 416-643-2609 or e-mail curator@casualtiesofmodernity.com).