Kim Dorland was looking quite outdoorsy indoors the other morning. He was wearing a plaid long-sleeved cowboy shirt untucked over a T-shirt and baggy blue jeans, serious-looking leather boots, and a tight black tuque from which protruded unruly thatches of hair. It was a fitting ensemble for the artist whose rising reputation (and fortunes) in the last few years have been based, in many instances, on paintings of forests and lakes, trees and hills, campsites, sky and fauna. Fitting, too, for the location he was in: the McMichael Canadian Art Collection northwest of Toronto, where for decades devotees of Tom Thomson, David Milne, the Group of Seven and other artists besotted by the Great North Woods have made pilgrimages.

Looks, though, can be deceiving. Dorland concedes, at 39, to being a "reasonably proficient" canoeist with a growing interest in the outdoors, but jokes that "if you threw me in a canoe, handed me an axe and told me to survive, I'd be dead pretty quickly." More seriously, he adds, "I don't want to position myself as an avid outdoorsman. My identity as an outdoorsman is not part of my practice. My work really is about the perfect psychological moment. Sometimes that moment is in nature. Sometimes it's in my living room."

Dorland is having a a major career moment as well. In recent years, the artist has headlined well-received exhibitions at important commercial galleries in New York, Montreal, Milan, Santa Monica and Los Angeles, among other cities. His larger canvasses are now fetching prices in the five figures. And his McMichael show is one of the most anticipated of the fall Canadian-art season. "If we think back four or five years ago, Kim even then was on everyone's radar and he was there for the loudness of the paint he was using," says Richard Rhodes, editor of Canadian Art magazine. "But I think if you ask most people now what they're connecting to, it's actually his imagery, which seems to have real roots in traditional Canadian landscape content but at the same time has an emotional tenor that makes it feel really immediate and visceral."

Adds Rhodes: "Does Kim need Tom Thomson? No. He's already achieved lift-off. He doesn't need Tom or the Group behind him."

Dorland is, in fact, a city boy, mostly, with a large studio – he calls it "the lab" – near the intersection of Queen and Dufferin in downtown Toronto, and degrees in fine art from York University and what is now Vancouver's Emily Carr University of Art + Design. Now, though, he seems on the cusp of a new apotheosis, and it's coming courtesy of the McMichael, an institution famous more for exalting past glories than deifying contemporary aspirations. Starting this weekend and running through early January, the gallery is presenting close to 90 Dorland paintings – the artist's biggest public outing to date – under the rubric You Are Here: Kim Dorland and the Return to Painting.

At heart, it's a solo show, taking up five rooms, but a solo show with a difference: Dorland's work – notable as ever for its size, superthick impasto, arresting textures, bold composition, narratives both allusive and elusive, and a fluorescently efflorescent palette – is positioned cheek-by-jowl with more than 50 carefully selected painting

s by Thomson, Milne, Carr and four members of the Group of Seven.

The exhibition is the result of an invitation extended to Dorland earlier this year by the McMichael's chief curator, Katerina Atanassova. Be our artist-in-residence, she told him. Go into our vaults. Look at the art. Wander the grounds. Explore the valley. Visit Thomson and Group of Seven haunts. Then produce a bunch of paintings, et voilà: We'll create a dialogue between past and present, a refutation of the notion that painting is passé, and a validation of landscape as a fit subject for contemporary art practice.

Roaming the McMichael the other day as preparators hustled to complete the installation of You Are Here, Dorland said he greeted Atanassova's offer with "a big yeah" – and "reservations." His admiration for the Group, and especially its muse, Thomson, is well-known. After enduring a tough childhood in east-central Alberta, he left his mother at age 16 to move into the Red Deer home of his girlfriend (now his wife) Lori Seymour, where, as a self-described "going-nowhere teen," he found himself thumbing enchantedly through a book on Thomson and the Group. "Before I found art," he writes in one of the panels for You Are Here, "I had no sense of the future. I could have ended up in a dead-end job or even jail, not because I was violent but because I was thoughtless. Then I found this. It is all I wanted."

Thomson remains Dorland's favourite painter. His four-year-old son – a brother to seven-year-old Seymour – is even named Thomson. You Are Here includes 38 Thomson sketches and canvases. And one of the artist's concerns was that the exhibit not be seen as a smackdown or competition – that it be done "with respect … so that it's not about dismantling anything, or taking a torch to someone or something … that it was about creating a non-confrontational space."

Another was that the residency itself "accommodate my hermit-like nature. I'm a pretty private person. And because of the nature of my practice, I needed consistent access to my studio, my airbrush, different materials. So the residency wasn't going to be so much about plein-air painting, although I did do some of that for the show." Neither would it be about publicizing Dorland's presence by, say, setting up an easel in the reconstructed Tom Thomson shack on the McMichael grounds and letting visitors watch.

Not, he adds with a chuckle, that there was ever "a danger of me being bullied into anything. I'm a pretty headstrong person with pretty clear ideas." Besides, "I'm not Tom Thomson Jr. … just because I work with thick paint and do landscapes and I'm a colourist. I don't," he says, laughing, "want this Tom Jr. moniker to follow me around" – although Dorland is the first to concede that "audiences have their own minds about these things."

For the most part, the McMichael experience was at once highly productive – resulting in dozens of sketches and full-scale paintings – and akin to having a deeply coveted wish come true, one that included what Dorland calls a "bucket-list pilgrimage" last summer, with Seymour and their children, to Canoe Lake, the site of Thomson's untimely and mysterious death in 1917.

"I took it as an opportunity and tried to not to have any fear," says Dorland of his "big yeah. … I knew there was a way to dive in and make a contemporary art show. I've always had a sort of can-do attitude – which is probably the Albertan in me."

In fact, he soon came to refer to his McMichael residency as "the sabbatical," marking as it did a welcome break from "the concerns of the commercial art world I exist in. While I've been very fortunate and I consider myself very lucky and happy to have the life I have, there are also headaches … and here was this return to pure painting."

You Are Here is an exciting, powerful show, rich in its many dialogues not only with Dorland's inspirations but with his own work – work that, by his own admission, has as many debts to, among others, Edward Hopper, Georg Baselitz, Peter Doig, the Friday the 13th movie franchise and Sasquatch stories as it does to the Group of Seven members now buried on the grounds of the McMichael.

One especially effective dialogue occurs in a corner in the exhibition's penultimate space. It is a three-way conversation involving two Thomsons – one a small but energetic sketch he did of a waterfall in 1916; the other a more substantial oil-on-canvas version of the falls completed the next year – and Dorland's own large (roughly 2-by-2.5 metres), viscously vibrant riff on the two, titled Woodland Waterfall (After Tom Thomson). The last room features the exhibition's showstopper: a triptych, 2.5 metres high, almost six metres wide, called French River: He describes the waterway dividing Northern from Southern Ontario as "one of the most mesmerizing, beautiful places I'd ever been to; I took hundreds of Polaroids for the painting."

Overall, the show affirms what Canadian art critic and scholar Robert Enright calls "Kim's immense aspiration to be better and to do a lot of work … I know he's the kind of painter who elicits strong opinions. I know painters who hate his work; I know others who really like it. In that way, he seems decidedly not Canadian because he won't let you sit on the fence. You have to take a stand on one side of the wall or the other." Pro or con, quips Rhodes, "What we have here is good programming by the McMichael."

Just how big Dorland's latest moment will be remains to be seen. The artist himself isn't bothering with such speculation. "I just wanted to put a really good painting show together," he says. "And I hope people like it."

You Are Here: Kim Dorland and the Return to Painting opens at the McMichael Canadian Art Collection in Kleinburg, Ont. Oct. 26 and runs through Jan. 5, 2014. www.mcmichael.com. 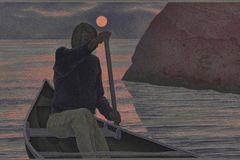 Power Plant showcases Micah Lexier’s work as a conceptual artist – and as a gifted curator
September 27, 2013 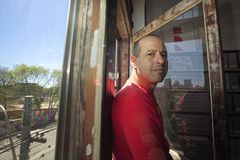 Five must-sees at 2013’s Art Toronto
October 24, 2013
Follow James Adams on Twitter @Jglobeadams
Report an error Editorial code of conduct
Due to technical reasons, we have temporarily removed commenting from our articles. We hope to have this fixed soon. Thank you for your patience. If you are looking to give feedback on our new site, please send it along to feedback@globeandmail.com. If you want to write a letter to the editor, please forward to letters@globeandmail.com.
Comments