In Montreal these days, as in most Canadian cities, daylight ends by 5 p.m. The depressive effect of the sun's early retirement is behind the tongue-in-cheek naming of Luminothérapie, the annual show of light-based art that is now in its fifth year at outdoor locations in the Quartier des Spectacles.

The downtown core regularly offers itself as a screen for light displays, including the several luminous works in the recent Biennale de Montréal. The city is enamoured of the son et lumière tradition that began in France 50 years ago, and that has evolved through 3-D projection mapping software that can turn an entire building front into a dazzling animated surface.

This year's two Luminothérapie offerings, which prevailed over 53 other proposals, have a more modest agenda. But one of them, Prismatica by Toronto's RAW Design, makes a quietly profound intervention in the urban streetscape.

The piece consists of an array of 50 vertical light boxes more than two metres high, each set up to rotate on its own base, with a little help from the viewer. These crystals are spread across the long promenade of the Place des Festivals, opposite the Musée d'art contemporain.

Each transparent box has three sides, like a prism, and a slanted top. In the base are three lights, facing upwards and programmed to shine and change colours when the prism is in motion. Give it a spin, and the lights flash off the interior surfaces and whirl over the snow nearby. There's also a wind-chime assembly in the base, which adds a faint tuneless rhythm to the prisms' smooth rotations.

Prisms divide light by refracting it into the colours of the visible spectrum, and there's a rainbow complexity to the hues that shine through Prismatica's light boxes. But what makes this installation special is not refraction, but reflection.

If you stand close to one of the spinning prisms and gaze inside, you can see the interior planes reflecting each other. The narrow space seems to expand and fill the view, obliterating the city. The box of lights becomes a hall of mirrors, with multiple images of everything in it, including your own face. Its surface also captures and reflects light from adjacent prisms.

From a distance, the spinning prisms become even more brilliant and colourful. They seem to crowd together and concentrate the light, like flashing jewels. It's a beautiful sight, and it lures people in. But once you've spent some time walking the length of the installation, that glimmering radiance is like the rainbow that you can never reach. Prismatica's culminating spectacle remains at a tantalizing distance, while each section of the exhibit shows itself in only one possible variation of light and movement.

Ambient light is a problem for some outdoor installations, but here it simply glints off the spinning prisms, adding to their brilliance. Instead of fighting to be noticed in an already luminous streetscape, Prismatica exploits the light that is already there. The whole thing is a machine for gathering and sharing energy, and a luminous metaphor for the flux and variety of the city itself.

The other Luminothérapie offering, Fascinoscope by Montreal's Luz Studio, is a series of eight large-scale projections on buildings around the Quartier des Spectacles. La Lanterne magique, on the upper wall of Place des Arts' Théâtre Maisonneuve, evokes a 19th-century magic lantern as if reimagined by Eadweard Muybridge. Le Grand Chapiteau (Big Top), at UQAM's Pavillon Président-Kennedy, shows stylized images of human cannonballs, jugglers and trapeze artists soaring across the wall.

Other projections show an interactive shooting gallery, a creepy display of eyes that appear and disappear behind doors, and a kaleidoscopic cabaret. Nostalgia for old-time show-biz and its elaborate visual style is the dominant theme, as it was of many early shows by Cirque du Soleil. Yet the means for exploring this theme are sometimes fresh and clever.

Luminothérapie will be gone by the end of the month, but Montreal's experience of collective light therapy has at least one more big instalment this winter. Montréal en Lumière, an annual festival of lights, performances and food, begins Feb. 19. 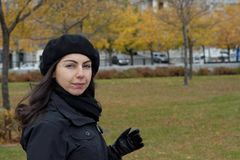 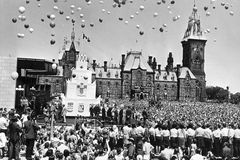 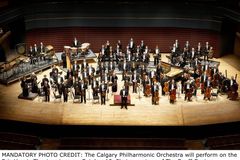 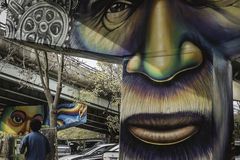