Over the past few months, sculptor Parviz Tanavoli has been described to me as a visionary who is "a giant among his generation;" a master of modern art who "almost singlehandedly resurrected sculpture as an art form in Iran"; and "quite simply the most famous and influential living artist from the Islamic world."

Tanavoli, who was born in Iran, divides his time between Tehran and Horseshoe Bay, north of Vancouver, where he has lived since 1989. But while 2015 is shaping up to be perhaps the biggest of his career, with a major retrospective that has just opened outside Boston and more to come, recognition has largely eluded him at home in Canada.

"When people abroad question me, I'm embarrassed, to tell you the truth. They say, 'Okay, you are a Canadian, you're living in Vancouver, why don't you have a show in Vancouver?'" he said during a recent interview.

"I [don't have] an answer. Why am I not taken seriously here? Why? So we have a proverb [that] says when God closes the door on you, another door opens somewhere else. So this door was closed on me, but other doors were open to me now."

Tanavoli, 77, was speaking in his oceanfront B.C. home, where the sunken living room during my past visits has been crowded with his distinctive work, but is now largely emptied of it, much of it having travelled to Massachusetts for the large Parviz Tanavoli show at the Davis Museum at Wellesley College. Over coffee and almond cake served by his wife, Manijeh, Tanavoli reflected on what has been a most tumultuous and triumphant year, beginning with the seizure of his artwork from his Tehran home last March, followed a few months later by the surprise invitation from the Davis to mount this major show.

Tanavoli is widely regarded as Iran's most significant modern sculptor – and one of its most important contemporary artists. He has also been a hugely influential teacher who has taught and mentored generations of artists – at least 600 students, by his count. With the 1979 Islamic Revolution, he retired as head of the sculpture department at Tehran University. In 2008, his bronze sculpture, Oh, Persepolis, sold for $2.8-million (U.S.) at Christie's in Dubai, setting world records for work by a contemporary Middle Eastern artist. His work is in the permanent collections of the Metropolitan Museum in New York and Tate Modern in London, among others.

He works in many media, but is probably best known for his bronze sculptures, which reference Persian traditions but are also unquestionably modern. Locks are frequently referenced. His signature Heech works are based on the calligraphic script for the Farsi word for "nothing" or "nothingness."

From nothing has come so much – especially this year. In September, he will be one of the artists featured in the World Goes Pop exhibition at Tate Modern. He has work in the Armory Show in New York in March. Vancouver-based filmmakers Terrence and Timothy Turner have just completed a documentary about the artist, Parviz Tanavoli: Poetry in Bronze. And the Davis show marks a huge career milestone; his first retrospective to be mounted by a U.S. museum.

"I was waiting for this for, I don't know, over 20 years. Because I have worked all these years but I haven't had anything major after the Revolution. I have participated here and there in good shows in Europe, in the States, in Iran, but this is a major show," Tanavoli says.

"And the body of work kept accumulating and accumulating and [there was] really no more room. [It's] in storage everywhere … and my family was getting nervous. 'Why do you make so many works? You have enough.' I said, 'Well, maybe somebody is going to knock on the door and ask for it.' And it happened that somebody came and knocked at the door, unexpectedly."

That metaphorical knock at the door came a few months after a more literal breaking down of doors last March. Jet-lagged, having recently arrived in Tehran, Tanavoli woke to the sound of his daughter screaming. Tanavoli knew what it was about.

In 2003, Tanavoli sold his house to the city, which was to turn it into the Museum of Parviz Tanavoli. The sale included nearly 60 Tanavoli works. But a few months after the museum opened, it was shut down by the city's new mayor – Mahmoud Ahmadinejad, the hardliner who went on to become Iran's president.

"He said this was a Western derivation and not our culture and he closed down my museum," Tanavoli says.

Thus began a years-long battle, which saw Tanavoli get his house back – it remains his base in Tehran – and, last year, a few of the sculptures. But then, a few weeks after the work was returned, the raid. Tanavoli watched as his precious art was mishandled. In a video, shot by his daughter, workers awkwardly try to load an unwrapped and enormous bronze onto the back of a truck, but it falls to the ground. Over four hours, a group of men – Tanavoli says they were cheap labourers just hired off a street corner – removed 11 pieces.

"My daughter said, 'You didn't talk for three days,'" he recalls back in West Vancouver, taking a deep breath. "I didn't know what to say. I became mute."

As the case continues before the courts, Tanavoli found a port in the political storm with the invitation from the Davis.

"His ingenuity and his focus distinguish him," says the show's co-curator Lisa Fischman, who is also director of the Davis Museum. (It was Fischman who says Tanavoli almost singlehandedly resurrected sculpture as an art form in Iran.)

The exhibition – on until June 7 – includes more than 175 objects dating back to the 1950s. It features seven new monumental works that have never been shown and a centrepiece garden of Heech sculptures.

Fischman says she was "massively surprised" to learn that Tanavoli has not had a major show at a Canadian institution. "It's hard to know really the rationale when someone slips under the radar, when an artist of this calibre, with this kind of career – 60 years of extraordinary work under his belt. How does that person escape attention?"

He almost didn't. A few years after arriving in Vancouver, Tanavoli approached the Vancouver Art Gallery. The director at the time, Brooks Joyner, received him warmly, Tanavoli recalls, and in anticipation of a VAG show, Tanavoli shipped a number of artworks to Vancouver from Iran. But Joyner resigned unexpectedly, and Tanavoli never got his show.

He says he offered to donate one of his sculptures to his successor, Alf Bogusky, but it was refused.

When I mentioned that Tanavoli had never had a show at the VAG in an e-mail to art critic and former chief curator of the Tehran Museum of Contemporary Art, David Galloway (a friend of Tanavoli's who has written about him, and the source of the "most famous and influential living artist from the Islamic world" quote), he responded with outrage, labelling it provincialism. "That one should even wonder about the significance of Parviz Tanavoli is astonishing," he wrote.

Tanavoli has had his work exhibited here, most recently in 2013 at Safar/Voyage: Contemporary Works by Arab, Iranian and Turkish Artists at UBC's Museum of Anthropology. This is where Terrence Turner, the documentary director (who called him a visionary), first became aware of his work. "I was so overwhelmed by it, in its presence, I thought I need to do something about this," he told me, adding he was and remains surprised that Tanavoli continues to fly under the radar.

"It's literally like having Henry Moore living in Vancouver, except that nobody knows he's here.… My hope would be that the film will let people know that there's this kind of master in their midst. You don't have to love his work but you should appreciate that he's here."

Emin’s I Promise to Love You: A hypnotically involving digital display
February 22, 2015 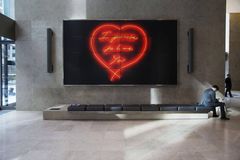 The Greeks: An exhibition of artifacts with an agenda
February 15, 2015 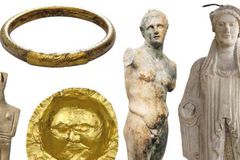 Stolen U of T painting was by unknown artist, not Francesco Guardi
February 18, 2015 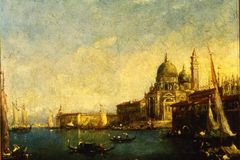 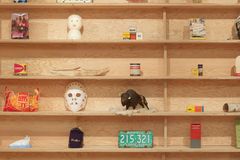