A 50th anniversary is a big deal for a cultural institution. There’s enough history to celebrate, consider and, in some instances, reconsider. There’s the opportunity to refresh the institution’s profile and evaluate its position within contemporary art discourse. It’s an occasion, too, to strategize, to wonder, “Now what? Sure, we’ve made it this far – but what needs to be done to ensure another half-century?”

The McMichael Canadian Art Collection is in the midst of just such a rumination – an exercise brought into even sharper focus last week when the famous woodsy gallery here, 40 kilometres northwest of Toronto, named British museum professional Ian Dejardin as its new director and chief executive officer. Lest we forget, it was 50 years ago this summer that the McMichael first opened its doors to the public as a Crown corporation of the province of Ontario. The deal that, on paper at least, transformed the McMichael from the fiefdom of founders Robert and Signe McMichael into a public trust had been reached in November, 1965. However, extensive and expensive renovations to the site meant that its roughly 200 artworks weren’t ready for their close-up until July. 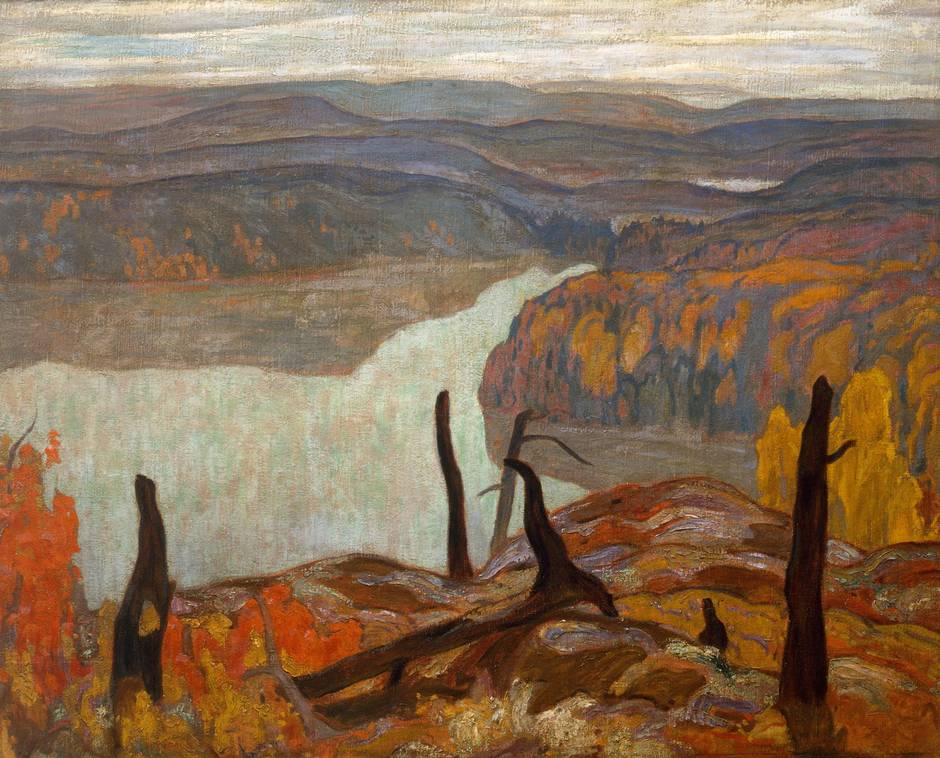 Called, initially, the McMichael Conservation Collection of Art, the “collection” referenced in the moniker was unashamedly Canadian. Or at least unashamedly Canuck in its devotion to art of a particular ilk, namely oil sketches, drawings and paintings by the Group of Seven, Emily Carr and their contemporaries and followers, plus work by First Nations artists. Even today, after a half-century of change and turbulence, mention of “the McMichael” in conversation is guaranteed to elicit visions of a log-beamed, stone-studded barrack purveying and defending that old-time Cancon culture, a country club for the art of (mostly) old men.

Unsurprisingly then, the McMichael is choosing to mark its 50th with an all-Canadian showcase weighted heavily toward the familiar flat rectangle (a.k.a. the painting) that’s been the collection’s signature medium. Blessedly, it’s not a tired-but-true “greatest hits” compilation but rather three distinct yet complementary presentations existing in what McMichael chief curator/exhibition overseer Sarah Stanners calls “purposeful contrast.” Taken as a whole, the three – A.Y. Jackson and Tom Thomson: Wounds of War, Colleen Heslin: Needles and Pins and Jack Bush: In Studio – constitute a 100-year haul through the collection’s complicated history and prehistory at the same time as they bring forth the ignored, subterranean or implied potentials and histories of the McMichael project. 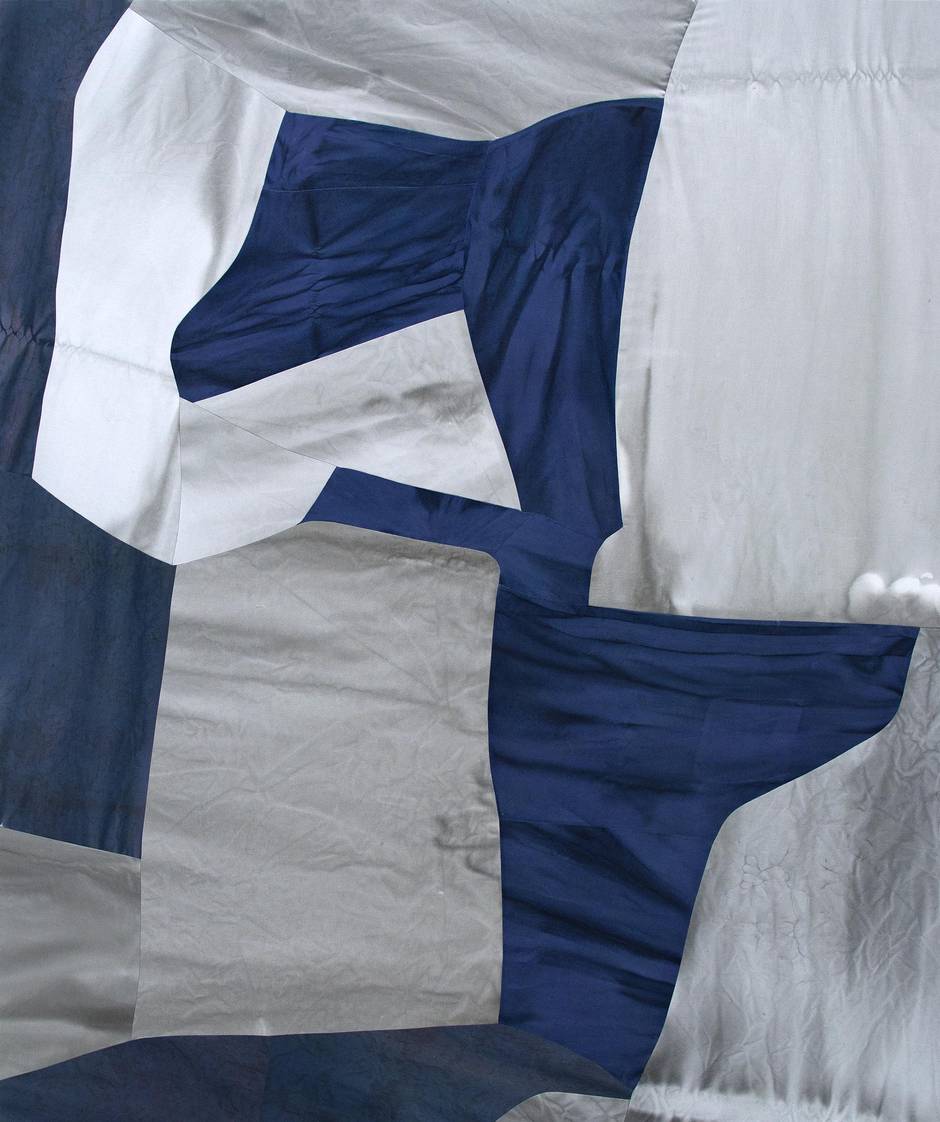 The Thomson/Jackson show is the most traditionally “McMichael-esque” of the trio. Curated by former Canadian War Museum historian-curator Laura Brandon, it’s an exploration of the artistic kinship between the two famous painters whose intense, brief friendship was sundered by the First World War. Jackson enlisted in early 1915 and, after being badly wounded in Belgium in June, 1916, then becoming an official war artist, did not return to Canada until 1918. By contrast, Thomson, five years Jackson’s senior, never did enlist (for reasons still not entirely clear yet much-speculated upon), choosing instead to serve as a fire ranger. By the time Jackson was back in Canada, Thomson had been dead for more than a year, having drowned in Canoe Lake, Ont., in the summer of 1917. Three years later, Jackson was helping form the Group of Seven, in part to honour his dead friend.

In and of itself, the Thomson/Jackson show would have been an effective, tightly focused, bittersweet presentation. But by displaying it in the context of the McMichael golden anniversary, adjacent to the immense, bright, bold Colour Field paintings of Toronto’s Jack Bush (1909-1977) and Vancouverite Colleen Heslin’s more muted and quirky field work, Stanners both highlights the peculiar history of the McMichael and creates an expansive conversation with idioms that the collection’s founders deemed anathema. 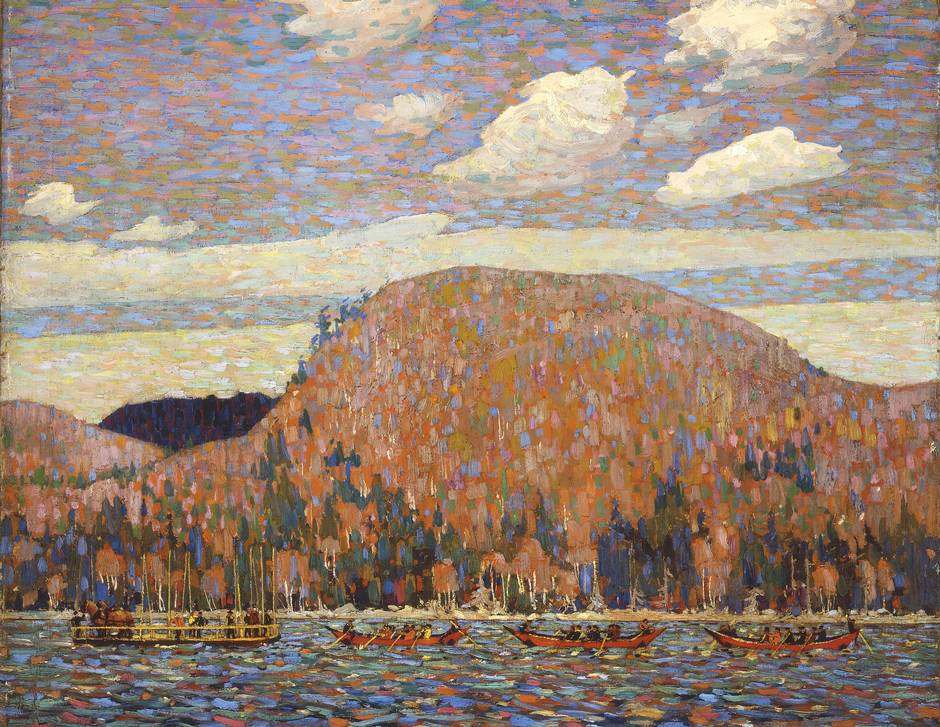 So, for instance, Thomson’s The Pointers (1916-17), on loan from the University of Toronto’s Hart House, isn’t solely a majestic autumn scene here, painted in a neo-postimpressionist key, but also a stellar example of the use of colour as form and structure – analogous, in other words, to what Bush perfected in his abstract canvases of the mid-1960s and 70s. Similarly, it’s hard, at least in this context, not to see the flat, aquamarine-coloured, trapezium-like lake in Jackson’s October Morning, Algoma (1920), another Hart House loan, as a kind of progenitor of the forms Heslin’s affixes to the surface of, say, her 2016 construction Chain of Command.

“Peculiar” may seem a, well … peculiar adjective for the McMichael. It’s apt, however, because the gallery has been such a venerated fact in the Canadian cultural landscape that we occasionally need to be reminded just what an act of will it was by its two creators. (Robert McMichael tellingly titled his 1986 memoir One Man’s Obsession.) Remember, the original Group of Seven had been defunct for 22 years by 1955, the year 34-year-old Robert McMichael and Signe, also 34, bought their first painting, a small Lawren Harris completed in 1920. A.Y. Jackson was almost 40 in 1921, the year of their births, 83 in 1965, the year the couple “gifted” their house, land and collection to Ontarians.

The whole project, in other words, was a big bet on the past and the mythology of that past at the very moment a fiftysomething Jack Bush, working in a modest studio in his north Toronto home, was at or near the height of his powers, represented by André Emmerich Gallery in Manhattan and Waddington’s London and championed by one of the century’s most influential critics, Clement Greenberg. 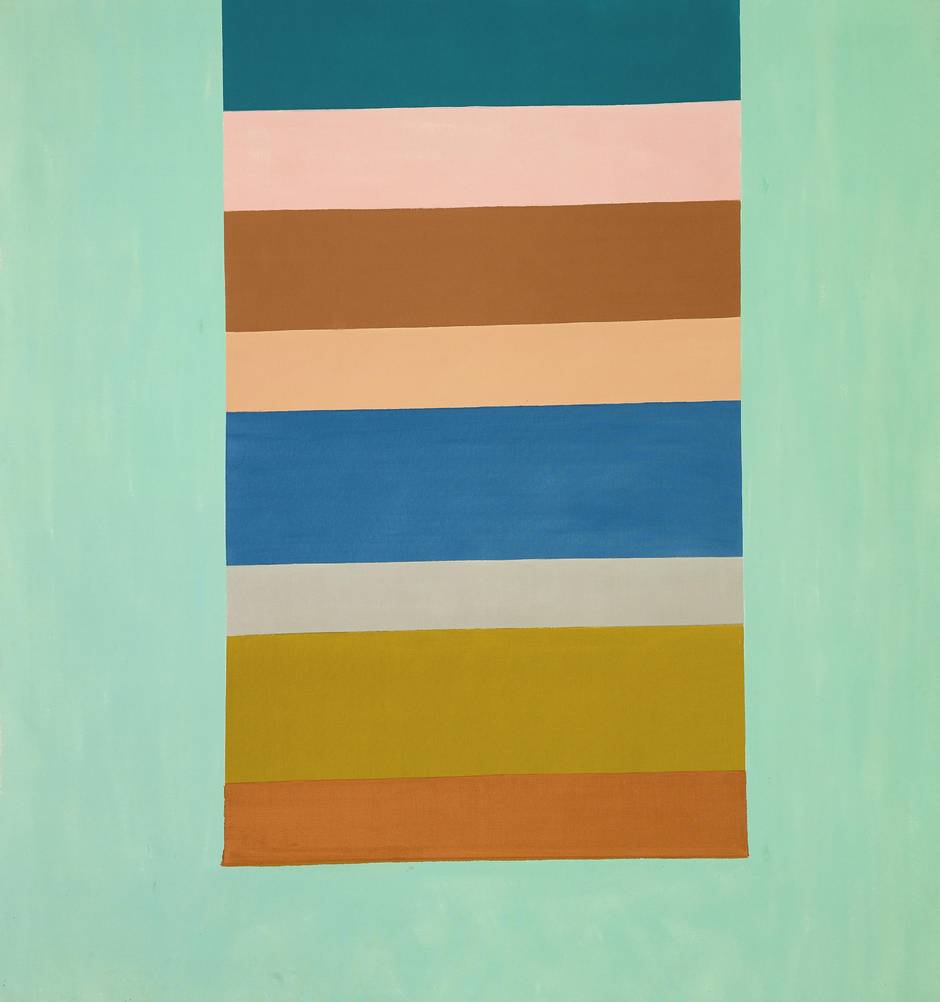 The 20 Bushes at the McMichael, touted as the first solo show of his abstractions in a major Toronto-area public gallery since 1976, stand as the most optically engaging works of the three exhibitions. How could it be otherwise? Colour and its excitements and enticements were Bush’s business. The most complex conceptually of the trio, though, is Heslin’s Needles and Pins.

(Iterations of Needles and Pins and Bush’s In Studio were presented together earlier this year at Calgary’s Esker Foundation Gallery. In Studio is curated by Stanners who, in 2014-15, co-curated the acclaimed Bush retrospective at the National Gallery in Ottawa while the Heslin is helmed by Esker director Naomi Potter.)

Though the winner in 2013 of the RBC Canadian Painting Competition, Heslin, 40, is not actually a painter in the Bushian or Thomson mode. Instead of applying paint directly to a primed or unprimed canvas, her method is to hand-dye batches of discarded linen and cotton, cut these batches into various shapes, then sew the shapes together and stretch them over a frame. 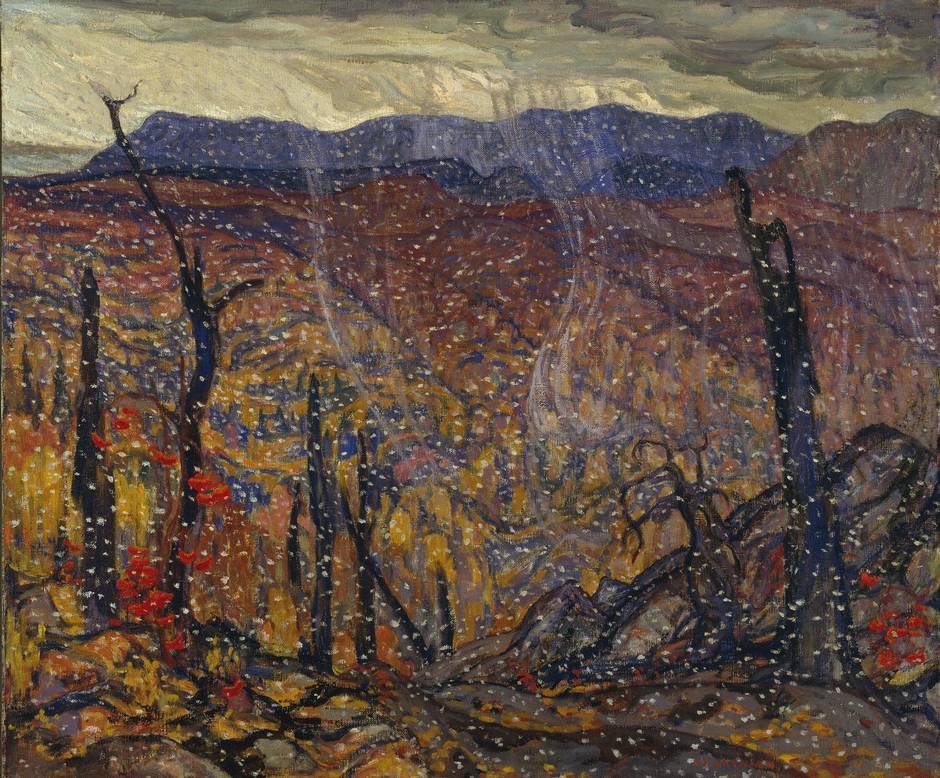 The results are at once familiar and ambiguous. From a distance a Heslin can look, variously, like one of Matisse’s paper cut-outs from the 1950s, a Ludwig Sander oil panel, a riff on a Bush composition (check out Earth Be Earth from 2015), even a manipulated aerial view of farm acreages. But up close, it’s the precision of the stitching you notice, the tension between support and surface, flatness and texture. Quilt then? A crafty exercise in trompe l’oeil? The domestication or “feminization” of Colour Field machismo? The mind tries on each of these interpretations (and others) without really settling on one.

In the meantime, the McMichael plans to entertain more such conversations as it enters its next half-century. Opening next February, for instance, is Higher States, a seven-month exhibition devoted to Lawren Harris’s time in the United States (1934-1940) and his attempt to manifest spiritual truths and cosmic yearnings in still-controversial paintings decidedly more abstract than those from his Group heyday. However, curators Roald Nasgaard and Gwendolyn Owens won’t be looking at Harris in lofty isolation. They plan to include works by such American contemporaries and acquaintances as Arthur Dove, Marsden Hartley, Raymond Jonson and Georgia O’Keeffe, among others. In effect, it will continue the effort to position Harris more firmly as a North American painter that celebrity Harris collector Steve Martin and Art Gallery of Ontario curator Andrew Hunter undertook with the Idea of North show now up at the AGO. 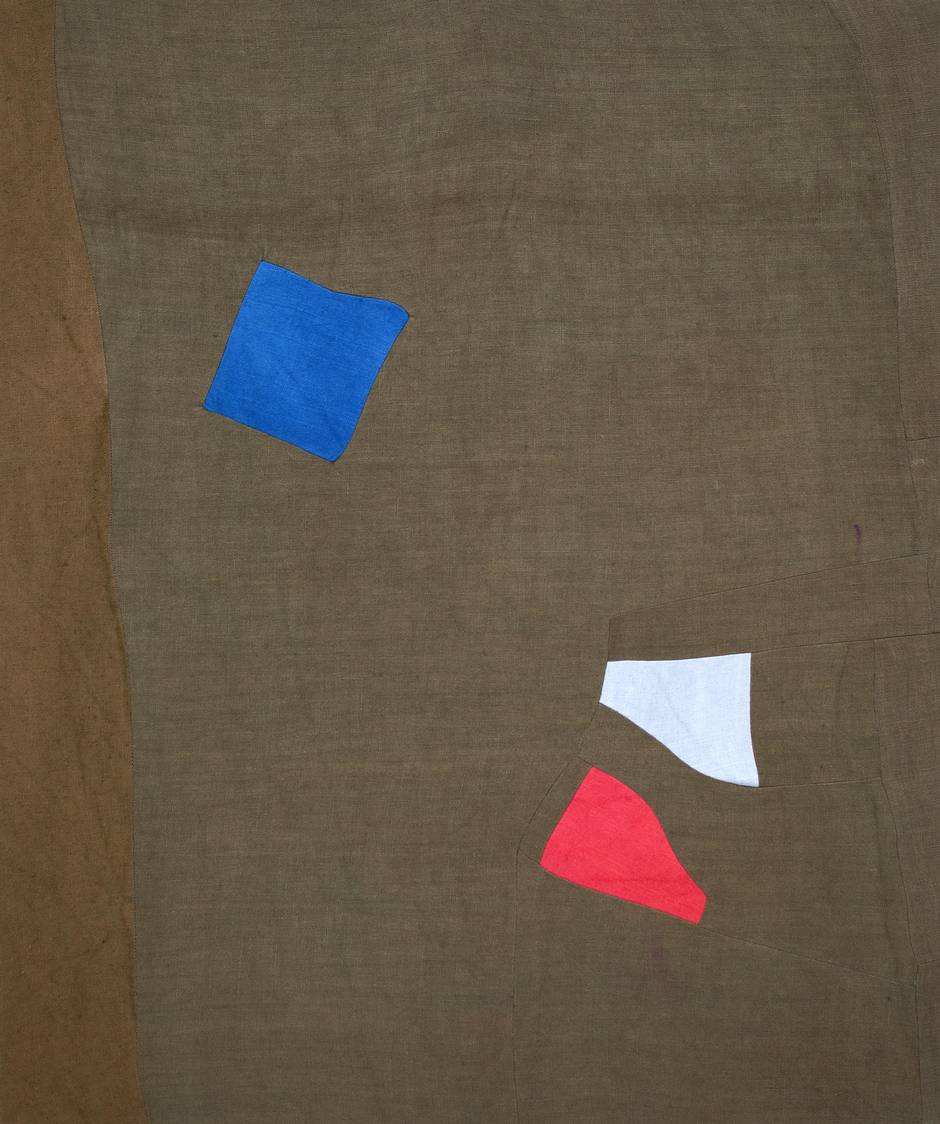 Another initiative the McMichael will be entertaining under its new director is either a reconfiguration of or addition to its temporary gallery spaces. The last significant overhaul of its main physical plant was completed just over 33 years ago. Its inadequacy for contemporary art display, particularly its temporary show spaces, is highlighted by the three current contiguous exhibitions and the 80-plus artifacts displayed therein. These spaces often have felt like an alimentary canal of low-ceilinged corridors opening into rooms that, while more amply proportioned, are experienced more as glorified parlours or vestibules than full-fledged galleries. This sense of constriction is most pronounced in the Bush exhibition where his frequently (very) large paintings – some are as much as 400 centimetres wide, others as deep as 200 centimetres – just don’t have the room to vibrate and respire.

Contemporary art, whatever the medium or idiom, tends to be big art. If the McMichael wants to have more conversations between its holdings – they now number around 6,000 – and the contemporary world, it’s going to have to think bigger.

Editor’s note: An earlier version of this article incorrectly said that Colleen Heslin won the 2009 RBC Canadian Painting Competition. In fact, she won the 2013 edition. Additionally, the article incorrectly stated that the Jack Bush paintings can be 400 metres wide and 200 metres deep. In fact, they are 400 cm wide and 200 cm deep. Also, an earlier version of this article included an incorrect name for Esker director Naomi Potter. This digital version has been corrected.