For many years, the art collective BGL – short for Jasmin Bilodeau, Sébastien Giguère and Nicolas Laverdière – was better known in its home province of Quebec than elsewhere in Canada. But this benign neglect gradually lifted and now the trio, who joined artistic forces in the mid-1990s while students at Laval University in Quebec City, seem on the cusp of major national, maybe even international, recognition.

The primary reason is BGL’s selection, announced last January by the National Gallery of Canada, as the country’s official representative at the 2015 Venice Biennale, the most important, prestigious and longest-running visual arts whoop-up in the world. Other upcoming projects are also likely to draw considerable attention to BGL.

The Venice fete is still more than six months away. But Bilodeau, 41, and Giguère and Laverdière, both 42, are hard at work on plans to turn the difficult footprint of the 56-year-old Canadian pavilion into a showcase for their trademark mélange of conceptual whimsy, quirky juxtapositions (anyone for a taxidermied moose racked to the top of an Audi Quattro?) and mixed-media wit. 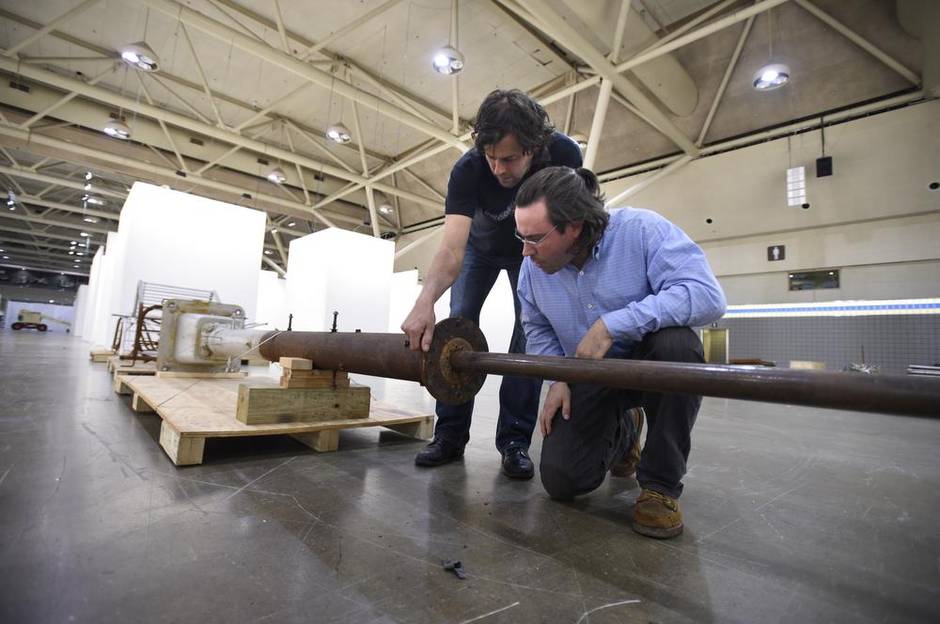 Sébastien Giguère and Jasmin Bilodeau of BGL at the installation of Canada de fantaisie/Canada Fancy for the Toronto International Art Fair. Fred Lum/The Globe and Mail

While details of the site-specific work, tentatively titled Canadassimo, are still sketchy, and likely will stay that way until the pavilion opens in early May, curator Marie Fraser promises a total transformation at the hands of these avant-garde pranksters.

In the meantime, you don’t have to wait until the biennale to experience BGL. For this weekend’s Art Toronto event, the trio has erected Canada de fantaisie/Canada Fancy, a large indoor installation made of metal fences and crowd barricades affixed to a light pole. Part sculpture and, with four metal seats, part functioning mechanical carousel, Canada Fancy had its world premiere in spring, 2012, as part of the now-famous Oh, Canada survey at the Massachusetts Museum of Contemporary Art. Although BGL has produced other mobile sculptures, including one for Calgary’s 2012 Nuit Blanche, the presence of Canada Fancy at Art Toronto marks the work’s first exhibition in Canada. 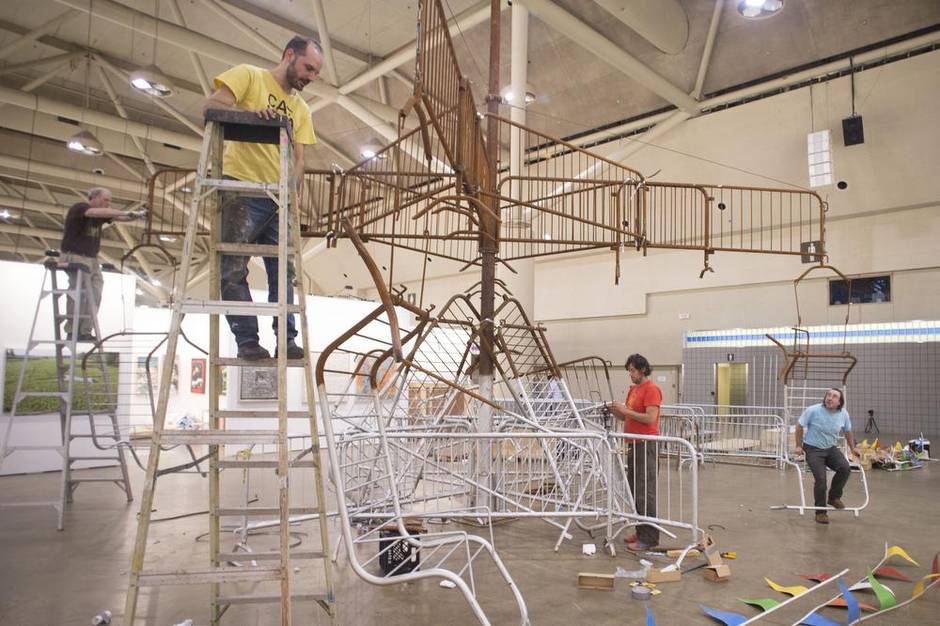 BGL's Nicolas Laverdière, left, Giguère and Bilodeau work on the installation. Chris Young for The Globe and Mail

At once impressive and fun (although Laverdière characterizes the ride as “smooth and boring”), the piece’s appearance this weekend is also a bit of a gambit on the part of the National Gallery, Art Toronto and installation sponsor RBC Wealth Management. As Laverdière acknowledged: “The people in Ottawa felt that the rich people in Toronto didn’t know BGL so they said, ‘It’s a good event to make BGL better known to those people who could help you go to Venice.’ ”

To create, install and maintain an exhibit for the six-month Venice Biennale is expensive – as much as $1.5-million, with the laureate artists expected to participate in the fundraising. (As well, the National Gallery and others are keen to raise money to improve the Canadian pavilion for future biennales.)

Given their years together, the BGL principals have developed what Bilodeau called “an organic way of working. Sometimes Sébastien will have a good idea and we misunderstand him and we’ll discover another idea. Then we’ll say, ‘Let’s try a drawing,’ and then we draw. Then we say, ‘Okay, wow!’ And sometimes that may be it. Or we go off in another direction. The beginning, the end, they’re not the same idea.” 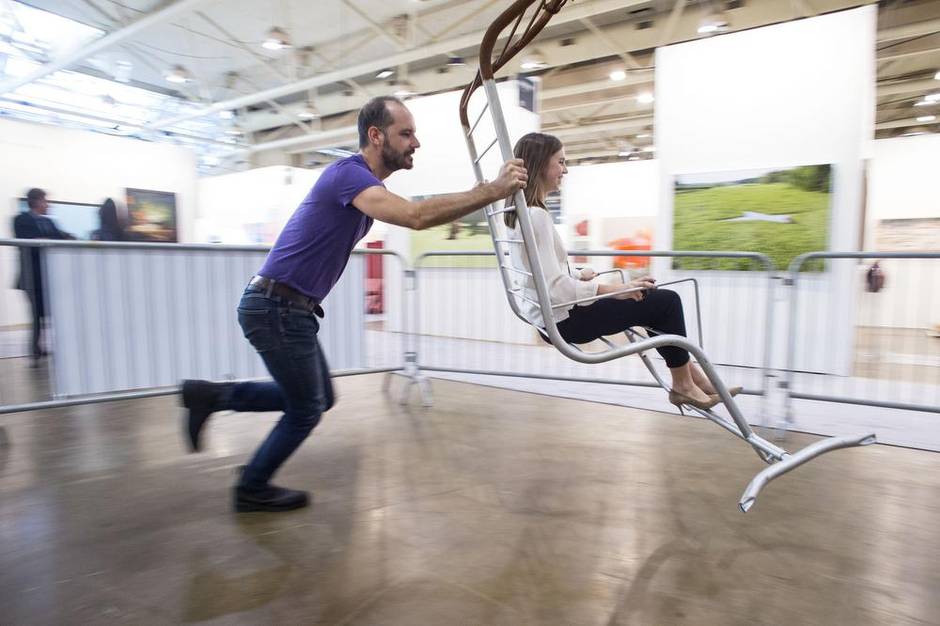 “And,” chimed Laverdière, “while we’re doing it, usually we pray that things happen.”

“Really, it’s like when you cook your omelette,” Bilodeau agreed. “You realize you can add cheese and that makes the omelette better.”

Besides taking over the Venice pavilion, BGL has two other “omelettes” on its 2015 menu. One is a gigantic Ferris wheel it’s erecting in a park in the borough of Montréal-Nord. A $1.1-million project, La Vélocité des lieux, will have five specially made subway cars attached to the wheel’s rim, rather than the usual passenger cars or gondolas. The other project, an 11-metre tall kinetic sculpture, called Water Velocity, is to be installed at the University of Toronto Scarborough campus. Described as “a twisted representation of swimming lanes,” Water Velocity will be placed near the main entrance of the Pan Am Sports Centre, host venue for much of the Pan Am and Parapan American Games scheduled for next summer. 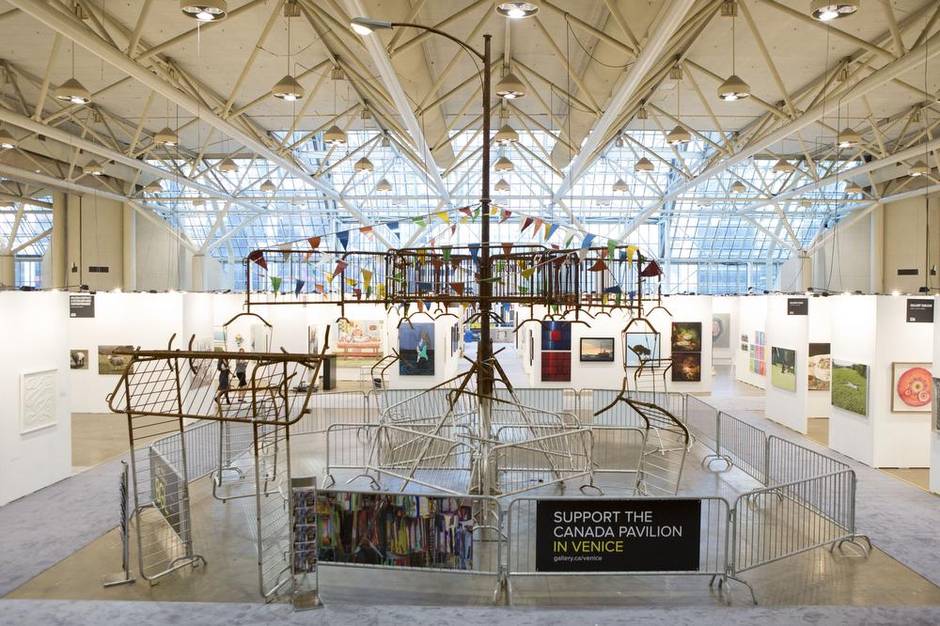 Canada de fantaisie/Canada Fancy is at Art Toronto 2014 in the Metro Toronto Convention Centre Saturday from noon to 8 p.m.; Sunday and Monday, noon to 6 p.m.