Painter Edmund Alleyn was a Quebec anglophone who spent four years in the late 1940s at French Jesuit schools, including the formidable Collège Jean-de-Brébeuf in Montreal. Before exiting his teens, he was well-versed in the social and religious orthodoxy that reigned supreme during the period Quebeckers know as the Great Darkness.

He had trouble with orthodoxies forever after, dissenting at the start of his career from the urge felt by other Quebec artists to free themselves by subscribing to movements and manifestos. “I couldn’t understand how one could, at the outset of one’s life work, establish what its foremost concern should be,” he later wrote.

Alleyn made art for half a century, and seems never to have reached any final conclusions about his foremost concern, other than to remain open to whatever appeared on his canvas. The title of his major posthumous retrospective at the Musée d’art contemporain de Montréal sums up his attitude: In my studio, I am many.

He was an equally sensitive barometer of the fractured and media-saturated society that Quebec became after the Quiet Revolution. His life and work pose a kind of critical counterpoint to the province’s delayed and accelerated experience of modernity.

His first work to draw attention was a prank: a “fake” Automatiste painting submitted for an exhibition to Paul-Émile Borduas and accepted by him as legit. It happens in the best families, No. 1 was a blatant dig at the idea of getting with any prescribed program for modern art.

Alleyn followed Borduas’s lead in another way, quitting Quebec in 1955 for the apparently freer atmosphere of France, where he lived for the next 15 years. By the early 1960s, he had abandoned pure abstraction and become a socially engaged artist who used Pop Art, schematic figurations and non-functional gizmos to claw at received systems of ideas. 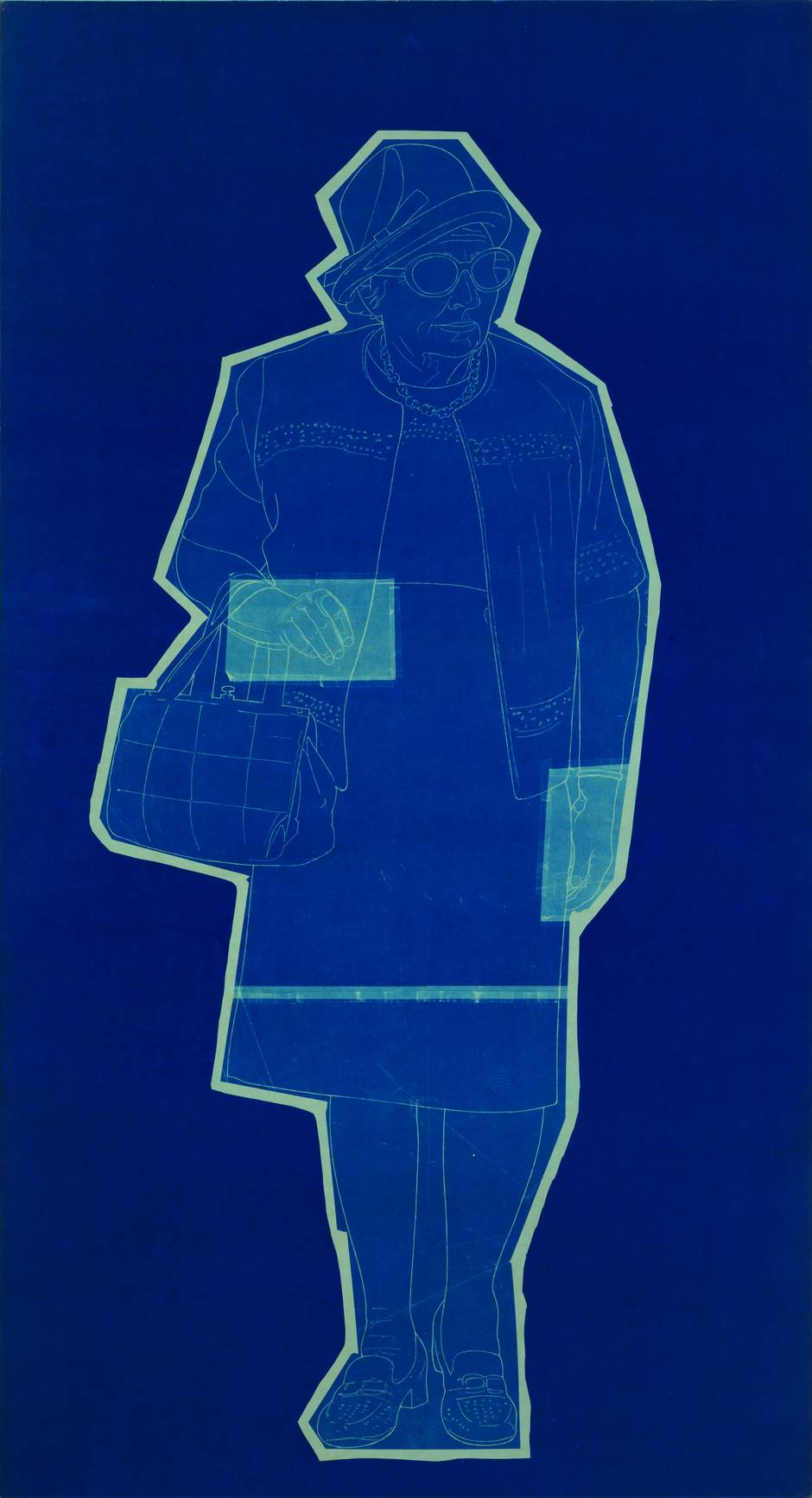 He embraced Marshall McLuhan’s notion of electronic media as an immersive environment that never delivers content without also moulding the recipients. The apex of this phase of Alleyn’s work was Introscaphe (1970), a large egg-shaped capsule in which the solitary user would be bombarded with visual and sensory information. The first content for this machine, which was intended for mass production, was an agitprop film collage that included images from the Vietnam War and conflicts over civil rights.

The next year, Alleyn returned to Quebec, by then much changed by social reforms and suffering a hangover after the high of Expo 67. He got a teaching job and fell into a creative slump, which he relieved by taking photos of people at the amusement park left over from Expo. As Vincent Bonin notes in the MAC exhibition catalogue, these candid snapshots “generally capture a moment of mild boredom when visitors to La Ronde [are] casting about for the next ‘attraction.’” 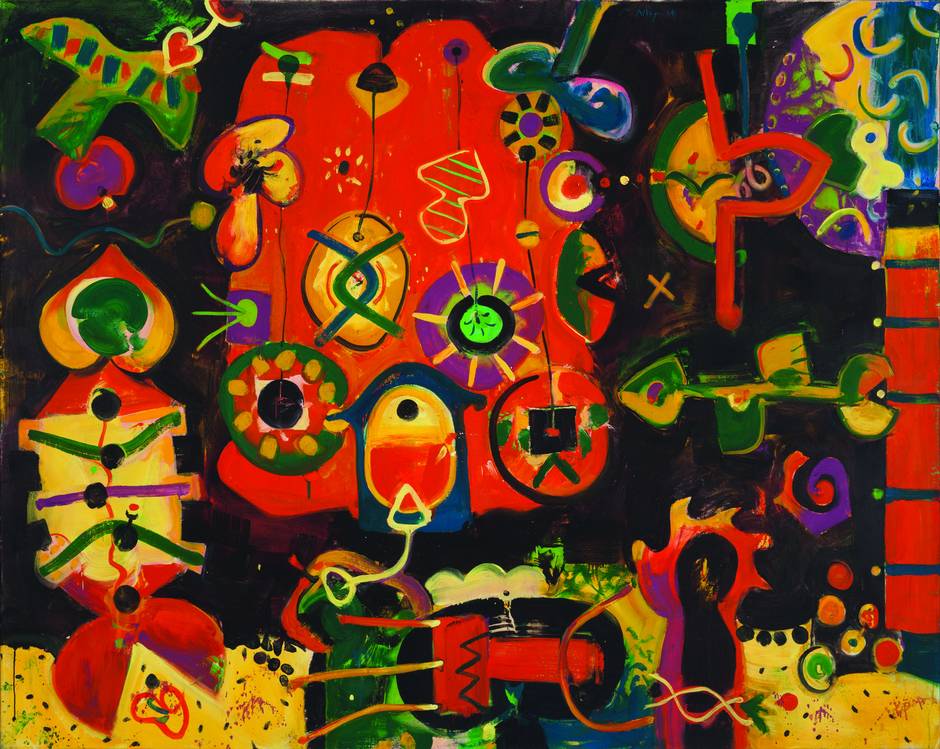 Alleyn painted life-sized simplified images of these photos on Plexiglas, then positioned them in front of kitsch paintings of sunsets and palm trees. La Ronde’s low-intensity thrill-seekers became emblematic of the entertainment society, in which the need for diversion is incessant and often banal. Was this the outcome of the Quiet Revolution: a pacified “petit peuple” united only in the pursuit of consumerist pleasures?

But the distraction depicted in Suite québécoise, as some of these works were called, also shared something with Alleyn’s own artistic process, which he had found vexingly scattered. “It took me a long time to accept discontinuity of thought and action as something other than mere confusion,” he said. Discontinuity and fragmentation, he finally realized, were the condition of life in a media-saturated society. 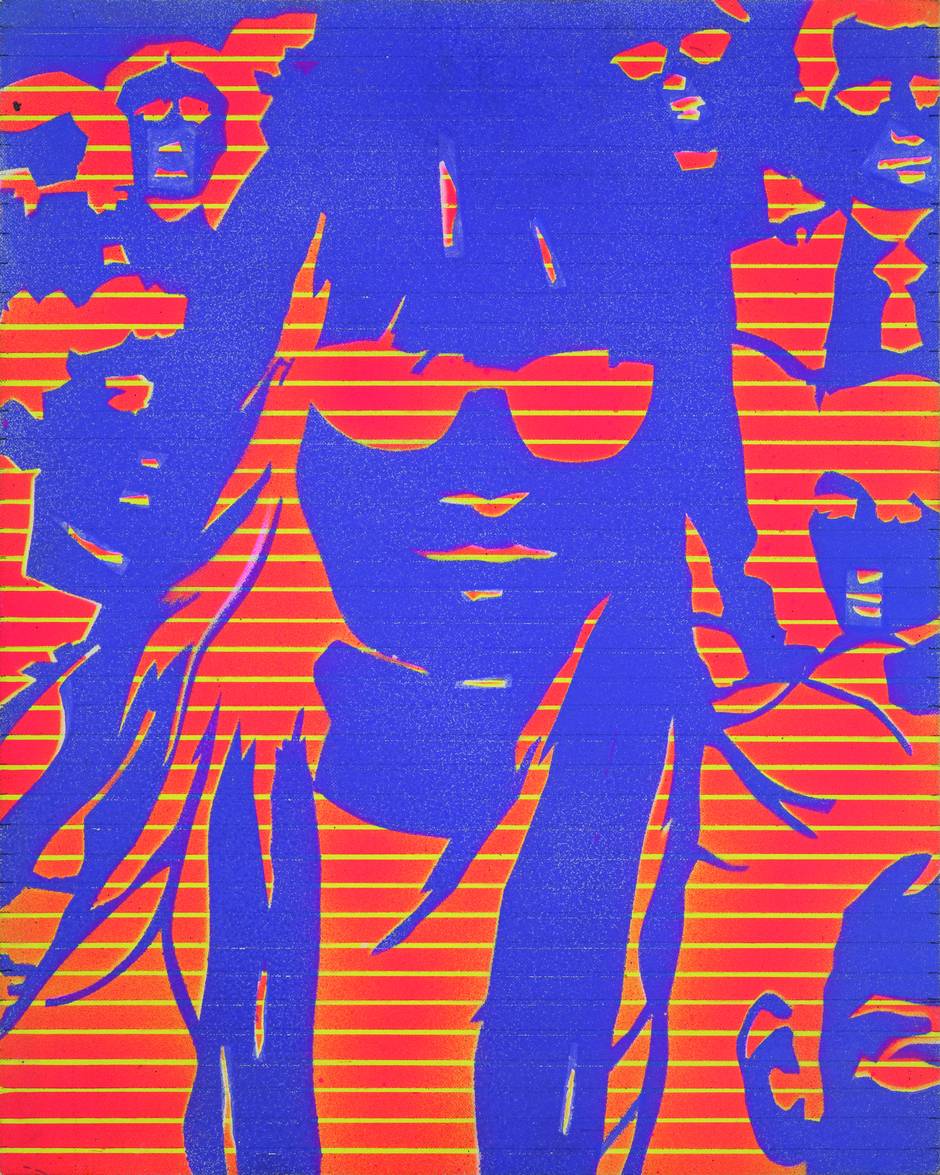 Portraiture as a pursuit of simplified types also became a route back into abstraction, seen most vividly in Alleyn’s Blue Prints series from the late 1970s. Here, figures from the La Ronde snaps became life-sized, white line drawings on a blue ground, as in an architect’s blueprint. Alleyn encased each cyanotyped figure inside a crude white border, as if each had been cut from a magazine and taped on the wall. Portraiture became fused with pattern and mass production, seen as a process that transforms society as much as it does the raw materials.

In the late-1970s, Alleyn began working at a summer cottage he had bought in the Eastern Townships, making paintings of idle boats and other views from his dock. The backgrounds were black, and other colours were limited to one or two bold pigments. The work looks nocturnal and airless, more like “fragments of a mental landscape,” as he said, than attempts to capture a scene. Alleyn announced that he was done with “questioning society and the way it operates,” though he was right in tune with the growing social obsession for puzzling over one’s own inner states. 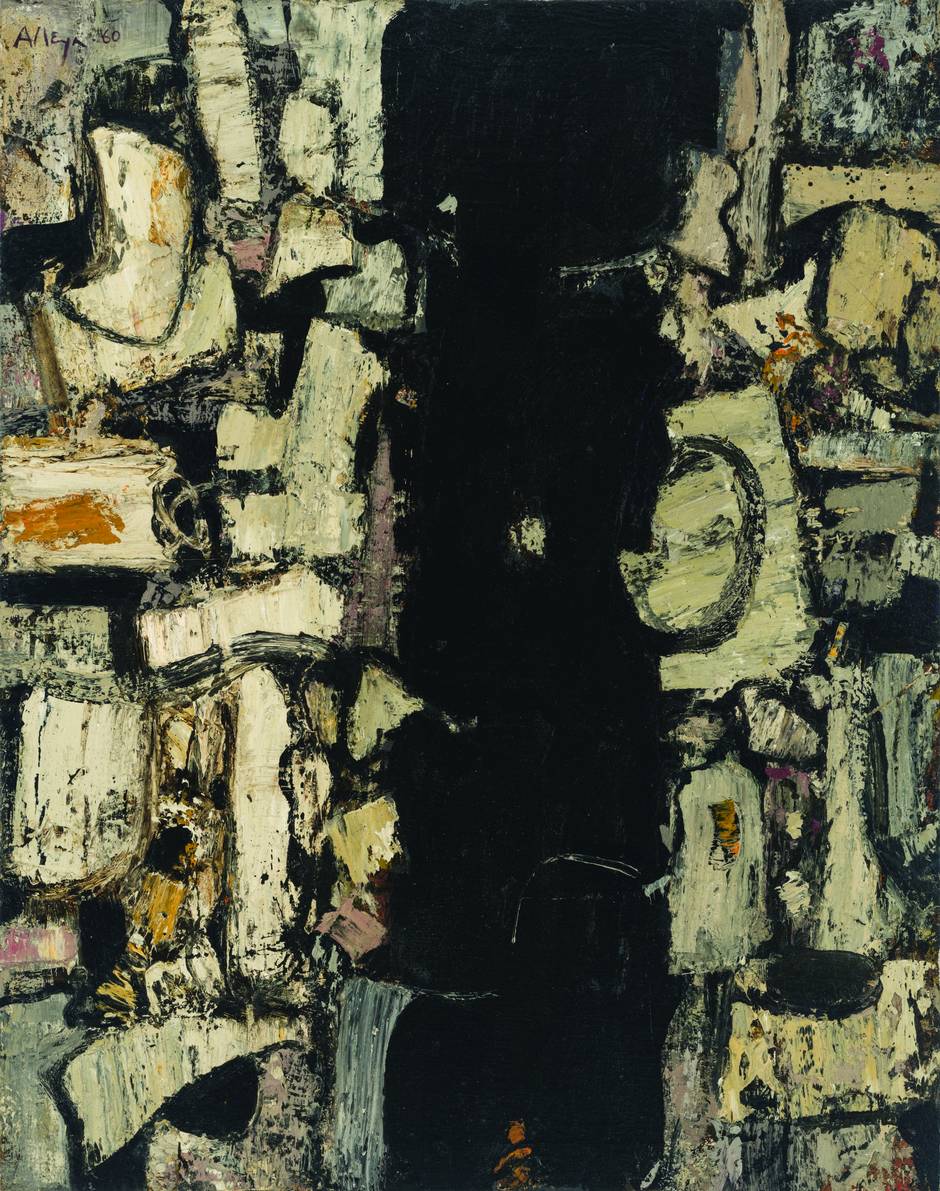 Those paintings marked a slow bleeding out of colour from Alleyn’s palette, which through the 1990s settled down to greyscale. At the same time, gravity disappeared from his paintings, in which diverse objects, some drawn as virtual cartoons, began floating in chaotic space. He was much affected by the slow-motion explosion sequences at the end of Antonioni’s film Zabriskie Point, which he called “among the most entrancing images in all of film.” The explosion was the final extinction of context, the total enactment of discontinuity. It was also, perhaps, a symbol of the end of the modernist obligation to push on to the next logical frontier.

In that sense, too, he saw what was in store for Quebec: not a unified march toward what old-time nationalists and federalists used to call destiny, but a distracted, expedient fumbling with expiring symbols and mythologies.

Dans mon atelier, je suis plusieurs (In my studio, I am many) continues at Montreal’s Musée d’art contemporain through Sept. 25 (macm.org).