Alfred Barr was just 27 years old when he became the first director of New York's Museum of Modern Art in 1929. One of his first acts was to appoint as his director of design and architecture a Harvard philosophy undergrad who had no formal training in architecture or design.

That undergrad was Philip Johnson, who would eventually become a renowned designer of buildings and other things. A key attraction for Barr at that point was that the energetic Johnson shared his passion for the new design philosophy emanating from the Bauhaus school in Germany.

In 1929, museums were still relatively passive institutions, gathering and presenting work without any conspicuous partisan agenda. Barr and Johnson were activists, who gave MoMA's adventures in design and architecture – still novel fields for a fine-art museum – a sharp polemical edge. They promoted the sparse aesthetic and all-encompassing approach of the Bauhaus, and denigrated nearly everything else. Their goal was to convince everyone in America to take the same view.

The modern style, Johnson said, had "two cardinal principles: utility and simplicity." Anything that offended these principles, even a little, struggled under "the burden of ornament." Barr, confronted by an art-deco sideboard or streamlined toaster, saw only "horribly deformed objects."

These flinty judgments are sprinkled throughout the hefty catalogue for the Montreal Museum of Fine Arts's new exhibition, Partners in Design: Alfred H. Barr Jr. and Philip Johnson. The show demonstrates how the pair's drive and flair for promotion helped spread what curator David A. Hanks calls "the gospel of modern design."

The show gives special and unusual attention to the apartments the two lived in, on neighbouring floors of a building on Manhattan's East Side. Barr and Johnson, we are repeatedly told, "experimented" with modern design in their own austere digs. The wealthy Johnson's experiment consisted of hiring Mies van der Rohe to design his flat, then closely following the master's instructions for use. A lived-in look was not permitted. When a visitor dared to leave a handbag on one of Johnson's chairs, Barr's wife Marga informed her that "one does not leave extraneous objects lying around … The interior is a still life."

The Barrs, who lived on Alfred's salary, had to scrounge for domestic knock-offs of German furniture priced beyond their reach. Amusingly, Hanks's research discovered that a Marcel Breuer-inspired table and chair set the Barrs used for decades was actually the work of Donald Deskey, the man behind the "horribly deformed" deco interiors at Radio City Music Hall.

These and other pieces from the Barr home were donated by their daughter in 1988 to the Montreal Museum of Decorative Arts, which became part of the MMFA in 2000. Some of Johnson's furnishings are on view also, along with a 3-D-simulating video tour of his apartment. Johnson justified the expense of hiring Mies to his mother by saying it was "the cheapest possible publicity for my style."

But few tastemakers actually saw the place, and one of the only publications to write about it at the time was the newsletter of Johnson's old prep school.

No matter: MoMA's "'missionary' responsibility," as Barr called it, was better served by a series of shows that travelled widely and set the modern standard for touring exhibitions in the United States. The museum's Modern Architecture: International Exhibition (1932) toured for several years, as did Machine Art (1934), Barr's and Johnson's most far-out statement of how wide a contemporary-art museum's reach should be. Exhibits included kitchen utensils, a cash register and a ball bearing, which also appeared on the poster.

Hanks and his fellow catalogue essayists don't speculate on whether Barr's missionary bent owed anything to his father's career as a Presbyterian minister. Nor do they probe very far into Johnson's capacity for fervent dogmatism. While he was being "intoxicated" by the Bauhaus during German travels in 1930, he also picked up the scent of another exciting German revolution. At Potsdam in 1932, he attended a Nazi rally and became an ardent fascist.

Johnson was already tight with Mies by that point, and a year later the architect was recommending his young acolyte as the Bauhaus's "American representative." It's not known whether Mies realized that Johnson was also an unofficial American rep for the new Nazi government, which soon closed the Bauhaus and sent its faculty fleeing for cover.

All this and more is detailed in the April edition of Vanity Fair, in an excerpt from Marc Wortman's forthcoming book, 1941: Fighting the Shadow War. The MMFA show makes as little as possible of Johnson's political conversion. The only mention in the show proper appears fleetingly in a video, as a few easily overlooked lines of white script on a pale blue background. "Philip Johnson was seduced by the visual excitement of Nazi propaganda," we're told. The sexual reference is as telling as the notion that Johnson's aesthetic sense could overwhelm his reason for the better part of a decade.

A more inquisitive show might have asked whether this useful idiot, who received a Nazi tour of the Polish front in 1939, may have intuited that radical prescriptive architecture and radical prescriptive politics vibrated to a similar intolerant frequency. In any case, Johnson left MoMA for several years, to dress his right-wing homies in grey shirts and design a platform for the American fascist Father Coughlin, modelled on Hitler's platform at Nuremburg. We can assume that the structure had no "burden of ornament." Johnson also helped some Bauhaus refugees, while still failing to connect their plight with his politics.

Partners in Design is handsomely laid out, with vintage modern designs arrayed on white rectilinear islands. The 3-D visuals are pretty cool, as is an interactive video display of two influential maquettes by Mies and Le Corbusier. But there's nothing newfangled about this show's point of view. The triumphalist tone could have been struck by any similar show or discussion in the 1970s.

There's no attempt to analyze Barr's and Johnson's missionary program as the frankly colonial adventure that it was. MoMA's hugely influential 1932 publication The International Style "left no doubt that America was to look to Europe," writes former MoMA chief curator Barry Bergdoll, but he doesn't inquire into the intellectual climate that made such an outlook seem necessary. American architects didn't fare well in The International Style; Frank Lloyd Wright was omitted entirely. And while Johnson and Barr promoted the idea of an international style, the fount of all truth was definitely German. Art Deco was not only seen as a deforming influence, Hanks writes, it was also "disdained by the MoMA circle as an imported French style."

There's also no consideration of what other effects may have been triggered by MoMA's scorn for the ornamental and the non-utilitarian. The show includes a flyer for a 1949 modern-living exhibition at the Detroit Institute of Arts, with a cover cartoon by Saul Steinberg of a man reading his paper in a modern chair, with his feet propped on an ornate throne. The message is clear: Simple new things are cool, complex old things are rubbish.

The large-scale execution of this idea took place all over North America during the 1960s and 1970s, as beautiful old buildings were wrecked to make way for towers of glass and concrete. If Barr and Johnson were as successful at proselytizing as this show claims, they should also own some of the responsibility for demonizing the non-modern. These cheerleaders for the Bauhaus invasion of North America were also among the gravediggers for much in our inherited cityscapes.

Partners in Design, a project of the Liliane and David M. Stewart Program for Modern Design and the MMFA, continues in Montreal through Aug. 21 (mbam.qc.ca/en).

Lawren Harris’s Algoma goes up for bidding at a live sale Tuesday
May 27, 2016 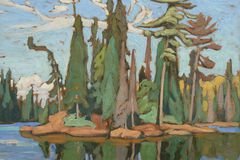 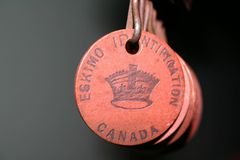 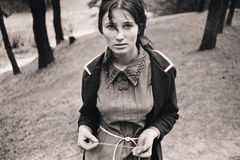