It was the Seventies. The pop-art bubble had burst, but not without scattering wind-borne spores of Dadaist irony throughout the international art world. Some of those spores took hold in the conceptual-art movement, which came next, and nowhere more surprisingly than in Vancouver, where the exhibition Traffic opens today. A marvellously comprehensive and fine-grained show organized collaboratively by Barbara Fischer (Justina M. Barnicke Gallery), Catherine Crowston (Art Gallery of Alberta) and a host of others, Traffic documents conceptual-art activity across the country, recording a moment when painting and sculpture gave way to performance, video, mail art and a range of ephemeral media, and when Canadian artists were transmitting as much they were receiving groundbreaking ideas about art.

Vancouver had a special role in all this. This was where American curator Lucy Lippard's landmark 1970 exhibition 955,000 was staged, in which local greenlings Jeff Wall, N.E.Thing Co. and Christos Dikeakos were shown alongside Dan Graham and John Baldessari. This is where Robert Smithson strove to create his island of shattered glass. (Environmentalists eventually shut him down.) This is where the Western Front artist-run centre served as a crash pad for international Fluxus émigrés such as French artist Robert Filliou, with periodic drop-ins from the Toronto art collective General Idea.

And this was where, in 1974, Vancouver artist Vincent Trasov ran for mayor in his peanut persona, snagging 2,685 votes in an absurdist tour de farce.

Mr. Peanut had a life before politics, first appearing in New York in 1969, and later in Halifax, Toronto and Los Angeles before making his big hometown splash. Sporting the top hat, spats and cane borrowed from the Planters Peanut logo, he had a penchant for tap dancing in public places, and what better signifier of the artist than a lowly legume with flâneur tendencies?

When I spoke to him this week, Trasov said that Mr. Peanut's swerve into the political arena coincided with a potent moment in public life. "Richard Nixon had resigned to avoid impeachment," he recalls, "and his main handler had the same name as my friend John Mitchell, who had offered to be my spokesperson. It just seemed like the right thing to do." Trasov-as-Peanut officially registered to be on the election roster, roving the city in search of photo-ops, getting himself in front of myriad news cameras, and landing the cover of the inaugural issue of General Idea's FILE magazine (a spoof on LIFE). Trasov's 1975 video, My Five Years in a Nutshell, tells the tale, as does his artist book, The Rise and Fall of the Peanut Party: 20 Days in November, on view at the VAG.

Despite the pleasures of celebrity, though, the role did have its challenges. "I never really knew how to tap dance," Trasov confesses, "but there were a few songs, like Pennies from Heaven, that seemed to just work. I would sort of stand on one leg and tap with the other. You can fake it a bit when you have a big costume." Food for thought for the Mr. Romney campaign?

Traffic: Conceptual Art in Canada, 1965 to 1980 continues at the Vancouver Art Gallery until Jan. 20. A concurrent exhibition of conceptual art entitled State of Mind: New California Art Circa 1970, at the Morris and Helen Belkin Art Gallery at the University of British Columbia, runs until Dec. 9. 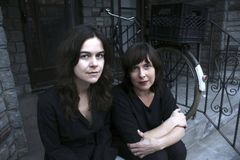 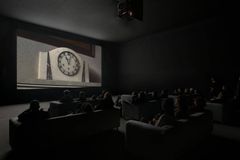 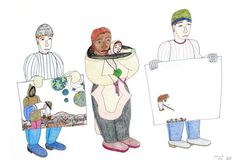