There is no word for good-bye in Nisga'a, an elder explains outside one of the events surrounding the Special Assembly of the Nisga'a Nation taking place here last week. Instead what you say when you depart translates to "we'll cross paths some time."

And so it has been for some of the Nisga'a treasures. Taken from the Nass Valley in the late 19th and early 20th centuries, they were destroyed by missionaries, or scattered to collectors and museums around the world.

The Nisga'a Museum, also known as Hli Goothl Wilp-Adokshl Nisga'a (the Heart of Nisga'a House Crests), opened three years ago, on May 11, 2011. According to the president of the Nisga'a Nation, who was there, the hereditary leadership were in tears as they gazed upon these long-lost treasures at the opening. "When they were brought back, it was like the spirit of our people was brought back," Mitchell Stevens says.

The building rises dramatically against the mountain backdrop in remote Laxgalts'ap.

"Even to this day, I'm still in wonderment that there's this facility in this place," says director Darren Martins, who arrived last year.

The museum's design is inspired by the longhouse and the traditional Nisga'a feast dish, a common bowl that feeds all. It serves as a metaphor for the Nass Valley, a sort of bowl rich with resources, surrounded by mountains. Shaped like the common bowl, the museum is a resource centre that feeds the Nisga'a.

Visitors – locals who want to learn about their culture, school groups, tourists who have come from as far away as Germany, Russia and New Zealand – learn the history of the Nisga'a and their stories.

The museum's permanent collection includes more than 300 artifacts and works of art. A totem pole, five storeys high and around which the museum was constructed, is front and centre inside the museum's huge windows. Inside, a house front piece featuring the important Nisga'a spirit Txeemsim transforming into the raven, is a stunner. Vibrant masks of supernatural beings greet you as you enter the Ancestors' Collection – or Anhooya'ahl Ga'angigatgum'. Touring through, there are headdresses, ceremonial rattles, soul catchers, intricate wooden puppets used in storytelling, a large carved work identified as the back piece of a chieftain's throne, as well as everyday items such as a baby's cradle.

"I had no idea that artifacts were taken from us," says Holly Maxwell, 28, an administrative assistant at the museum, who leads tours through the gallery. She has learned a great deal about her own people's history through this collection, touring through with family members. She points to a large spoon that was thought to be for everyday use. Her husband's grandfather revealed that it was actually used for grease-tasting in competitions.

Her eyes opened through this museum to the wrenching loss of these treasures, Ms. Maxwell prefers to focus on their return – and the future.

"You can't be stuck on thinking about things that way or we'll never move forward and that's what we need to be doing with these pieces. We need to be moving forward and teaching people why these artifacts were taken," she says.

"I [believe] everything happens for a reason, and my thought is if they didn't take these, we wouldn't have them here today." 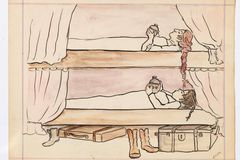