Stories about the Arctic usually revolve around a few familiar themes: climate change, threatened species, resource extraction. Only rarely, says Lola Sheppard, are people exposed to "the realities of inhabiting the north, the communities there, what the kind of spatial realities of living and moving about are."

She and her partner, Mason White, are hoping to help rectify this next year when they present Arctic Adaptations: Nunavut at 15, at the 14th Venice Biennale in Architecture. Tuesday in Ottawa, the Canada Council for the Arts and the Royal Architectural Institute of Canada named Lateral Office, the duo's Toronto-based architecture and design practice, as this country's flag-bearer at the Biennale, often touted as the most important architecture exhibition/competition in the world. Lateral Office was chosen from a field of 12 entrants.

Next year's Biennale, to be curated by international architecture superstar Rem Koolhaas, is expected to draw entries from dozens of countries, each exhibiting under the festival's overarching theme of Fundamentals – what Koolhaas calls "the inevitable elements of all architecture used by any architect anywhere, any time (the door, the floor, the ceiling)." Koolhaas also is keen to "uncover within globalization . . . unique national features [that] continue to exist and flourish even."

In an interview, White called Koolhaas's theme "fortuitous" and "a pretty powerful one for us since [with Arctic Adaptations] we're dealing with such a new territory [Nunavut was created in April 1999], a new government and such a youthful population [33 per cent of its 32,000 residents is 14 years and under. Average age: 25]." The theme's a fit, too, in that Inuit knowledge has been "so resourceful and intelligent" over the centuries in adapting to fundamentals, "extreme ones," of climate, geography, mobility.

The White/Sheppard presentation will be housed in the Canadian Pavilion in Venice's Giardini di Castello June 7 through Nov. 23, 2014. Diplomatically described by White as "a quirky and unique space," the rather small glass-and-wood pavilion was built in 1958, ostensibly in the spiral shape of a nautilus shell. It's Lateral Office's intention to recast the pavilion, often castigated as a "frustration" for artists, installers and curators, as a kind of "ice-floe landscape . . . to make it seem more spacious, to push things to the perimeter . . . to get a little more quietness in there" so as to create "a sense of coolness, atmospherically speaking, and the vastness of the actual landscape."

Lateral Office won't be going it alone, however. The five themes making up Arctic Adaptations - northern health, recreation, housing, education and arts - will each be explored and realized by a single design team, its members drawn from a specific school of architecture, a Canadian architect's office and a Nunavut-based organization. So, for instance, for the pavilion's presentation on northern housing, White and Sheppard are striking a collaboration among the Nunavut Housing Corp. in Iqaluit, Yellowknife's Pin/Taylor Architects and the University of British Columbia School of Architecture in Vancouver.

While Lateral Office was founded in 2003 – both White and Sheppard hold master's degrees in architecture from Harvard Graduate School of Design – it's only been in the last five or six years that it's pursued research and design work focused on the role of architecture in the northern climes. In 2007, for instance, the firm was a finalist in an international competition to redevelop the Reykjavik airport in Iceland. Three years later, a proposal for a high-speed rail-link between Russia and Alaska over the Bering Strait helped Lateral Office win the $50,000 Canada Council Professional Prix de Rome. In 2011, it proposed the creation, on Baffin Island, of a snow-mobile-accessible network of Arctic camps, freezers and small-scale farms, each hub spaced 160 km apart.

Noted White: "The Arctic seems to resist architecture's ability to operate in a very traditional manner," even as, as Sheppard remarked, "there has been this very long history of importing southern models of education, languages, food and architecture to the north. Part of what we've been interested in looking at is where, precisely, modern, maybe southern knowledge can meet and exchange with northern knowledge and form new modes of operating, particularly in architecture."

Traditional architecture hasn't entirely ignored Inuit design, she acknowledged, but "often it's been referenced from a purely iconographic standpoint so we make something that recalls an [Inuit] form, say, something in the shape of an igloo but it's not actually working with the logic or the organization of a traditional building form."

White and Sheppard have big ambitions for their pavilion project. Besides artifacts, architectural models and drawings, they'd like the pavilion to house "living architecture -- where we try to animate things like wind flows, snow accumulation, snow-mobile tracks, even species migration."

Of course, all this is going to cost: previous installations in the Canadian Pavilion have had budgets of $800,000 to $1-million. And while being your country's representative at an influential international showcase is unquestionably an honour, it's also onerous: the Canada Council is providing Lateral Office with only $184,000 to realize Arctic Adaptations, the remaining 80 per cent or so will have to come from in-kind and cash donations solicited by the architects.

The duo remains chipper about its prospects. "We work quite well when we have deadlines," White laughed. The Biennale, expected to draw more than 300,000 visitors, "is sort of the ultimate deadline," he observed. "It gives us an excuse to reach out to organizations, even architects we've wanted to do things with for a while."

Modern Inuit art: Beyond tradition - and the tourist shops
April 8, 2011 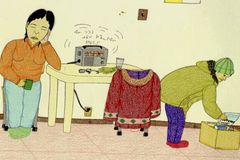 Building blocks to the Venice Biennale in Architecture
February 17, 2012 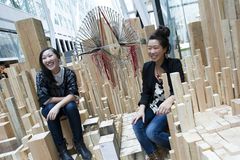