Tom Thomson's death at Canoe Lake in 1917 was the traumatic catalyst for the formation of the Group of Seven, and in Painting Canada – the touring show from Dulwich Picture Gallery, London, opening today at the McMichael Canadian Collection in Kleinburg – the artist is awarded appropriate pride of place. As the exhibition makes clear, Thomson was the warm-up act who played better than the band. His sketches, presented here in lavish numbers, are ravishing, particularly remarkable for their description of those liminal seasonal states like the one we are presently in. Leaves are down, skies are sodden grey, but the full clinch of the coming cold has yet to be felt.

Capturing this shift was challenging. Writing to his patron Dr. James MacCallum in October, 1914, Thomson confided: "[A.Y.] Jackson and myself have been making quite a few sketches lately and I will send a bunch down with [Arthur] Lismer when he goes back. He & [Frederick] Varley are greatly taken with the look of things here, just now the maples are about all stripped of leaves now but the birches are very rich in colour. We are all working away but the best I can do does not do the place much justice in the way of beauty."

Notwithstanding such protestations, Thomson's small oil sketches catch the melancholy fall mood perfectly, emanating a damp chill. As well, says Nancy Lang, co-producer with Peter Raymont of the recent documentary West Wind, the downed leaves made for wider vistas and sharper tonal distinctions. In one sketch from 1916, a solitary tree, denuded of its leaves, holds up its branches tinged with molten orange, suddenly stark against a plum-grey hillside. In another from the same year, leaves moulder by a turbulent stream, a painterly compost of greys and umbers beside the cold-rushing slate green. Auguring snow, a grey-blue storm cloud in a sketch from 1915 threatens from the skies like a billowing fist, menacing a landscape stripped of life – a drama of operatic force performed for an audience of one. Thomson's little painting is thus a gesture of farewell, a nod to the magnificence of the incoming winter that would soon necessitate the artist's return to city life.

Others have noted Thomson's pre-eminence. Writing about Thomson in 1914, the younger artist David Milne observed: "Varley and Lismer pines are pretty conventional pines, well done but quite familiar ... you admire their proficiency, that's all. But with Thomson's trees, it's different. You can't be indifferent. These few patches with knotted strings are powerful; there was strong emotion behind their making and they stir the same now." Milne notes, too, how Thomson transcended the Group's inclination toward decorative patterning – at least as we see it in their larger finished works. "A great point in Thomson's favour is this, his lack of perfection," Milne writes. "I am wary of craftsmanship. It is nothing in itself, neither emotion nor creation. I rather think it would have been wiser to have taken your 10 most prominent Canadians and sunk them in Canoe Lake – and saved Tom Thomson."

A harsh assessment to be sure, and certainly not one intended for the historical record, but one can see what Milne was after. Thomson brings the struggle to the viewer – here, as always, the hallmark of great modern art. 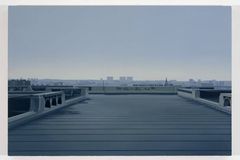 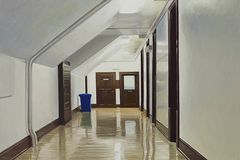 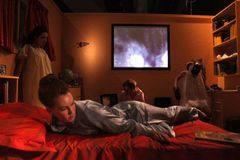