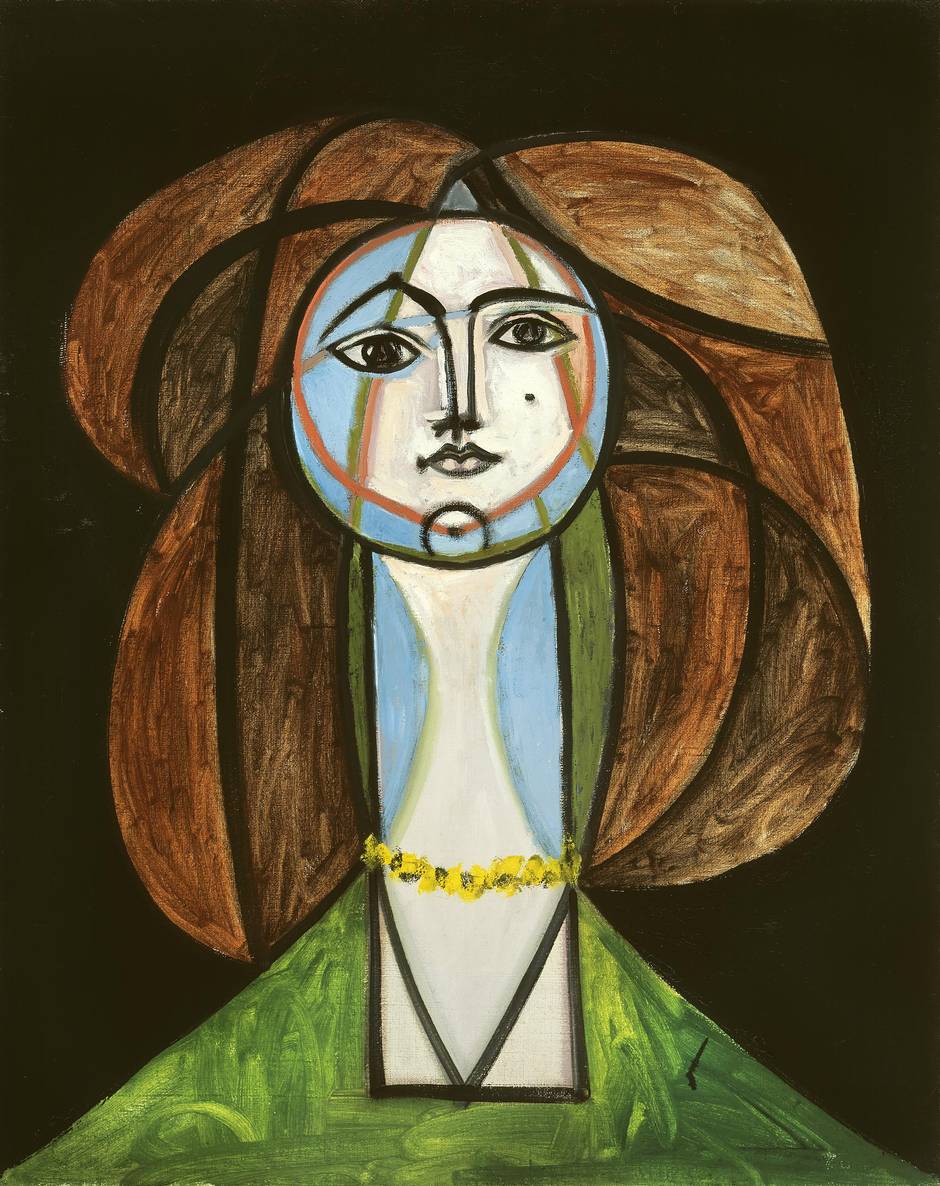 Femme au collier jaune, (Woman with a Yellow Necklace), 1946. This portrait of Françoise Gilot – the mother of two of Picasso’s children, shows her with a cigarette burn on her cheek – the result of an argument between the couple. (Picasso Estate/SODRAC)

Although excited to see the artwork, I felt somewhat uneasy walking into an exhibition about Picasso’s women. Picasso was notoriously cruel to his partners – a serial philanderer, a womanizer. He got older but his conquests did not. He was in his 70s when he met his second wife, who was in her 20s. He was also a fiery, jealous and even violent partner.

Consider Femme au collier jaune (Woman with a Yellow Necklace), 1946 – a portrait of one of his great loves, Françoise Gilot – mother of two of his children. In this colourful geometric oil, Gilot is depicted with a beauty mark on her cheek. But Gilot did not have a beauty mark. The blemish is in fact a cigarette burn – the result of an argument between the couple.

How is one to tour through an exhibit about Picasso’s romantic and artistic inspirations and reconcile the ugliness of the man’s behaviour with the beauty of his art?

But Picasso: The Artist and His Muses, which opened last week at the Vancouver Art Gallery, is not merely a celebration of Picasso’s reclining, weeping and other painted women; it is a celebration of the women themselves – and an examination of his work through that lens. These women weren’t simply models or even muses, this exhibition posits, but partners and collaborators whose influence on his work far surpassed that of just subjects.

Curator Katharina Beisiegel, who views these relationships as a sort of “creative osmosis,” has taken great care to give the women if not quite equal billing – the real stars of this show are, of course, Picasso’s paintings – then a large spotlight. Picasso’s art drives the show, but the six women who are considered his most prominent muses – major figures in his personal life and his art – were integral to its creation.

“I would be very happy if you take away from this exhibition that these women were truly part of the creative process,” Beisiegel told The Globe and Mail. “That their lives and what they experienced and their stories … mattered to the way that we see the paintings and the way they were painted.”

The exhibition is an enormous undertaking. With more than 60 works sourced from more than 35 international lenders, it’s been a six-year endeavour for Beisiegel (it’s not always easy to convince an institution or collector to part with their Picassos). It is divided into six sections, one for each of the women, each beginning with a large photograph of the woman and her story. 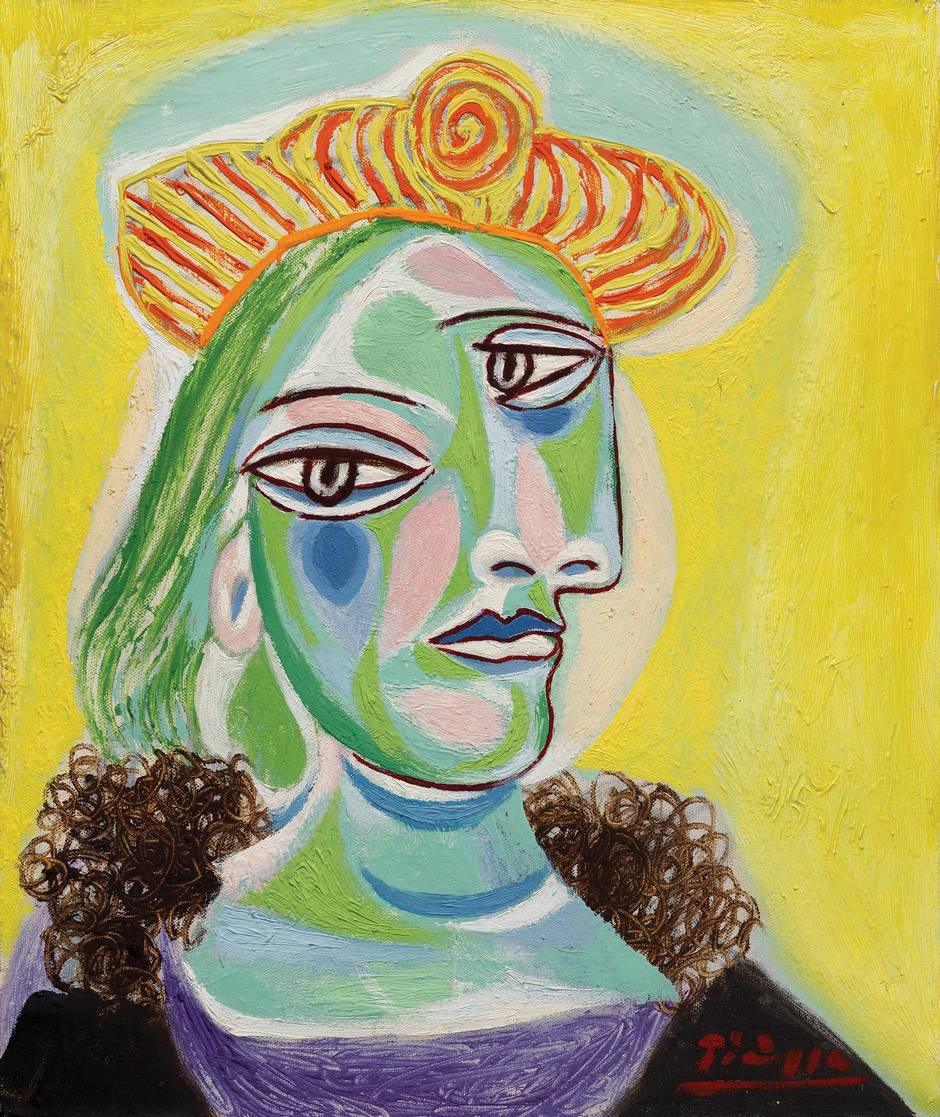 Bust of a Woman, 1938. This piece of Dora Maar is one of the highlights of the exhibition. Maar may be the best known of Picasso’s lovers, a Surrealist photographer who had an enormous impact on his work. (Picasso Estate/SODRAC)

“I wanted to shift the focus away from Picasso, this artist on a pedestal,” said Beisiegel, deputy director of Art Centre Basel. “There were these great women … who brought something to the creative process and who were so influential on his art. And that’s what I wanted to focus on. When you’re in an exhibition, of course you’re surrounded by his gaze on the female body, and I wanted to balance the male gaze that Picasso has by bringing these women in. That’s one of the reasons why we enlarged the photographs, to really have them as a presence in the exhibition. So that we don’t forget this is not just some rendition of a female body – this is a portrait of a woman, and of a very specific woman.”

The exhibition begins with Fernande Olivier (1881-1966), widely regarded as Picasso’s first great love. They met in Paris in 1904; both were very poor and living a bohemian life. Olivier had escaped an abusive marriage and was working as a model for artists.

Their relationship marked a major shift in Picasso’s work: from his melancholic Blue Period to his warmer, more cheerful Rose Period – as well as his dive into cubism. Olivier’s almond-shaped eyes are clearly visible in this exhibition in Woman Combing Her Hair, 1905, and Nude Standing in Profile, 1906, as well as his 1909 bronze, Head of a Woman (Fernande), considered one of the iconic cubist works.

Picasso grew successful during this period but the relationship crumbled under the weight of their mutual infidelities, the exhibition explains, and they separated in 1912.

The show’s second section examines Olga Khokhlova (1891-1955), a Russian ballet star whom Picasso met in Rome in 1917 and married the following year. This period marks a fascination with neoclassicism, with classicist and even sculptural elements injected into paintings of Khokhlova, including Head of a Woman (Olga), 1917, a small, realist oil on canvas that Picasso painted to make a good impression on Olga’s family; and Seated Nude, 1922 – with clearly visible Greco-Roman influences.

While Picasso was still with Khokhlova, with whom he had a son, he met Marie-Thérèse Walter (1909-1977) outside a Paris department store and was captivated by her beauty. She was 17. Thus began a long affair that was very fruitful for his art. The affair was kept secret initially – but Picasso needed to honour this new love with his work. Guitar Hung on a Wall with Profile, 1927, is an encrypted portrait; he uses code to secretly declare his love: an “M” and “T” for his new lover and a more prominent “P” for himself. 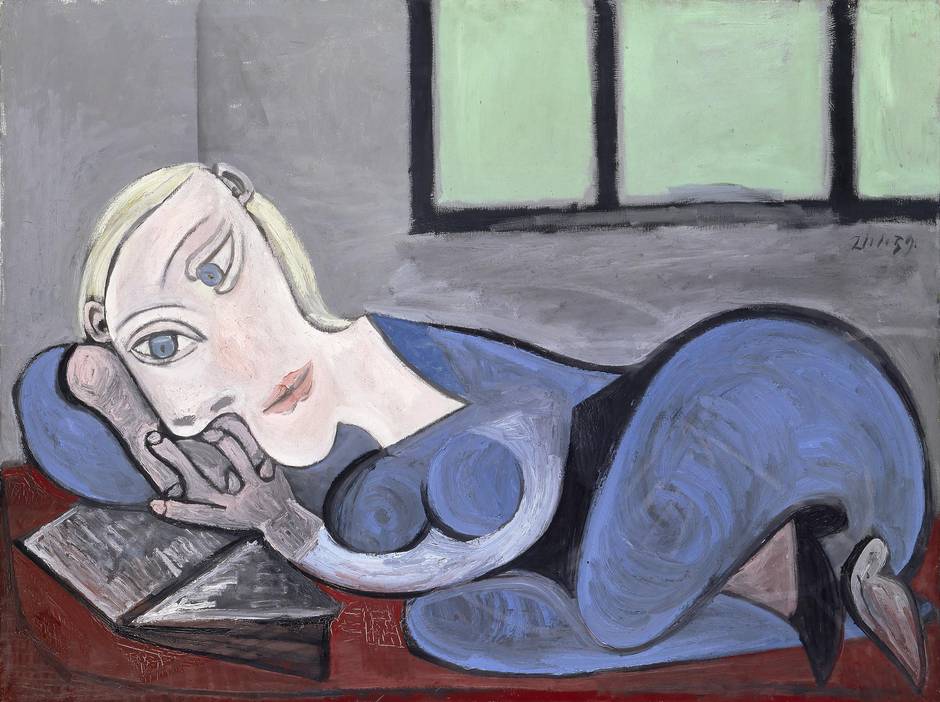 Reclining Woman Reading, 1939. A portrait of Marie-Thérèse Walter, who began an affair with Pablo Picasso when she was just 17 after they met outside a department store. (Picasso Estate/SODRAC)

The final work in the Walter section of the show is a stunner: Reclining Woman Reading, 1939, depicts his mistress (with whom Picasso by now had a daughter) as restful, comfortable. Her sexuality is toned down as she is curled up, quite literally, with a book.

Amazingly, that same day, Picasso painted a portrait of his next great love, Dora Maar. Maar (1907-1997) may be the best known of Picasso’s lovers, a Surrealist photographer who had an enormous impact on his work. The oil Bust of a Woman (Dora Maar), 1938, is one of the highlights of this exhibition. Weeping Woman, 1937, an etching on paper, is another.

Their most celebrated collaboration was the 1937 political masterpiece Guernica: Maar was an inspiration, his weeping woman, and she in turn famously documented the mural’s creation process. Some of this photography is shown in this exhibition, along with a reproduction of the mural.

Surrounded by dark world events – and a stormy relationship – Picasso’s portraits of Maar become increasingly more violent and disturbing. In angular paintings such as Portrait of Dora Maar, 1939, her nose becomes a snout, blood spurts from her eyes – this is the trauma of war represented in a woman’s face.

That relationship crumbled – as did Maar, who had a nervous breakdown – as Picasso took up with a new love, Françoise Gilot (b. 1921), a painter herself who would have two children with Picasso. Gilot and Picasso did not marry (he was still married to Khoklova) but they lived together until 1953, when Gilot left him – the only one of these women who did, driven away by his abuse, control and infidelities – as well as her desire to explore her own artistic practice. Approaching the age of 95, Gilot still paints every day.

The final section of the exhibition is devoted to Picasso’s second wife, Jacqueline Roque (1927-1986). They met in a pottery gallery in the south of France in 1953 and were together until his death in 1973. With Roque, Picasso was very prolific, creating hundreds of portraits, including the striking Nu assis dans un fauteuil (II), 1963 and Reclining Nude, 1964. Also during this period, he includes his own figure in some of his work, as in Le peintre et son modèle, 1963. 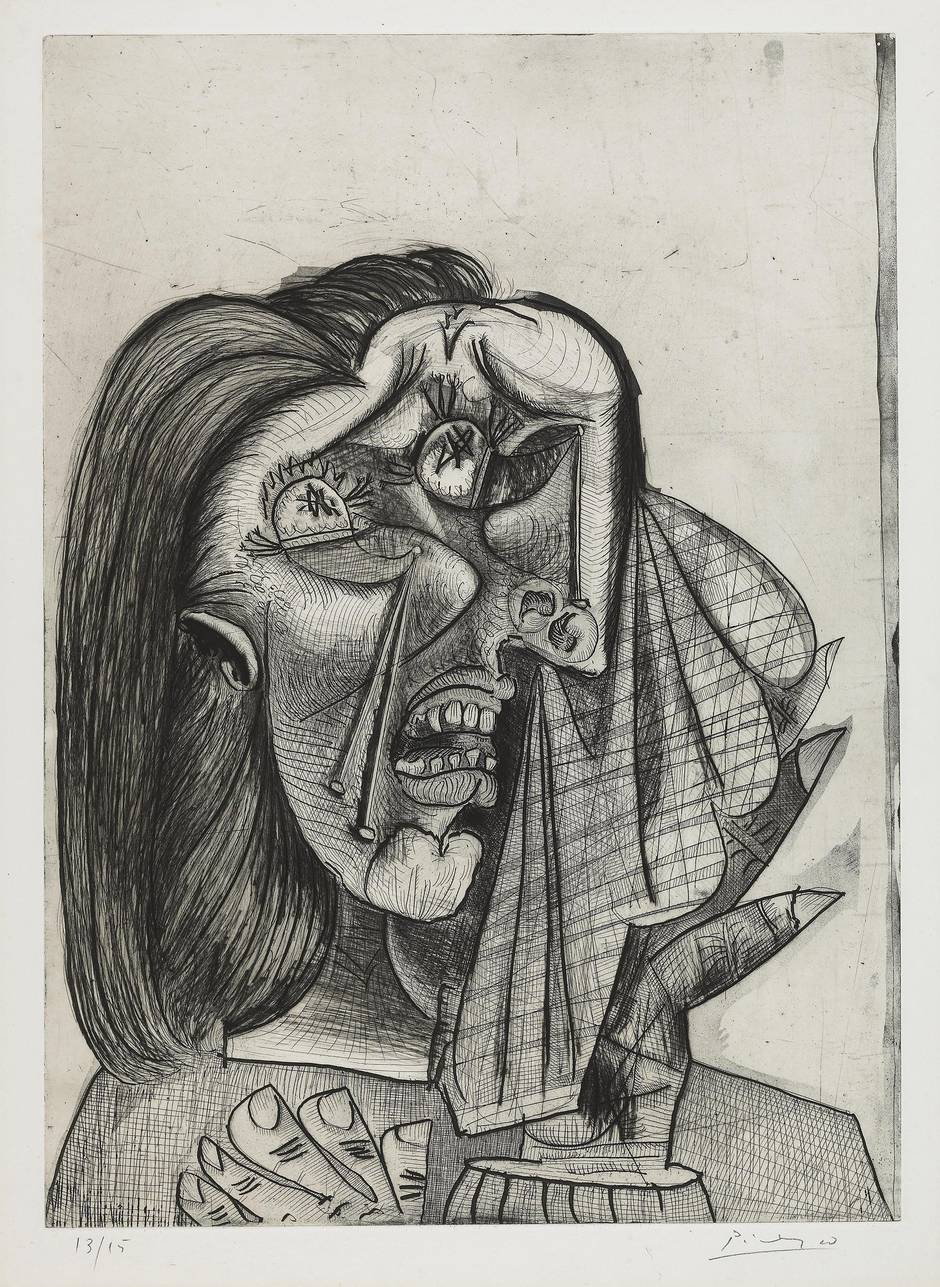 Left: Weeping Woman, 1937, is another portrait of Maar. (National Gallery of Canada)

The show is sure to be a summer blockbuster for the VAG. It is the largest Picasso exhibition ever mounted in Western Canada, he is arguably the most influential artist of the 20th century and Beisiegel’s take is smart – giving the women huge prominence.

Still, misogyny hangs in the air, as does tragedy: in addition to Maar, Khokhlova also suffered terrible psychological effects from Picasso’s treatment, Olivier was left destitute, Walter and Roque killed themselves after Picasso’s death and one of Picasso’s grandchildren, Pablito (grandson to Khokhlova), barred from attending the artist’s funeral by Roque, drank bleach – and later died as a result.

“He was a great, great artist,” says Beisiegel, “but maybe that did come with a price.”

Picasso: The Artist and His Muses is at the Vancouver Art Gallery until Oct 2.