Highway 20 heading into Montreal from Pierre Trudeau International Airport is not a pretty stretch of road. National Bank president and chief executive officer Louis Vachon, who drives the thoroughfare every day from his house in West Island, says it looks "like you're coming into a city in the Rust Belt" – not the kind of first impression he thinks the city should give to first-time visitors.

Instead of filing that observation away under Things Someone Should Do Something About, Vachon decided to take action. The result is an ambitious plan to install a $3.2-million public art work along six kilometres of the road, also known as Autoroute du Souvenir.

All of the money is coming from private sources, which is rare in Canada and exceptionally rare in Quebec. According to Statistics Canada, Quebeckers are by far the stingiest individual donors to cultural projects in the country – a dubious distinction that Vachon's initiative could do something to change.

Vachon persuaded his bank, and Quebec's Ministry of Transport, to go along with a juried competition for a piece that would both enliven Highway 20 and mark the 375th anniversary of Montreal in 2017. With help from the city's Public Art Bureau, Vachon appointed a jury that included architectural maven Phyllis Lambert, Musée d'art contemporain director John Zeppetelli and artist Stéfane La Rue.

The jury's choice for the commission was BLEU DE BLEU, a monochrome installation that will take various forms over its six-kilometre length. Artist Alain Paiement says his conception for the piece can be summed up in three words: "One blue line."

Actually, it will be many blue lines, dispersed along the route in the form of vertical polycarbonate lighting tubes, painted diagonal stripes on existing sound-dampening walls, and other elements still in the testing phase. Some of Paiement's blue lines will be based on bar-graph representations of sounds, including whale sounds and a Bach cello suite.

"It's very important that this not just be a piece of art that you pass, but that you experience it as a long trajectory," says Paiement, a well-established Montreal artist best known for his photo-based work. There will be a rhythm to the piece, which will change with natural lighting conditions, he says. The paint on the sound walls will be clearly visible during the day, less so at night, when the yellow sodium highway lights will make the blue look greyish. The tall polycarbonate tubes, lit by narrow LED projectors bouncing light off interior mirrors, will be luminous at night, more muted during the day.

The installation will include about 75 free-standing objects, all of which Paiement has designed and will build with an industrial designer and with Lumenpulse, a Montreal specialist in exterior LED fixtures. The wall designs will require more than 4,000 litres of paint, formulated to bond with the concrete. Every aspect of the piece is being tested and reviewed by the Ministry of Transport, which the artist says has been "very helpful and supportive."

The piece is intended to stay up for three to five years, though Paiement says he is hoping it will remain in place for much longer. The European-designed paint he is using has been known to stand up to the elements for nearly 100 years, he says.

Much of the money for the project is coming from National Bank, with substantial donations from private foundations. Two are connected to Richard Fortin and Alain Bouchard, co-founders of the Quebec convenience store chain, Alimentation Couche-Tard. Vachon said he had no interest in soliciting funds from government agencies.

"It has to be private," he says. "It's a gift for the 375th anniversary. It kind of defeats the purpose if you turn around and ask the taxpayers to pay for it."

Even more remarkably, there will be nothing along the six-km route to indicate that National Bank is the major sponsor: no signs, no logos, no nothing. Not even the colour alludes to corporate identity. National Bank's colour is red; two of its competitors use blue.

"My marketing people said, 'You're doing what?'" Vachon recalls with a laugh. Paiement, however, insisted from the beginning that the colour had to be blue, and the Transport Ministry agreed. Red, on a highway, is the colour of danger and emergency.

"Blue wavelengths are very dynamic and persistent, but not aggressive, unlike red or yellow," Paiement says. Blue on a highway is the colour of destination signs, and as such, he says, is associated with discovery. It's also the official colour of Quebec, and symbolizes the water that encircles the island of Montreal.

BLEU DE BLEU will be fully installed by the summer of 2017, though some test portions can be seen along the highway now.

It will be interesting to see what broader effect Vachon's initiative may have on the culture of giving in Quebec. Larger recent gifts for artistic projects have been made by individuals, including the $10-million lead gift given by mining executive Pierre Lassonde for the new museum pavilion in Quebec City that bears his name. But total private funds for that addition to the Musée national des beaux-arts du Québec amounted to less than one-quarter of the $106.5-million cost. All the rest came from public sources, in a province where individual giving to the arts is one-half of the Canadian average.

As of next summer, hundreds of thousands of Montrealers travelling Highway 20 will have a daily reminder of what can happen when private donors decide to make a difference, even without government help. Count Paiement among those won over by Vachon's full-speed-ahead commitment to the project.

"I'm so impressed by his vision and audacity," Paiement says. "Especially from someone in the banking business." 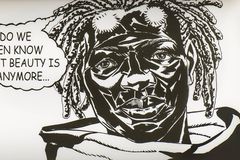 Follow Robert Everett-Green on Twitter @RobertEG_
Report an error
Due to technical reasons, we have temporarily removed commenting from our articles. We hope to have this fixed soon. Thank you for your patience. If you are looking to give feedback on our new site, please send it along to feedback@globeandmail.com. If you want to write a letter to the editor, please forward to letters@globeandmail.com.
Comments