Instantly magnetic and powerfully sculpted – there's pure design joy to be found at the Regent Park Aquatic Centre. Another reason I hold the centre in high esteem? Its disarming integrity. What might have been interpreted merely as the tank to hold a pool has been upgraded to a City of Toronto facility that embraces all ages as well as the highest aspirations of our collective society. That's an optimistic way to kick off the fall season of design.

A muscular body of transparency and tolerance, the Aquatic Centre, clad in strips of cedar and panels of black zinc, communicates like a beacon of enlightened change within Regent Park, the 69-acre (28-hectare) experiment in postwar social housing that achieved punishing isolation and is now being rebuilt and seamlessly integrated into Toronto's east-central housing market. Seen from a distance, just east of Parliament Street, the $14.8-million centre thrusts an enormous knot-free cedar canopy toward Dundas Street, offering shelter from the elements and helping to rescue the neighbourhood – brilliantly – from decades of marginalization.

Inside, the Aquatic Centre has changed some old rules of swimming-pool conduct – for the better. The segregation of males from females no longer applies. Instead, white, airy change rooms equipped with private cubicles accommodate all visitors, so that families with young children can change together. Barriers of nonconformity have been dismantled so that transgendered people are welcomed. Swimmers will shower together, obviously with bathing suits still on.

New levels of accommodation – a celebration of civic tolerance – for religious and cultural differences have also been permanently integrated into the Aquatic Centre. Women with an interest in swimming without men can book the centre and arrange to have opaque window screens pulled down tight; local city councillor Pam McConnell insisted on them.

Accommodation of a different kind comes in the form of ramps that invite people with physical challenges to move from their wheelchairs onto wet chairs and then descend gently into the hot tub or leisure tank.

Do not confuse sensitive design gestures with less fun. At the deep end of the six-lane lap pool, there's a waterslide that channels gently onto the deck; a diving board; and a Tarzan rope that hangs off a monumentally high ceiling. Fountains cascade over the children's play pool; next to that are long bubble benches in a leisure pool to massage the backs of tired parents.

All this is a far cry from the facility's original and more banal plan. Back in 2005, a single-tank pool was to be added onto nearby Lord Dufferin School. But, the following year, the City of Toronto's aquatic working group concluded that single tanks offered little in the way of enduring public appeal. A facility that combined fitness with fun was envisioned and, because the Toronto Community Housing Corp. offered to provide a large plot of parkland for a much bigger, 28,000-square-foot aquatic centre, the vision was dramatically upgraded. The city's Parks, Forestry and Recreation division, led by its manager, Douglas Giles, not only promoted the centre's sophisticated policies of inclusion; they defended its architecture, refusing to nickel-and-dime the project. All of the black matte Anthra-Zinc dry-joint panelling and the cedar decking was approved, as was the wood ceiling that hovers graciously above the circulation corridor leading to the universal change rooms.

MacLennan Jaunkalns Miller Architects (MJMA) have been designing aquatic facilities for over 20 years, but none as visually commanding as this one. In lesser hands – and elsewhere – this might have been a Chuck E. Cheese version of aquatic hysteria: a crazed combination of cheap materials and colours. Instead, a modern minimalism has been expertly defended by MJMA's principal and the centre's design lead, David Miller. Within the pool hall, that means almost everything is white, except for the black lane lines and black-tiled monolithic benches for parents whose kids are frolicking in the pool. Very clear. Very cool. A roofing deck of cedar brings a warm aesthetic while providing material that is naturally resistant to the corrosive air caused by chlorine-treated indoor pools.

"It was conceived as a transparent pavilion in the park," says Miller. The volumes are simple and refined – the long pool hall is bumped up with skylights on its eastern flank, while, to the west, the facility angles down toward the park. Below a rooftop of greenery, there's a long stretch of eight-foot-wide windows that can be slid open to allow swimmers to wander outdoors and then jump back into the pool. That might be standard practice in the aquatic centres of Europe but in rule-bound Toronto, it's a huge concession on the part of pool staff. But there's a culture of yes at work here. As pool manager James Honeyman said during my recent tour of the nearly completed centre: "It'll be new, but bring it."

The Regent Park Aquatic Centre opens to the public in October. The price of admission: $5.50 for families; $3 per adult; free to those who qualify for social assistance, in accordance with the City of Toronto's welcome policy. For more on great design ideas from around the world, follow Lisa Rochon's blog, chasinghome.org 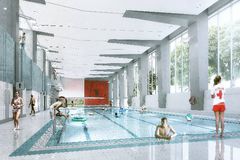 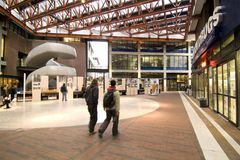 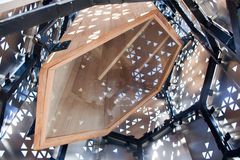