The corruption of the art world is one of the principal themes for contemporary visual art: Every second gallery show seems to be an expression of revulsion or cynicism about art and commerce. It's a little boring for those outside the industry, but it's understandable: The rise of art as investment commodity for the ultra-wealthy does seem to distort the process of art-making and -selling for everyone else. A painting was sold last week for $300-million (U.S.), probably to the feudal sheikdom of Qatar; meanwhile across the board, artists' real incomes are declining. It is rather confusing.

So, any discussion of the monetary worth of art objects quickly whips up a frustrated rage among actual artists. I saw this recently on Facebook – a Toronto gallerist recently boasted, casually, that he had sold a large Canadian canvas for six figures, and his circle of artist followers became quickly caustic on his thread about the propriety and relevance of such a success. The fact of the sale seemed to make a number of people very angry. (It's not dissimilar to how novelists feel about massive advances shelled out for commercial work that is unlike their own.)

The latest face-smacking outrage in the smoke-and-mirrors world of art sales just happened last week: That $300-million painting is an 1892 Gauguin called When Will You Marry? It is of a pretty pair of Tahitian women, done with his typical colourful simplicity. It has set a new record for the highest price ever paid for a painting. It was sold by a Swiss collector called Rudolf Staechelin, and although he will not confirm the identity of the buyer, The New York Times quotes confidential sources who acknowledge that the state museums of Qatar are behind the purchase. These museums are owned by the ruling Al Thani family; they were also behind the last world-record-setting price for a painting ($250-million for a Cézanne in 2011). The Gauguin had been on display in the Kunstmuseum in Basel, Switzerland, for the past 50 years, but the owner decided he had to retrieve it because, well, $300-million.

There are a number of frankly puzzling aspects to this story. First, why Gauguin? Second, why Qatar? Economists puzzle over these questions but art critics, not so much: We just shrug our shoulders. The question of the value of art collectors' investments is purely a business one, not an aesthetic one. The list of the top-10 highest-priced paintings ever sold provides no real elucidation as to why certain artists become so very valuable and others don't. The list includes a Renoir, a Picasso, a Pollock, a de Kooning, a Klimt and a Bacon – so, a mix of highbrow modernists and popular, pretty pictures. The sale price is really determined only by previous sale prices; in other words they are valuable only because someone paid a lot for them in the past. It's a logical Moebius strip: They are valuable because they are valuable. These values are controlled by dealers and collectors who conspire to inflate the prices and keep them where they are.

Paul Gauguin, for example, was not very famous in his lifetime; the value of his paintings grew so excessive long after his death. And of course part of his mystique comes from his being – paradox of paradoxes, for the iron-fisted, sharia-law rulers of Qatar! – antisocial, libertine, depressive and defiant. His whole Tahitian adventure is now seen as highly romantic because it was antimaterialist; it was also morally queasy-making from the beginning, since he left his wife and five children to go there, and had several very young (i.e., teenage) mistresses while there. He died, weakened by alcohol and possibly syphilis, of a morphine overdose.

Now, because of the unimaginable value of his paintings, he is somehow associated with class and luxury. Last week, just outside Basel, the actor Keanu Reeves gave a lecture at the Fondation Beyeler, where the painting is on display until June 28. Reeves read to a sold-out crowd from Gauguin's diaries and reflected on his own Polynesian heritage. The bohemian painter's leap from thatch hut to Hollywood jet set is now complete.

We don't know where the $300-million work will reside, or if it will be on view for the public. One can be sure the indentured labourers kept in near imprisonment by many Qatari construction projects probably have little time to visit. The Qatari royal family have made it their mission to collect as much of the important art in the world as they can; they have sophisticated tastes, and have amassed valuable Islamic art both antique and modern, and challenging Western contemporary art such as works by Damien Hirst and Louise Bourgeois.

Qatar is the world's biggest art buyer. The Al Thani family has been able to almost single-handedly push up global art prices because of its willingness to pay more for any given work than anyone expects. One of them, the late Saud bin Mohammed Al Thani, was accused of spending recklessly and compulsively on art that he could not actually afford, and was put under house arrest in 2005 after he could not pay a $20-million bill.

It is impossible to distinguish, in an absolute monarchy like this, between family money and state money, so one can't say if these are private collections or if they belong to the people of Qatar (and their immigrant slaves). The questions of the Al Thanis's motivation is also impossible to answer: Do they do it out of a love of art, a desire to provide an educational experience for their populace, as economic investment or as simple competition – out of a primal desire to own the best of everything so that no one else can?

Only one concrete effect of this transfer can be predicted: It will almost certainly stimulate, in the university galleries of the West, another endless round of earnest installations about the art-killing effects of capitalism. 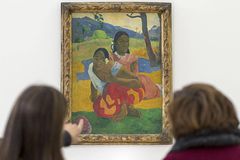 Henry Pearlman’s passion on show in Cézanne and the Modern
February 13, 2015 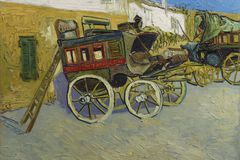 Mega TV-montage The Clock debuts in the West at the Art Gallery of Alberta
February 12, 2015 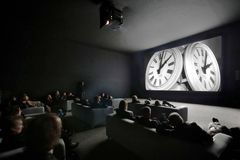 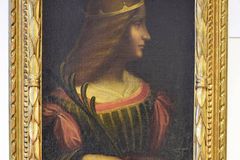