A sprawling outdoor concrete installation by one of the world's most famous living sculptors, New York's Richard Serra, is going to be designated a site of "cultural heritage value" by the Ontario municipality in which the work, called Shift, is found.

Councillors for the Township of King, located about 50 kilometres north of Toronto, voted 4-1 Monday evening to prepare a bylaw for the designation, which prevents destruction or alteration in perpetuity under the Ontario Heritage Act. Rookie councillor Avia Eek said at the Monday meeting: "We would be culturally ignorant idiots" not to recognize the Serra's artistic and cultural significance. The work – six unadorned walls, each 20 centimetres thick and 1.5 metres high, zigzagging over about five hectares of rolling farm land – was completed in 1972 as a commission when Serra, one of the founders of the minimalist art movement, was just 32. While largely obstructed from public view, it has since been visited on foot, ski and snowshoe by thousands of trespassing art lovers and curiosity-seekers.

Eek and her colleagues took the designation action over the long-standing objections of the developer, Toronto-based Hickory Hill Investments, that has owned the land on which Shift is situated for more than 35 years. Representatives from Hickory Hill did not speak to councillors Monday and had earlier sought a deferment of the vote, a request declined by councillors. But in an e-mail letter to the township dated Feb. 25, counsel for Hickory Hill repeated its view that assigning Shift cultural heritage value was "inappropriate and unnecessary" for "a private piece of art on private property." The developer has long insisted it will always "ensure [ Shift's] its preservation," not least because it's protected by the Oak Ridges Moraine Conservation Act.

Monday's vote was the second time the township has approved an intention to designate. In late November, 2009, councillors, acting on various initiatives from local heritage committees and historical societies dating as far back as 2004, voted 6-1 to make Shift a protected cultural landscape. But after Hickory Hill, which had development plans for land near the sculpture, announced it would appeal that intention before the Ontario Conservation Review Board, if required, the township and the developer entered into protracted discussions to reach an agreement.

Nothing came of these and in August last year the CRB convened a hearing for the Hickory Hill appeal. In a report published in mid-October, the CRB recommended that Shift, while meeting many of the criteria for designation under the Ontario Heritage Act, not be protected. It said the work's lack of visibility and public accessibility on privately owned land meant it didn't have sufficient "community context" or "associative value." Councillors Monday, however, decided to override that interpretation, noting a municipality can designate a property if it meets only one of nine criteria included in regulations governing cultural heritage value.

Fiona Cowles, former chair of the Township of King heritage committee, called council's decision to draft a bylaw "only a stepping stone." Designation "gives [Shift] a sort of legal stance in the heritage framework," she said. But "what we need next from the township is a bylaw that will allow building standards to be applied to the piece so that if it needs repair and maintenance the township is in the position to do something about it."

Another discussion likely will be over "how to achieve some form of public access," Cowles said, even if "it's just in a very limited form initially … Obviously you just can't have people tramping through the field." To date, Hickory Hill has resisted easy access to the site. In its Feb. 25 letter, it notes Shift "continues to be on private property [and] only accessible with express permission from the owner." Signs stating this have been erected in recent years and without permission, a visitor "is committing trespass."

Fight waged over Richard Serra sculpture in field north of Toronto
May 1, 2018 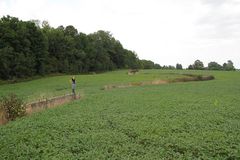 Fate of five-hectare Richard Serra sculpture could be decided next week
April 28, 2018
King Township councillors vote to save Richard Serra installation
May 1, 2018
Follow James Adams on Twitter @Jglobeadams
Report an error Editorial code of conduct
Due to technical reasons, we have temporarily removed commenting from our articles. We hope to have this fixed soon. Thank you for your patience. If you are looking to give feedback on our new site, please send it along to feedback@globeandmail.com. If you want to write a letter to the editor, please forward to letters@globeandmail.com.
Comments