A shocking exhibition about how the architecture of Auschwitz enabled the horrors of the Nazi death camp is coming to Toronto. The Royal Ontario Museum will soon announce that it has snagged it for a seven-month run from June 24 to Jan. 28.

Reaching the public in Southern Ontario is a homecoming for The Evidence Room. Created at the University of Waterloo for the 2016 Venice Biennale architecture exhibit, it was on display for six months from late May to late November.

"I received an invitation in July, 2015, from Alejandro Aravena, the curator of the 2016 architecture Biennale," says Robert Jan van Pelt, a Waterloo professor of architecture.

In photos: The Evidence Room exhibit

Mr. Aravena is a Chilean architect known for transforming slums, for which he was awarded architecture's most prestigious honour, the Pritzker Prize, for making architecture a tool of justice and social change.

Mr. Aravena had a list of 85 architects on his could-call list. The reason for his choice was that Prof. van Pelt had written a book called The Case for Auschwitz.

In 2000, Prof. van Pelt's testimony was a key factor in a libel suit in which the false assertion that Auschwitz had no gas chambers and the Holocaust had never happened played a central role. The book based on his testimony was published in 2002.

Now there is another book, The Evidence Room, written by Prof. van Pelt and three colleagues – Donald McKay, Anne Bordeleau and Sascha Hastings – to supplement the exhibition.

"It is difficult to imagine the details of a gas chamber, where humans were locked in to die," says one Holocaust survivor, quoted in the new book. Published by New Jewish Press, a Toronto firm, it will be available at select bookstores during the ROM run.

"One has to feel the double grates that protected the bucket filled with poison pellets from the desperate hands of the condemned, peer into the bucket, imagine the pellets melting away, the poison oozing out of them," says the survivor. "Only then can real awareness arise in the soul and place the viewer inside the gas chamber."

Most people are aware of the Holocaust, but to be taken inside the obscene killing machine is by all accounts an overwhelming and unforgettable experience. The Nazis killed about six million Jews, including three million in gas chambers (one million in Auschwitz and two million elsewhere).

"I touched the gas column – a reproduction of the device that inserted Zyklon B into the gas chambers at Auschwitz," says the same witness to the 20th century's worst nightmare. "As a Holocaust survivor, I felt the cold hand of history on my spine. I knew a good deal about the Auschwitz-Birkenau murder factory, but the gas column really shocked me. Because of what I had read about people thinking they were going into a shower room, I had always imagined the gas being dispersed by sprinklers. Touching that construction had a profound effect on me – a new visceral recognition all these years later."

The plans behind the killing machine are at once simple and obscene. The designers, engineers and architects who created it came up with a cheap and shocking solution.

The exhibit provides a reconstruction of the steel mesh gas column through which the Zyklon B pellets were lowered into the chamber. Viewers also examine a reproduction of original architectural drawings. Among the details: the door of the gas chamber with a tight seal around the edge.

The entire exhibit is in white, the colour of innocence, which contrasts with the blackness of the evil subject matter.

The most compelling feature of the exhibition is its tactile character, says a survivor of the death camp at Dachau.

"By removing colour, sound and interpretation from The Evidence Room, we are forced to rely on touch to elicit its meaning." 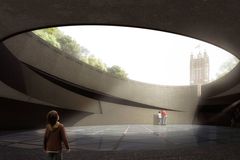 Holocaust survivor tells real story behind The Zookeeper’s Wife
April 6, 2017
Follow us on Twitter @globearts Opens in a new window
Report an error Editorial code of conduct
Due to technical reasons, we have temporarily removed commenting from our articles. We hope to have this fixed soon. Thank you for your patience. If you are looking to give feedback on our new site, please send it along to feedback@globeandmail.com. If you want to write a letter to the editor, please forward to letters@globeandmail.com.
Comments